Simple program that can parse Google Protobuf encoded blobs (version 2 or 3) without knowing their accompanying definition. It will print a nice, colored representation of their contents. Example: 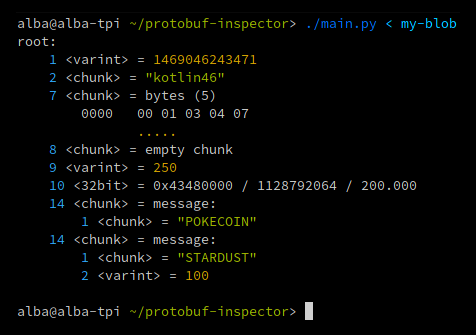 As you can see, the field names are obviously lost, together with some high-level details such as:

But protobuf-inspector is able to correctly guess the message structure most of the time. When it finds embedded binary data on a field, it'll first try to parse it as a message. If that fails, it'll display the data as a string or hexdump. It can make mistakes, especially with small chunks.

It shows the fields just in the order they are encoded in the wire, so it can be useful for those wanting to get familiar with the wire format or parser developers, in addition to reverse-engineering.

You can install with pip:

This installs the protobuf_inspector command. Run it, feeding the protobuf blob on stdin:

After reading the first (blind) analysis of the blob, you typically start defining some of the fields so protobuf-inspector can better parse your blobs, until you get to a point where you have a full protobuf definition and the parser no longer has to guess anything.

If a parsing error is found, parsing will stop within that field, but will go on unaffected at the outside of the hierarchy. The stack trace will be printed where the field contents would go, along with a hexdump indicating where parsing was stopped in that chunk, if applicable.

So, if you specified a uint32 and a larger varint is found, you'd get something like: 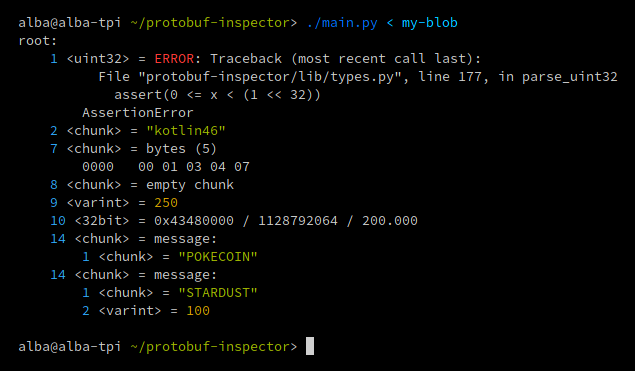 If you specified that some field contained an embedded message, but invalid data was found there, you'd get: 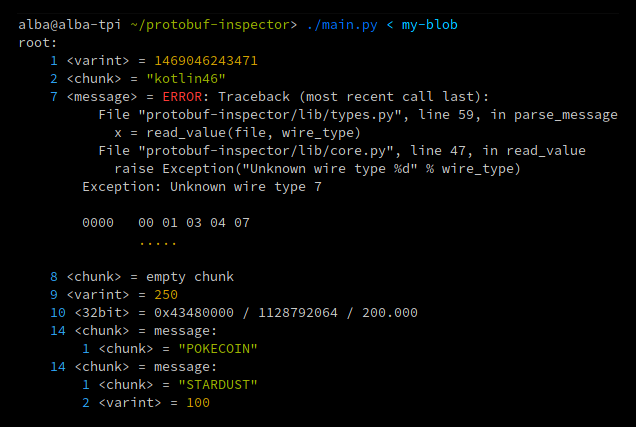 Please note that main.py will exit with non-zero status if one or more parsing errors occurred.

There are some tricks you can use to save time when approaching a blob:

This project was not initially designed for use as a library, though, and its API might change. For a more complex example, see protobuf_inspector/__main__.py.