I saw the Logitech Spotlight device in action at a conference and liked it immediately. Unfortunately as in a lot of cases, software is only provided for Windows and Mac. The device itself works just fine on Linux, but the cool spotlight feature is done by additional software.

So here it is: a Linux application for the Logitech Spotlight. 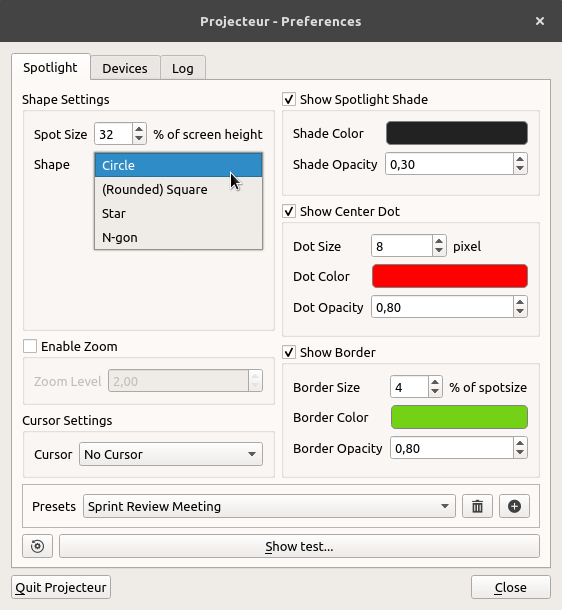 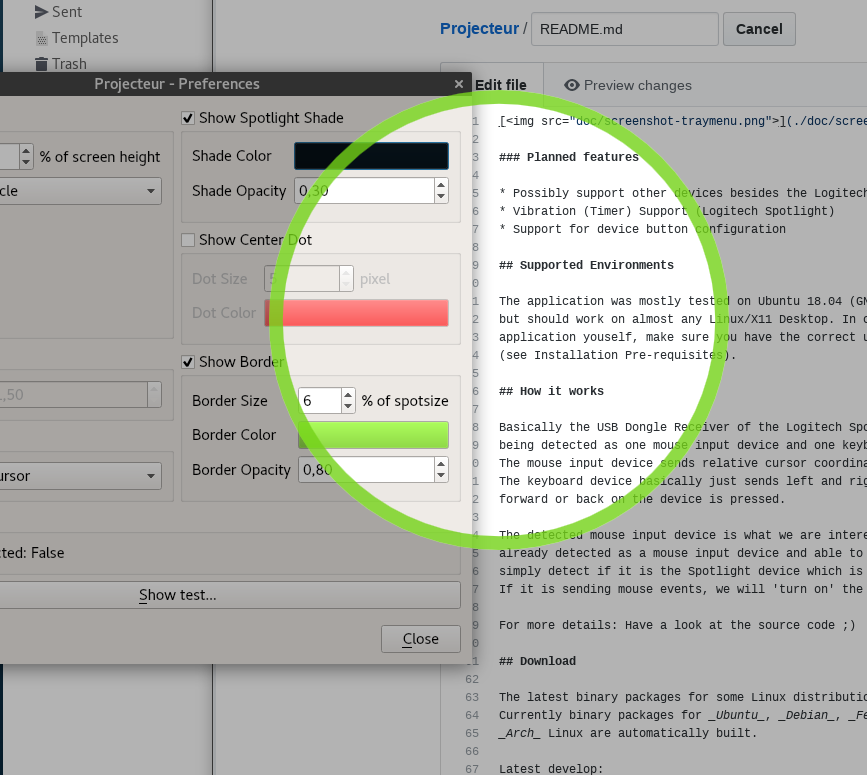 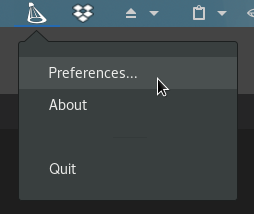 The application was mostly tested on Ubuntu 18.04 (GNOME) and OpenSuse 15 (GNOME) but should work on almost any Linux/X11 Desktop. In case you are building the application youself, make sure you have the correct udev rules installed (see pre-requisites section).

With a connection via the USB Dongle Receiver or via Bluetooth, the Logitech Spotlight device will be detected by Linux as a HID device with mouse and keyboard events. As mouse events the device sends relative cursor movements and left button presses. Acting as a keyboard, the device basically just sends left and right arrow key press events when forward or back on the device is pressed.

For more details: Have a look at the source code ;)

This version implemented a virtual device by default (You can still disable it with the --disable-uinput command line option). Projecteur will now grab all device events and forward it to the virtual 'uniput' device. While this does currently not change any behavior or feature from v0.6, this prepares Projecteur for the planned button mapping feature.

Note: You can omit setting the QTDIR variable, CMake will then usually find the Qt version that comes with the distribution's package management.

When building Projecteur yourself

The input devices detected from the Spotlight device must be readable to the user running the application. To make this easier there is a udev rule template file in this repository: 55-projecteur.rules.in

Additional to the standard --help and --version options, there is an option to send commands to a running instance of Projecteur and the ability to set properties.

All the properties that can be set via the command line, are listed with the --help-all option.

Besides the Logitech Spotlight, similar devices can be used and are supported. Additional devices can be added to devices.conf. At CMake configuration time the project will be configured to support these devices and also create entries for them in the generated udev-rule file.

Projecteur will also accept devices as supported when added via the -D command line option.

This will enable devices for Projecteur, but it is up to the user to make sure the device is accessible (via udev rules).

On some distributions that have a GNOME Desktop by default there is no system tray extensions installed (Fedora for example). You can install the KStatusNotifierItem/AppIndicator Support or the TopIcons Plus GNOME extension to have a system tray that can show the Projecteur tray icon (and also from other applications like Dropbox or Skype).

Zoom is not updated while spotlight is shown

While not developed with Wayland in mind, users reported Projecteur works with Wayland. If you experience problems, you can try to set the QT_QPA_PLATFORM environment variable to wayland, example:

Device shows as not connected

If the device shows as not connected, there are some things you can do:

This project is distributed under the MIT License, see LICENSE.md for more information.