This Slack bot improves the workflow of development teams. Especially with focus on Jenkins, Github, Gitlab and Jira, as the integration is working out of the box. But also custom commands, macros, crons and other project specific commands can be implemented in a simple and flexible way.

Alternative: Manual steps when not using the App Manifest

As slack user, you just have to send a private message to the bot user/app containing the command to execute. Additionally you can execute bot commands in channels by prefix your command with @bot_name, e.g. @slack-bot start job DailyDeployment

Note: You have to invite the bot into the channel to be able to handle commands.

The help command just prints a list of all available commands of this bot. With help *command* you'll get a short description and some examples for a single command. 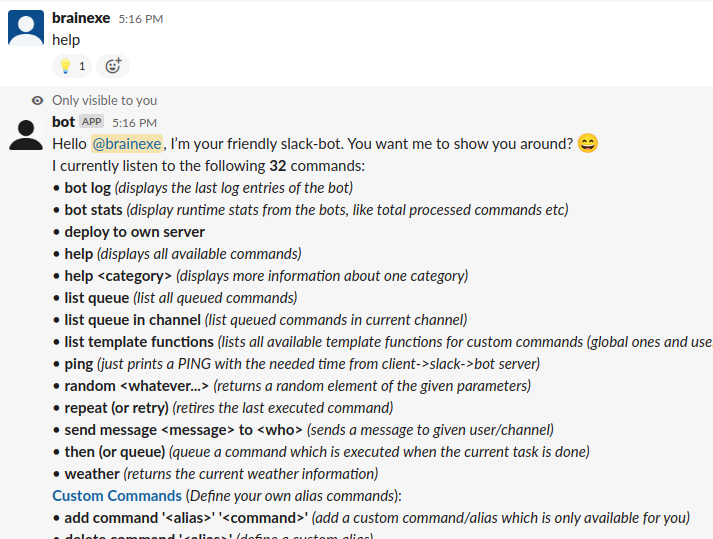 The bot is able to start and monitor jenkins job on a simple but powerful way.

By default the commands are not available and not visible in the "help", till the "jenkins.host" is defined in the config file.

The start job command starts a Jenkins job and shows the current progress. Attention: only whitelisted jobs in the config are startable!

In additions each job can have a configurable trigger which make it possible to create custom commands to start jobs. (it's a regexp which takes parameter names into account). E.g. "start daily deployment" could be the trigger for one jenkins job. Sending this text to the bot would start he job.

After starting a job the bot will show the estimated build time and some action buttons. There you can open the logs or abort the build directly.

The bot has also the possibility to create one time notifications for jenkins builds. This might be useful for long running jobs where the devs is waiting for the result.

Receive slack messages for all process builds for the given job:

Small command to disable/enable job execution on Jenkins side.

When a build failed you are able to retry any build by:

jenkins nodes lists all available Jenkins nodes. The online/offline status and number of executors are visible. 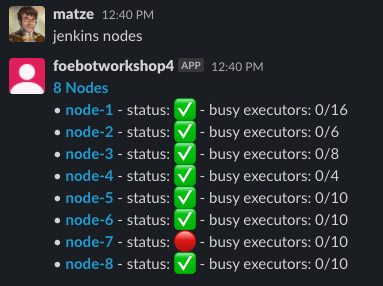 If you just paste a link to a Github/Gitlab/Bitbucket/Stash Pull request, the bot will track the state of the ticket!

You're also able to set custom "approved" reactions. E.g to see directly who or which component/department approved a pull request you can use the name of the reaction or the Unicode character directory

Extra Features: For Bitbucket the bot is able to extract the current build status (e.g. from Jenkins/Bamboo etc) and show failed and running builds (fire reaction) as a reaction (circle arrow reaction). When the build is stable, the build reactions disappear.

The queue command (with the alias then) is able to queue the given command, until the currently running command finished.

Example following scenario: you have a build job (which might take some minutes) and a deploy job which relies of the build artifacts. Now you can do:

To see all running background commands (like Jenkins jobs or PR watcher) use this command:

The bot is able to query information from Jira, either from a single ticket, or a whole list of tickets.

By default the commands are not available and not visible in the "help", till the "jira.host" is defined in the config file. 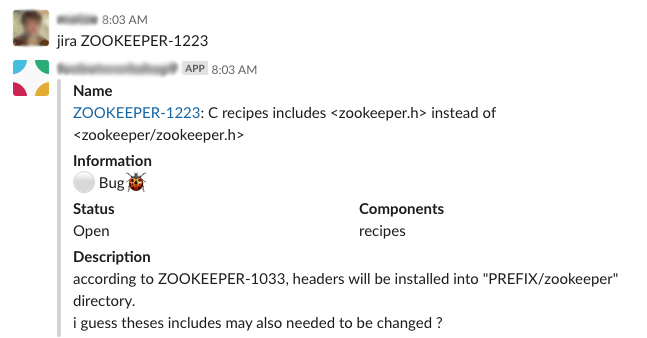 It's also possible to get a notification when there is a state change in a certain Jira ticket.

It's possible to create buttons which are performing any bot action when pressing the button. Slack interactions 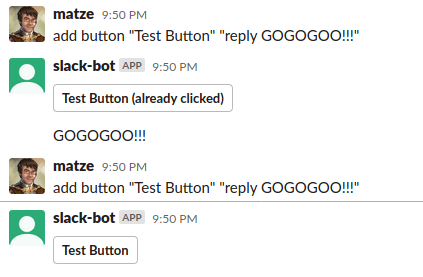 Configure user specific variables to customize bot behaviour. E.g. each developer has his own server environment.

Example: Having this global config:

Each developer can now call ONCE this commands like: set variable defaultSerer foobarX.local to register the custom "defaultServer".

When now calling deploy mater, it will deploy the master branch to foobarX.local server.

Another example Here an advanced version which uses Go templates. In the end the command will generate one subcommand, like: reply <!here> demo for <https://jira.example.com/TEST-1234|TEST-1234: Example-Ticket> which will post the link to the Slack channel.

User can define his default environment once by using set variable serverEnvironment aws-02.

Then the deploy feature-123 will deploy the branch to the defined aws-02 environment. Each user can define his own variables.

If you need a small break and want to play a little quiz game you can do so by calling this command. No more than 50 questions are allowed. The questions are from different categories and difficult levels and are either multiple choice or true/false questions.

It's possible to setup OpenWeatherMap to get information about the current weather at your location.

Every user is able to define own command aliases. This is a handy feature to avoid typing the same command every day.

Defined "Commands" (former called "Macros") are very magical and can be defined in the yaml configuration files.

They have a trigger (a regular expression) and have a list of sub commands which will be executed. They take parameter groups from regexp into account - so they can be very flexible!

One simple example to start two Jenkins jobs with a given branch name at the same time: 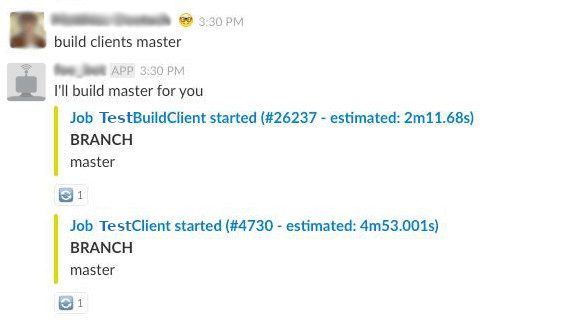 Note: In the commands you can use the full set of template features of go -> loops/conditions are possible!

Beside the usual template features of go a bunch of bot specific commands are available in the template scope.

A list of all available functions (with arguments and return types) can be generated by using the list template functions command. 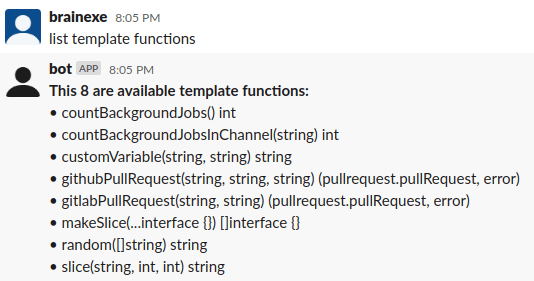 Note: This template functions can be used in different commands/features:

With retry or repeat your last executed command will be re-executed. -> Useful when a failed Jenkins job got fixed.

A small command which might be useful in combination with command command or as hook for jenkins jobs.

As reply you'll get a command to stop the queued job (like stop timer 123456). As everyone can send the command, the command can be used to announce a deployment and in doubt, the execution can still be stopped by everyone.

reply and send message are also small commands which are useful in combination with command or jenkins hooks.

This command will start the bot, using the config.yaml file by default. Use the -config argument to use the config file(s) from another location.

The configuration is managed via simple .yaml files which are storing the credentials for the external services and the custom commands etc.

The easiest way is to just have one config.yaml file with all needed options included the config.yaml is loaded by default. It's also possible to split up the configuration into multiple files.

To load the multiple config files, use go run cmd/bot/main.go -config /path/to/config/*.yaml which merged all configs together.

To run this bot, you need a "bot token" for your slack application. See the installation section how to create a proper app with the needed tokens.

To be able to start or monitor jenkins jobs, you have to setup the host and the credentials first. The user needs read access to the jobs and the right to trigger jobs for your whitelisted jobs.

To be able to start a job, the job and it's parameters have to be defined in the config.

A job without any parameter looks very simple:

Then you can use trigger job CleanupJob or start job CleanupJob to start the job. It will also notify you when the job succeeded or failed (incl. error log).

Next a job with two parameters:

This job can handle two parameters:

If you setup the VSC in the config, you don't have to pass the full branch name but can use the fuzzy search.

Step by step: The trigger is a regular expression to start the job which may contain named groups. The regexp groups will be matched to the job parameters automatically.

Then you can use deploy bugfix-1234 to test to start the jenkins job.

Note: You can always start this job also via start job DeployBranch master. The trigger is just an alternative.

The onsuccess is a hook which will be executed when a job ist started via this bot. In addition onsuccess and onerror is also available...e.g. to send custom error messages.

It's possible to define periodical commands via crons, using the robfig/cron library.

To be able to resolve branch names in jenkins trigger, a VCS system can be configured (at the moment it's just Stash/Bitbucket).

If no config is provided, there is no automated branch lookup and the "branch" parameters are passed 1:1 to the jenkins job.

If you need a new command, which is not implementable with a "command" command, you have to write to write go code.

There is a handy CLI application which emulates the Slack application...just chat with your local console without any Slack connection! 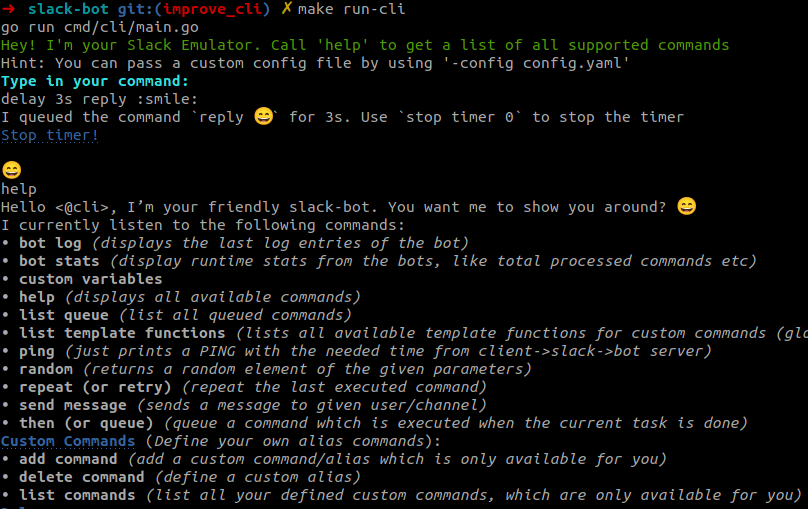 make air to use the "air auto reload tool".

There are a bunch of tests which can be executed via:

Test coverage is generated to build/coverage.html