The Open-Source IO Shooter is an open-source multiplayer game in the browser (desktop or browser). It is meant to be hostable and playable by anyone. This is not an attempt at creating an outstanding gaming experience, but to create an easily understandable and modifiable multiplayer browser game. 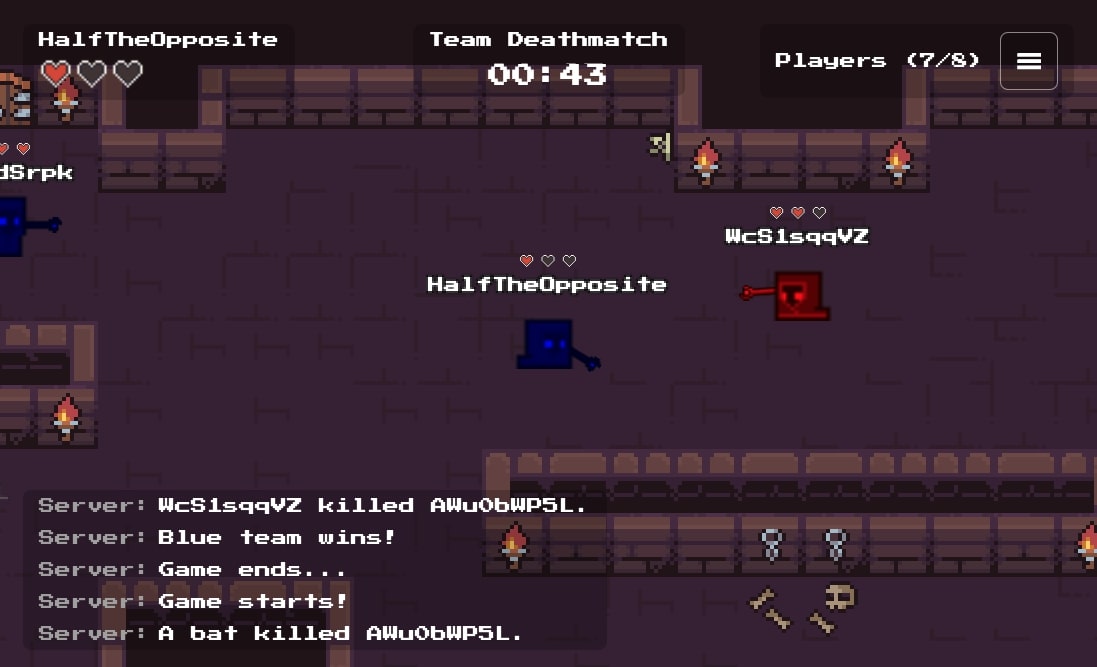 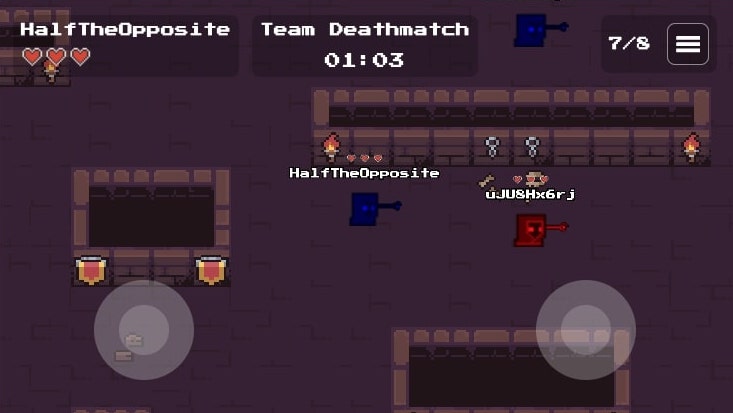 Want to play right away? You can play the game by following (and sharing) this link https://tosios.online/ (or https://tosios-demo.herokuapp.com/).

The game principles are fairly easy to grasp:

You can see a very small amount of gameplay below (the framerate of this GIF is low):

You can build this game yourself easily if you are experienced with modern javascript development or Docker.

The up option will download the image if you don't have it yet and run the container.

The -d option will run the container in the background.

You can also build the Docker image yourself:

The -d option will run the container in the background (recommended if you want to have access to your current terminal session).

The -p option will let you choose on which port the container will listen (e.g. the first 3001 will make it accessible to http://localhost:3001), and on which internal port must the server listen (e.g. the second 3001).

The [IMAGE_ID] is easily discoverable by running docker images in the terminal.

You can also build the game directly using yarn (you cannot use npm install as this repo is using the workspace feature of Yarn):

If you want to play with friends at work or home, you can run the following command to get your local network IP: ipconfig getifaddr en0. You can then share the obtained IP and port(ex: http://192.168.1.10:3001).

To run the project in development:

If you encounter a white screen the first time you try to load the game in the browser, that's normal, just refresh the page. This is due to the order in which things are built the first time at launch.

In development, the front application is NOT served by the server, thus requiring you to access it through port 3000 instead of 3001 as seen before.

In development changes made to client and server are live, except for the common module.

This project is a monorepo (with the help of Yarn workspaces). It contains the following packages:

Anyone can create their own map to use in TOSIOS.

How to create my map?

The maps available in TOSIOS have all been created thanks to Tiled Map Editor (TME). You must first download this software in order to start creating your own map. I also invite you to read some tutorial for an easier beginning.

The most important concepts to create a functional map are layers and tilesets (I invite you to open one of the existing map in TME to familiarize yourself with how maps are structured. It will make things 10x easier if you have a living example under your eyes).

A layer is where your tiles are placed to form a map. You can combine multiple layers on top of each other so that you can get a crate over a ground tile, or a spider web over a wall for example.

There are two reserved layers that should be present at all time (although not rendered):

Other than that, you can add as many layers as you want and they will be rendered by PIXI.js in a WYSIWYG manner (order is maintained).

Although in the dungeon.png spritesheet I use colored tiles to represent collisions (red and blue) and spawners (green), you can use any tile you want as it won't be rendered anyway. 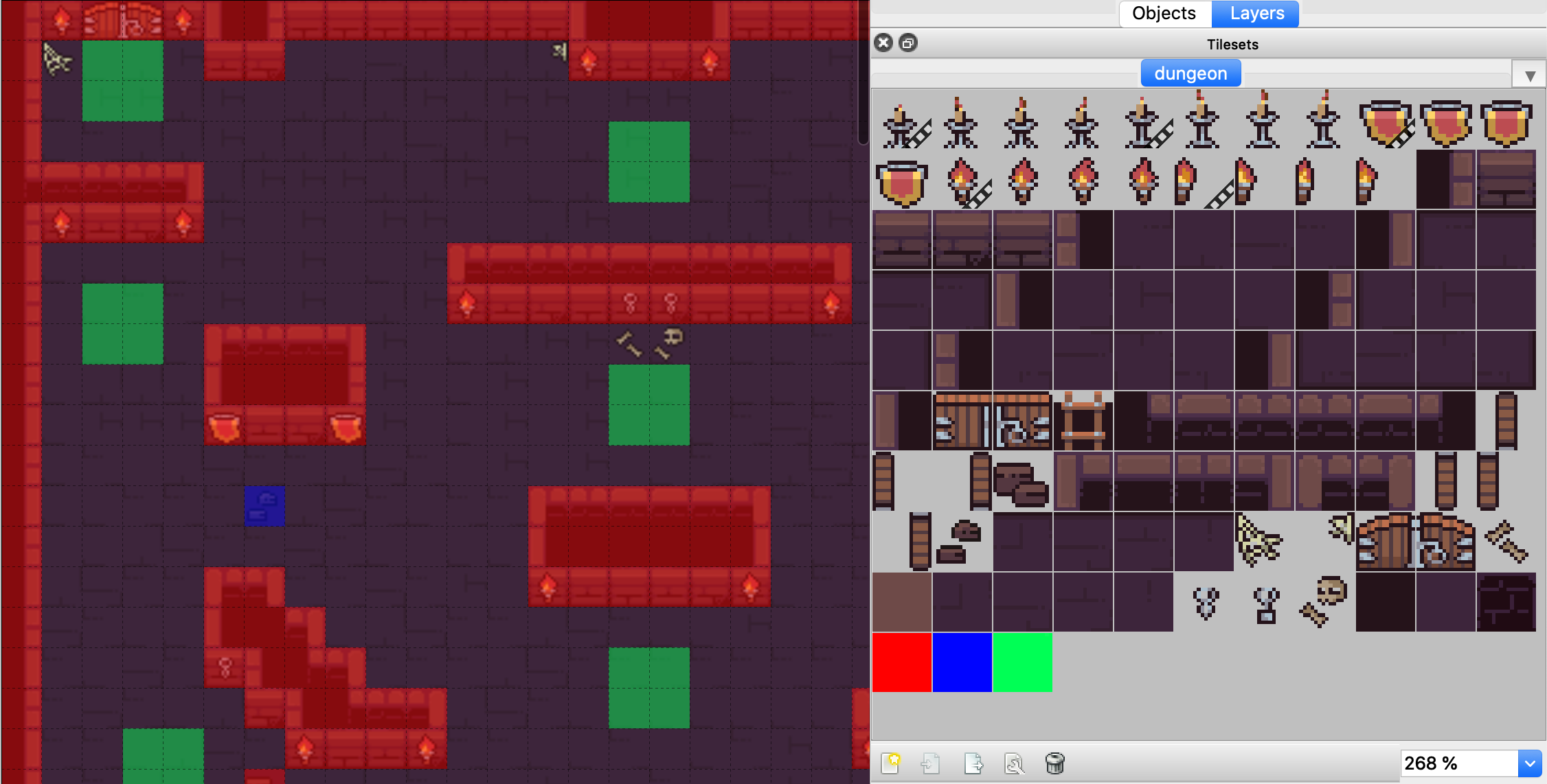 The tilesets is where lie the splitted spritesheet and its collision, animated and spawner tiles.

When defining which tile will be used for collisions it is very important to set its type field to either:

This can be done by selecting a tile in the tilesets editor, and entering its type on the left pane. 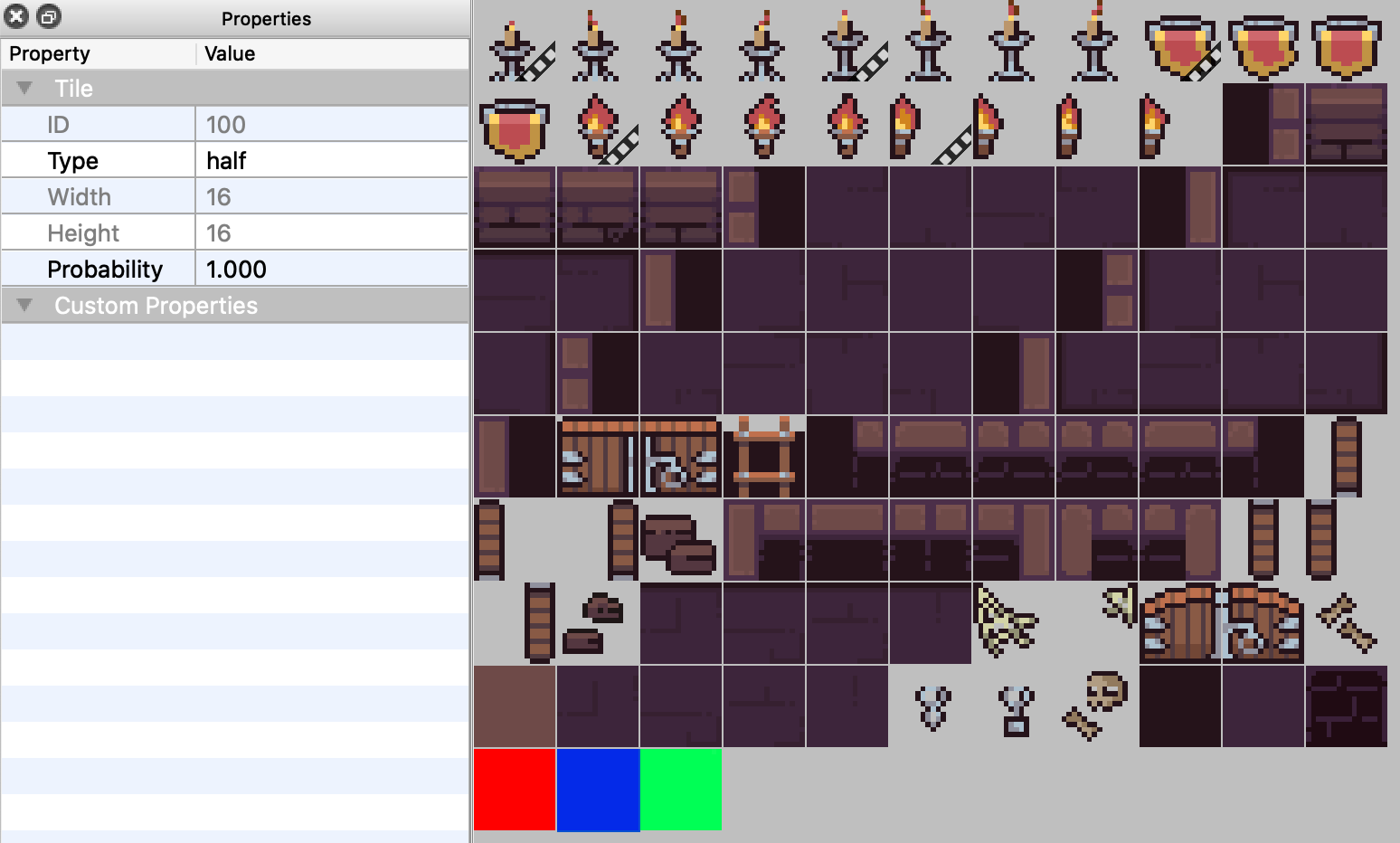 How to add my map to the game?

If you want to add your map to the game:

This is not an exhaustive, nor final, features list but it will give you a good indication on what I am working on:

Thanks to @endel for his fabulous work on Colyseus that made this game possible.

Thanks to the PIXI.js team for their incredible library and up-to-date documentation.

Thanks to @pixel_poem for the art package he published on Itch.io which made this game looks cool instantly.

Thanks to @thorbjorn81 for the many years of work on the Tiled map editor.

This project is under the MIT license.

The major libraries and assets used in this project and their licenses: