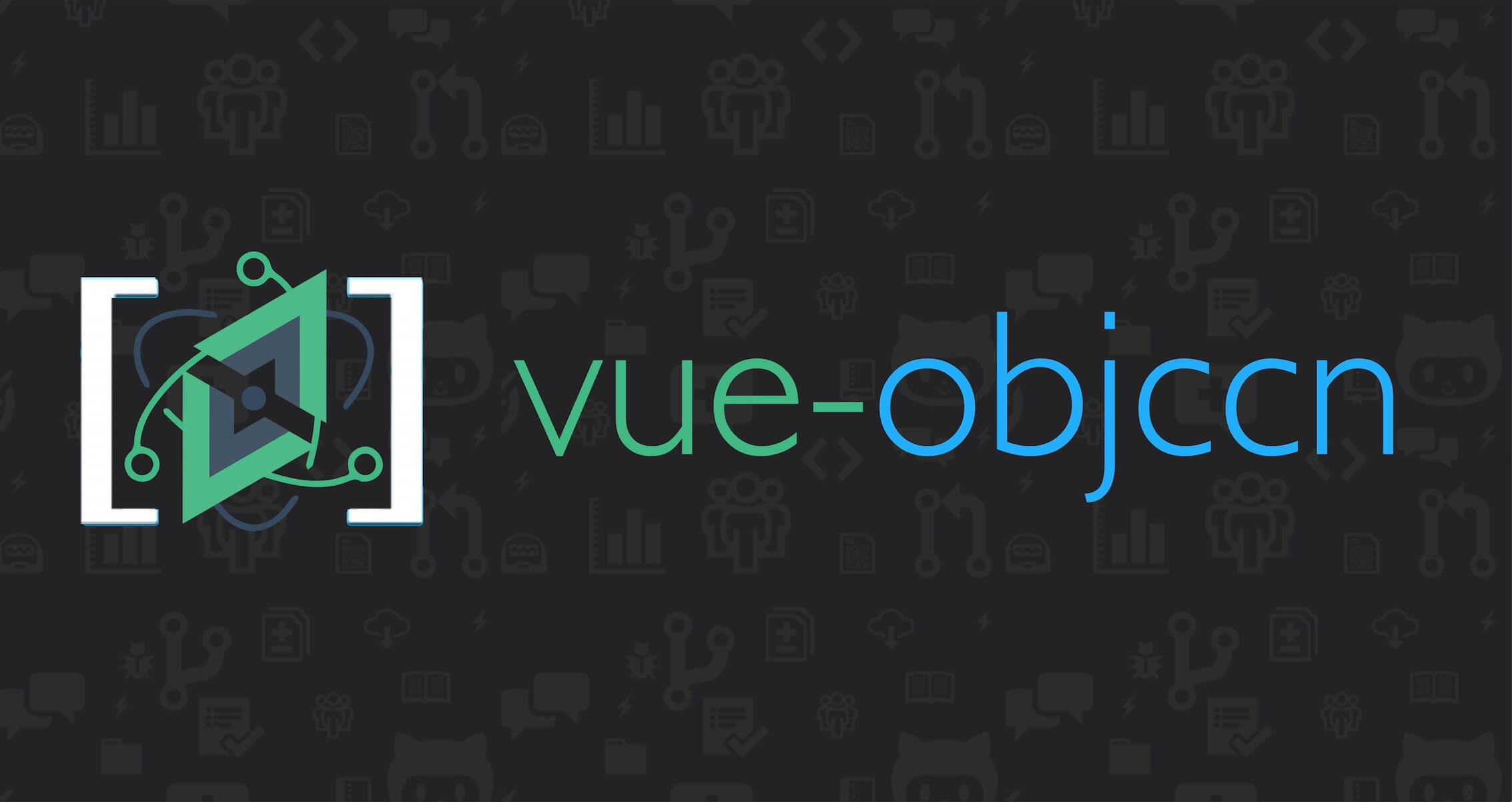 Use Vue.js to develop a cross-platform full stack application of Objc china.

Note: This project is just a bit of fun and purely for learning purpose, please support 喵神(@onevcat) and Objc china.

The download link for the runnable and complete packaged software is here.

I'm a full-time iOS developer, not a front-end developer. Due to take part in Weex development, I get to know the Vue.js.

2. Why write this project？

3. Why not use Weex to build this cross-platform project？

When I completed the project and tried to convert it directly into Weex, I got a lot of errors and most of them cannot be fixed immediately. I believe that I use the wrong way, not Weex's problem. By the way, Weex has released a new version, and then there is time to put Weex version of the open source again.

Well, into the topic, Let's introduce this project: 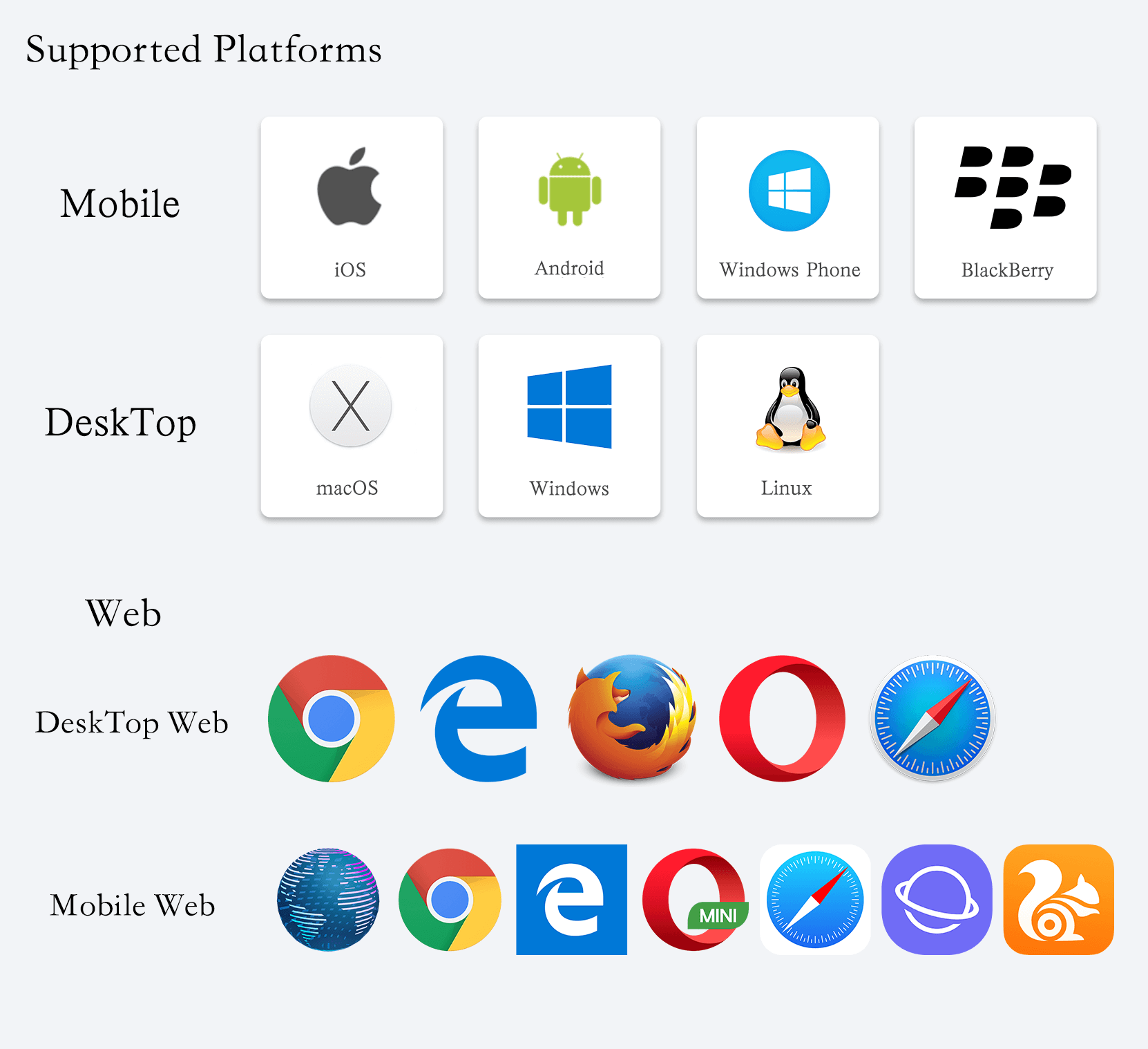 As the Objc china website is directly response html data, to simulate the network request to return data, I build a backend and write API to return data.

I use Express framework to build a server, set up in the 8081 port, and write routing, the request will go to 8080, open the server will automatically open the background.

Here to talk about Cordova's packaging alone, it is slightly more than the desktop side of the special point.

First, make the src/main.js file on the three lines on the Cordova note open, Cordova library initialization needs to be included in the generation of Vue instance outside. After opening the comment, proceed to the next step.

I put a Makefile in the project, you can do this according to this.

Cordova only generated a shell of the app, all the content are still read from the web page. There is a folder called WWW in the corresponding application and used to load the page. JavaScript package will generate the www folder, just replace the content under this folder.

In addition, if you develop a large app with Cordova framework and no any optimization, the user experience is really not as fast as the native. If you really want to use front-end technology to develop app, share you two recommendation: The one is trying to do optimization when use Cordova framework. The other is using React Native or Weex to get the experience close to native.

Package this project into desktop application by JavaScript cross-platform development, mainly used the Electron framework. Here you need to install these three dependencies "electron", "electron-builder" and "electron-packager" in devDependencies. Configure other paths in the webpack.

There may be encountered the following error:

The solution of this error is trying again the original order with the sudo command. This error could be solved

The final package will be done in the dist folder.

Next to show the performance of the cross-platform application on each platform:

First show the Web side: 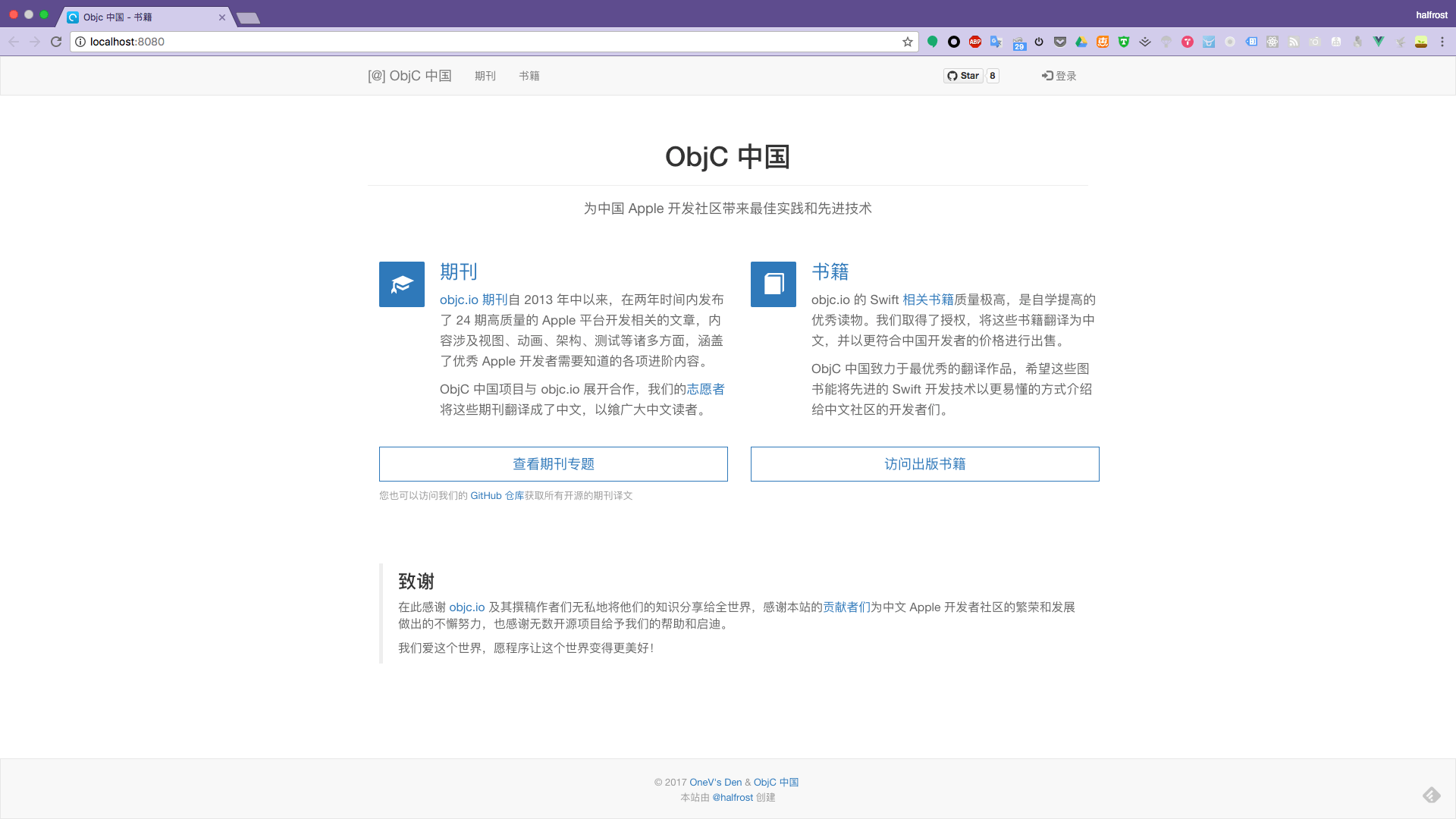 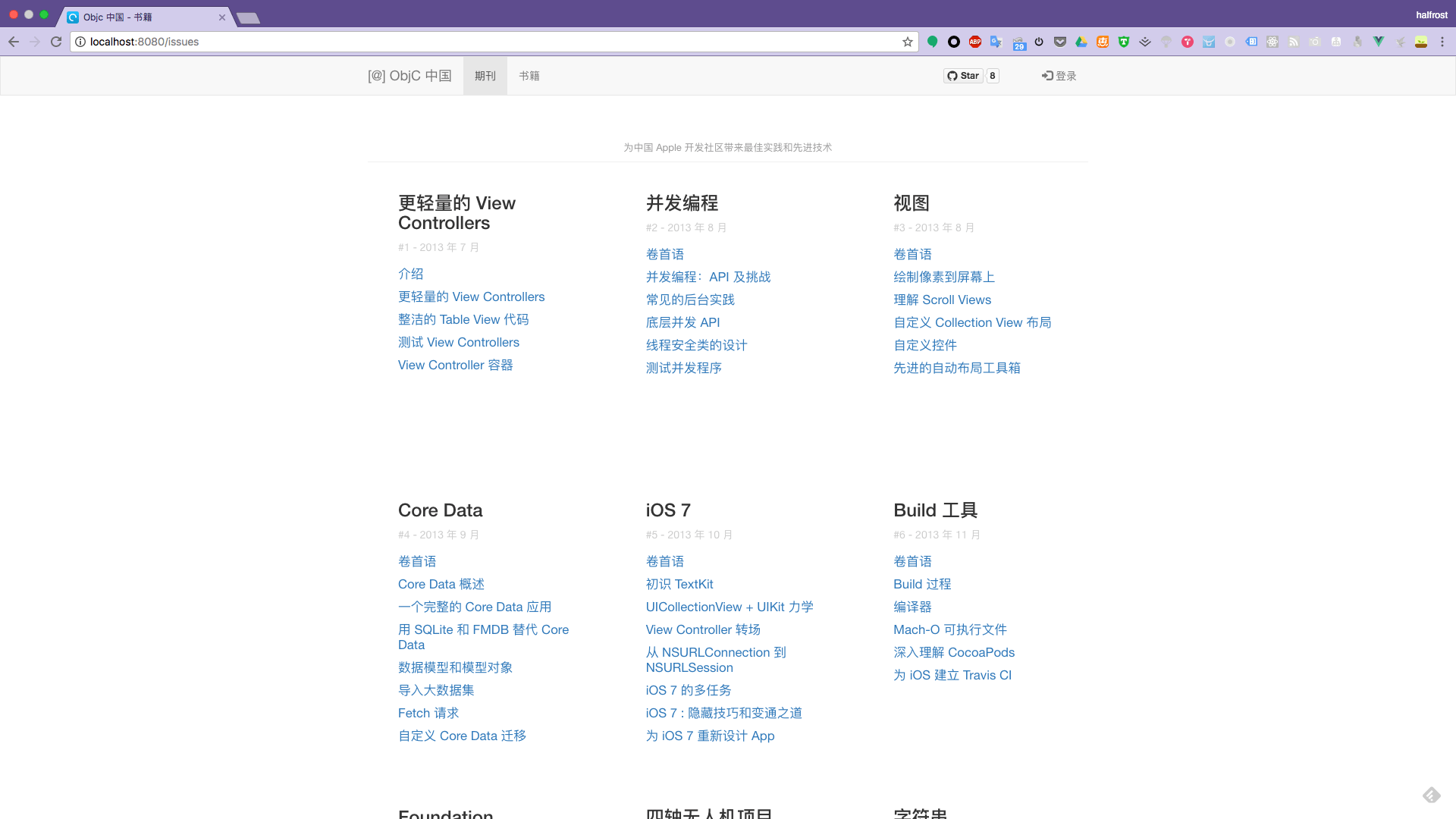 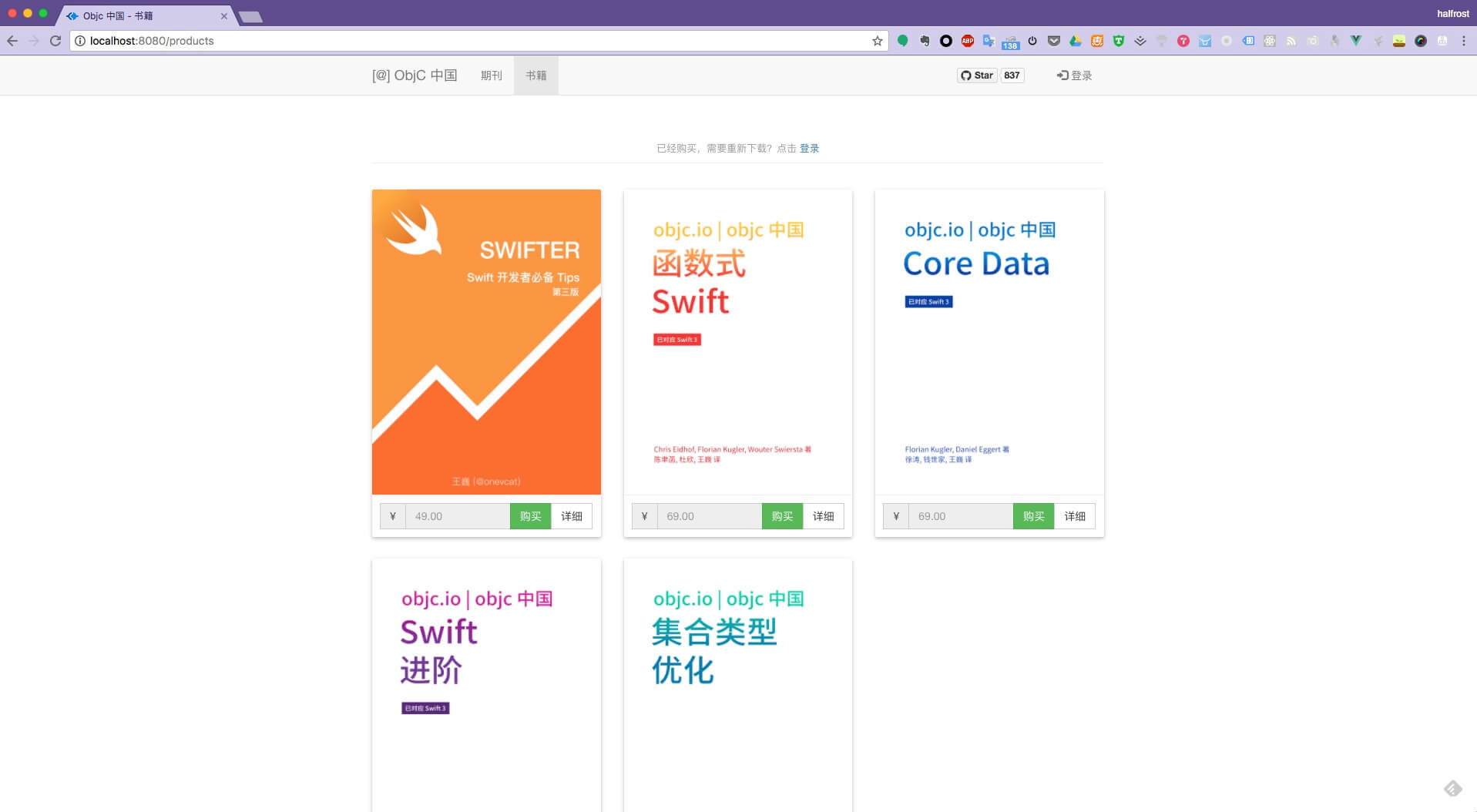 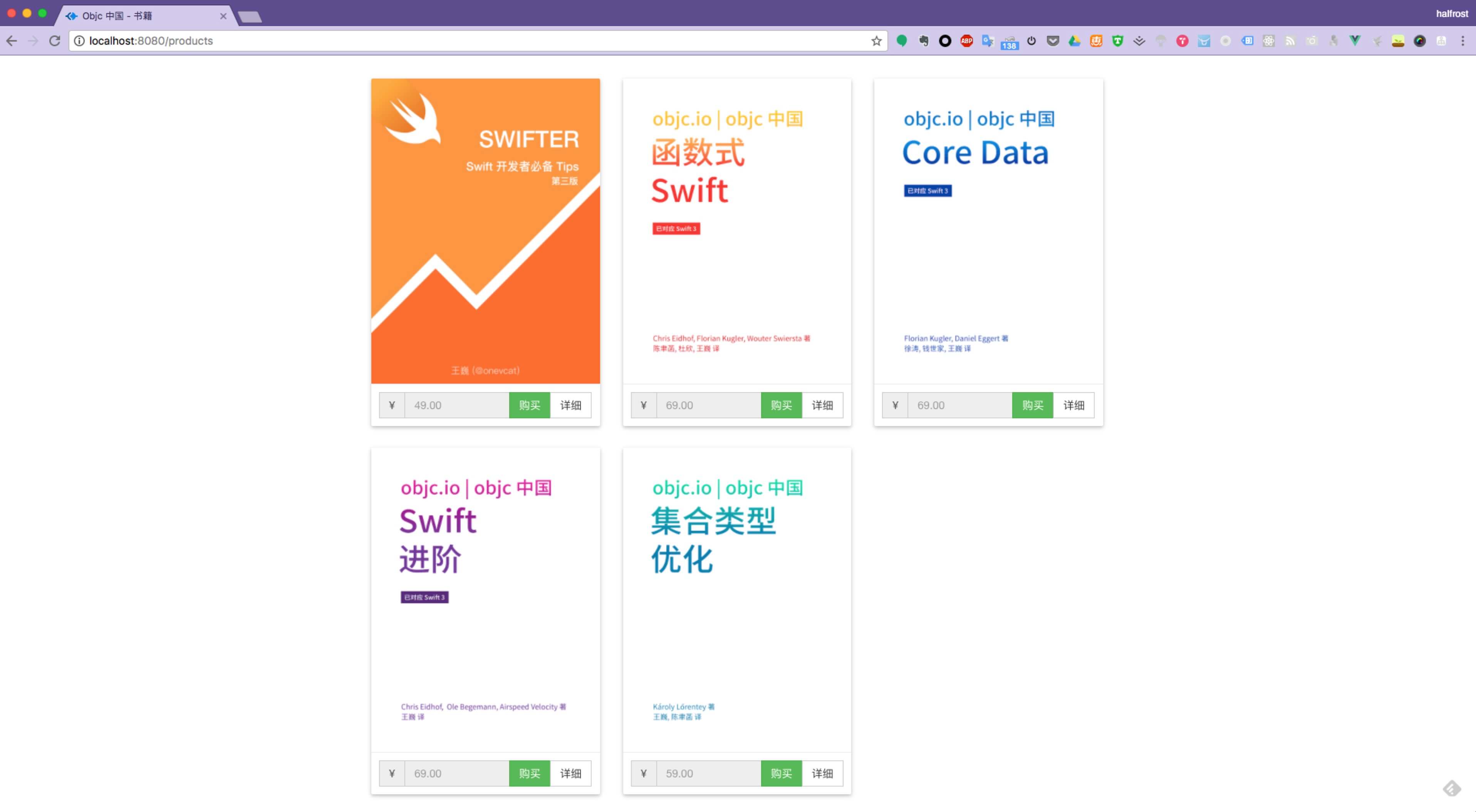 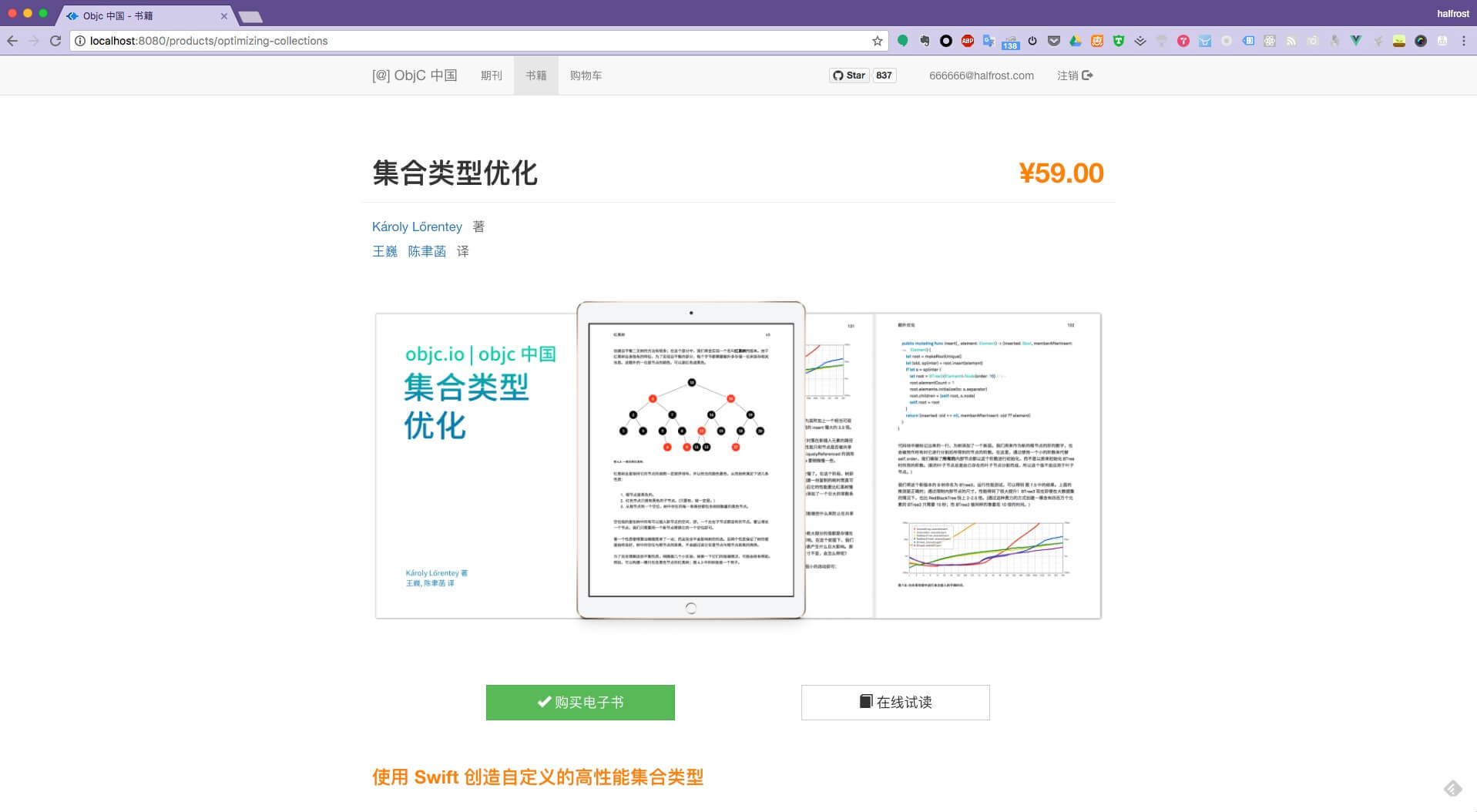 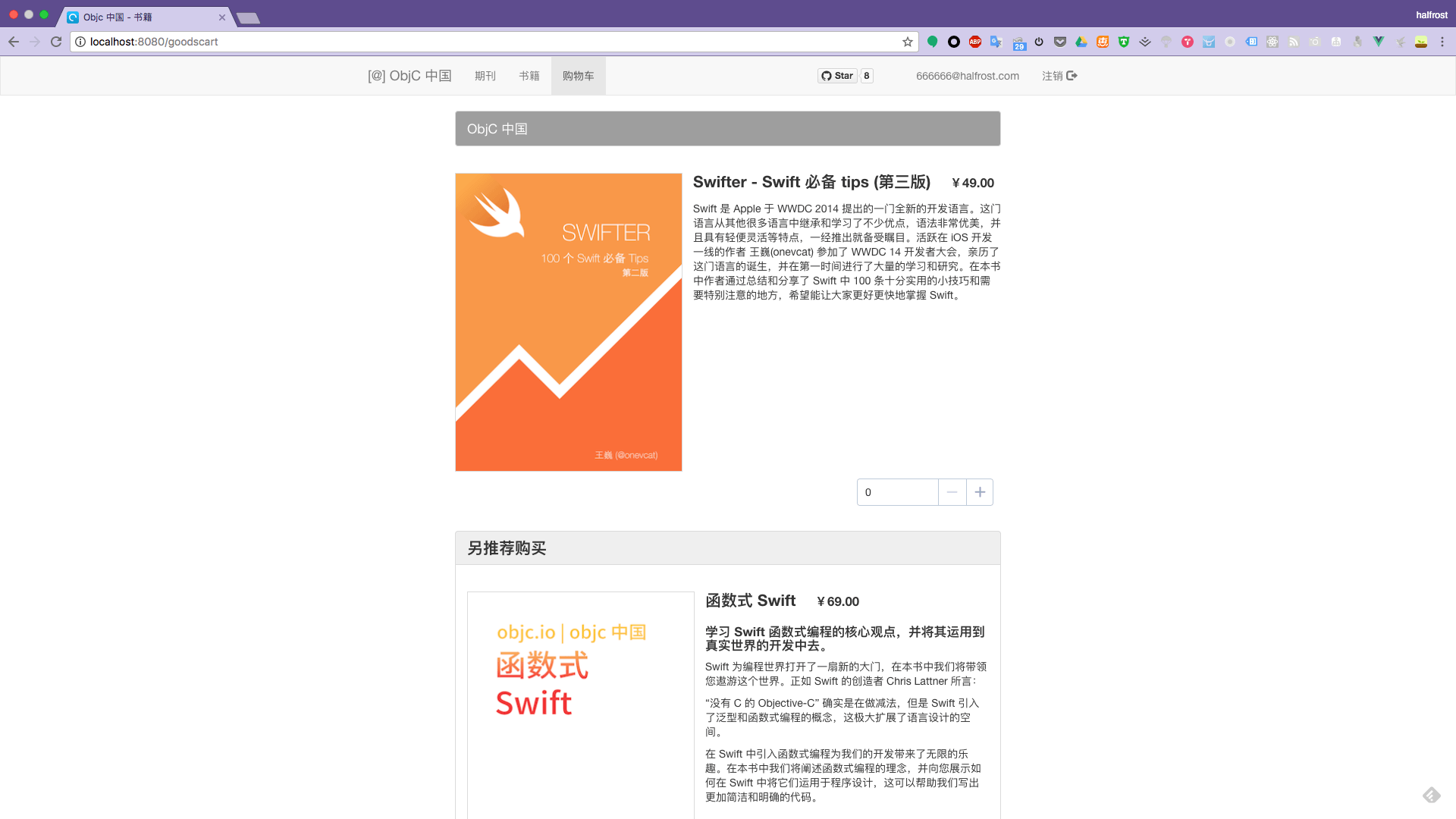 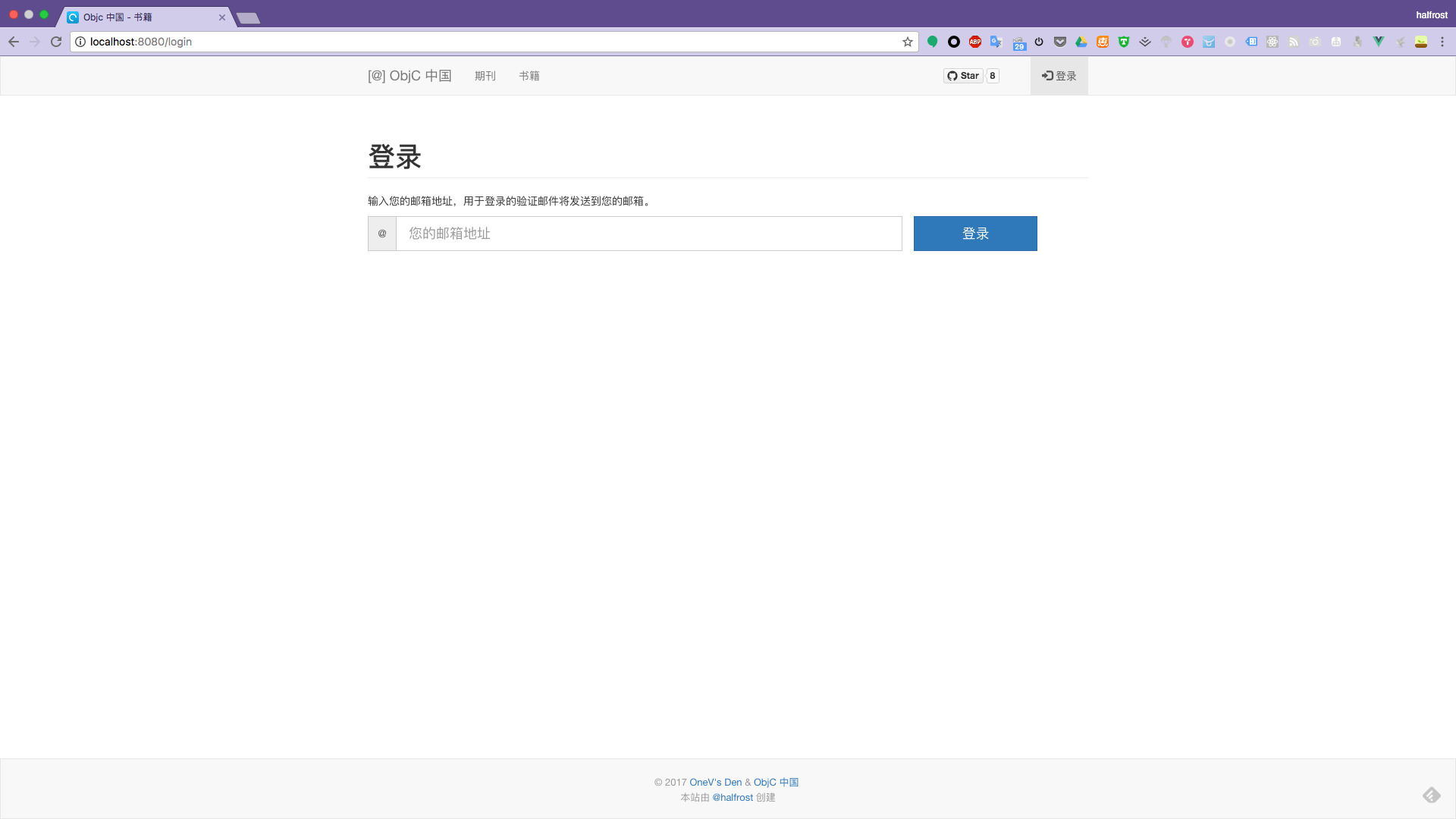 And then show the effect in the mobile browser: 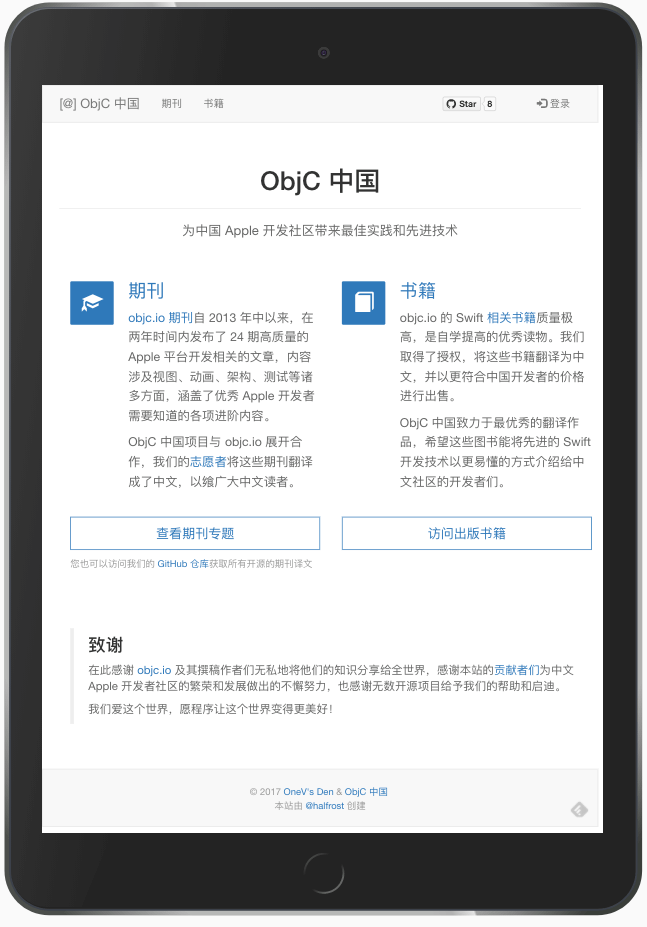 Then look at the performance in Mac side: 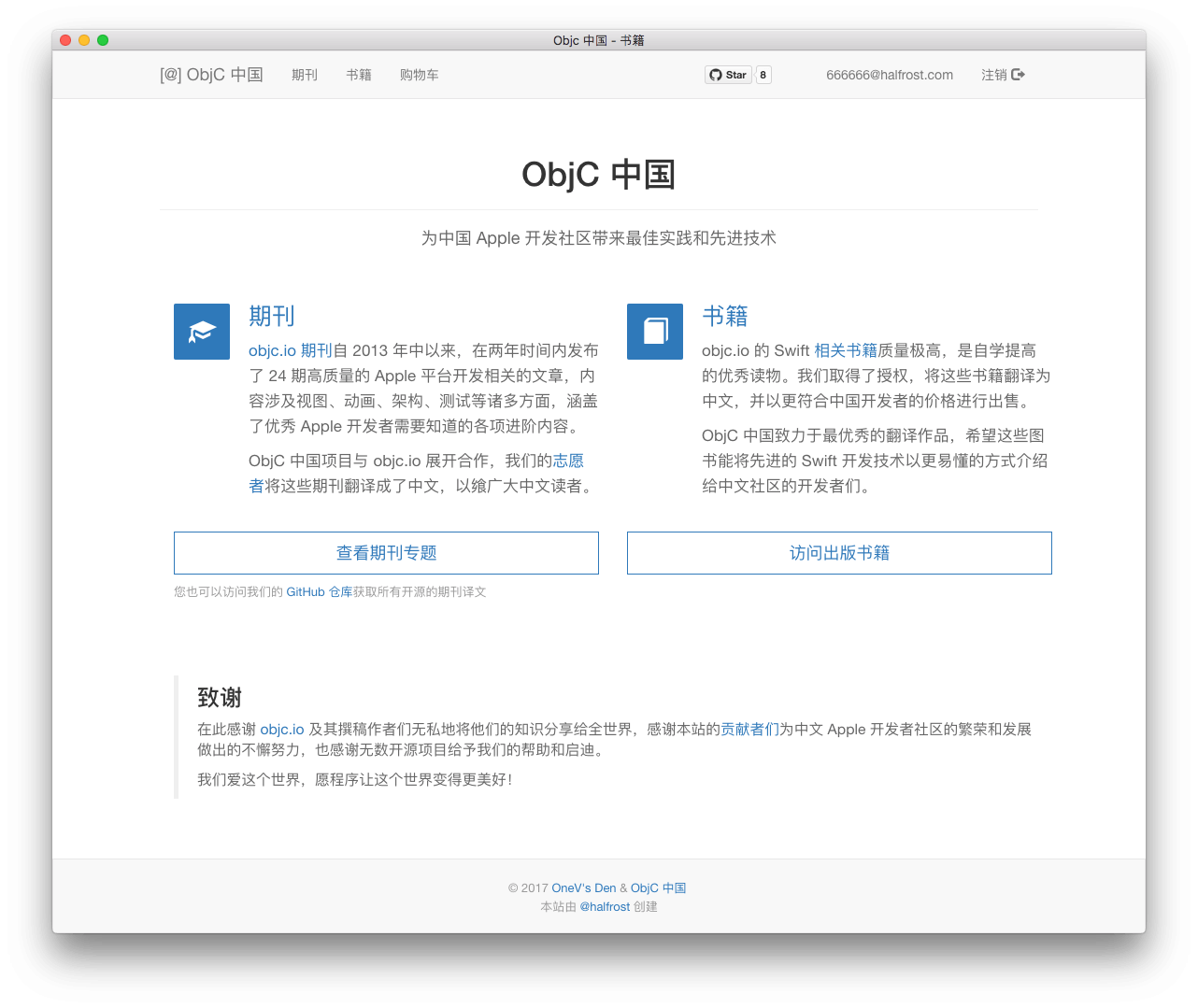 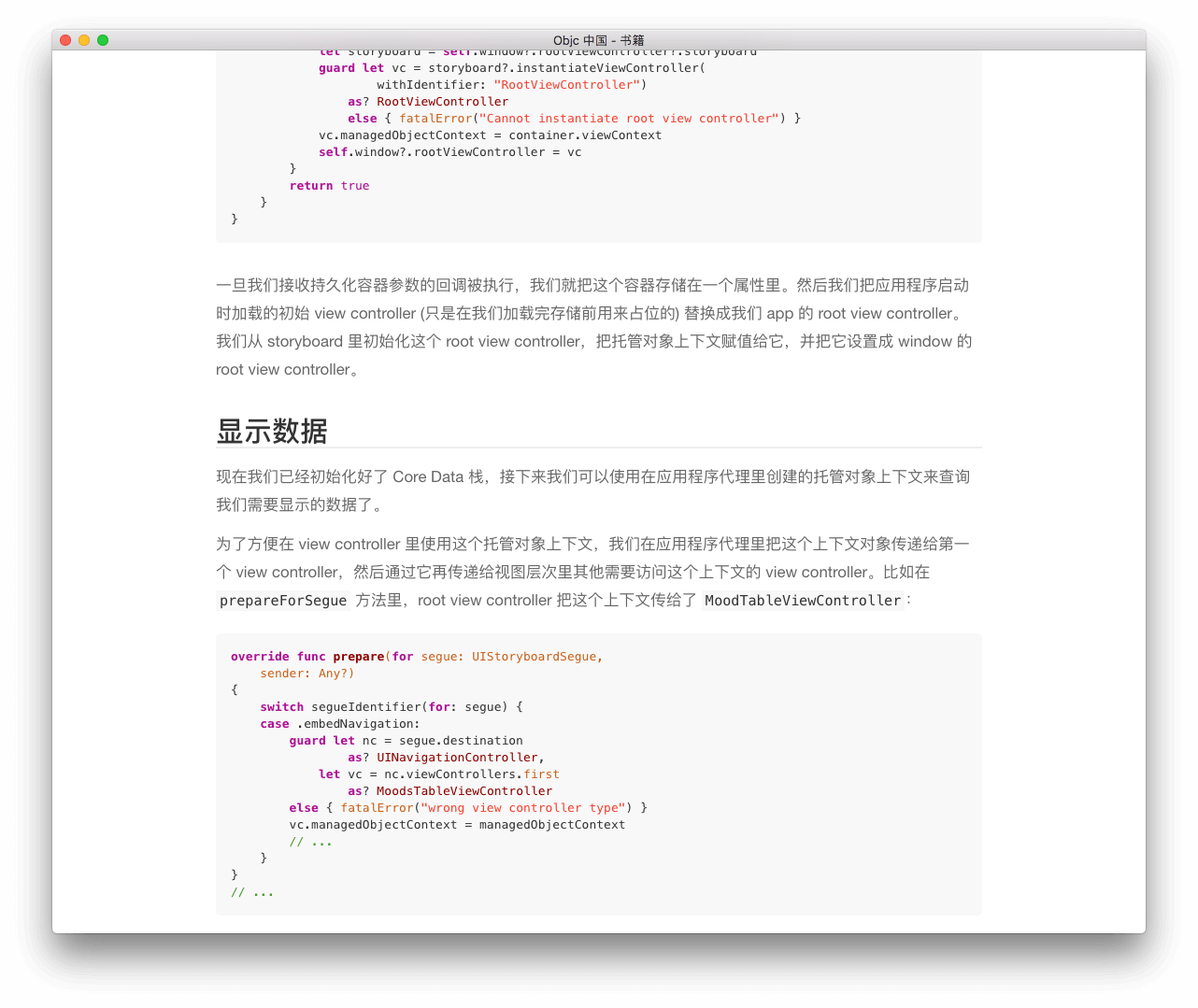 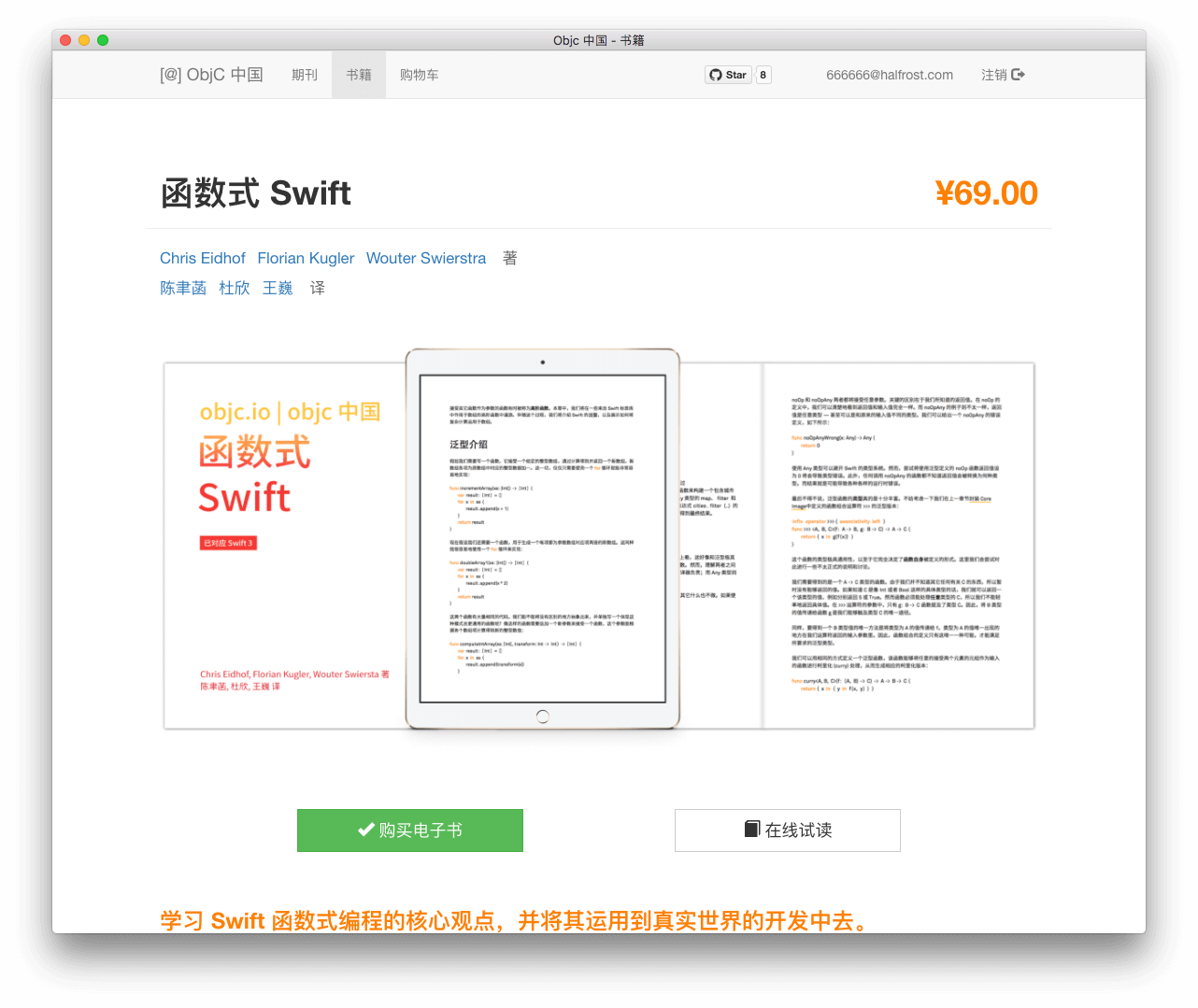 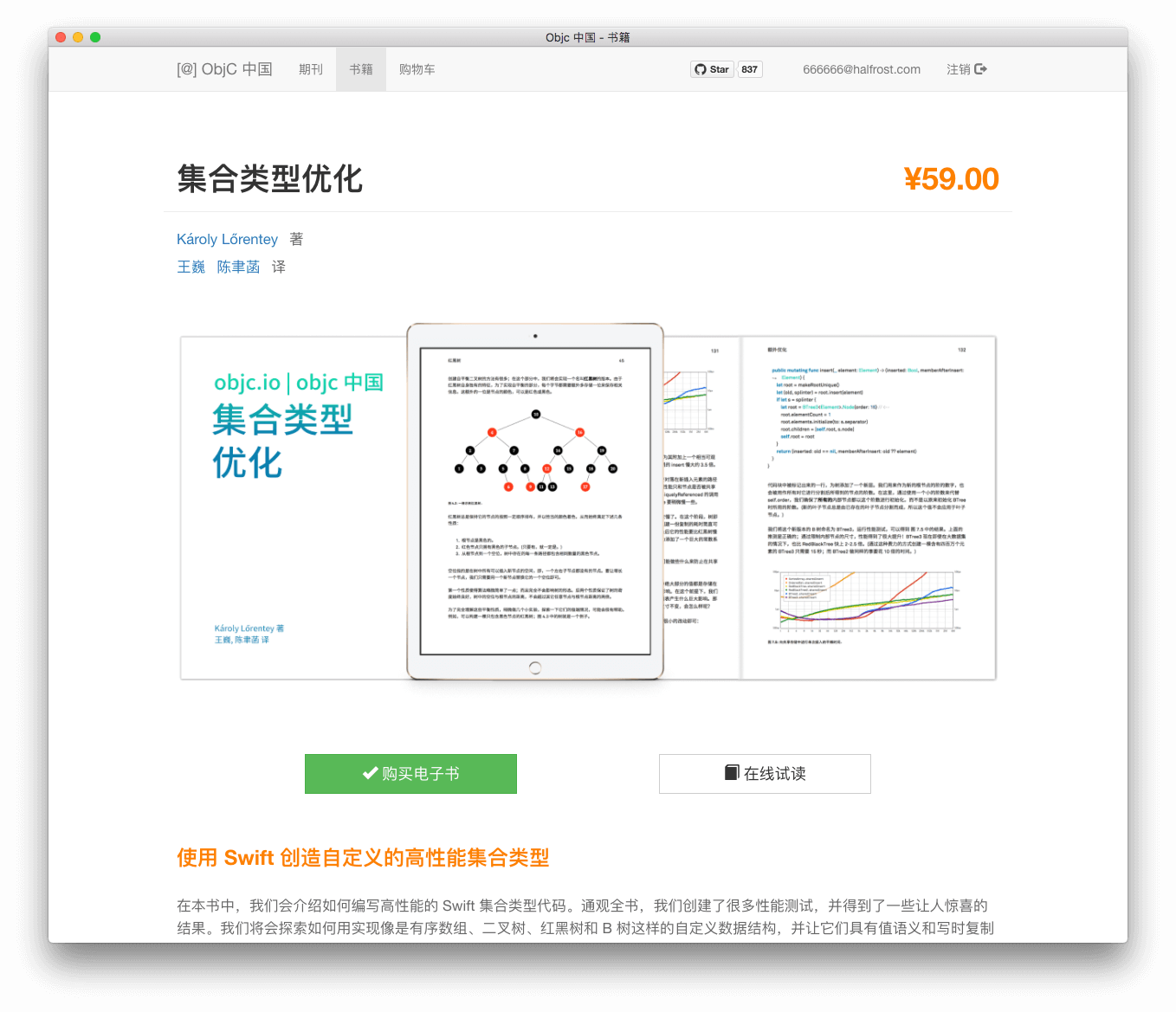 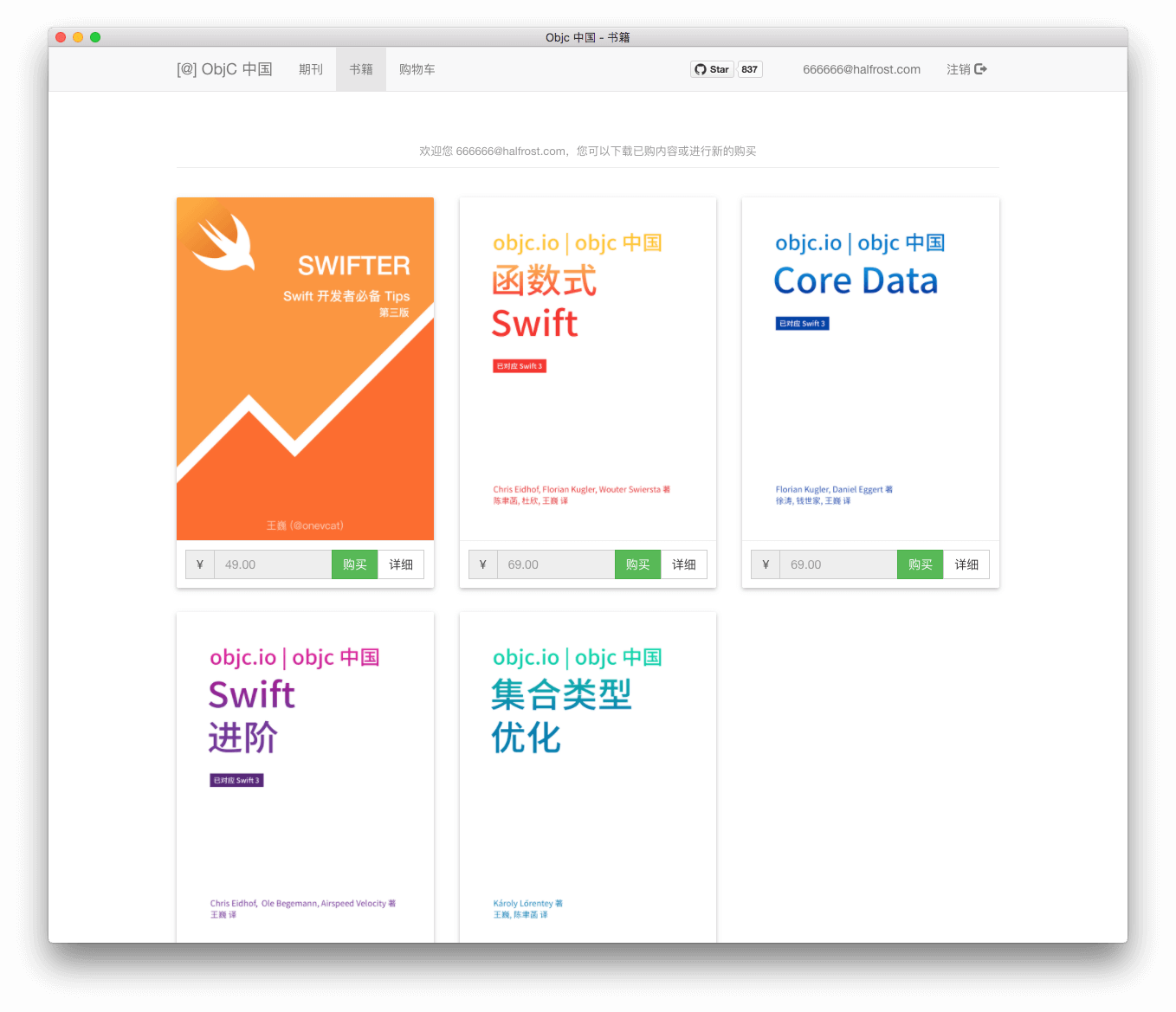 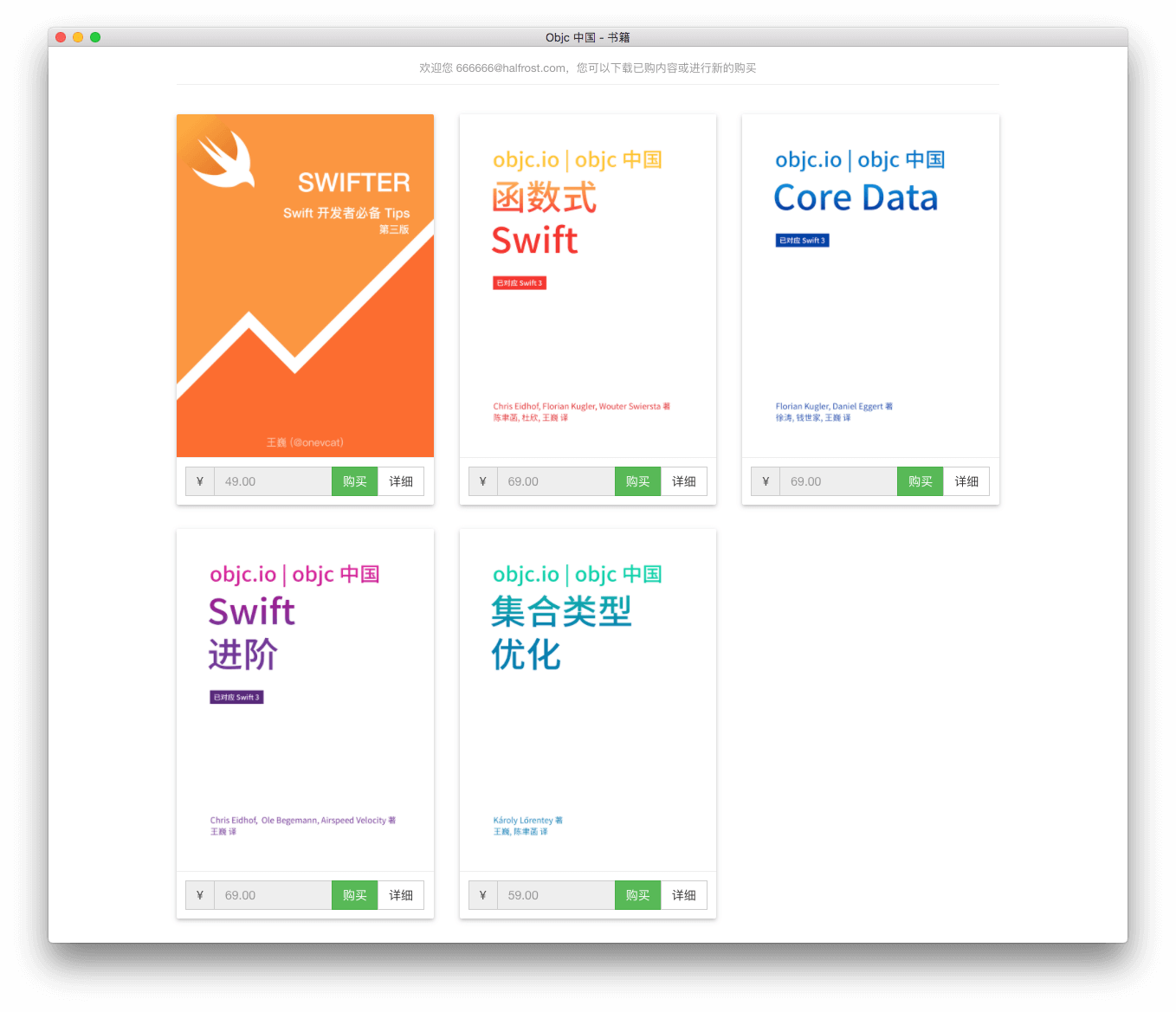 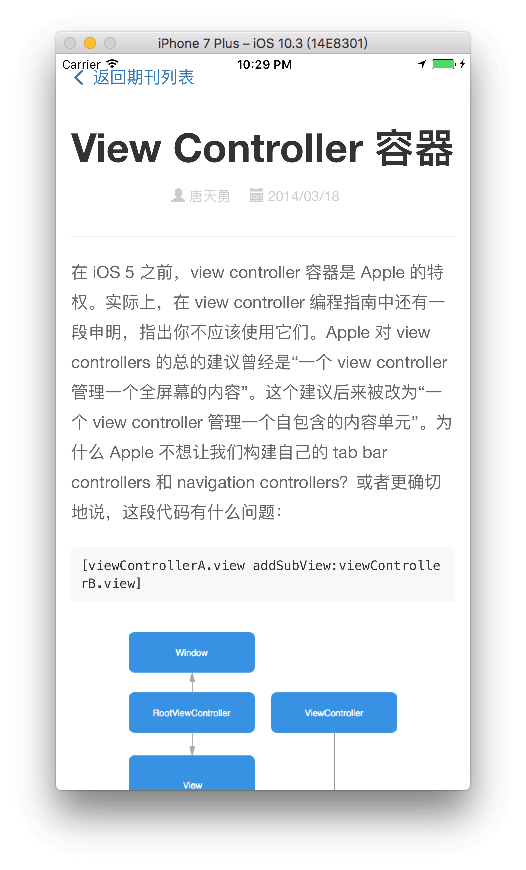 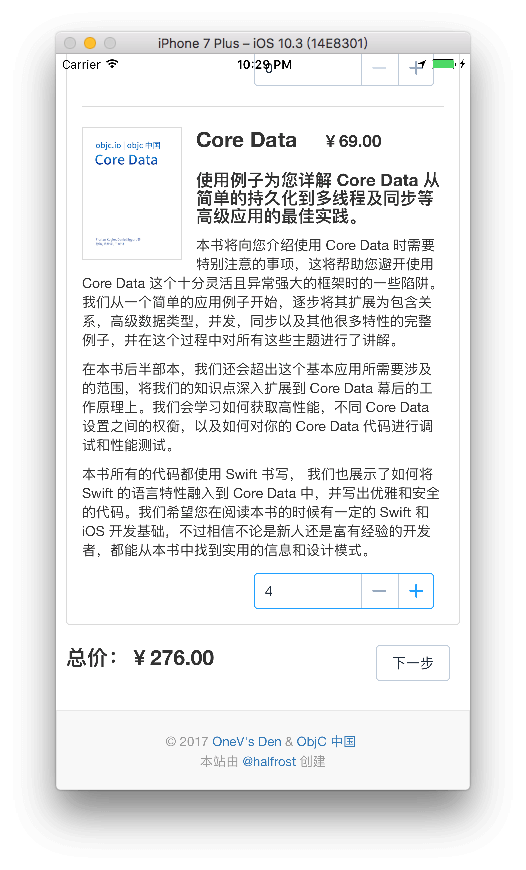 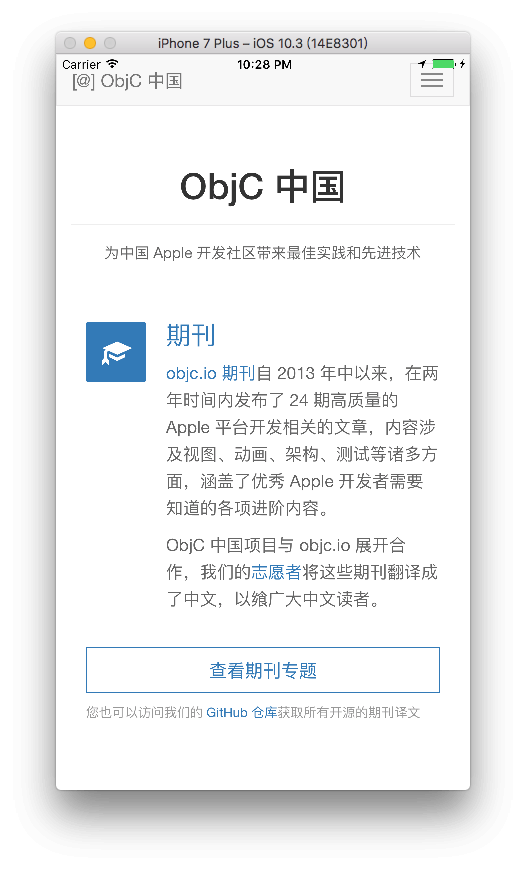 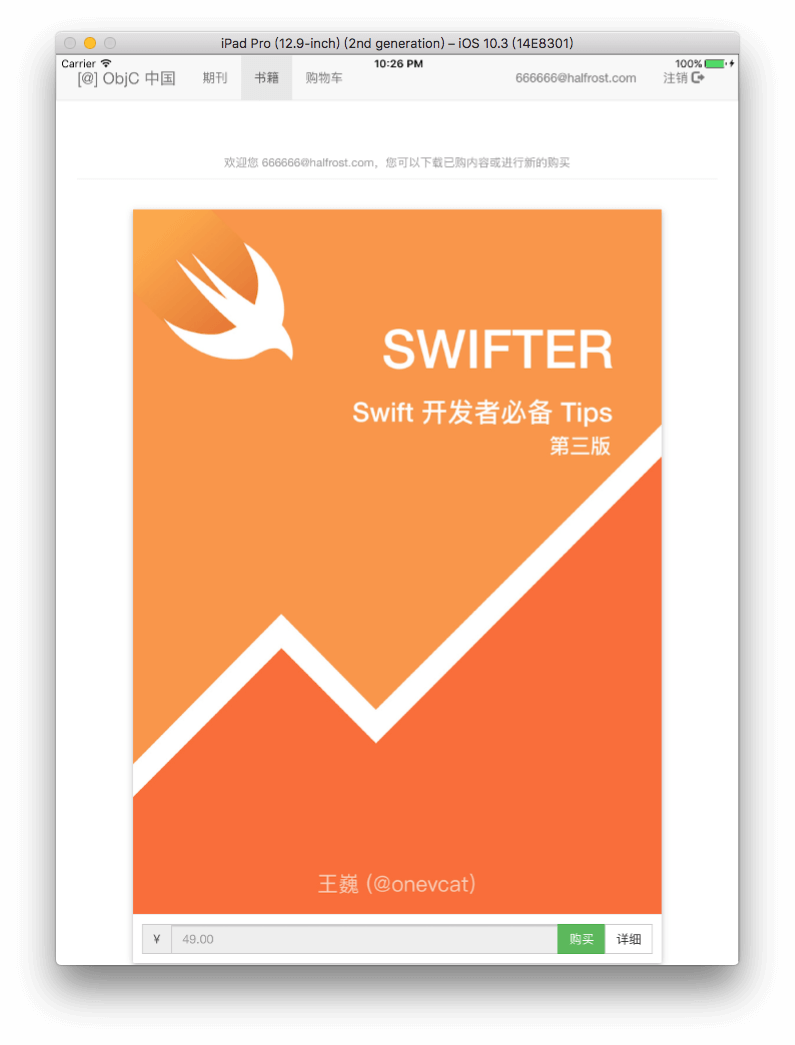 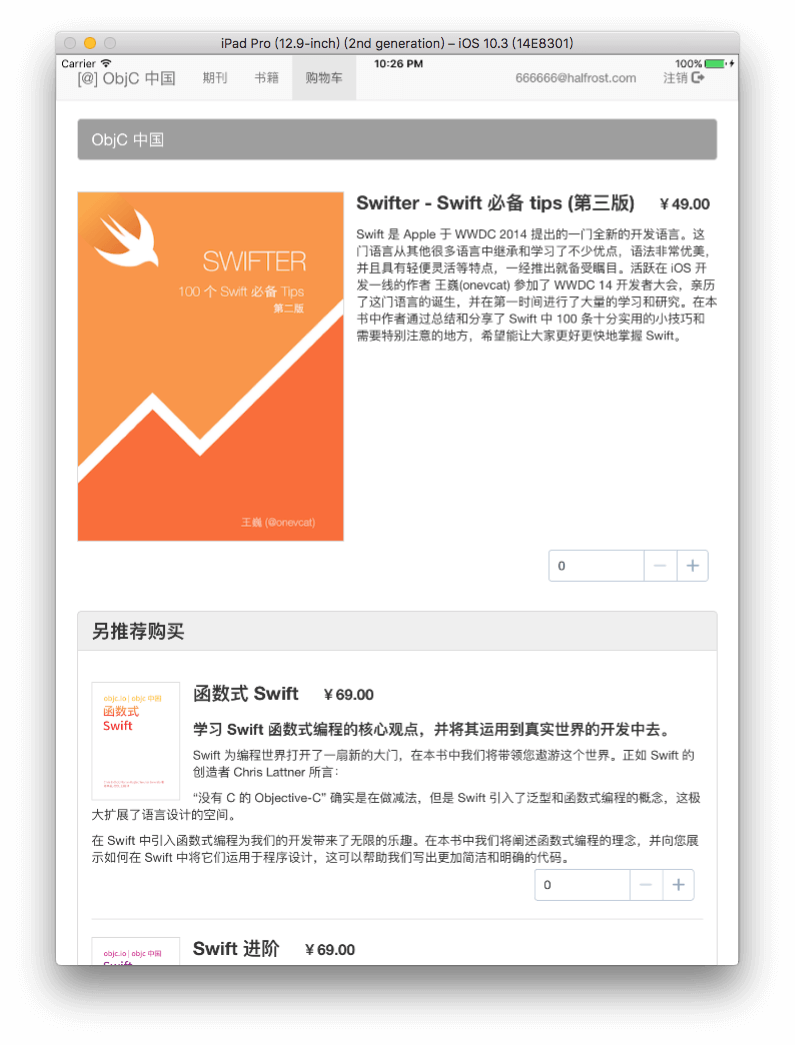 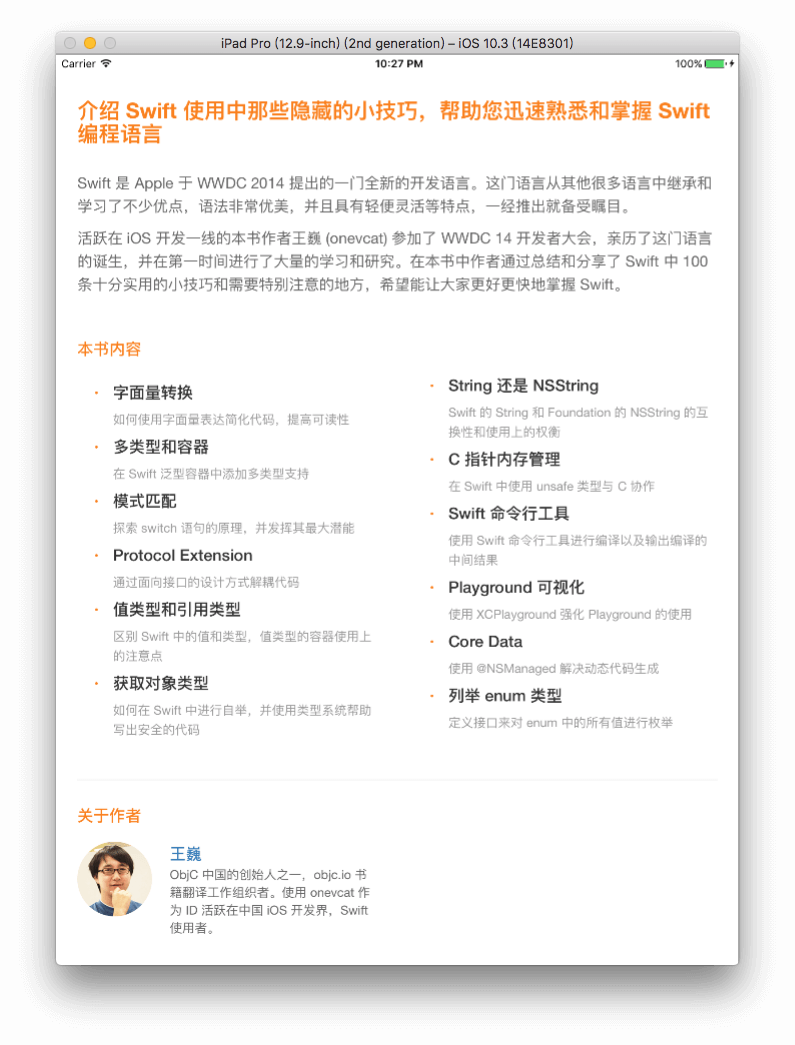 Vuex management status is very convenient. Login status saved in the state inside, the global object will be obtained it.

If there is no login in information and user click the purchase button to buy an e-book, it will jump to the login page.

Another point is to say that because this is a SPA, so the routing inside are using Router-link to achieve, but did not use <a> tag jump, the effect is to jump and do not have to request data, jump quickly. This user experience is really cool.

<router-link> is preferred over hard-coded <a href="..."> for the following reasons:

It works the same way in both HTML5 history mode and hash mode, so if you ever decide to switch mode, or when the router falls back to hash mode in IE9, nothing needs to be changed.

In HTML5 history mode, router-link will intercept the click event so that the browser doesn't try to reload the page.

When you are using the base option in HTML5 history mode, you don't need to include it in to prop's URLs.

Similarly, once the user logs out, all places showing the user name will become a status to be logged in, the shopping cart on navigationBar also be disappeared. Manage status with Vuex, very exciting.

This is the email form validation, not too much technical content.

Here is the shopping cart page and use the MVVM page binding ideas. There are four buttons on the page, clicking any one will immediately change the related total price. To iOSer, it's worthy to learn the implemention on the MVVM.

Then this is the iPhone's Safari performance, the speed is well.

In the cross-platform of these applications, the best experience, I think, is the application of Mac.

Finally is the mobile phone app build by Cordova framework, I'm a little picky and not satificated with the unoptimized Cordova. See this showcase below:

I strongly recommand you the element-ui (Vue.js developers must have heard of this library). It is a really fast way to build projects by using it, an app can be efficient developed. Save time and put more energy on business development.

Everyone says "Now is in the era of front-end, mobile development and front-end integration is inevitable". But there are many different aspectes of the development between front-end and iOS, I experience them all and think a lot. Font-end and iOS, they have lots to learn from each other in their own advantages and disadvantages, I intend to write an article series on those aspects - engineering, component, routing, MVVM. (Dig a big hole to jump)

If I had more free time, I would like to support Weex. Taking Vue.js into a complete Weex application, to become a native app, the performance will not be bad. After then, it can cover the entire platform.

Vue-ObjcCN is available under the GPLv3 license. See the LICENSE file for more info.