Guessing for fun and profit

TLDR; Erlang Distribution offers arbitrary code execution, and its access shall have been protected, as explicitely stated by Erlang. Sadly, well known daemons expose it, and authentication is based on a guessable seed.

The seductive properties of Erlang make it the core of network exposed daemons:

Both rabbitmq and ejbabberd provides messaging, a convenient way to interconnect components. OpenStack deployments routinely use rabbitmq as its core messaging system.

Erlang is a nice programming language. Joe Armstrong, its creator, has summarized it as:

Distribution is related to clustering and transparent remoting over TCP/IP. It is typically involved when Erlang processes on two or more nodes need to communicate and synchronize, e.g. two rabbitmq nodes working in high-availability mode.

Erlang is transparent and explicitely claims it is unsecure:

As a starter, let's use github.com to find trendy Erlang server projects. I bet it can change, but op eight of today's monthly gives:

Out of these eight projects, it turns out that seven of them setup a distribution port. So it is not something seldom, but rather a default setup for Erlang servers. Details can be found in setup and scan notes.

Erlang uses a registry to provide a naming function. The Erlang port mapper daemon aka epmd will list all the Erlang nodes accessible on the local host. Well known port for this daemon is TCP/4369. nmap will be able to extract information available on it:

Access to epmd may be filtered. Quoting ejabberd security guide:

Scanning the server will now produce:

Now let's see what can be done when accessing Erlang distribution protocol. In this part, we suppose we already have the cookie required to authenticate.

After pulling a few layers, we can see rabbitmq logs flowing. And we know the Erlang cookie because we explicitely set it using RABBITMQ_ERLANG_COOKIE environment variable.

rabbitmqctl is the name of the command line tool that controls rabbitmq server. It is built on top of Erlang distribution. It needs to remotely interact with rabbit Erlang process.

We already have all that we need in the previously pulled image:

The command id && hostname has actually run on server, which hostname is hare.

As we show above, knowing the Erlang cookie and having access to Erlang distribution is enough to get remote command execution, under the user running the Erlang process.

The curious has noticed that we set the Erlang cookie by ourself. Recalling that communicating nodes shall share the same cookie, you basically have two solutions:

The rest will focus on automatically generated Erlang cookies.

The recipe can be found at the heart of auth.erl:

The rest will focus on recent Erlang versions using the newest recipe.

The cookie is derived from a seed. The seed is computed from quantities obtained via:

It appears that both quantities are fairly predictable. The diagram below depicts the distribution of seeds for a targeted hardware platform: 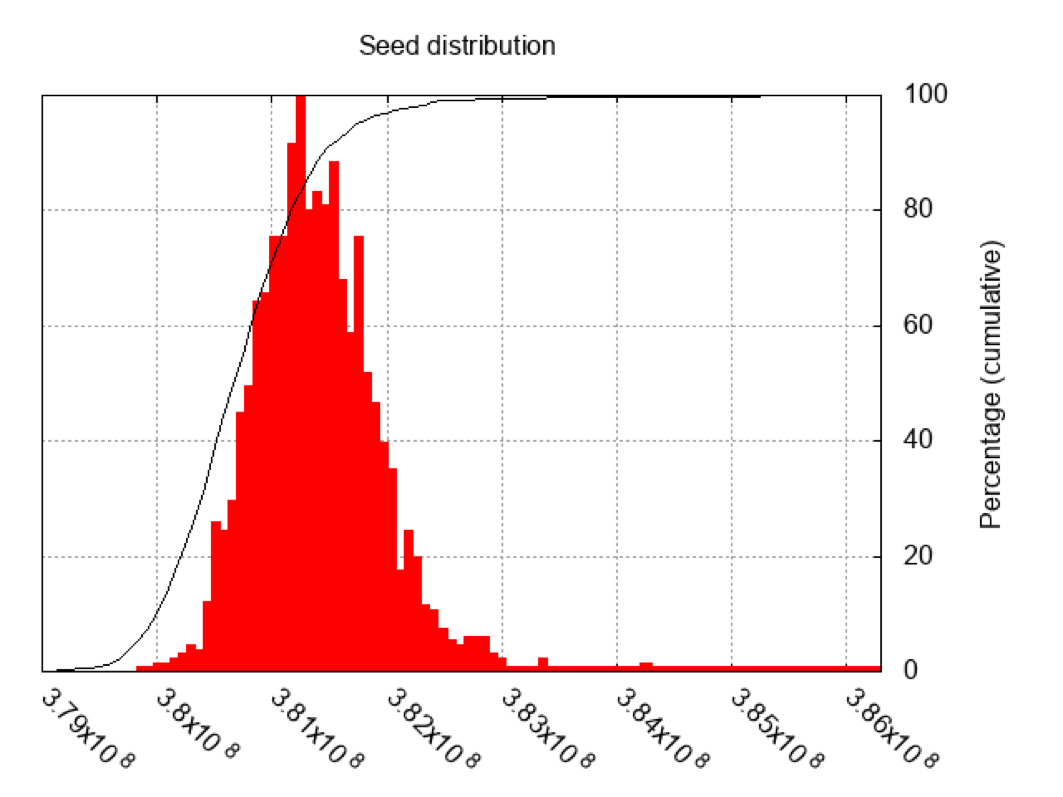 Tooling around the vulnerability

An easy way is to generate a lot of cookies via starting a fresh rabbitmq daemon and harvesting the Erlang cookie. A seed used to generate the cookie can be obtained via revert-prng:

Reverting of the PRNG is based on finding a minimal solution to a 21*21 system in Z/_2^36_Z. sage provides the solve_right primitive which handles all the work to provide a suitable solution.

rabbitmq logs the raw md5 of the cookie in its log, base64 encoded. Oops. And oops again.

You can use crack-hash to sweep through all the seeds and find matching md5:

Shall you have access to pablo-HP machine, you could execute code on his machine.

Note that only automatically generated cookies can be found by this tool. If the admin was wise enough to replace the Erlang cookie, the tool will fail with:

In this case you can always fall back to raw md5 cracking using oclHashcat or john. Or google. The hash above matches password as plaintext.

Imagine that a crash has given you only a part of the cookie. Due to its nature, missing parts can be completed ! For starter, let's begin with just a missing character, at the beginning:

Mission accomplished, though bruteforcing the 26 possible first character would have been much easier. But let's take a more complex example, only the last seven characters were dumped:

When you have found an open suitable port, you can use bruteforce-erldp to sweep a seed interval and perform network exchanges to authenticate.

In the context of the above hardware setup, using the computed interval uncovers the Erlang cookie in 30 seconds:

Bruteforce is not always entitled with success. In particular, Erlang cookies which have not been generated by Erlang will not be guessable. However, Erlang runtime does not put throttling protection, nor lock out mecanism based on attempting source IP, so ... it is worth trying it.

Coming back to our target setup:

Doing the same for ejabberd works the very same, as we use a function built in Erlang, not in upper daemon developped in Erlang:

Gaining an interactive reverse shell is now a step ahead.

A man-in-the-middle attacker may wait for the legit client to authenticate, and then inject malicious commands into the external encoded Erlang stream, which is neither ciphered, neither authenticated. This part is now implemented, as a Python asyncore Erlang distribution proxy. It currently identifies and outputs challenges/responses, leaving the cookie to be cracked offline. It can also be used to inject an RCE Erlang payload inside an authenticated channel.

It requires the client to connect to the attacker proxy. The proxy must then know how to connect to legitimate server. The associated command line option is:

It requires the use of a redirect rule, such as:

In this case, the initial destination is retrieved from the socket through the use of SO\_ORIG\_DSTADDR. The legit connection to the victim server is then performed. This is the default mode when --target is not used:

The goal is to collect authentication exchanges, and crack cookie offline.

The reader can verify that in this case, cookie is ejabberd.

The goal is to inject a correctly formatted OS command inside the authenticated channel right after authentication is successful.