This repo contains PyTorch implementation of the original transformer paper (🔗 Vaswani et al.).
It's aimed at making it easy to start playing and learning about transformers.

Transformers were originally proposed by Vaswani et al. in a seminal paper called Attention Is All You Need.

You probably heard of transformers one way or another. GPT-3 and BERT to name a few well known ones 🦄. The main idea is that they showed that you don't have to use recurrent or convolutional layers and that simple architecture coupled with attention is super powerful. It gave the benefit of much better long-range dependency modeling and the architecture itself is highly parallelizable (💻💻💻) which leads to better compute efficiency!

Here is how their beautifully simple architecture looks like: 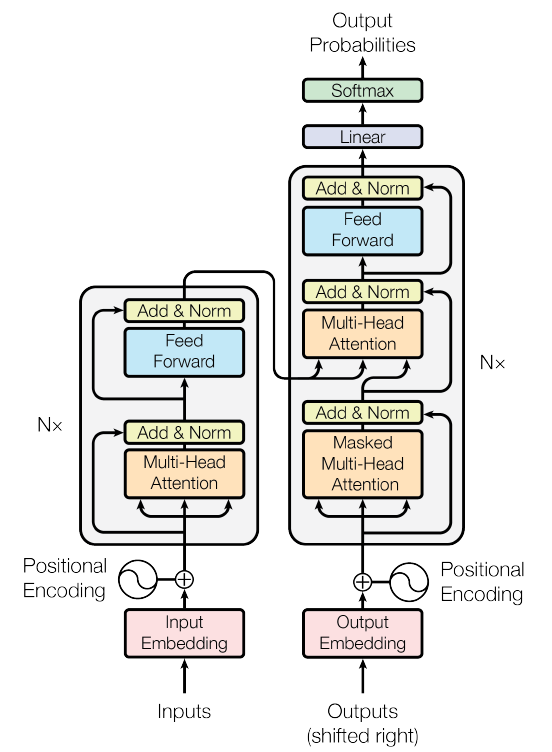 This repo is supposed to be a learning resource for understanding transformers as the original transformer by itself is not a SOTA anymore.

For that purpose the code is (hopefully) well commented and I've included the playground.py where I've visualized a couple of concepts which are hard to explain using words but super simple once visualized. So here we go!

Can you parse this one in a glimpse of the eye?

Neither can I. Running the visualize_positional_encodings() function from playground.py we get this: 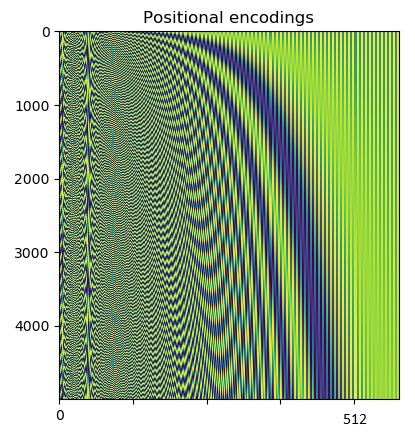 Depending on the position of your source/target token you "pick one row of this image" and you add it to it's embedding vector, that's it. They could also be learned, but it's just more fancy to do it like this, obviously! 🤓

Similarly can you parse this one in O(1)?

Noup? So I thought, here it is visualized: 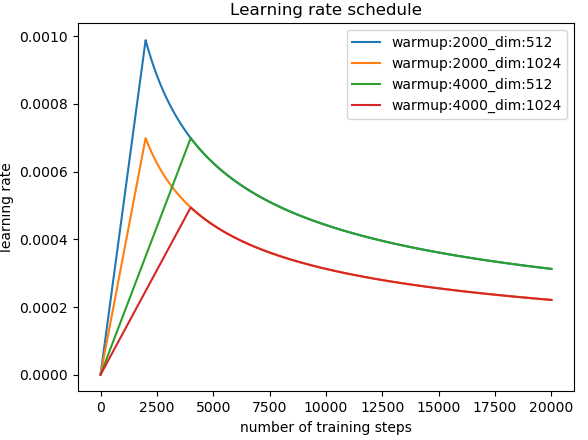 It's super easy to understand now. Now whether this part was crucial for the success of transformer? I doubt it. But it's cool and makes things more complicated. 🤓 (.set_sarcasm(True))

Note: model dimension is basically the size of the embedding vector, baseline transformer used 512, the big one 1024

First time you hear of label smoothing it sounds tough but it's not. You usually set your target vocabulary distribution to a one-hot. Meaning 1 position out of 30k (or whatever your vocab size is) is set to 1. probability and everything else to 0.

In label smoothing instead of placing 1. on that particular position you place say 0.9 and you evenly distribute the rest of the "probability mass" over the other positions (that's visualized as a different shade of purple on the image above in a fictional vocab of size 4 - hence 4 columns)

Note: Pad token's distribution is set to all zeros as we don't want our model to predict those!

Aside from this repo (well duh) I would highly recommend you go ahead and read this amazing blog by Jay Alammar!

Transformer was originally trained for the NMT (neural machine translation) task on the WMT-14 dataset for:

What I did (for now) is I trained my models on the IWSLT dataset, which is much smaller, for the English-German language pair, as I speak those languages so it's easier to debug and play around.

I'll also train my models on WMT-14 soon, take a look at the todos section.

Anyways! Let's see what this repo can practically do for you! Well it can translate!

Some short translations from my German to English IWSLT model:

Which is actually also not completely bad! Because:

Similarly for the English to German model.

So we talked about what transformers are, and what they can do for you (among other things).
Let's get this thing running! Follow the next steps:

That's it! It should work out-of-the-box executing environment.yml file which deals with dependencies.
It may take a while as I'm automatically downloading SpaCy's statistical models for English and German.

PyTorch pip package will come bundled with some version of CUDA/cuDNN with it, but it is highly recommended that you install a system-wide CUDA beforehand, mostly because of the GPU drivers. I also recommend using Miniconda installer as a way to get conda on your system. Follow through points 1 and 2 of this setup and use the most up-to-date versions of Miniconda and CUDA/cuDNN for your system.

Just run jupyter notebook from you Anaconda console and it will open the session in your default browser.
Open The Annotated Transformer ++.ipynb and you're ready to play!

Option 2: Use your IDE of choice

You just need to link the Python environment you created in the setup section.

To run the training start the training_script.py, there is a couple of settings you will want to specify:

So an example run (from the console) would look like this:
python training_script.py --batch_size 1500 --dataset_name IWSLT --language_direction G2E

The code is well commented so you can (hopefully) understand how the training itself works.

Note: data loading is slow in torch text, and so I've implemented a custom wrapper which adds the caching mechanisms and makes things ~30x faster! (it'll be slow the first time you run stuff)

The second part is all about playing with the models and seeing how they translate!
To get some translations start the translation_script.py, there is a couple of settings you'll want to set:

(*) Note: after you train your model it'll get dumped into models/binaries see what it's name is and specify it via the --model_name parameter if you want to play with it for translation purpose. If you specify some of the pretrained models they'll automatically get downloaded the first time you run the translation script.

That's it you can also visualize the attention check out this section. for more info.

I tracked 3 curves while training:

BLEU is an n-gram based metric for quantitatively evaluating the quality of machine translation models.
I used the BLEU-4 metric provided by the awesome nltk Python module.

I got these using greedy decoding so it's a pessimistic estimate, I'll add beam decoding soon.

Important note: Initialization matters a lot for the transformer! I initially thought that other implementations using Xavier initialization is again one of those arbitrary heuristics and that PyTorch default init will do - I was wrong: 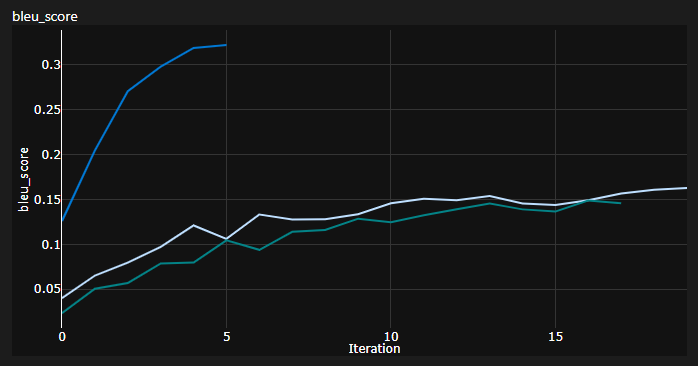 You can see here 3 runs, the 2 lower ones used PyTorch default initialization (one used mean for KL divergence loss and the better one used batchmean), whereas the upper one used Xavier uniform initialization!

Idea: you could potentially also periodically dump translations for a reference batch of source sentences.
That would give you some qualitative insight into how the transformer is doing, although I didn't do that.
A similar thing is done when you have hard time quantitatively evaluating your model like in GANs and NST fields.

The above plot is a snippet from my Azure ML run but when I run stuff locally I use Tensorboard.

Just run tensorboard --logdir=runs from your Anaconda console and you can track your metrics during the training.

You can use the translation_script.py and set the --visualize_attention to True to additionally understand what your model was "paying attention to" in the source and target sentences.

Here are the attentions I get for the input sentence Ich bin ein guter Mensch, denke ich.

These belong to layer 6 of the encoder. You can see all of the 8 multi-head attention heads. 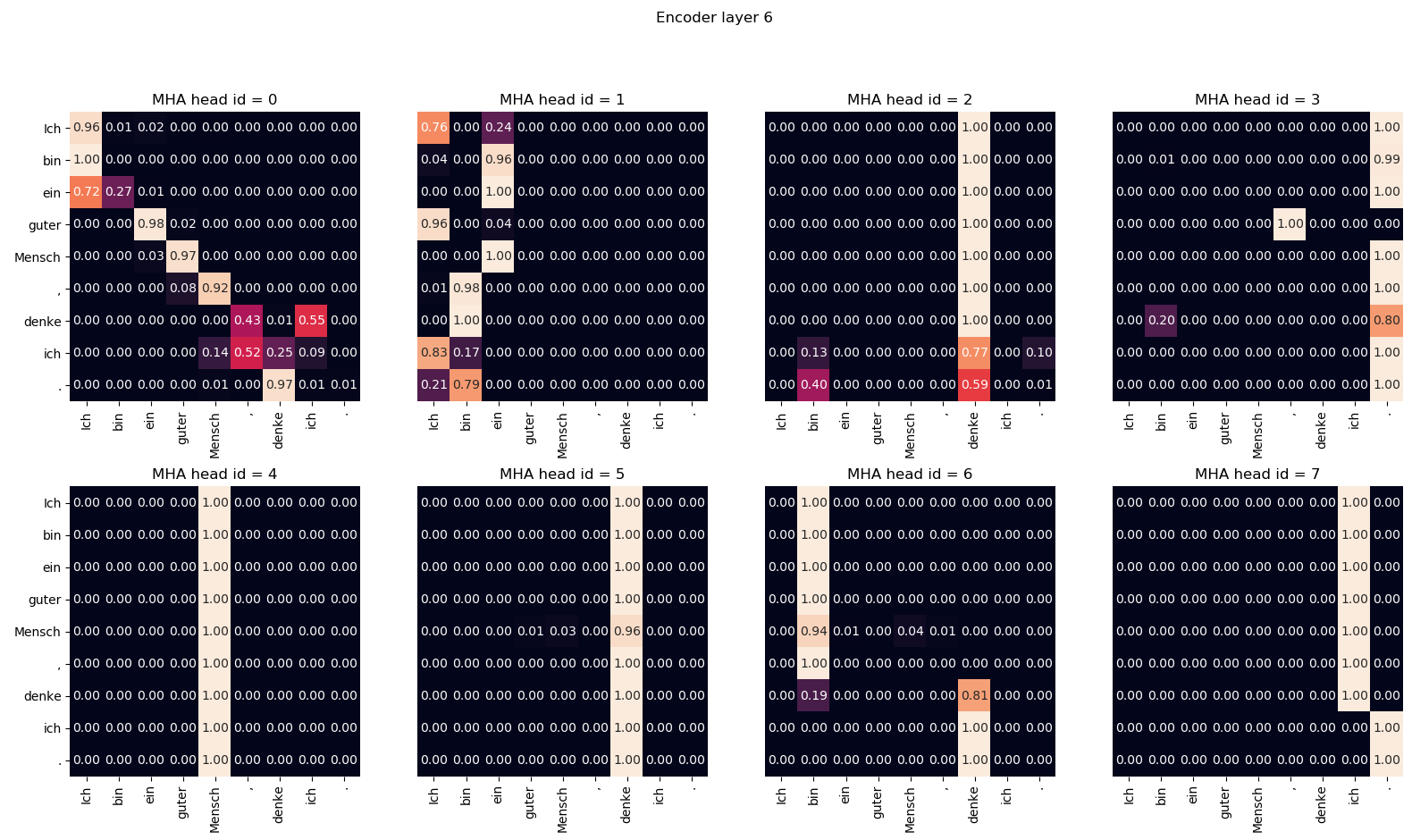 And this one belongs to decoder layer 6 of the self-attention decoder MHA (multi-head attention) module.
You can notice an interesting triangular pattern which comes from the fact that target tokens can't look ahead! 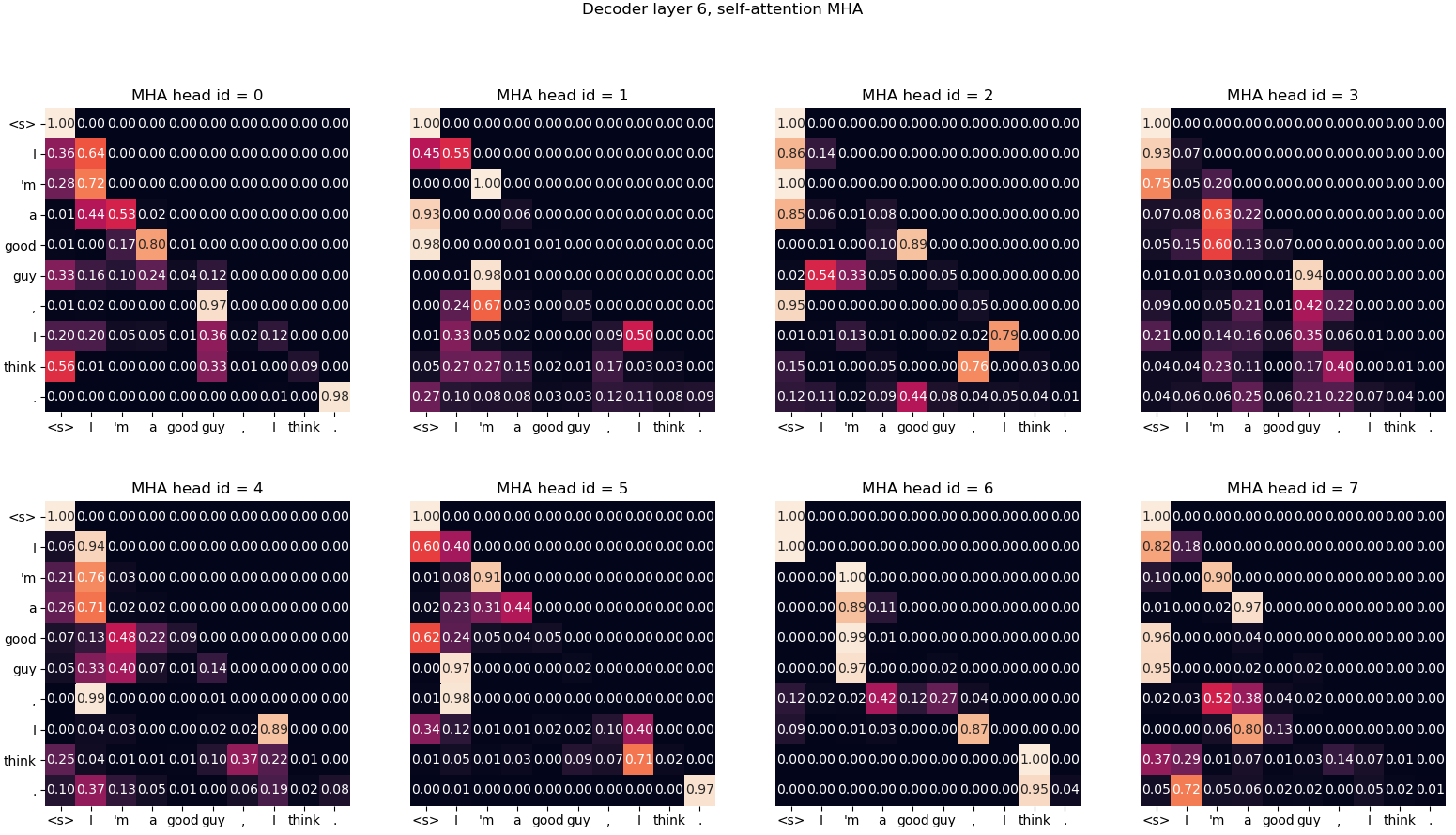 The 3rd type of MHA module is the source attending one and it looks similar to the plot you saw for the encoder.
Feel free to play with it at your own pace!

Note: there are obviously some bias problems with this model but I won't get into that analysis here

You really need a decent hardware if you wish to train the transformer on the WMT-14 dataset.

On the other hand it's much more feasible to train the model on the IWSLT dataset. It took me:

I could have pushed K80s to 3500+ tokens/batch but had some CUDA out of memory problems.

Finally there are a couple more todos which I'll hopefully add really soon:

The repo already has everything it needs, these are just the bonus points. I've tested everything from environment setup, to automatic model download, etc.

If you're having difficulties understanding the code I did an in-depth overview of the paper in this video: 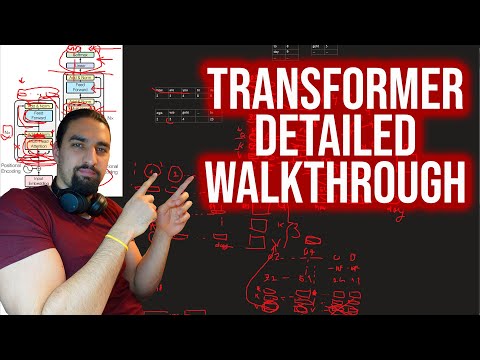 I have some more videos which could further help you understand transformers:

I found these resources useful (while developing this one):

I found some inspiration for the model design in the The Annotated Transformer but I found it hard to understand, and it had some bugs. It was mainly written with researchers in mind. Hopefully this repo opens up the understanding of transformers to the common folk as well! 🤓

If you find this code useful, please cite the following:

If you'd love to have some more AI-related content in your life 🤓, consider: