The library is included in the official Arduino library manger and the optimum way to install it is using the library manager which can be opened by the manage libraries option in Arduino IDE. Search "tm1638" in search bar of library manager to find it.

See link below for instruction for this and for the other methods too.

This library supports three variants of the TM1638, which for purposes of this documentation, will be named Model 1 ,Model 2 and Model 3.

There are two sets of files to support model 1 & 2 . I kept them separate as the models are wired quite different, Model 1 address by digit, while Model 2 address by segment. So the code is quite different for most functions. Model 3 uses same code as Model 1, just different example file and different use of LED functions. Common settings, data and functions are in the TM1638plus_common.x files. 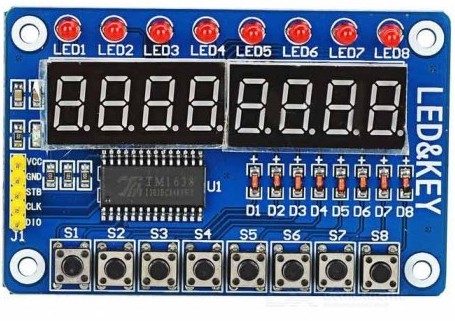 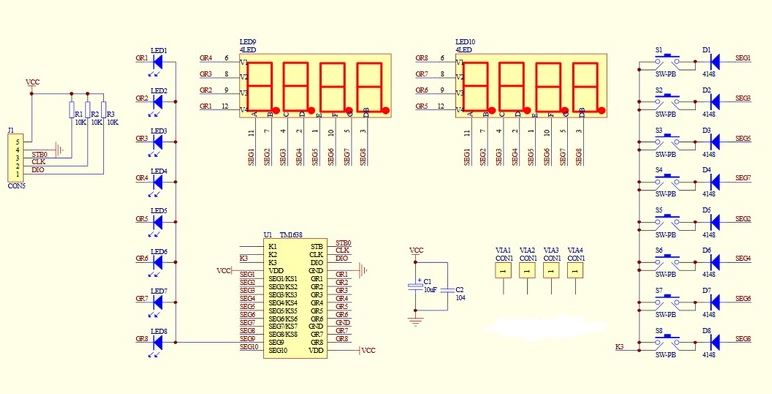 This variant consist of an 8-digit seven segment display with decimal points, 8 Leds and 8 Push buttons. Two 4 digit 3461AS-1 (.34 inch, 4 digit ,common Cathode, decimal point, RED) are used in this module giving a total of 8 digits. A TM1638 controller chip drives the unit. The unit is marked (LED & KEY).

The commented functions can be found in library header file TM1638plus.h. The library support ASCII ,text ,Hex and allows for setting individual segments, and the decimal point of segment. The TM1638plus_TEST.ino contains a set of tests demonstrating library functions. For more information see the commented headers in header file. 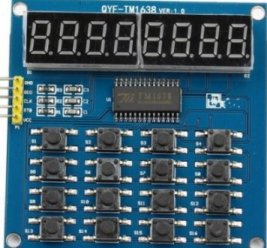 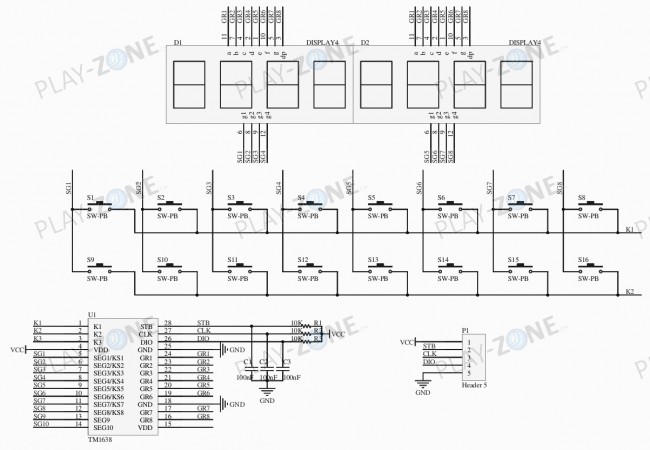 There are different PCB's of these modules on market, This library was tested on no 3 below. I think this software will work for all of them and the differences in PCB are related to connectors, layout and component placement. This module is a variant of Model 1. The differences are the LEDs are bigger and bi-color both red and green, The seven segment display is larger and extra connectors are added for Daisy chaining. Two 4 digit KYX-5461AS-7.3 (.54 inch, 4 digit ,common cathode, decimal point, RED)are used in this module giving a total of 8 digits. 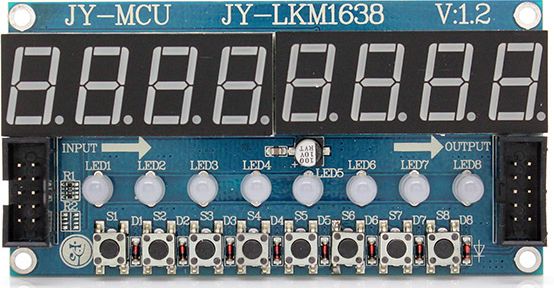 The code is the same as model 1 and there is one unique model 3 example file. setLED and setLEDs functions behaviour is the only difference in code base between 1 and 3. SetLED: The difference is when you call the setLED function you pass the following to get LEDs to change colour. For more detailed information on functions see commented headers in header file(.h).

SetLEDs: When you pass call the setLEDs function you can pass a word pattern where upper byte is turns LEDs green on and lower byte turns LEDs red on . Model one ignores lower byte, Set to 0x00 always.

For Some users using this library the nibbles in information display byte where swapped around. This is because there are different versions of modules on market with different wiring. See issue #3 on github called Swapped display :: "12345678" becomes "56781234". If you test library and you see this issue, in order to fix this when you declare the Object, set the fourth parameter "swap_nibbles" to True, The default is false.

This library uses a software SPI-like protocol and may not work fully on micro-controllers running at a very high frequency, without some adjustments to timing. It is a SPI-like interface with a single bidirectional data wire DIO. The TM1638 is basically a slow SPI device (< 500kHz) in DIO mode. The clock uses the equivalent of SPI mode 3 (normally high, clocks data on the rising edge). The problem is that the native Arduino shiftIn()/shiftOut() wire functions are simply too fast for this device (technically the clock signalling for the TM1638 is inverted but as it triggers on a rising edge still it is tolerant of that). To make this work with fast devices, the shift clocking is slowed with a small delay (on the order of a microsecond).

As of version 1.6 a new parameter (_HIGH_FREQ) has been introduced to constructor it is false by default. Set to true for high frequency MCU ~> 100Mhz. This should fix the issue of HF MCU not reading buttons correctly(ESP-Xs). The High_Freq parameter causes a custom shift-in function to be used. The delay in this function is fixed at 1 uS, it can be changed manually by adjusted the defines in common header file.

The Teensy results have been sent in by email, I don't have these MCU's them at time of writing.

It is possible to drive multiple modules. Share the DIO and CLK lines and use a unique STB line for each device. see issue number 10 at github for example code.