Selenium in Docker with Chrome and Firefox

The purpose of this project is to have Selenium running as simple and as fast as possible.

This purpose is augmented by Zalenium a project which uses this one to provide docker-selenium(s) on-demand.

Note SeleniumHQ/docker-selenium and this one share the same purpose however both projects have diverged considerably in the last two years, some major differences are:

Even though both projects share the same purpose is good to have alternatives, see also for example docker-alpine-selenium. Letting more than 1 docker-selenium project grow to be able to learn from each other's success or failures ultimately impacts the final users positively. This doesn't discard that at some point all selenium maintainers will sit together a sprint to coordinate some major changes and cleanup open issues and perhaps we might merge N similar projects in the future. 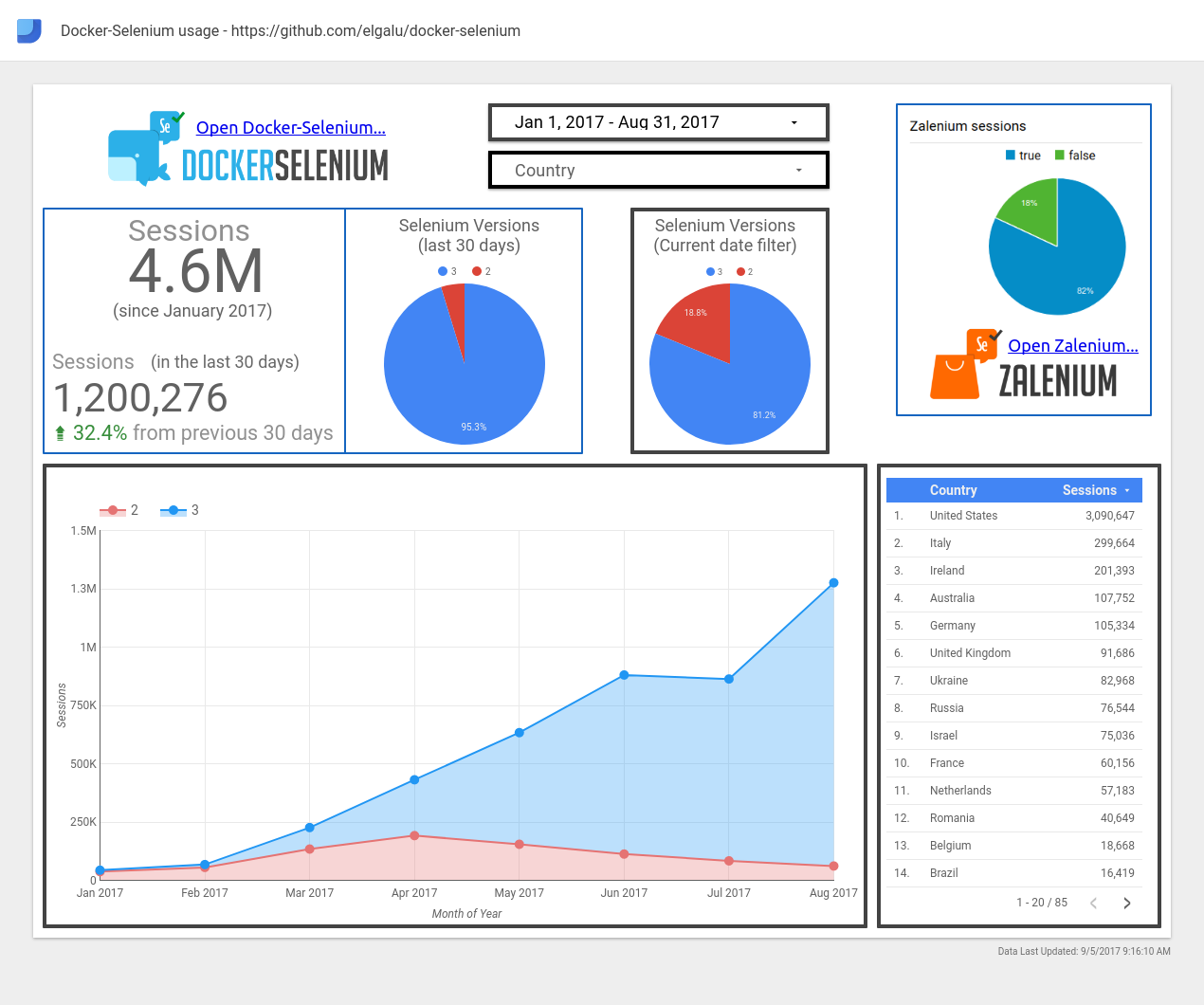 You can also use a paid service like Sauce Labs, BrowserStack or LambdaTest, note they offer free open source accounts and straightforward integration with Travis CI.

This project is normally tested in the last version of Docker and docker-compose and also in the release candidates. To figure out the currently used specific versions it surely works on, see file .travis.yml example values:

If you need to use docker-machine to run docker (like for example on a Mac before the Docker native version 1.12), you also need to install VirtualBox and then run these commands to get started:

You will need to run the second eval command for every new terminal window.

After this, Selenium will be up and ready to accept clients at http://localhost:4444/wd/hub. The grid's available browsers can be viewed by opening the console at http://localhost:4444/grid/console. If you are using Mac (OSX) or Microsoft Windows localhost won't work unless you are in Docker Beta (version >= 1.12) If you are using Docker version <= 1.11 please find out the correct IP through docker-machine ip default.

We now have a better suited product for this use case, is called Zalenium

If you want to limit yourself to this project, you still can. There are some ways to do it:

The drawback is that all tests will run on the same desktop meaning the video recording will only capture the browser in the foreground but it's in the roadmap to make all this transparent, see issues #78 and #77.

Another problem with increasing MAX_INSTANCES & MAX_SESSIONS is focus issues. So in this case is better scale up/down via docker-compose.

If you are in Mac, you need to get the correct IP of the docker machine. One of these two commands should work to get it:

You can set a custom screen size at docker run time by providing SCREEN_WIDTH and SCREEN_HEIGHT environment variables:

You can control and modify the timezone on a container by using the TZ environment variable through the docker run command, e.g. by adding -e TZ="US/Pacific"

This feature was available in previous versions, please go to 2.47.1m to use it.

To configure which Chrome flavor you want to use (stable, beta, unstable), just pass -e CHROME_FLAVOR=beta to docker run. Default is stable.

This feature was available in previous versions, please go to 2.47.1m to use it. To configure which Firefox version to use, first check available versions in the CHANGELOG. Then pass -e FIREFOX_VERSION=38.0.6 to docker run. Default is the latest number of the available list.

Step by step guide at docs/videos.md

If you create the container with -e VIDEO=true it will start recording a video through the vnc connection run upon start. It is recommended to create first a local folder videos in your current directory, and mount the videos directory for an easy transfer with -v $(pwd)/videos:/videos.

Once your tests are done you can either manually stop the recording via docker exec grid /bin-utils/stop-video where grid is just the arbitrary container chosen name in docker run command. Or simply stop the container and that will stop the video recording automatically.

Relevant up-to-date environment variables to customize it are at the Dockerfile, below a possibly outdated list of settings:

It is important to note that ffmpeg video recording takes an important amount of CPU usage, even more when a well compressed format like mp4 is selected.

When you don't specify a VNC password, the new default VNC_PASSWORD=no will make it VNC passwordless accessible.

Disabled by default, noVNC provides a browser VNC client so you don't need to install a vnc viewer if you choose so. Note: we were using guacamole before.

Safari Browser already comes with a built-in vnc viewer so this feature is overkill and is disabled by default, just navigate to vnc://localhost:5900 in your Safari browser.

You need to pass the environment variable -e NOVNC=true in order to start the noVNC service and you will be able to open a browser at localhost:6080

You can provide additional NoVNC options such as ?view_only=false to allow you to interact with the virtual desktop which now is read-only by default so you don't mess with the tests accidentally.

If the VNC password was randomly generated find out with

Same as Chrome, people have reported the shm fix might also be necessary for Firefox.

Chrome not reachable or timeout after 60 secs

In CentOS and apparently since docker 1.10.0 is necessary to disable sandbox mode through --no-sandbox example client implementation.

The error comes along with this message while starting Chrome:

However this is now the default of this image, see CHROME_ARGS="--no-sandbox" in the Dockerfile so don't be surprised to see the "Stability and security will suffer" banner when opening Chrome inside the container.

We now have a better suited product for this use case, is called Zalenium

Using Xephyr to redirect X to the docker host

Note the below method gives full access to the docker container to the host machine.

3 Now when you run your tests instead of connecting. If docker run fails try xhost +

If you git clone this repo locally, i.e. git clone it and cd into where the Dockerfile is, you can:

Note: -v /e2e/uploads:/e2e/uploads is optional in case you are testing browser uploads on your WebApp, you'll probably need to share a directory for this.

The 127.0.0.1:: part is to avoid binding to all network interfaces, most of the time you don't need to expose the docker container like that so just localhost for now.

I like to remove the containers after each e2e test with --rm since this docker container is not meant to preserve state, spawning a new one is less than 3 seconds. You need to think of your docker container as processes, not as running virtual machines in case you are familiar with vagrant.

A dynamic port will be bound to the container ones, i.e.

In case you have RealVNC binary vnc in your path, you can always take a look, view only to avoid messing around your tests with an unintended mouse click or keyboard.

This command line is the same as for Chrome, remember that the selenium running container is able to launch either Chrome or Firefox, the idea around having 2 separate containers, one for each browser is for convenience, plus avoid certain :focus issues your WebApp may encounter during e2e automation.

How to get docker internal IP through logs

First attempt is to use --dns option, e.g.

However this may not work for you and simply want to share the same DNS name resolution than the docker host machine, in which case you should use --net=host along with --pid=host

So --pid=host is included to avoid https://github.com/docker/docker/issues/5899 sudo: unable to send audit message: Operation not permitted

Full example using --net=host and --pid=host but for this to work in OSX you need the latest docker mac package, upgrade if you haven't done so in the last month.

All output is sent to stdout so it can be inspected by running:

Powered by Supervisor, the container leaves many logs;

The image ids also change after scm-source.json has being updated which triggers a cyclic problem so value TBD will be set there and updated in the releases page by navigating into any release tag.

How to get container versions