Automatic rescheduling of the workers on low memory condition for the in-RAM computations is an optional and the only feature that requires an external package, psutil.
All scheduling jobs share the same CPU affinity policy, which is convenient for the benchmarking, but not so suitable for scheduling both single and multi-threaded apps with distinct demands for the CPU cache.

All main functionality is implemented as a single-file module to be easily included into your project and customized as a part of your distribution (like in PyCaBeM to execute muliple apps in parralel on the dedicated CPU cores and avoiding their swapping from the main memory), also it can be installed as a library. An optional minimalistic Web interface is provided in the separate file to inspect and profile the load balancer and execution pool.
The main purpose of the main single-file module is the concurrent execution of modules and external executables with custom resource consumption constraints, cache / parallelization tuning and automatic balancing of the worker processes for the in memory computations on the single server. PyExPool is typically used as an application framework for benchmarking or heavy-loaded multi-process execution activities on constrained computational resources.
If the concurrent execution of Python functions is required, usage of external modules is not a problem and the automatic jobs scheduling for the in-RAM computations is not necessary, then a more handy and straightforward approach is to use Pebble library. A pretty convenient transparent parallel computations are provided by the Joblib. If a distributed task queue is required with advanced monitoring and reporting facilities then Celery might be a good choice. For the comprehensive parallel computing Dask is a good choice. For the parallel execution of only the shell scripts the GNU parallel might be a good option.
The only another existing open-source load balancer I'm aware about, which has wider functionality than PyExPool (but can not be integrated into your Python scripts so seamlessly) is Slurm Workload Manager.

The load balancing is enabled when the global variables _LIMIT_WORKERS_RAM and _CHAINED_CONSTRAINTS are set, jobs .category and relative .size (if known) specified. The balancing is performed to use as much RAM and CPU resources as possible performing in-RAM computations and meeting the specified timeout and memory constraints for each job and for the whole pool.
Large executing jobs can be postponed for the later execution with less number of worker processes after completion of the smaller jobs. The number of workers is reduced automatically (balanced) on the jobs queue processing to meet memory constraints. It is recommended to add jobs in the order of the increasing memory/time complexity if possible to reduce the number of worker processes terminations on jobs postponing (rescheduling).

Demo of the scheduling with memory constraints for the worker processes: 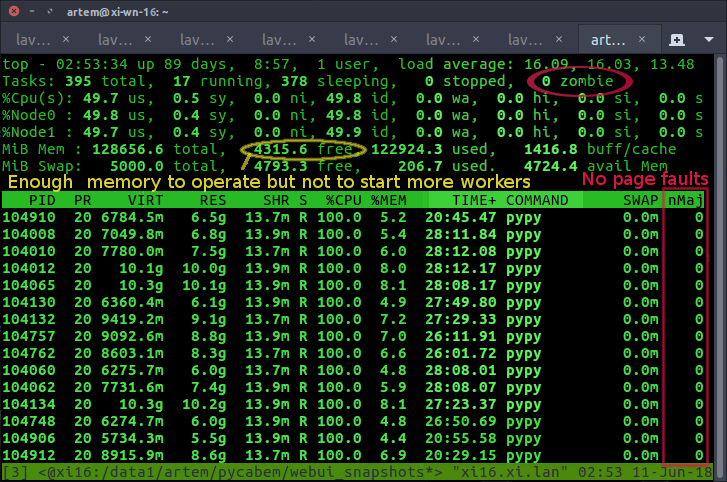 Demo of the scheduling with cache L1 maximization for single-threaded processes on the server with cross-node CPUs enumeration. Whole physical CPU core consisting of two hardware threads assigned to each worker process, so the L1 cache is dedicated (not shared), but the maximal loading over all CPUs is 50%: 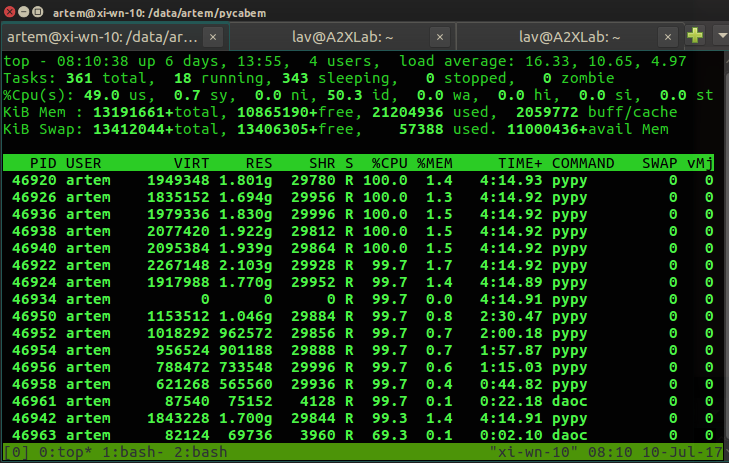 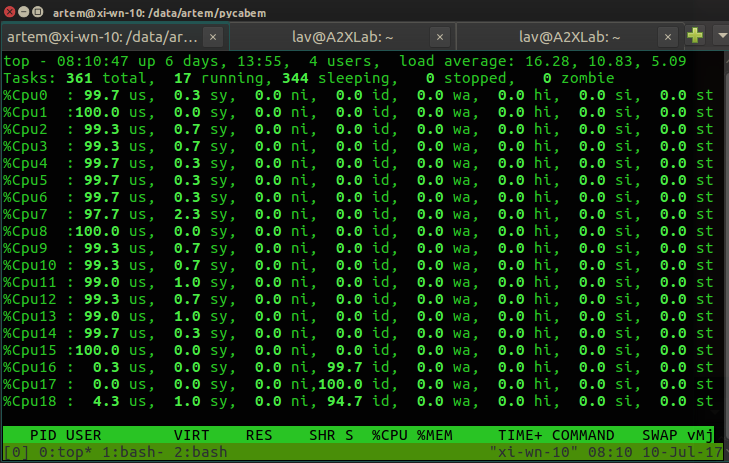 Demo of the WebUI for the Jobs and Tasks tracing and profiling: 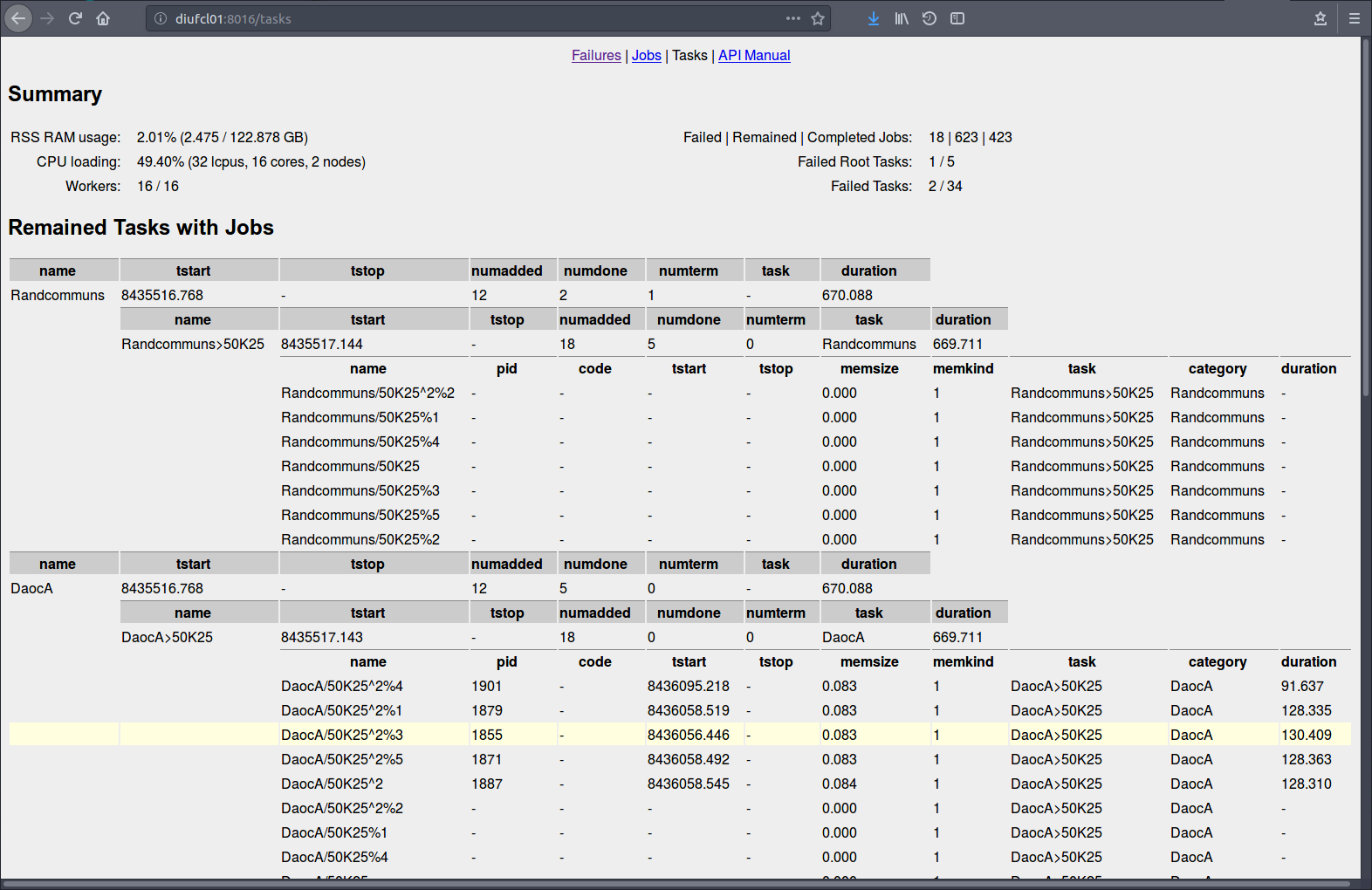 Exactly the same fully functional interface is accessible from the console using w3m or other terminal browsers: 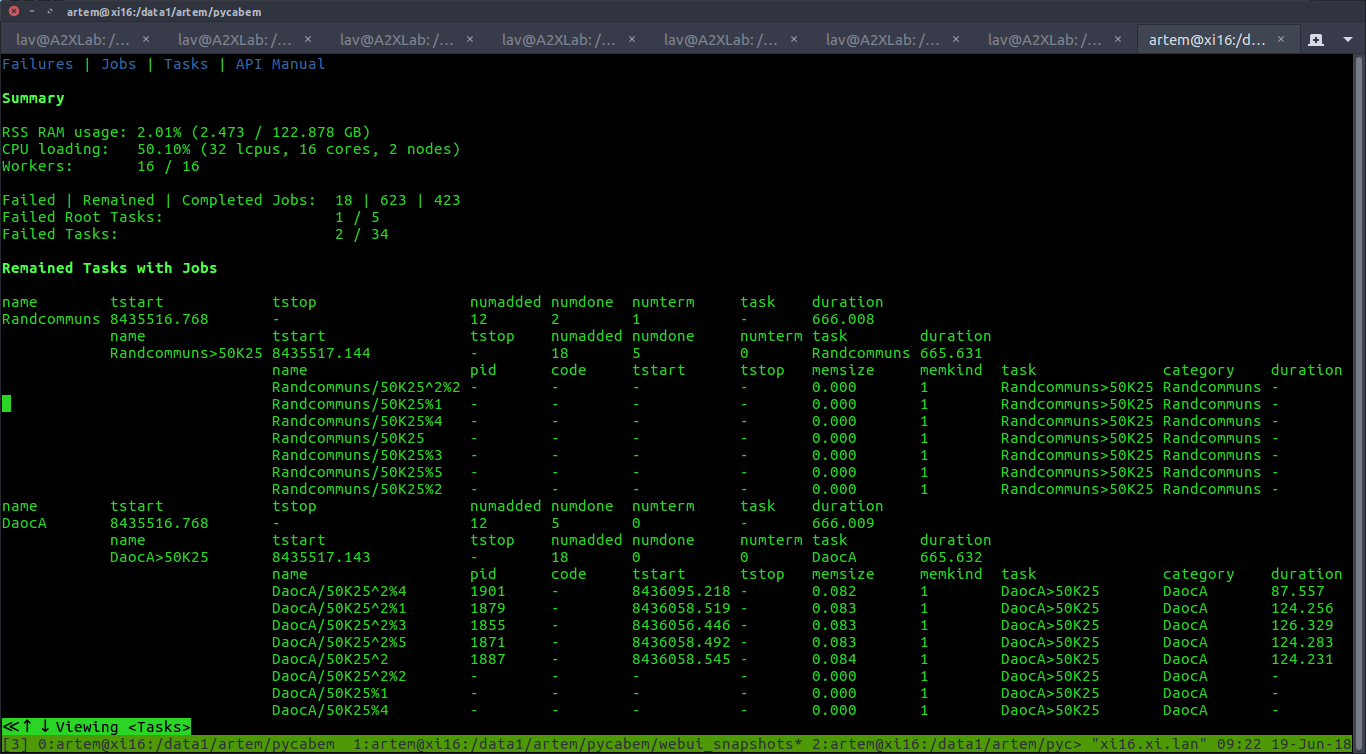 To explore the WebUI demo execute the following testcase

Include the following modules:

These modules can be install either manually from GitHub or from the pypi repository:

WebUI(mpewui module) renders interface from the bottle html templates located in the ., ./views/ or any other folder from the bottle.TEMPLATE_PATH list, where custom views can be placed to overwrite the default pages.

Multi-Process Execution Pool can be run without any external modules with automatically disabled load balancing.
The external modules / apps are required only for the extended functionality:

All Python requirements are optional and installed automatically from the pip distribution ($ pip install pyexpool) or can be installed manually from the pyreqsopt.txt file:

lstopo app of hwloc package is a system requirement and should be installed manually from the system-specific package repository or built from the sources.

Flexible API provides automatic CPU affinity management, maximization of the dedicated CPU cache, limitation of the minimal dedicated RAM per worker process, balancing of the worker processes and rescheduling of chains of the related jobs on low memory condition for the in-RAM computations, optional automatic restart of jobs on timeout, access to job's process, parent task, start and stop execution time and more...
ExecPool represents a pool of worker processes to execute Jobs that can be grouped into the hierarchy of Taskss for more flexible management.

A simple Web UI is designed to profile Jobs and Tasks, interactively trace their failures and resource consumption. It is implemented in the optional module mpewui and can be spawned by instantiating the WebUiApp class. A dedicated WebUiApp instance can be created per each ExecPool, serving the interfaces on the dedicated addresses (host:port). However, typically, a single global instance of WebUiApp is created and supplied to all employed ExecPool instances.
Web UI module requires HTML templates installed by default from the pip distribution, which can be overwritten with the custom pages located in the views directory.

See WebUI queries manual for API details. An example of the WebUI usage is shown in the mpetests.TestWebUI.test_failures of the mpetests.

WebUiApp instance works in the dedicated thread of the load balancer application and designed for the internal profiling with relatively small number of queries but not as a public web interface for the huge number of clients.
WARNING: high loading of the WebUI may increase latency of the load balancer.

Target version of the Python is 2.7+ including 3.x, also works fine on PyPy.

The workflow consists of the following steps:

In case the execution pool is required locally then it can be used in the following way:

The code shown above is fetched from the TestProcMemTree unit test.

Also it is recommended to register the termination handler for the normal interpreter termination using atexit:

Note: Please, star this project if you use it.