[June 28, 2021] Updates: we will release an extended version, which improves 6.3 points of F1 on CULane with the ResNet-18 backbone compared with the ECCV version.

Updates: Our paper has been accepted by ECCV2020.

The evaluation code is modified from SCNN and Tusimple Benchmark.

Caffe model and prototxt can be found here. 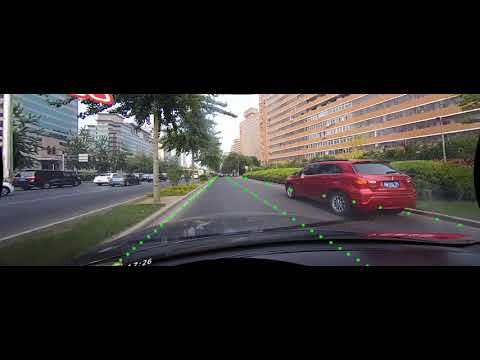 Since our code has auto backup function which will copy all codes to the log_path according to the gitignore, additional temp file might also be copied if it is not filtered by gitignore, which may block the execution if the temp files are large. So you should keep the working directory clean.

Besides config style settings, we also support command line style one. You can override a setting like

The batch_size will be set to 8 during training.

We provide two trained Res-18 models on CULane and Tusimple.

We provide a script to visualize the detection results. Run the following commands to visualize on the testing set of CULane and Tusimple.

Since the testing set of Tusimple is not ordered, the visualized video might look bad and we do not recommend doing this.

To test the runtime, please run

It will loop 100 times and calculate the average runtime and fps in your environment.

Thanks zchrissirhcz for the contribution to the compile tool of CULane, KopiSoftware for contributing to the speed test, and ustclbh for testing on the Windows platform.