Extract, transform, and load (ETL) operations collectively form the backbone of any modern enterprise data lake. It transforms raw data into useful datasets and, ultimately, into actionable insight. An ETL job typically reads data from one or more data sources, applies various transformations to the data, and then writes the results to a target where data is ready for consumption. The sources and targets of an ETL job could be relational databases in Amazon Relational Database Service (Amazon RDS) or on-premises, a data warehouse such as Amazon Redshift, or object storage such as Amazon Simple Storage Service (Amazon S3) buckets. Amazon S3 as a target is especially commonplace in the context of building a data lake in AWS.

AWS offers AWS Glue, which is a service that helps author and deploy ETL jobs. AWS Glue is a fully managed extract, transform, and load service that makes it easy for customers to prepare and load their data for analytics. Other AWS Services also can be used to implement and manage ETL jobs. They include: AWS Database Migration Service (AWS DMS), Amazon EMR (using the Steps API), and even Amazon Athena.

The challenge of orchestrating an ETL workflow

How can we orchestrate an ETL workflow that involves a diverse set of ETL technologies? AWS Glue, AWS DMS, Amazon EMR, and other services support Amazon CloudWatch Events, which we could use to chain ETL jobs together. Amazon S3, the central data lake store, also supports CloudWatch Events. But relying on CloudWatch Events alone means that there's no single visual representation of the ETL workflow. Also, tracing the overall ETL workflow's execution status and handling error scenarios can become a challenge.

In this code sample, I show you how to use AWS Step Functions and AWS Lambda for orchestrating multiple ETL jobs involving a diverse set of technologies in an arbitrarily-complex ETL workflow. AWS Step Functions is a web service that enables you to coordinate the components of distributed applications and microservices using visual workflows. You build applications from individual components. Each component performs a discrete function, or task, allowing you to scale and change applications quickly. Using AWS Step Functions also opens up opportunities for integrating other AWS or external services into your ETL flows. Let’s take an example ETL flow for illustration.

For our example, we'll use two publicly-available Amazon QuickSight datasets. The first dataset is a sales pipeline dataset (Sales dataset) that contains a list of slightly above 20K sales opportunity records for a fictitious business. Each record has fields that specify:

The second dataset is an online marketing metrics dataset (Marketing dataset). The data set contains records of marketing metrics, aggregated by day. The metrics describe user engagement across various channels (website, mobile, and social media) plus other marketing metrics. The two data sets are unrelated, but we’ll assume that they are for the purpose of this example.

Imagine there’s a business user who needs to answer questions based on both datasets. Perhaps the user wants to explore the correlations between online user engagement metrics on the one hand, and forecasted sales revenue and opportunities generated on the other hand. The user engagement metrics include website visits, mobile users, and desktop users.

The steps in the ETL flow chart are:

So far, this ETL workflow can be implemented with AWS Glue, with the ETL jobs being chained by using job triggers. But you might have other requirements outside of AWS Glue that are part of your end-to-end data processing workflow, such as the following:

The data engineer takes these requirements and builds the following ETL workflow chart. 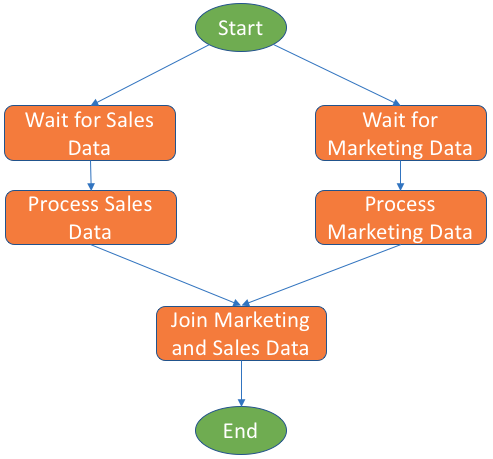 The ETL orchestration architecture and events

Let’s see how we can orchestrate such an ETL flow with AWS Step Functions, AWS Glue, and AWS Lambda. The following diagram shows the ETL orchestration architecture in action.

The main flow of events starts with an AWS Step Functions state machine. This state machine defines the steps in the orchestrated ETL workflow. A state machine can be triggered through Amazon CloudWatch based on a schedule, through the AWS Command Line Interface (AWS CLI), or using the various AWS SDKs in an AWS Lambda function or some other execution environment.

As the state machine execution progresses, it invokes the ETL jobs. As shown in the diagram, the invocation happens indirectly through intermediary AWS Lambda functions that you author and set up in your account. We'll call this type of function an ETL Runner.

The following snapshot from the AWS Step Functions console shows our example ETL workflow modeled as a state machine. This workflow is what we provide you in the code sample. 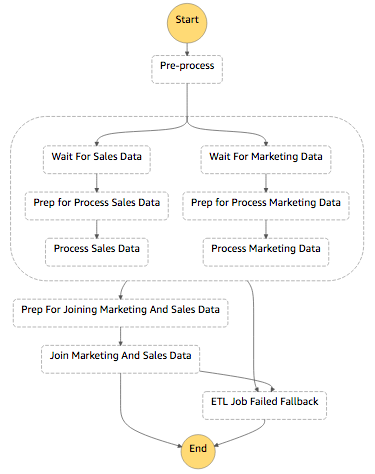 When you start an execution of this state machine, it will branch to run two ETL jobs in parallel: Process Sales Data (PSD) and Process Marketing Data (PMD). But, according to the requirements, both ETL jobs should not start until their respective datasets are uploaded to Amazon S3. Hence, we implement Wait activity tasks before both PSD and PMD. When a dataset file is uploaded to Amazon S3, this triggers an AWS Lambda function that notifies the state machine to exit the Wait states. When both PMD and PSD jobs are successful, the JMSD job runs to produce the final dataset.

Finally, to have this ETL workflow execute once per week, you will need to configure a state machine execution to start once per week using a CloudWatch Event.

In this code sample, there are three separate AWS CloudFormation templates. You may choose to structure your own project similarly.

For our ETL example, the step-functions-resources.yaml CloudFormation template creates a State Machine named MarketingAndSalesETLOrchestrator. You can start an execution from the AWS Step Functions console, or through an AWS CLI command.

What if a job in the ETL workflow fails? In such a case, there are error-handling strategies available to the ETL workflow developer, from simply notifying an administrator, to fully undoing the effects of the previous jobs through compensating ETL jobs. Detecting and responding to a failed Glue job can be implemented using AWS Step Functions' Catch mechanism, which is explained in this tutorial. In this code sample, this state is a do-nothing Pass state. You can change that state into a Task state that triggers your error-handling logic in an AWS Lambda function.

NOTE: To make this code sample easier to setup and execute, build scripts and commands are included to help you with common tasks such as creating the above AWS CloudFormation stacks in your account. Proceed below to learn how to setup and run this example orchestrated ETL flow.

Here’s a high-level checklist of what you need to do to setup your development environment.

The IAM User can be the Administrator User you created in Step 1.

This section list configuration files, parameters within them, and parameter default values. The build commands (detailed later) and CloudFormation templates extract their parameters from these files. Also, the Glue Runner AWS Lambda function extract parameters at runtime from gluerunner-config.json.

NOTE: Do not remove any of the attributes already specified in these files.

NOTE: You must set the value of any parameter that has the tag NO-DEFAULT

Specifies parameters for creation of the gluerunner-lambda CloudFormation stack (as defined in gluerunner-lambda.yaml template). It is also used by several build scripts, including createstack, and updatestack.

Specifies parameters for creation of the gluerunner-lambda CloudFormation stack (as defined in gluerunner-lambda.yaml template). It is also used by several build scripts, including createstack, and updatestack.

Specifies the S3 buckets and prefixes for the Glue Runner lambda function (and other functions that may be added later). It is used by the deploylambda build script.

Specifies parameters for creation of the glue-resources CloudFormation stack (as defined in glue-resources.yaml template). It is also read by several build scripts, including createstack, updatestack, and deploygluescripts.

The parameters are used by AWS CloudFormation during the creation of glue-resources stack.

Both parameters are also used by AWS CloudFormation during stack creation.

Common interactions with the project have been simplified for you. Using pynt, the following tasks are automated with simple commands:

For a list of all available tasks, enter the following command in the base directory of this project:

Build commands are implemented as Python scripts in the file build.py. The scripts use the AWS Python SDK (Boto) under the hood. They are documented in the following section.

Prior to using these build commands, you must configure the project.

Run this command to package the Glue Runner AWS Lambda function and its dependencies into a .zip package. The deployment packages are created under the build/ directory.

Run this command before you run createstack. The deploylambda command uploads Glue Runner .zip package to Amazon S3 for pickup by AWS CloudFormation while creating the gluerunner-lambda stack.

Note that for gluerunner-lambda stack, you must first package and deploy Glue Runner function to Amazon S3 using the packagelambda and then deploylambda commands for the AWS CloudFormation stack creation to succeed.

For a complete example, please refer to the 'Putting it all together' section.

Stack creation should take a few minutes. At any time, you can check on the prototype's stack status either through the AWS CloudFormation console or by issuing the following command.

The updatestack command updates any of the projects AWS CloudFormation stacks. Valid parameters to this command are glue-resources, gluerunner-lambda, step-functions-resources.

You can issue the updatestack command as follows.

The deletestack command, calls the AWS CloudFormation delete_stack() API to delete a CloudFormation stack from your account. You must specify a stack to delete. Valid values are glue-resources, gluerunner-lambda, step-functions-resources

You can issue the deletestack command as follows.

As with createstack, you can check the status of stack deletion using the stackstatus build command.

You can issue the deploygluescripts command as follows.

Putting it all together: Example usage of build commands

Now head to the AWS Step Functions console. Start and observe an execution of the 'MarketingAndSalesETLOrchestrator' state machine. Execution should halt at the 'Wait for XYZ Data' states. At this point, you should upload the sample .CSV files under the samples directory to the S3 bucket you specified as the DataBucketName parameter value in step-functions-resources-config.json configuration file. Upload the marketing sample file under prefix 'marketing' and the sales sample file under prefix 'sales'. To do that, you may issue the following AWS CLI commands while at the project's root directory:

This should allow the state machine to move on to next steps -- Process Sales Data and Process Marketing Data.

If you have setup and run the sample correctly, you should see this output in the AWS Step Functions console: 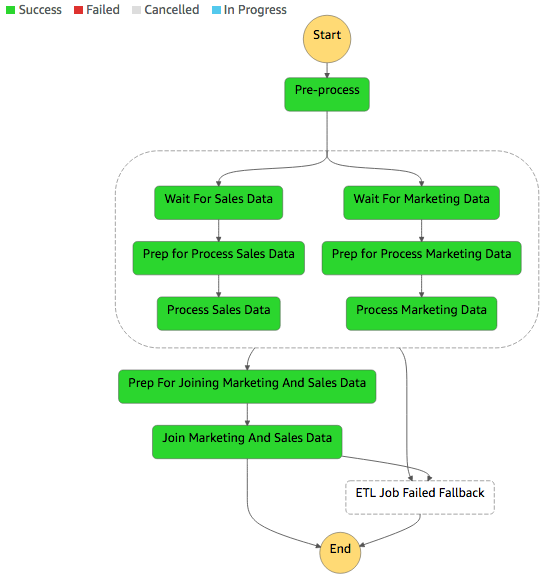 This indicates that all jobs have been run and orchestrated successfully.

This project is licensed under the MIT-No Attribution (MIT-0) license.

A copy of the License is located at