The Wikipedia article about it describes it best:

Return-oriented programming (ROP) is a computer security exploit technique that allows an attacker to execute code in the presence of security defenses such as executable space protection and code signing.[1]

In this technique, an attacker gains control of the call stack to hijack program control flow and then executes carefully chosen machine instruction sequences that are already present in the machine's memory, called "gadgets".[2] Each gadget typically ends in a return instruction and is located in a subroutine within the existing program and/or shared library code. Chained together, these gadgets allow an attacker to perform arbitrary operations on a machine employing defenses that thwart simpler attacks.

The TL;DR is that return-oriented programming (ROP) is a commonly used technique in exploitation to gain code execution

look below at Compiler output


So hopefully this cheat will be VAC / PB undetected for ever 😉

You can download a compiled binary of the Rop-Compiler from here:

In computer science a Words size is determined by the maximal number of bits the processor can process
But Intel and Microsoft define a word as a 16bit number:

The instruction set is very limited and can be found in the >>Gadgets.h<< header

it's very rare to find a comparison instruction followed by a return, so I am using a trick:

a substraction in x86 also effects the flags.
so for example:

the ZeroFlag will be set to 1 by the substraction instruction.

Get address of jump label

Get address of Gadget

Get address of API function

the compiler will translate it to (each line a single gadget)

note that ebx can't be written directly to a virtual register

the compiler will translate it to (each line a single gadget)

note that a jump overwrites the ebx register!
look at the function addJumpToRopChain but basically its using a conditional move

only that a conditional move directly to esp is very rare so it's utilizing exchange instructions to be able to use a more commonly used instruction like this: 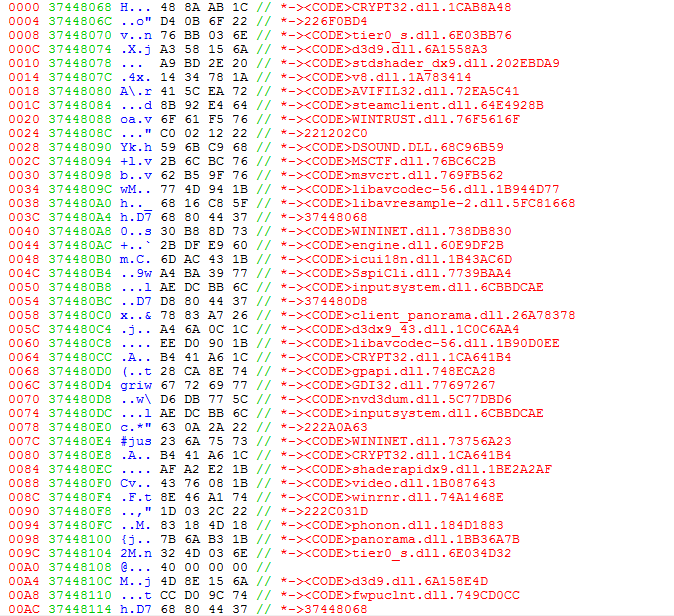 Now on the right I added the assembler code that is at each address: 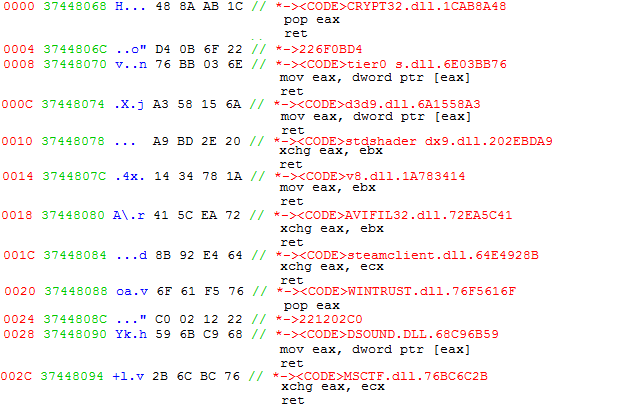 For a Tutorial on ReClass look at UC
https://www.unknowncheats.me/forum/general-programming-and-reversing/120805-reclass-usuage-reclass-and-its-content.html

the return instruction is essential for ROP.
The CPU jumps ( by setting the InstructionPointer [on x86 EIP] ) to an address it reads from the stack
to help understanding the instruction this how the CPU processes the ret instruction:

gadgets for pop instructions are easy to find and can be used to set a register to a certain value
to help understanding the instruction this how the CPU processes the pop eax instruction:

for unconditional jumps a pop esp or a xchg esp, ebx can be used