🗺️ Qwant Maps is a map application that respects your privacy 🔍 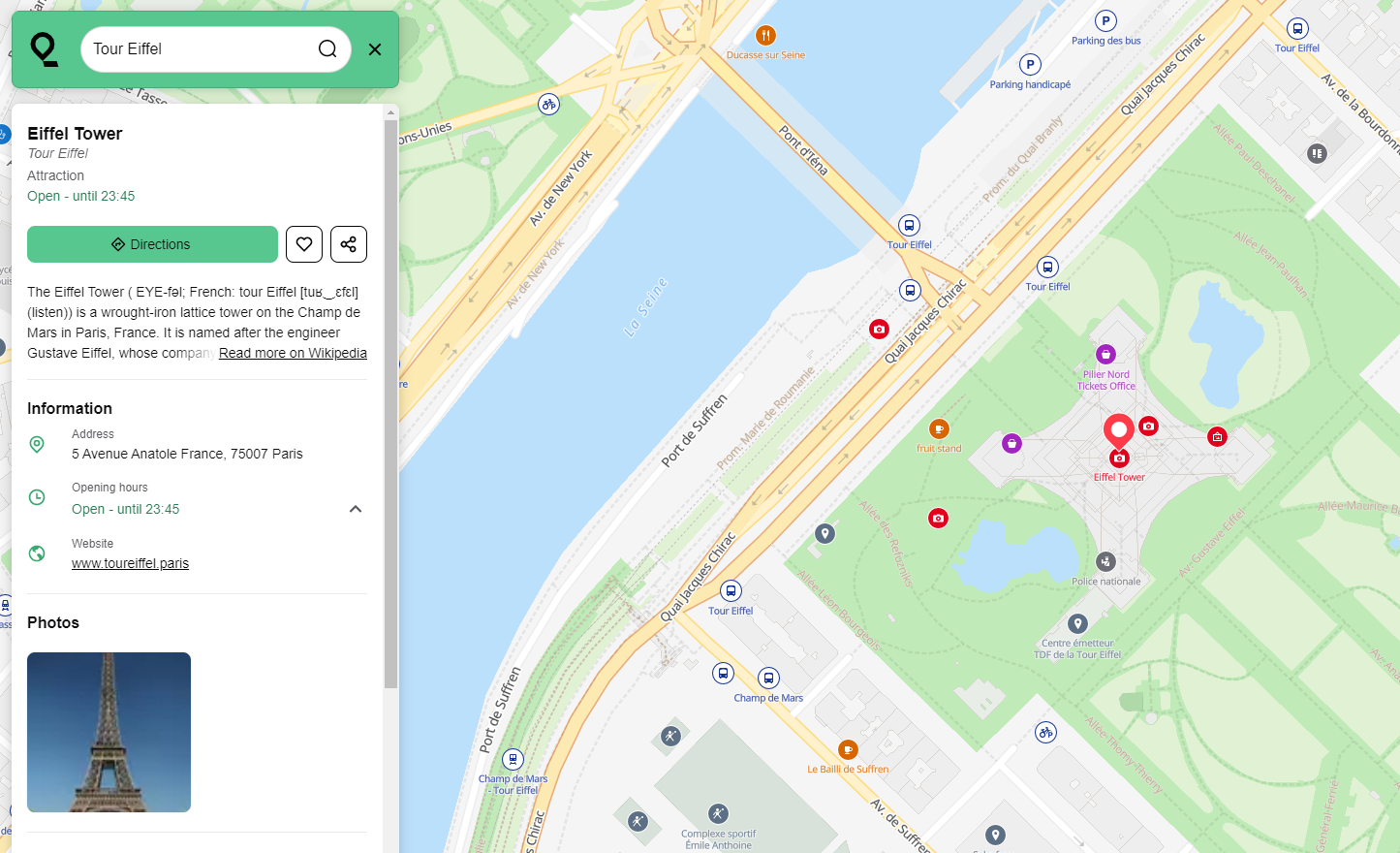 Qwant Maps provides links you can share with your friends to help them to #SwitchToQwant and #SwitchToOSM. For instance you can:

The parameters corresponding to this endpoint are the following:

Qwant Maps can be seen as 4 separated components:

A tile server is a service whose job is to give all that is needed to display a fraction of a map.

Qwant Maps provides only vector tiles so the tile server does not serve images (as it is done with raster tiles) but raw data. It is the front end, Erdapfel, that takes the data and renders it into a user browsable map.

The tile server is a combination of 2 great opensource projects:

OpenMapTiles makes it possible for Qwant Maps to have an easy to define/extend vector tile schema.

All the data (see below) are imported in a PostgreSQL database using mainly imposm. All the world's vector tiles are then generated using kartotherian's tilerator and stored in Cassandra. This enables Qwant Maps to have a fast and scalable way to serve tiles.

Mimirsbrunn is a geocoder based on Elasticsearch and rust components developed by Kisio Digital.

To get more details on places and Points Of Interest (POIs), Qwant Maps uses an additional API: Idunn, that combines the information in the geocoder with external APIs to format detailed POIs data to display in the front end.

Qwant Maps's front, Erdapfel, is a Javascript single page app that allows to browse the map, search for places, see your position on the map, etc.

The front end uses Mapbox GL to render the map, using both the tiles from the tile server, and Qwant Maps custom map style.

The main source of data for the tile server is the awesome OpenStreetMap (OSM) data ❤️ but other data like natural earth, better water polygon... are also used.

All the tile's data import process is defined in python scripts.

This tool imports all the data into the PostgreSQL database and runs lots of post-process SQL functions (those functions are defined as postgresql triggers), so they will also be able to run on the OSM updates.

When the data is loaded in PostgreSQL, we use tilerator to generate all the tiles from the zoom level 0 to 14 and store them in Cassandra. This way, when a vector tile is requested to the tiles API kartotherian, no computation needs to be done, only a simple query by id on the highly available Cassandra to get the raw protobuf tiles stored in it.

The data import process in Mimirsbrunn is defined in a python script.

First, the OSM data is given to Cosmogony which outputs a big JSON file with all the world's administrative regions.

This file is then imported in Mimir by cosmogony2mimir.

We then import addresses using addresses-importer. It downloads datasets of addresses (from OpenAddresses and OpenStreetMap mostly), deduplicate them and then import them into our geocoder using openaddresses2mimir.

The streets are imported afterwards from the OSM pbf file with osm2mimir.

Finally the POIs are extracted from the PostgreSQL database (thus we have a unified POI handling) using Fafnir.

Idunn does not need its own data import process, but the API depends on:

The world keeps moving and OpenStreetMap data is getting better and better every day, so we need to update the data in all our components on a regular basis. The import of the world's data is quite a long process, so after the initial import, a dedicated task is used to read the OSM differential updates and apply the changes in the PostgreSQL database on a daily basis.

Once we have up-to-date data in PostgreSQL, we can import again the geocoder POIs data and regenerate the tiles impacted by the changes.

We update the remaining geocoder data (administrative regions, streets and addresses) on a monthly basis.

NB: To provide the Qwant Maps service, Qwant hosts instances of the tile server, the geocoder and the Idunn API on its own servers.

Please note that Qwant instances are internal components and are not meant (yet) to be used directly other than as part of Qwant Maps. You can learn more in our Terms of services

To run the tileserver, the easiest way is to use Docker.

The project kartotherian_docker provides a docker-compose with all that is needed.

The repository docker_mimir contains a docker-compose to easily spawn the needed Docker containers and to import the needed data in them.

Idunn is a custom Python API for Qwant Maps places and features (based on FastAPI).

The readme details the way to run it.

Erdapfel is a simple node application but you can also use Docker to run it.

You will need to set a few environment variables to link it to the other Qwant Maps components. Check out the readme to know more about its configuration.