This repository contains code to instantiate and deploy a text sentiment classifier. This model is able to detect whether a text fragment leans towards a positive or a negative sentiment. Optimal input examples for this model are short strings (preferably a single sentence) with correct grammar, although not a requirement.

The model is based on the pre-trained BERT-Base, English Uncased model and was fine-tuned on the IBM Claim Stance Dataset. The model files are hosted on IBM Cloud Object Storage. The code in this repository deploys the model as a web service in a Docker container. This repository was developed as part of the IBM Developer Model Asset Exchange and the public API is powered by IBM Cloud.

In the table below, the prediction accuracy of the model on the test sets of three different datasets is listed.

The first row showcases the generalization power of our model after fine-tuning on the IBM Claims Dataset. The Sentiment140 (Tweets) and IMDB Reviews datasets are only used for evaluating the transfer-learning capabilities of this model. The implementation in this repository was not trained or fine-tuned on the Sentiment140 or IMDB reviews datasets.

The second row describes the performance of the BERT-Base (English - Uncased) model when fine-tuned on the specific task. This was done simply for reference, and the weights are therefore not made available.

The generalization results (first row) are very good when the input data is similar to the data used for fine-tuning (e.g. Sentiment140 (tweets) when fine-tuned on the IBM Claims Dataset). However, when a different style of text is given as input, and with a longer median length (e.g. multi-sentence IMDB reviews), the results are not as good.

This will pull a pre-built image from the Quay.io container registry (or use an existing image if already cachedlocally) and run it. If you'd rather checkout and build the model locally you can follow the run locally steps below.

You can deploy the model-serving microservice on Red Hat OpenShift by following the instructions for the OpenShift web console or the OpenShift Container Platform CLI in this tutorial, specifying quay.io/codait/max-text-sentiment-classifier as the image name.

Note that this model requires at least 4GB of RAM. Therefore this model will not run in a cluster that was provisioned under the OpenShift Online starter plan, which is capped at 2GB.

You can also deploy the model on Kubernetes using the latest docker image on Quay.

On your Kubernetes cluster, run the following commands:

The model will be available internally at port 5000, but can also be accessed externally through the NodePort.

A more elaborate tutorial on how to deploy this MAX model to production on IBM Cloud can be found here.

Clone this repository locally. In a terminal, run the following command:

Change directory into the repository base folder:

All required model assets will be downloaded during the build process. Note that currently this docker image is CPU only (we will add support for GPU images later).

The API server automatically generates an interactive Swagger documentation page. Go to http://localhost:5000 to load it. From there you can explore the API and also create test requests.

Use the model/predict endpoint to submit input text in json format. The json structure should have one key, text, with as value a list of input strings to be analyzed. An example can be found in the image below.

Submitting proper json data triggers the model and will return a json file with a status and a predictions key. With this predictions field, a list of class labels and their corresponding probabilities will be associated. The first element in the list corresponds to the prediction for the first string in the input list. 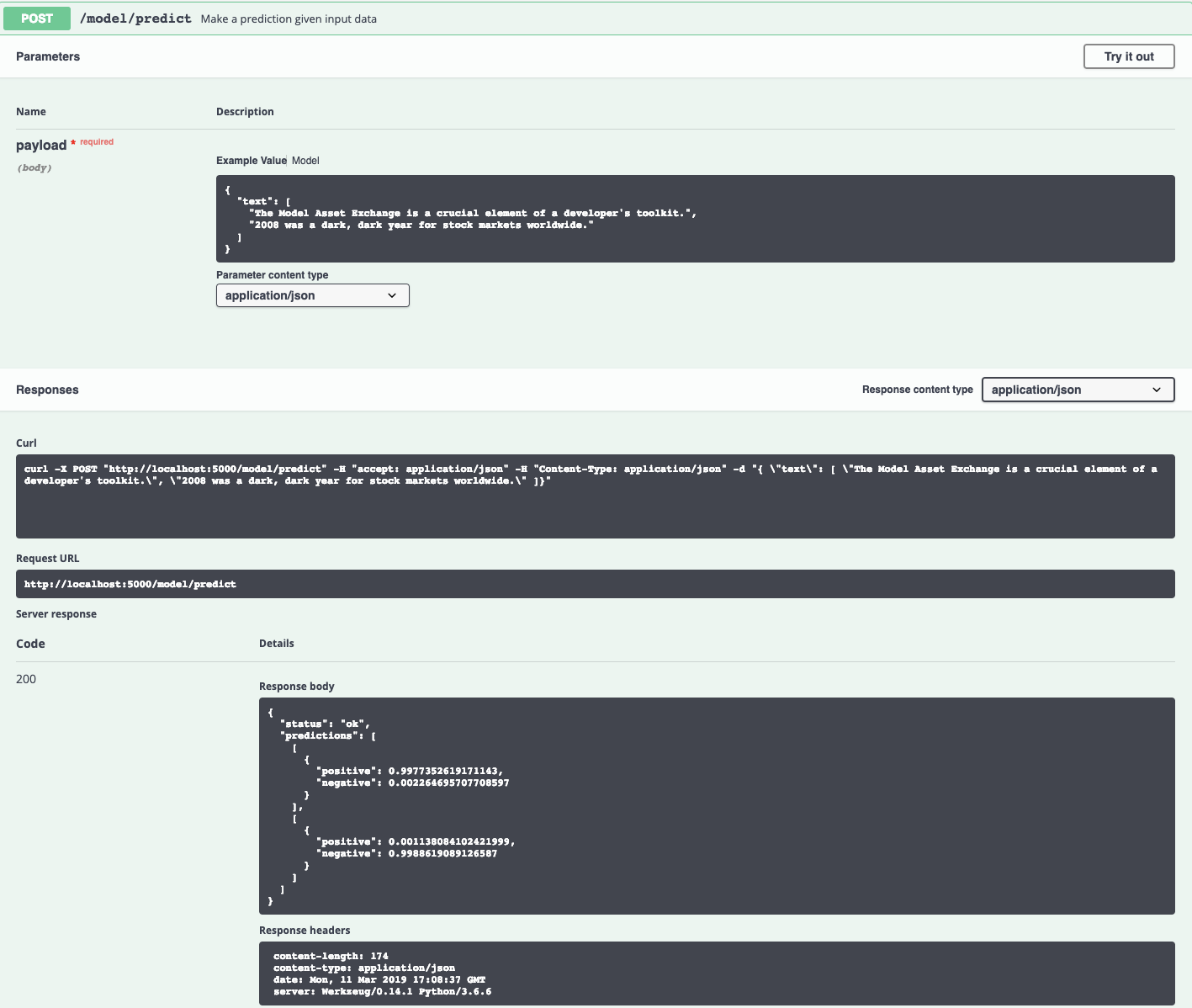 You can also test it on the command line, for example:

You should see a JSON response like that below:

To run the Flask API app in debug mode, edit config.py to set DEBUG = True under the application settings. You will then need to rebuild the docker image (see step 1).

To stop the Docker container, type CTRL + C in your terminal.

This model supports both fine-tuning with transfer learning and training from scratch on a custom dataset. Please follow the steps listed under the training README to retrain the model on Watson Machine Learning, a deep learning as a service offering of IBM Cloud.

If you are interested in contributing to the Model Asset Exchange project or have any queries, please follow the instructions here.