Nabla (previously called IrrlichtBaW ) is a new renovated version of older Irrlicht engine. The name change to Nabla allows for using Nabla side by side with the legacy Irrlicht and IrrlichtBaW engines. The project currently aims for a thread-able and Vulkan-centered API, the Vulkan backend is almost complete, and OpenGL and ES backends are currently in maintenance mode.

This framework has been kindly begun by the founder @devshgraphicsprogramming of Devsh Graphics Programming Sp. z O.O. and was almost entirely sponsored by Build A World Aps in its early days, now it has been picked up by Ditt B.V..

(Get Hired) Jobs and Internships

If you are a programmer with a passion for High Performance Computing, Mathematics and Computer Graphics

Then make something impressive using Nabla, open a PR and contact us (jobs devsh.eu) with your CV.

We would also be happy to sponsor your master or bachelor thesis as long as:

We provide expertise in:

Our language of choice is C++17 with C++11 and C11 coming in close second, however we're also amenable to C#, Java, Python and related languages.

Our Production Mitsuba Compatible Path Tracer made for Ditt B.V.

Currently working on the ditt branch, in the process of being ported to Vulkan KHR Raytracing. 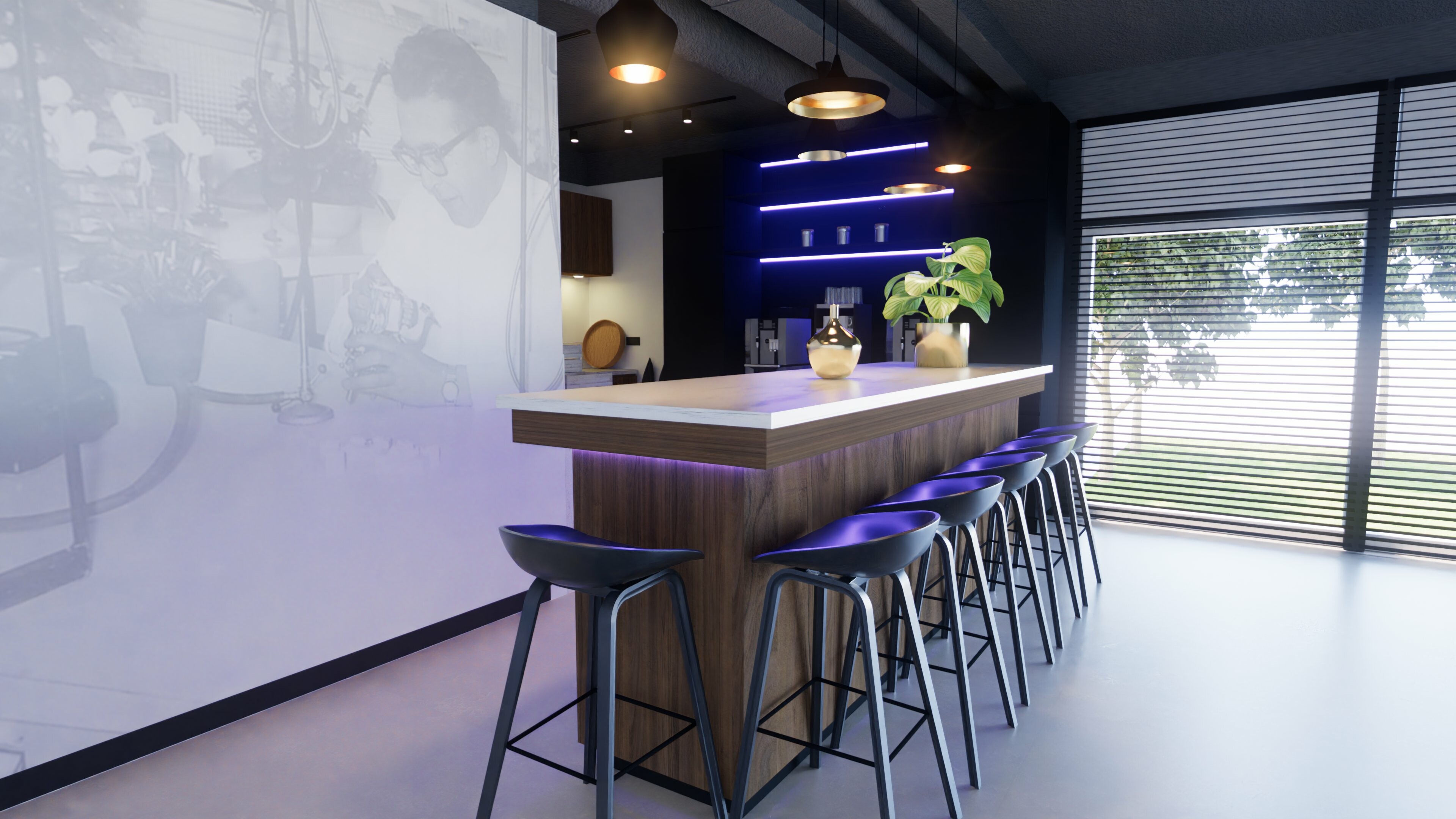 Nabla only supports CUDA interop using the Driver API not the Runtime API. We use NVRTC to produce runtime compiled PTX.

Because CUDA needs its own version the GeForce (Quadro or Tesla) Driver, its often a few minor versions behind your automatically updated Windows driver, the install will fail even if it prompts you to agree to installing an older driver.

So basically first remove your driver, then install CUDA SDK.

On Windows CMake has trouble finding new packages installed after CMake, so its the perfect time to visit its website and check for a new version installer after installing CUDA SDK.

You can also thank NVidia for making the CUDA SDK a whole whopping 2.5 GB on Windows.

Before configuring CMake you must add 2 cache variables:

ANDROID_PLATFORM is a target API platform that you pass as android-x where x is your android API level (you can pass 28 for instance). ANDROID_ABI is Application Binary Interface and note, that we support only x86_64 currently. Those 2 cache variables must be specified before CMake configuration. Having done it you can specify toolchain file for cross-compiling by passing path to android.toolchain.cmake. You can find it in Android Studio's SDK directory in ndk/<version>/build/cmake/android.toolchain.cmake. Basically the entire path should look like this one C:/Users/<your_user>/AppData/Local/AndroidSdk/ndk/<version>/build/cmake/android.toolchain.cmake. With all of this feel free to generate.

Note: each example provided by the engine builds as an executable with non-cross builds and with target of a name called a_target, in following example above it would be android_sample. When building cross-compile for android **to produce the APK file you need to add _apk postfix to the a_target, because a_target gets built then as a library.

In order for the chromebook to work with the apk you build you need to install the right SDK version. Go to Tools -> SDK Manager -> System Settings -> Android SDK then select the SDK Platforms tab and tick the "Show Packake Details" checkbox in the bottom-right corner. After that select Android 9.0 (Pie) -> Android SDK Platform 28 and hit "OK".

To upload generated .apk into your ChromeBook you need first to make sure your device is in developer mode state. If it is, you can open Android Studio and choose Debug or Profile choosing .apk file. Then you will need to connect to your device using adb connector. To make use of adb, you need to find path to the executable that is placed in C:/Users/<your_user>/AppData/Local/AndroidSdk/platform-tools directory. When found, you can type in Android Studio command line C:/Users/<your_user>/AppData/Local/AndroidSdk/platform-tools/adb connect <IP of ChromeBook network>. You can find ChromeBook's IP by entering network settings and choosing current network ChromeBook is connected to. This way the ChromeBook should be listed in available devices and you should be able to upload .apk to the machine through debugging app shortcut. Take into account that you won't probably be able to debug in that scenario, but you will be able to upload .apk to the device.

To debug the .apk on your chromebook you need to open the source file you want to debug in Android Studio (Either via File->Open or Drag&Drop, but be aware that d&d can deadlock your Android Studio 25% of the time so youll need to restart it), then place your breakpoints and hit "Debug" (The bug icon) in the top right corner.

Nabla uses or will use the following Boost libraries:

The maybe's depend on how xplatform and easy to operate the boost::context is, esp w.r.t. Linux, Windows and Android. We will not use boost::fibers as we need our own complex scheduler.

NOTICE: Due to GitHub SSH policy, our CI needed all submodules to be added with SSH URLs. THIS MEANS YOU NEED TO CHECKOUT THE SUPERPROJECT VIA SSH!

Begin with cloning Nabla with:

If you haven't cloned recursively, you have to also perform:

CMake config script will try to initialize submodules for you however as well, but it doesn't mean the initialization attempt will be successful (it often is not when performed on a shaky internet connection, and you end up with dirty, locked or unversioned submodules).

If you haven't initialized the submodules yourself before the CMake configure step, and out CMake submodule update script destroyed them (badly/half initialized), you can run the following set of commands, but beware - it will completely wipe any changes to submodules.

But if you're working on making changes to one of our customized dependencies, you want to disable that, to not have the submodule reset on every CMake reconfigure (which may happen during a build).

Sometimes it may appear that there won't be any files in submodules directories. If so, you have to bring them back by using:

on each submodule's directory required!

Make sure you have installed the latest version of Visual Studio and CMake. Within older versions sometimes there may occur that Visual Studio outputs an error associated with compiler heap space. If you don't get any error, just skip the point. It's because having x64 project opened the solution still uses 32 bit compiler exe and cannot allocate more than 4G of memory, therefore Nabla is unbuildable. Furthermore Visual Studio doesn't provide any option to change that. Because of that you have to manually modify .vcxproj xml and add x64 to PropertyGroup nodes. Pay attention that CMake generates a standard PropertyGroup node, but it isn't enough, because you need to put it into the target where building type is directly specified. It should look for instance as following:

Current example above shows Release mode, but you should consider Debug as well. Having it done, 64bit cl.exe binary usage will be assured. When u get this problem, don't bother with editing all the .vcxprojs. It will probably only matter while building the engine, so the only thing you have to do is edit that .vcxproj you actually use - Nabla.vcxproj for instance and that's it.

If you know a way to make CMake generating .vcxprojs already having those changes that will solve the issue, it will be great if you let us know about it :)

Run cmake-gui and, as usually, give CMake root Nabla directory and where you want CMake to put project files and click "Configure" field. When CMake asks you to choose compiler/IDE, make sure to check whether there's a distinct option for 64bit mode and, if this is the case, choose this one.

For single-config IDEs (Code::Blocks) you'll have to manually set CMAKE_BUILD_TYPE to Debug or Release. Release is default.

You also have options BUILD_EXAMPLES and BUILD_TOOLS which do exactly what they say. By "tools" you should currently understand just convert2baw.

For Windows MSVC required, MinGW build system maintenance will be delegated to the community.

Same as Windows, except that currently we have no way of setting the correct working directory for executing the examples from within the IDE (for debugging). If you care about this please submit an issue/PR/MR to CMake's gitlab.

We recommend the Codelite IDE as that has a CMake-gui generator and has been tested and works relatively nice.

Visual Studio Code suffers from a number of issues such as configuring the CMake every time you want to build a target and slow build times. Here are the issues:

Clang toolset is unmaintained and untested on Linux.

Remember you have to set up starting target project in Visual Studio before you begin to launch your example. To do that click on Solution Explorer, find the example name, hover on it and click on Set as StartUp Project. You can disable building examples by NBL_BUILD_EXAMPLES option in CMake.

Use Nabla in your project!

To get Nabla to be used by an external application without adding it as a subdirectory,but still using a submodule, you should perform following:

If you want to use git (without a submodule) then you can use ExternalProject_Add with the GIT_ properties instead.

I recommend you use ExternalProject_Add instead of add_subdirectory for Nabla as we haven't tested its use by 3rdparty applications that use CMake to build themselves yet.

Due to our no-pollution opengl state isolation policy, we have 1 queue or swapchain = 1 thread = 1 gl context + 1 master context and thread for device calls.

Renderdoc therefore serializes all calls, and presents them inside the capture in interleaved order (records them on a single timeline "as they happened").

Furthermore it has no idea what constitutes a frame, because swap-buffers call happens on a separate thread than all the other API calls. So use the IGPUQueue start/end capture methods!

In certain cases same calls to Vulkan and OpenGL might result in y-flipped image relevant to the other API.

This inconsistency comes from swapchain presentation. When presenting the swapchain, the image location (0,0) corresponds to bottom-left in OpenGL and top-left in Vulkan.

We solve this inconsistency by using surface transforms; This transforms are relative to presentation engine’s natural orientation. and we report HORIZONTAL_MIRROR_180 support in our OpenGL backend and defer handling these rotations (relative to natural orientaion) to the user.

Note that it is common to apply surface transformation to projection matrices to account for this fact. See getSurfaceTransformationMatrix and Android Developers Guide to Pre-rotation

Nabla is released under the Apache 2.0 license. See LICENSE.md for more details.

Permament members of Devsh Graphics Programming Sp. z O.O. use this to organise publicly visible work. Join to the server to get into more details.

The authors of Nabla are:

Past Authors and Contributors:

Words of appreciation for developers whose software has been used in Nabla, currently and in the past: