DABEST is a package for Data Analysis using Bootstrap-Coupled ESTimation.

Estimation statistics is a simple framework that avoids the pitfalls of significance testing. It uses familiar statistical concepts: means, mean differences, and error bars. More importantly, it focuses on the effect size of one's experiment/intervention, as opposed to a false dichotomy engendered by P values. This package is tested on Python 3.6, 3.7, and 3.8. It is highly recommended to download the Anaconda distribution of Python in order to obtain the dependencies easily.

You can install this package via pip.

To install, at the command line run

You can also clone this repo locally.

Then, navigate to the cloned repo in the command line and run 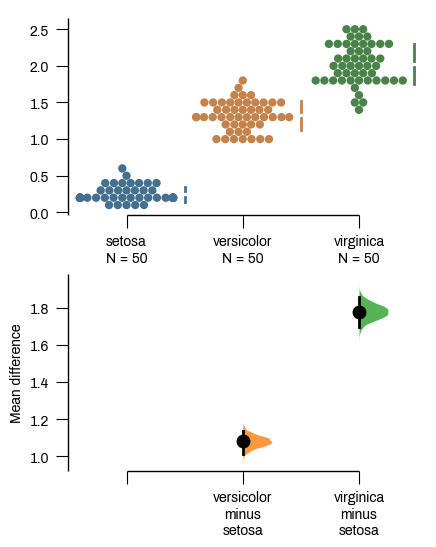 Please report any bugs on the Github issue tracker.

All contributions are welcome; please read the Guidelines for contributing first.

We also have a Code of Conduct to foster an inclusive and productive space.

Currently, DABEST offers functions to handle data traditionally analyzed with Students paired and unpaired t-tests. It also offers plots for multiplexed versions of these, and the estimation counterpart to a 1-way analysis of variance (ANOVA), the shared-control design. While these five functions execute a large fraction of common biomedical data analyses, there remain three others: 2-way data, time-series group data, and proportional data. We aim to add these new functions to both the R and Python libraries.

In many experiments, four groups are investigate to isolate an interaction, for example: a genotype drug effect. Here, wild-type and mutant animals are each subjected to drug or sham treatments; the data are traditionally analysed with a 22 ANOVA. We have received requests by email, Twitter, and GitHub to implement an estimation counterpart to the 2-way ANOVA. To do this, we will implement plots, in which the difference of means () of two groups is subtracted from a second two-group .

Currently, DABEST can analyse multiple paired data in a single plot, and multiple groups with a common, shared control. However, a common design in biomedical science is to follow the same group of subjects over multiple, successive time points. An estimation plot for this would combine elements of the two other designs, and could be used in place of a repeated-measures ANOVA.

We have observed that proportional data are often analyzed in neuroscience and other areas of biomedical research. However, compared to other data types, the charts are frequently impoverished: often, they omit error bars, sample sizes, and even P valueslet alone effect sizes. We would like DABEST to feature proportion charts, with error bars and a curve for the distribution of the proportional differences.

We encourage contributions for the above features.

We would like to thank alpha testers from the Claridge-Chang lab: Sangyu Xu, Xianyuan Zhang, Farhan Mohammad, Jurga Mituzait, and Stanislav Ott.

To test DABEST, you will need to install pytest.

Run pytest in the root directory of the source distribution. This runs the test suite in the folder dabest/tests. The test suite will ensure that the bootstrapping functions and the plotting functions perform as expected.