Although several open-source research hypervisors aimed at simplicity already exist, in my opinion this field is still somewhat unexplored and needs more open-source projects. This can especially help those who have just started exploring virtualization technologies and are looking for small/reference projects. If you're one of them, my bets are that you're really disappointed right now, because all you've got are barely dozen of (great!) projects and huge pile of Intel Manual pages.

C++ has been chosen as a language for this project because of two reasons:

Even though this project is primarily developed for Windows, I've decided to not use traditional Windows Driver naming convention (aka DrvCamelCase). Instead, traditional C++ snake_case is used. The reason is that hypervisor is very "stand-alone" and doesn't depend on many OS functions. Therefore I decided to treat it as a regular C++ project.

If you want to challenge yourself in low-level programming, my advice would be to try and write a simple hypervisor. During the process you'll get invaluable knowledge and experience and you'll probably discover many new things. For instance here's a selection of some things I've learned thanks to writing this project:

Also - as obvious as it might sound - I'd like to point out that if you decide to write your own VT-x hypervisor, you'll NEED Intel® 64 and IA-32 architectures software developer’s manual combined volumes: 1, 2A, 2B, 2C, 2D, 3A, 3B, 3C, 3D, and 4. So download the PDF - together with Adobe Acrobat Reader - because trust me, you don't want to read and navigate through 5000 pages with browser's built-in PDF reader.

Note: hvpp is compiled as a static library, which is linked with the hvppdrv project.

You can run hvpp on Windows 7 or higher. Windows 10 is recommended though, because it supports TraceLogging.

Register driver with Service Control Manager (yes, it's important to leave these spaces):

Now you should restart your computer for testsigning to take effect, otherwise you'll be unable to start the driver. But before you do, you might want to prepare DebugView from SysInternals and traceview.exe tool from the WDK (note that traceview will work properly only on Windows 10).

hvpp now performs various checks and enters VMX mode if they pass. In case of success you should see message hvpp started in the DebugView. 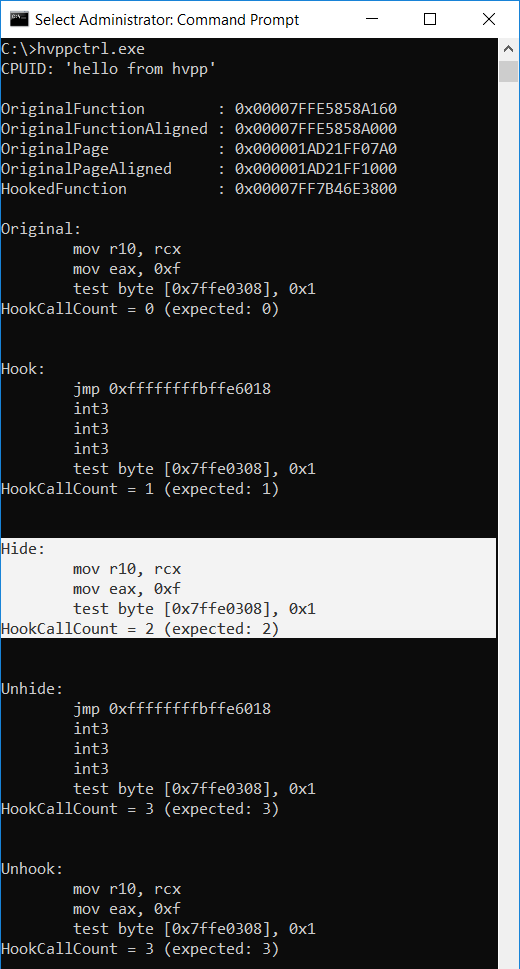 At the same time you should see tracelog messages in the TraceView - they are generated on each VMCALL and on each EPT Violation.

When you decide you want to turn off the hvpp, just execute:

This software is open-source under the MIT license. See the LICENSE.txt file in this repository.

Detours is licensed under MIT license (a copy of the license is included here).

udis86 is licensed under the terms of the 2-clause "Simplified BSD License" (a copy of the license is included here).

If you find this project interesting, you can buy me a coffee