Not maintained anymore! Will be archived soon.

This tool will look for interesting lines in the code which can contain:

This tool was created with a big focus on usability and graphical guidance in the user interface.

For the impatient ones, grab the download on the releases page.

&ast;: note that currently only apk files are supported, but ipa files will follow very shortly.

An example report can be found here.

The concept is that you drag and drop your mobile application file (an .apk or .ipa file) on the StaCoAn application and it will generate a visual and portable report for you. You can tweak the settings and wordlists to get a customized experience.

The reports contain a handy tree viewer so you can easily browse trough your decompiled application. 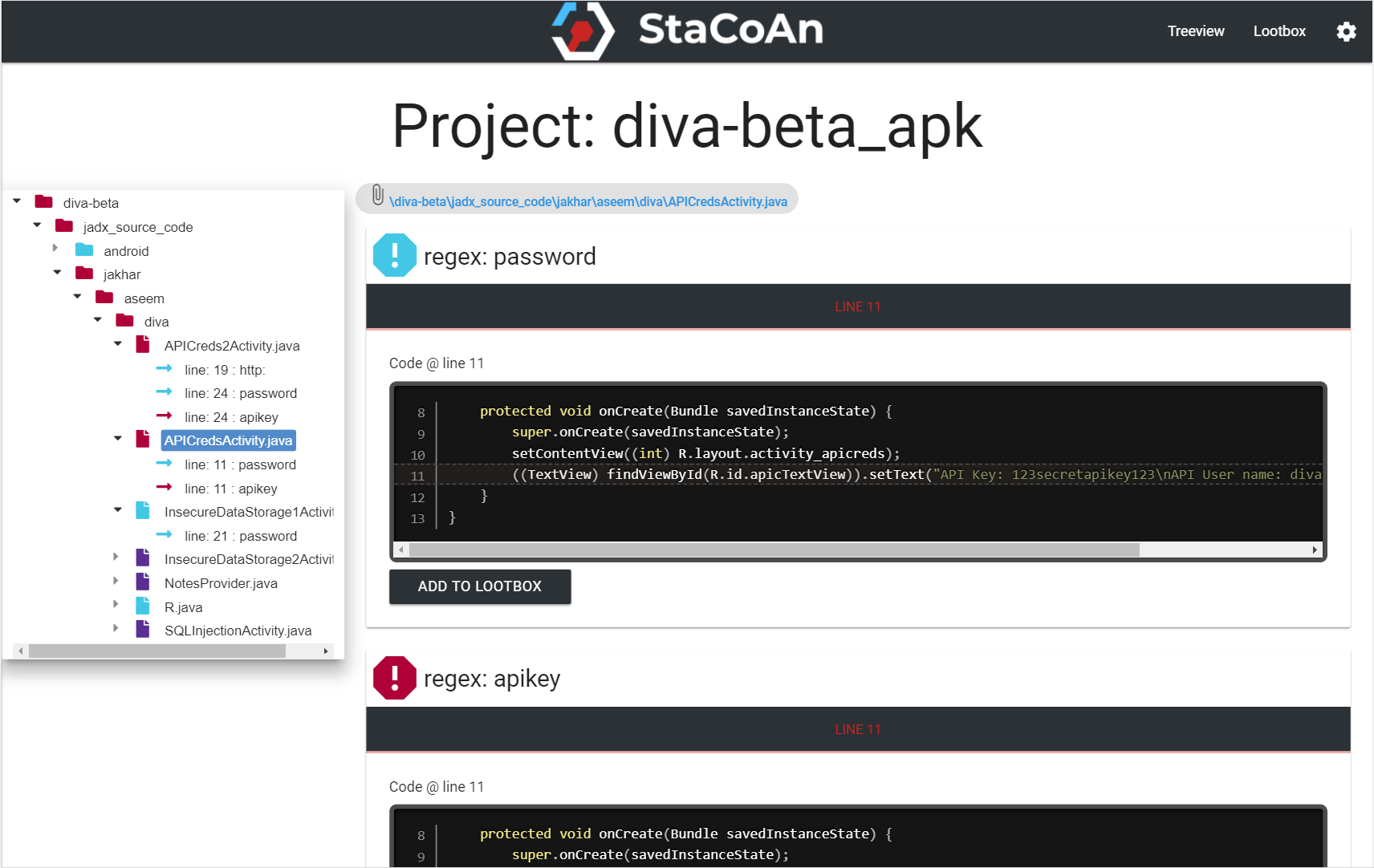 The Loot Function let you 'loot' (~bookmark) the findings which are of value for you and on the loot-page you will get an overview of your 'loot' raid.

The final report can be exported to a zip file and shared with other people.

The application uses wordlists for finding interesting lines in the code. Wordlists are in the following format:

In the exclusion_list.txt you can define exclusions (if you have for some reason to much findings):

Database-files are also searched for keywords. The database also has a table viewer. 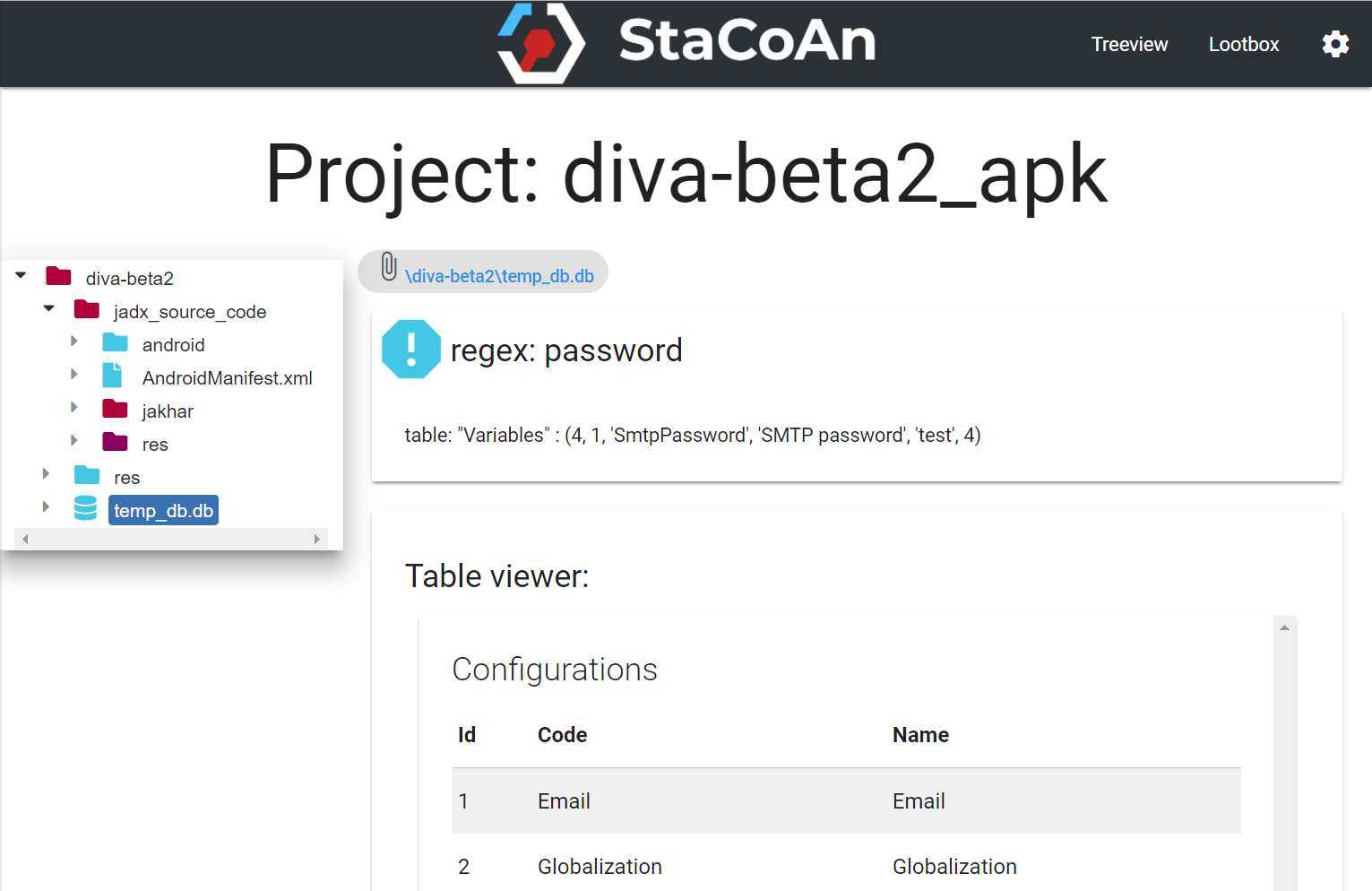 The reports are made to fit on all screens.

How does the tool works?

This tool will have trouble with obfuscated code. If you are a developer try to compile without obfuscation turned on before running this tool. If you are on the offensive side, good luck bro.

If you want to get started as soon as possible, head over to the releases page and download the executable or archive which corresponds to your operating system.

If you have downloaded the release zip file, extract this.

On Windows you can just double click the executable. It will open in server mode and you can just drag and drop your mobile applications in the webinterface.

On Mac and Linux you can just run it from the terminal without arguments for the server-mode.

Drag and drop this file onto the executable.

Or you can specify an apk-file to run it without the server-mode:

The report will be put inside a folder with a name corresponding to the apk.

Make sure that your application is at the location /yourappsfolder.

Make sure that you have pip3 installed:

Or if you rather use the drag and drop interface:

Make sure that you are in the src folder.

This entire program's value is depending on the wordlists it is using. In the end, the final result is what matters. It is easy to build a wordlist (in comparison to writing actual code), but it has the biggest impact on the end result. You can help the community the most with making wordlists.

If you want an easy way to post your idea's, head over to: http://www.tricider.com/brainstorming/2pdrT7ONVrB. From there you can add ideas for entries in the wordlist.

Improving the code is also much appreciated.

If the contribution is high enough, you will be mentioned in the authors section.

The following projects were used in this project:

All of these projects have their corresponding licenses. Please respect these while you are modifying and redistributing this project.

&ast;: the binary is included in this project. If the dev's from JADX are not comfortable with this, feel free to contact me about this so we can find a solution.

Many more should be listed here, but I can't list them all.