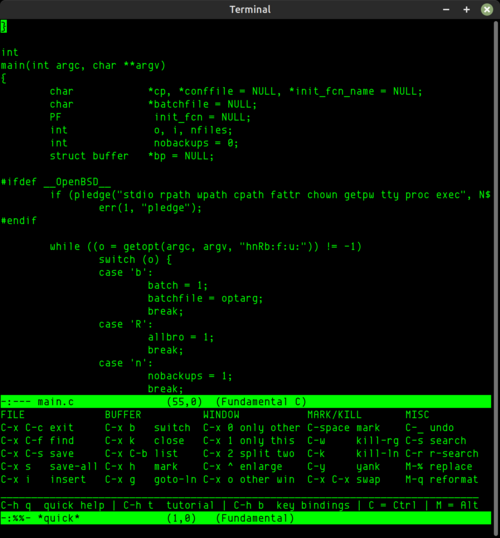 Mg is a Micro Emacs clone created in 1987, based on the original MicroEMACS v30 released by Dave Conroy in 1985. The name, "Micro GNU Emacs", was disputed early on by the FSF, so today it simply goes by mg. This software is fully free and in the public domain.

The intention is to be a small, fast, and portable Emacs-like editor for users who cannot, or do not want to, run the real Emacs for one reason or another. Compatibility with GNU Emacs is key for Mg, separating it from other ErsatzEmacs clones, because there should never be any reason to learn more than one Emacs flavor.

Try the latest release, use the tarball with a version in the name, avoid GitHub generated links! Releases come with a configure script, so you don't need autotools. Only a C compiler, make and you're set to go.

When Emacs was born keyboards had a Meta key. Accessing functions with Meta combinations today is usually the same as holding down the Alt key, or tapping Esc once.

Other editors use short forms like Ctrl-V or ^V, in Emacs this is written C-v. Some usage examples:

To access the built-in Quick Help, press C-h q, meaning: hold down Ctrl and tap h, then release Ctrl and tap q. The - has a meaning, as you can see.

This project is completely self hosting. However, by default you need a termcap library, like Ncurses, to provide APIs like: setupterm(), tgoto(), and tputs().

See below for how to build without Ncurses.

On recent Debian/Ubuntu based systems libtinfo-dev can be used, on older ones the include file term.h is missing, so libncurses-dev must be used instead:

On other systems you have to install the full Ncurses library instead, on RHEL, CentOS, and Fedora:

On macOS you need the Xcode command line tools and headers:

Then build Mg from the unpacked release tarball:

Users who checked out the source from GitHub must run ./autogen.sh first to create the configure script. This requires GNU autotools to be installed on the build system.

There are several options to the configure script to disable features, e.g., to reduce the size, or remove features if you want to be on par with the official Mg. By default, all below features are enabled:

To build the smallest possible mg, with many features removed:

To build a completely static mg with all features:

Alpine Linux based Docker container images are available from GitHub:

To edit files from your host's $HOME, map it to the container's /root and run:

This supports reading your ~/.mg and it even takes arguments on the command line. Both quick help and the tutorial are bundled.

The history is long and intertwined with other MicroEMACS spin-offs but goes something like this:

See the source distribution for the list of AUTHORS.

This project is derived from OpenBSD Mg, which is the best (maintained) source of the original Micro Emacs based on mg2a. The intention of this project is to develop new usability features, track as many other Mg clones as possible, and, unlike the upstream OpenBSD version, enable hidden features using a standard GNU configure script, while remaining friendly to porting to resource constrained systems. New features:

Note: the official portable Mg project, used by Debian and other GNU/Linux distributions, is maintained by Han Boetes. Unlike this project, which is stand-alone, Boetes relies on libbsd to maintain portability.

Please report any bugs and problems with the packaging and porting to the GitHub issue tracker https://github.com/troglobit/mg/issues