Tessera is a front-end interface for the Graphite metrics system, which provides a large selection of presentations, layout, and interactivity options for building dashboards.

The biggest key differences between Tessera and other frontends are the separation of queries from presentations, and the ability to apply arbitrary transformations to the presentations & queries, allowing for a large degree of interactivity. Tessera is initially focused on information presentation - it does not NOT address the areas of metric discovery or query composition (although it may in the future).

Tessera consists of a small python webserver written with Flask with a SQL backing store. The server manages storing and searching for dashboards, managing tags for organization, serving the basic UI assets, and providing a ReST API for the front-end to use.

Dashboards are big lumps of JSON data describing the queries, presentations, and layout, wrapped in a small shell of SQL metadata. Most of the heavy lifting is done by the javascript front-end, which is responsible for all rendering, data fetching from graphite, and editing of dashboards.

Tessera can be installed easily from PyPi with pip or easy_install. This method of installation is only recommended for casual use.

After installation, create a config.py script for your local settings.

Then launch the service:

The service will be available on localhost:5000 by default, with the demo dashoards loaded.

Documentation is hosted on GitHub Pages at tessera-metrics.github.io/tessera/docs.

Some additional writeup of why Tessera exists can found on the introductory blog post that was originally posted on Urban Airship's company blog - Introducing Tessera, a Graphite Frontend. 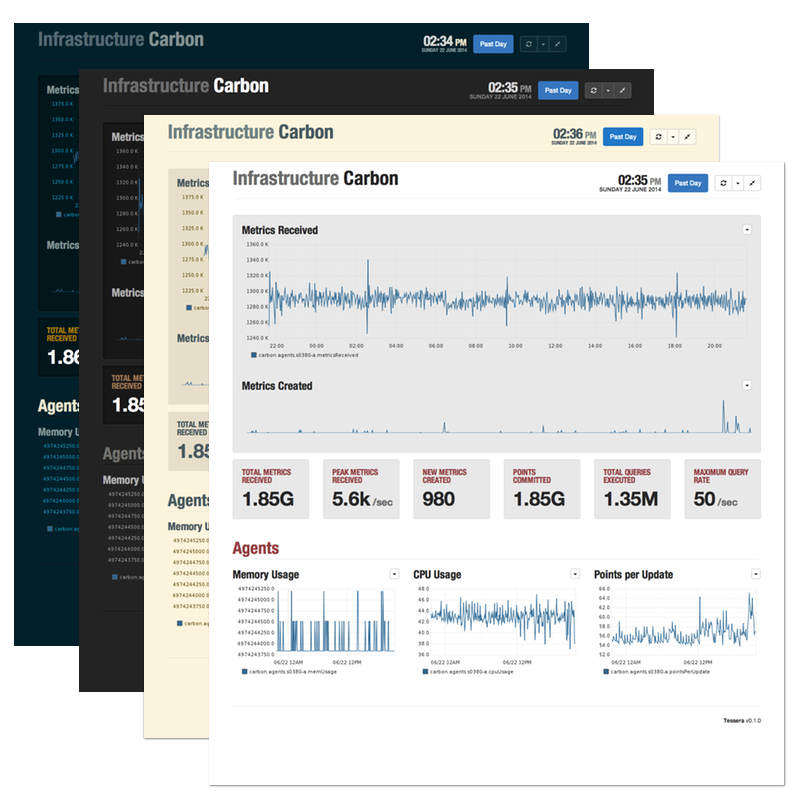 Third-party software libraries included with this project are distributed under their respective licenses.