SimpleSvmHook is a research purpose hypervisor for Windows on AMD processors. It hooks kernel mode functions and protects them from being detected using Nested Page Tables (NPT), part of AMD Virtualization (AMD-V) technology.

This project is meant to serve as an example implementation of virtual machine introspection (VMI) on AMD processors and highlight differences from similar VMI implementations on Intel processors.

If you already know about DdiMon, this is an AMD counterpart of it from the functionality perspective except few things described below.

A stealth hook is a type of hook that is not visible from the outside of the monitor or inspector component. In the context of VMI, stealth hook is installed and managed by a hypervisor into guest code to redirect execution of specified addresses while being not easily detectable by the guest.

One of common ways to implement stealth hook within a hypervisor is to split “view” of memory for read/write and execute access from the guest using Second Level Address Translation (SLAT), namely, Extended Page Table (EPT) on Intel and Nested Page Tables (NPT) for AMD processors.

SLAT can also configure permission of the GPA against the guest; for instance, GPA:0x2000 can be configured as readable/writable but not executable. When the guest attempts to access a GPA in a way not permitted by SLAT, the processor triggers VM-exit so that a hypervisor can take necessary actions, such as updating the permission or inject #GP into the guest.

Stealth hook is often implemented by leveraging those capabilities. Take DdiMon as an example, when the hypervisor installs stealth hook, it creates a copy of the target page, sets 0xCC into the address to hook, then sets up EPT to make the page execute-only (0xb000 in the below example).

When the guest attempts to execute the address, the hypervisor:

and when the guest attempts to read from or write to the address, the hypervisor:

Those operations allow the hypervisor to redirect execution of the guest while keeping the hook invisible from the guest. Also, notice that EPT configurations are reverted to the original state, and the next execute or read/write access can be handled in the same way.

However, this cannot be implemented directly on AMD processors.

Implementation on AMD Processors and Limitations

The previously described technique cannot be implemented on AMD processors due to lack the execute-only permission.

NPT, the AMD implementation of SLAT, does not permit a hypervisor to configure the permission as execute-only because there is no bit to indicate whether the page is readable. To make the page executable, it must also be readable at the same time. This limitation requires significant changes in a way to hide hooks.

Firstly, a hypervisor needs to set the unmodified readable/writable page as the default association of the target page (0xb000 in the below example).

This introduces additional performance cost due to more frequent VM-exit (recall that the address being hooked is code and much more likely accessed for execution).

Secondly, the hook has to remain visible in some situation. Let us see why.

When the guest attempts to execute the address, the hypervisor:

Notice that while hook was executed, the hooked page remains readable with 0xCC.

This is a critical issue yet resolution is challenging because:

This way, the hook remains invisible while the guest is executing any code outside of the hooked page. In other words, the guest can still see the hook while it is executing the same page as the hooked page. This may be a significant limitation if hook must be installed on code that may perform a self-integrity check, but it is unlikely a real issue if hook is installed against known kernel code such as NTOSKRNL and Win32k.

The other downside of this design is overhead of NTP manipulation. VM-exit, when the guest jumps into and out from the hooked page, has non-negligible performance penalty because the hypervisor must update multiple NPT entries to change the executable permission of all pages.

Delay in Windows boot time measured by Windows Performance Analyzer with the current implementation was 20% on HP EliteBook 725 G4 (AMD A12 PRO-8830B), while it was only 9% with DdiMon on Dell Latitude E6410 (Intel Core i7-620M). Given that the tested AMD processor is almost the 7 years newer model than the tested Intel processor and expected to have much more optimized implementation of AMD-V than that of VT-x on the old Intel processor, this high number (20%) is likely because of the heavyweight VM-exit handling.

While this overhead did not appear to be noticeable on normal load, it could be the real issue depending on load, and possibly, the number of hooks installed.

This project demonstrated that implementation of stealth hook on AMD processors was possible with the caveat that hook had to remain visible from code in the same page and that performance overhead introduced by the explained design was considerably higher than that of similar implementation on Intel processors.

Those limitation can be ignored in some use cases such as instrumentation of known kernel API for research, but could prevent researchers from developing highly-stealth VMI tools and tools for performance sensitive environments.

To build SimpleSvmHook from source code, clone full source code from GitHub with the below command and compile it on a supported version of Visual Studio.

You have to enable test signing to install the driver before installing it. To do that, open the command prompt with the administrator privilege and run the following command, and then restart the system to activate the change:

To install and uninstall the SimpleSvmHook driver, use the sc command. For installation and start:

All debug output are saved in C:\Windows\SimpleSvmHook.log.

This screenshot shows example output from installed hooks as well as that those hooks are not visible from the system (the local kernel debugger). 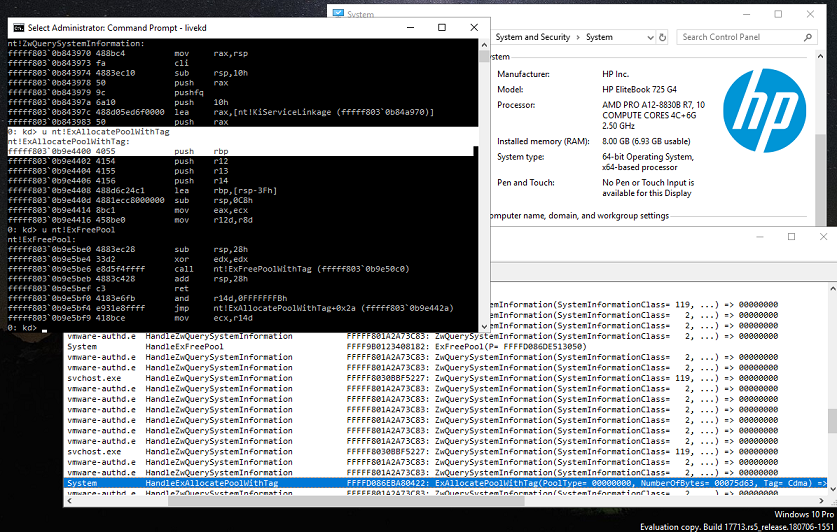 Note that emulation of NTP in VMware is significantly slow. To try out SimpleSvmHook on VMware, set SIMPLESVMHOOK_SINGLE_HOOK to 1 and recompile the driver.