This idea was inspired by the way flags were generated in the Korean domestic CTF contest called Cyber Conflict Exercise.

In many recent CTF competitions, docker has been used for effective competition management such as container isolation and log tracing.

All Docker containers use the host kernel, which eventually means that inserting kernel modules could affect the docker instance. Wikipedia says that

Docker uses resource isolation features of the Linux kernel such as cgroups and kernel namespaces to allow independent "containers" to run within a single Linux instance, avoiding the overhead of starting virtual machines.

This also means that hooking a syscall from the host kernel will eventually affect the container too.

With this in mind, I developed a simple Linux kernel module called flagchecker that generates a random flag and records it somewhere within the host instance to keep the record of user's flag submissions. 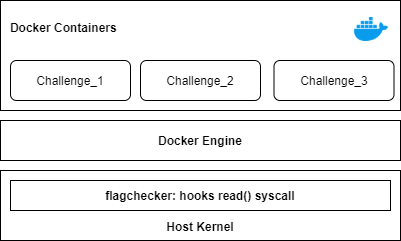 What flagchecker does is as follows: 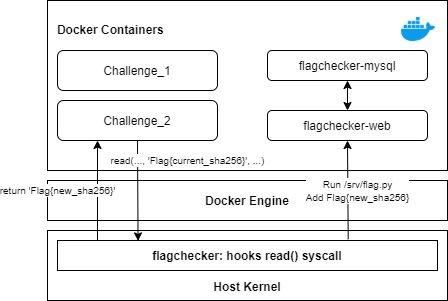 This project was tested on a small CTF named BingoCTF sponsored by Power of Commmunity (POC).

During the test, I created an additional server within the instance to gather the flag and and communicate with the scoreboard server.

Having the flagchecker on the same machine made it easier for the scoreboard server to integrate and for organizers to check cheating attempts.

Please refer to the each directory for more information.

What was the result of the test?

We failed to catch direct flag trades but we managed to catch people who broke the rules.

I've played some challenges but my flag wasn't changing at that time. What happened to those challenges?

We had a lenient code to cover parts that didn't really require LKM. Check out the following code.

I've added the code to generate the flag but didn't disclose this part while handing out the dist file.

You said your idea was inspired from the other CTF i.e. CCE. Are you sure they implemented such codes?

It's just an assumption. I have not directly asked organizers how they implemented such behaviors, but I tried to make something similar because it seemed pretty interesting.