At the core of quadsort is the quad swap. Traditionally most sorting algorithms have been designed using the binary swap where two variables are sorted using a third temporary variable. This typically looks as following.

This process is visualized in the diagram above.

After the first round of sorting a single if check determines if the four swap variables are sorted in-order, if that's the case the swap finishes up immediately. Next it checks if the swap variables are sorted in reverse-order, if that's the case the sort finishes up immediately. If both checks fail the final arrangement is known and two checks remain to determine the final order.

This eliminates 1 wasteful comparison for in-order sequences while creating 1 additional comparison for random sequences. However, in the real world we are rarely comparing truly random data, so in any instance where data is more likely to be orderly than disorderly this shift in probability will give an advantage.

There is also an overall performance increase due to the elimination of wasteful swapping. In C the basic quad swap looks as following:

In the case the array cannot be perfectly divided by 4, the tail, existing of 1-3 elements, is sorted using the traditional swap.

There are however several problems with the simple quad swap above. If an array is already fully sorted it writes a lot of data back and forth from swap unnecessarily. If an array is fully in reverse order it will change 8 7 6 5 4 3 2 1 to 5 6 7 8 1 2 3 4 which reduces the degree of orderliness rather than increasing it.

To solve these problems the quad swap needs to be implemented in-place.

The chain swap is easiest explained with an example. Traditionally many sorts would sort three random values by executing three binary swaps.

While placing the swap operation swap = a;a = b;b = swap; on one line might be confusing, it does illustrate the symmetric nature of the assignment better than placing it on three lines.

Swapping like this, while convenient, is obviously not the most efficient route to take. So an in-place quadswap implements the sorting of three values as following.

While swapping like this takes up a lot more real estate the advantages should be pretty clear. By doing a triple swap you always perform 3 comparisons and up to 3 swaps. By conjoining the three operations you perform only 2 comparisons in the best case and the swaps are chained together turning a worst case of 9 assignments into a worst case of 4.

If the array is already in-order no assignments take place.

As mentioned previously, reverse order data has a high degree of orderliness and subsequently it can be sorted efficiently. In fact, if a quad swap were to turn 9 8 7 6 5 4 3 2 1 into 6 7 8 9 2 3 4 5 1 it would be taking a step backward instead of forward. Reverse order data is typically handled using a simple reversal function, as following.

Run detection, as the name implies, comes with a detection cost. Thanks to the laws of probability a quad swap can cheat however. The chance of 4 random numbers having the order 4 3 2 1 is 1 in 24. So when sorting random blocks of 4 elements, by expanding the sorting network, a quad swap only has to check if it's dealing with a reverse-order run when it encounters a reverse order sequence (like 4 3 2 1), which for random data occurs in 4.16% of cases.

But doing in-order run checks in the quad swap routine is not efficient because that would mean we need to start remembering run lengths and perform other kinds of algorithmic gymnastics. Instead we keep it simple and check in-order runs at a later stage.

One last optimization is to write the quad swap in such a way that we can perform a simple check to see if the entire array was in reverse order, if so, the sort is finished. If not, we know the array has been turned into a series of ordered blocks of 4 elements.

In the first stage of quadsort the quad swap is used to pre-sort the array into sorted 4-element blocks as described above.

The second stage uses an approach similar to the quad swap, but it's sorting blocks of 4, 16, 64, or more elements.

The quad merge can be visualized as following:

In the first row quad swap has been used to create 4 blocks of 4 sorted elements each. In the second row, step 1, block A and B have been merged to swap memory into a single sorted block of 8 elements. In the third row, step 2, block C and D have also been merged to swap memory. In the last row, step 3, the blocks are merged back to main memory and we're left with 1 block of 16 sorted elements. The following is a visualization of an array with 64 random elements getting sorted.

Just like with the quad swap it is beneficial to check whether the 4 blocks are in-order.

In the case of the 4 blocks being in-order the merge operation is skipped, as this would be pointless. This does however require an extra if check, and for randomly sorted data this if check becomes increasingly unlikely to be true as the block size increases. Fortunately the frequency of this if check is quartered each loop, while the potential benefit is quadrupled each loop.

In the case only 2 out of 4 blocks are in-order the comparisons in the merge itself are unnecessary and subsequently omitted. The data still needs to be copied to swap memory.

Another issue with the traditional merge sort is that it performs wasteful boundary checks. This looks as following:

This unguarded merge optimization is most effective in the final tail merge.

Another problem is that a sub-optimal array size results in wasteful swapping. To work around these two problems the quad merge routine is aborted when the block size reaches 1/8th of the array size, and the remainder of the array is sorted using a tail merge.

The main advantage of the tail merge is that it allows reducing the swap space of quadsort to n / 2 and that it has been optimized to merge arrays of different lengths. It also simplifies the quad merge routine which only needs to work on arrays of equal length.

Quadsort makes n comparisons when the data is already sorted or reverse sorted.

The C implementation of quadsort supports long doubles and 8, 16, 32, and 64 bit data types. By using pointers it's possible to sort any other data type.

Because quadsort uses n / 2 swap memory and does not partition its cache utilization is not as ideal as quicksort. Based on my benchmarks it appears that quadsort is faster than in-place sorts for array sizes that do not exhaust the L1 cache, which can be up to 64KB on modern processors.

The upper half shows the swap memory and the bottom half shows the main memory. Colors are used to differentiate between skip, swap, merge, and copy operations.

The following benchmark was on WSL 2 gcc version 7.5.0 (Ubuntu 7.5.0-3ubuntu1~18.04) using the wolfsort benchmark. The source code was compiled using g++ -O3 -w -fpermissive bench.c. Each test was ran 100 times and only the best run is reported. Stablesort is g++'s std:stablesort function. 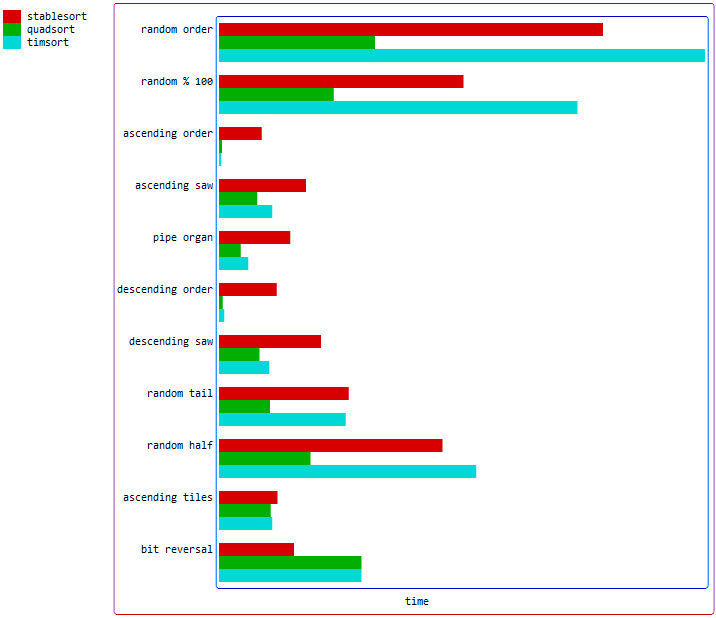 The following benchmark was on WSL 2 gcc version 7.5.0 (Ubuntu 7.5.0-3ubuntu1~18.04) using the wolfsort benchmark. The source code was compiled using g++ -O3 -w -fpermissive bench.c. Each test was ran 100 times and only the best run is reported. It measures the performance on random data with array sizes ranging from 16 to 262144. 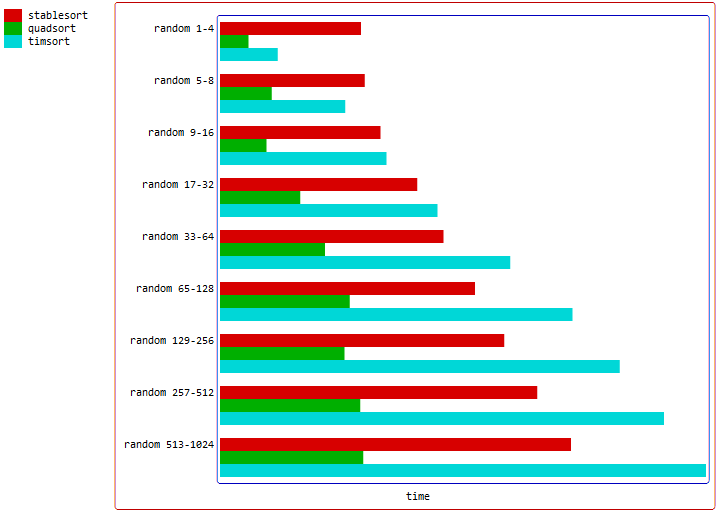 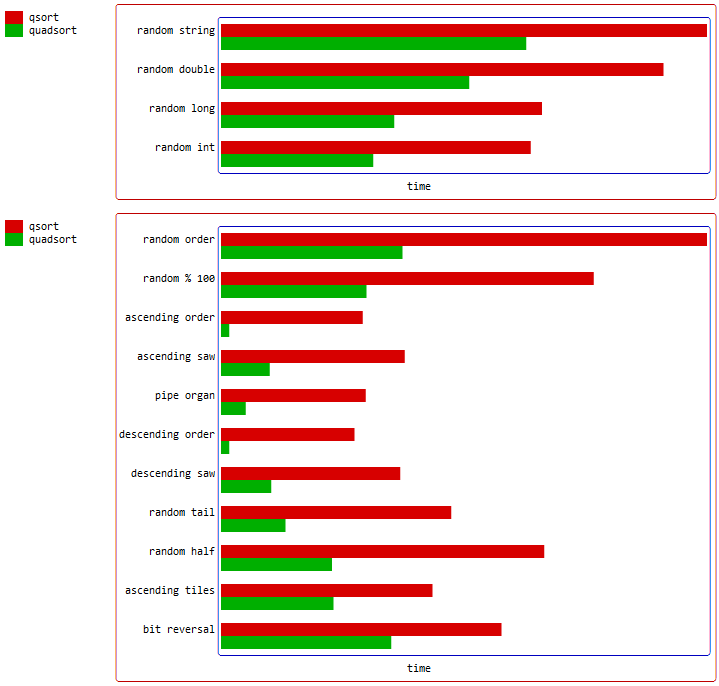 In the benchmark above quadsort is compared against glibc qsort() using the same general purpose interface and without any known unfair advantage, like inlining.

The following benchmark was on CYGWIN_NT-10.0-WOW gcc version 10.2.0. The source code was compiled using gcc -O3 bench.c. Each test was ran 10 times and only the best run is reported. It's generated by running the benchmark using 1000000 10 1 as the argument. 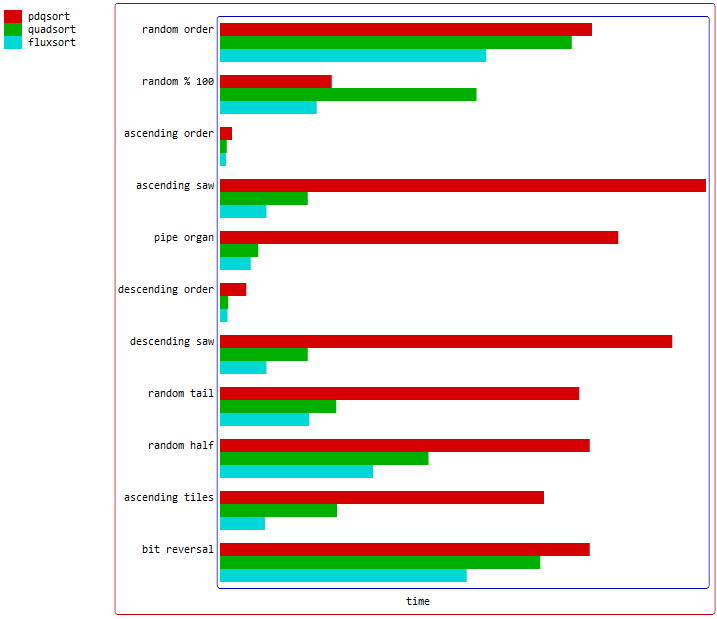 In this benchmark it becomes clear why quicksort is often preferred above a traditional mergesort, it has fewer comparisons for ascending, generic, and descending order data. However, it performs worse than quadsort on all tests except for generic order and ascending tiles. If quadsort was to ignore stability it would beat quicksort on all tests.

The following benchmark was on WSL 2 gcc version 7.5.0 (Ubuntu 7.5.0-3ubuntu1~18.04). The source code was compiled using gcc -O3 bench.c. Each test was ran 10 times and only the best run is reported. It's generated by running the benchmark using 1024 0 0 as the argument. The benchmark is weighted, meaning the number of repetitions halves each time the number of items doubles.