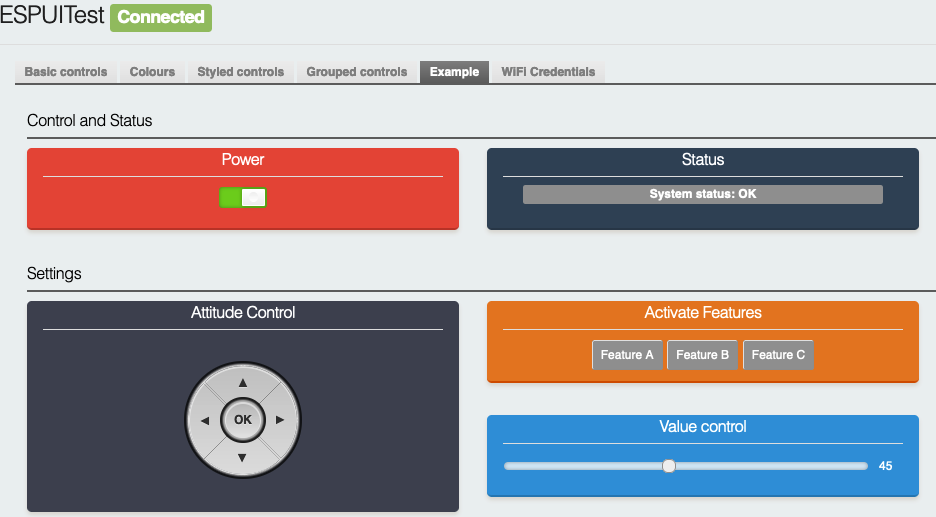 ESPUI is a simple library to make a web user interface for your projects using the ESP8266 or the ESP32 It uses web sockets and lets you create, control, and update elements on your GUI through multiple devices like phones and tablets.

So if you either don't know how or just don't want to waste time: this is your simple solution user interface without the need of internet connectivity or any additional servers.

The Library runs fine on any kind of ESP8266 and ESP32 (NodeMCU Boards, usw)

This library is dependent on the following libraries to function properly.

Make sure all the dependencies are installed, then install like so:

Just include this library as a dependency on lib_deps like so:

For Windows: Download the Repository and extract the .zip in Documents>Arduino>Libraries>{Place "ESPUI" folder Here}

For Linux: Download the Repository and extract the .zip in Sketchbook/Libraries/{Place "ESPUI" folder Here}

For macOs: Download the Repository and extract the .zip in ~/Documents/Arduino/libraries/{Place "ESPUI" folder Here}

ESPUI serves several files to the browser to build up its web interface. This can be achieved in 2 ways: PROGMEM or LITTLEFS

When ESPUI.begin() is called the default is serving files from Memory and ESPUI should work out of the box!

OPTIONAL: But if this causes your program to use too much memory you can burn the files into the LITTLEFS filesystem on the ESP. There are now two ways to do this: you can either use the ESP file upload tool or you use the library function ESPUI.prepareFileSystem()

Just open the example sketch prepareFileSystem and run it on the ESP, (give it up to 30 seconds, you can see the status on the Serial Monitor), The library will create all needed files. Congratulations, you are done, from now on you just need to do this again when there is a library update, or when you want to use another chip :-) Now you can upload your normal sketch, when you do not call the ESPUI.prepareFileSystem() function the compiler will strip out all the unnecessary strings that are already saved in the chip's filesystem and you have more program memory to work with.

The heart of ESPUI is ESPAsyncWebserver. ESPUI's frontend is based on Skeleton CSS and jQuery-like lightweight zepto.js for Handling Click Events Etc. The communication between the ESP and the client browser works using web sockets. ESPUI does not need network access and can be used in standalone access point mode, all resources are loaded directly from the ESPs memory.

This section will explain in detail how the Library is to be used from the Arduino code side. In the arduino setup() routine the interface can be customised by adding UI Elements. This is done by calling the corresponding library methods on the Library object ESPUI. Eg: ESPUI.button("button", &myCallback); creates a button in the interface that calls the myCallback(Control *sender, int value) function when changed. All buttons and items call their callback whenever there is a state change from them. This means the button will call the callback when it is pressed and also again when it is released. To separate different events an integer number with the event name is passed to the callback function that can be handled in a switch(){}case{} statement. Here is an overview of the currently implemented different elements of the UI library:

Buttons have a name and a callback value. They have one event for press (B_DOWN) and one for release (B_UP).

Switches sync their state on all connected devices. This means when you change their value they change visibly on all tablets or computers that currently display the interface. They also have two types of events: one when turning on (S_ACTIVE) and one when turning off (S_INACTIVE).

Button pads come in two flavours: with or without a center button. They are very useful for con-trolling all kinds of movements of vehicles or also of course our walking robots. They use a single callback per pad and have 8 or 10 different event types to differentiate the button actions.

Labels are a nice tool to get information from the robot to the user interface. This can be done to show states, values of sensors and configuration parameters. To send data from the code use ESP.print(labelId, "Text"); . Labels get a name on creation and a initial value. The name is not changeable once the UI initialised.

Labels automatically wrap your text. If you want them to have multiple lines use the normal <br> tag in the string you print to the label.

In fact, because HTML can be used in the label's value, you can make a label display images by including an <img> tag.

This requires that the client has access to the image in question, either from the internet or a local web server.

The Slider can be used to slide through a value from 1 to 100. Slides provide realtime data, are touch compatible and can be used to for example control a Servo. The current value is shown while the slider is dragged in a little bubble over the handle. In the Callback the slider does not return an int but a String. Use the .toInt function to convert the value, see the gui example to check how it works.

A slider usually only sends a new value when it is released to save the esps from being spammed with values. This behaviour can be cahnged globally using a property of the ESPUI object before begin():

The numberinput can be used to directly input numbers to your program. You can enter a Value into it and when you are done with your change it is sent to the ESP.

A number box needs to have a min and a max value. To set it up just use:

Note that HTML number boxes will respect their min and max when the user clicks the up and down arrows, but it is possible on most clients to simply type any number in. As with all user input, numbers should be validated in callback code because all client side checks can be skipped. If any value from the UI might cause a problem, validate it.

The textinput works very similar like the number input but with a string. You can enter a String into it and when you are done with your change it is sent to the ESP.

If you attach a Max control to the text input then a max length will be applied to the control.

However even with a set maximum length, user input should still be validated because it is easy to bypass client-side checks. Never trust user input. 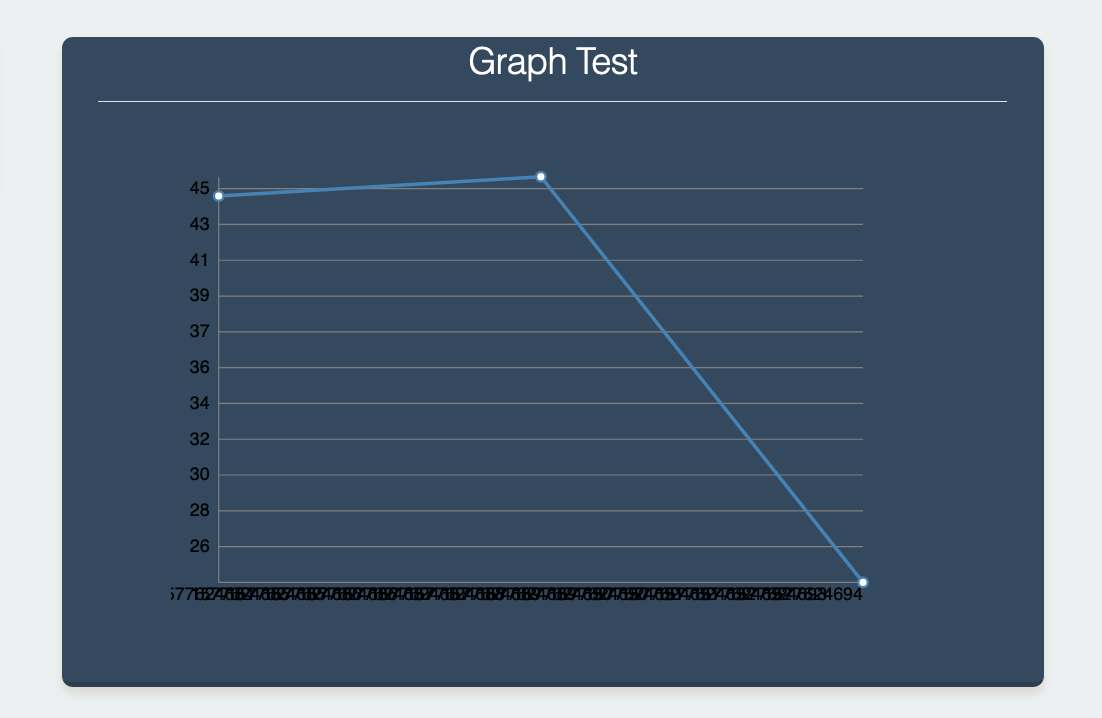 Use ESPUI.addGraphPoint(graphId, random(1, 50)); to add a new value at the current time, use ESPUI.clearGraph(graphId) to clear the entire graph. Graph points are saved in the browser in localstorage to be persistant, clear local storageto remove the points or use clearGraph() from a bbutton callback to provide a clear button.

And then adding Options to it like seperate widgets, specifying the select as the parent:

Check the tabbedGui example for a working demo

Tabs can be used to organize your widgets in pages. Check the tabbedGui example. Tabs can be created using the generic functions like so: ESPUI.addControl( ControlType::Tab, "Settings 1", "Settings 1" ); 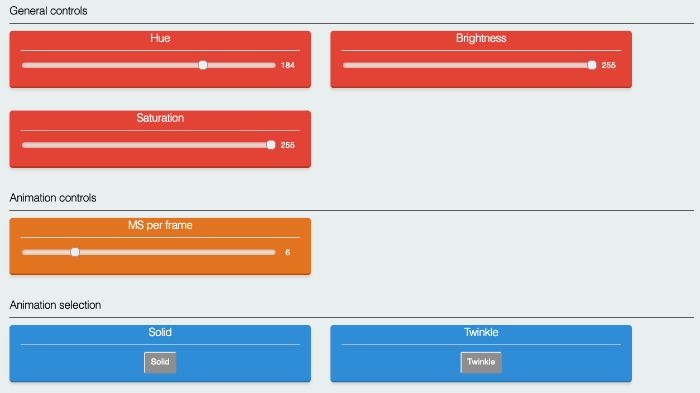 You can use separators to break up the UI and better organise your controls. Adding a separator will force any following controls onto the subsequent line. Add separators as follows:

Initialisation of the UI

After all the elements are configured you can use ESPUI.begin("Some Title"); to start the UI interface. (Or ESPUI.beginLITTLEFS("Some Title"); respectively) Make sure you setup a working network connection or AccesPoint before (See gui.ino example). The web interface can then be used from multiple devices at once and also shows an connection status in the top bar.

There are 2 generic functions to create and update controls, to see them in action check the gui-generic-api example.

Then its value can be updated by doing:

You can also update other parameters of the control like its color using:

ESPUI has several different log levels. You can set them using the ESPUI.setVerbosity(Verbosity::VerboseJSON) function.

VerboseJSON outputs the most debug information.

If you have many different widgets it might be necessary to adjust the JSON Buffers used internally in ESPUI before .begin() :

You can add custom CSS styles to controls. This allows you to style the UI with custom colors, drop shadows, or other CSS effects. Add styles with the following functions:

Dynamic update of styles is supported. When either of the above functions are called, the control is updated live. This could be used to refect a warning state by changing the color of a button, or for similar effects.

For example, this code will set a control's panel to a random background color:

You can get quite creative with this.

Note: The images in this example are formed by setting a Label to contain an <img> tag:

Normally, whenever a control is added to the UI, a new panel is generated with a title. However, you can instead set the "parent" of a new control to be an existing control. This allows you to add multiple widgets into the same panel. For example:

The first call to addControl has no parent (or it could be set to a tab if you are using a tabbed UI), so therefore a new panel is added containing one button with the value Button A. The two subsequent calls have their parent set to the first control we added, so instead of creating a new panel, the result is the following:

The grouped controls operate entirely independently, and can be assigned different callbacks, or updated separately. The grouping is purely visual.

Most controls can be grouped this way, but the result is not always visually pleasant. This works best with labels, sliders, switchers, and buttons.

If you group too many elements it might throw the layout of the rest of the UI out of line. Consider adding separators to correct this.

Controls can be set to be displayed "wide" with the function:

Important! This function should be called before ESPUI.begin or results will be unreliable.

Setting a control to wide tells ESPUI to lay out that control as if there was only a single column, even on wide displays. This can be applied to every element to force a single column layout, or to individual elements to customise the display.

Note that this will have no effect on small screens.

If you want to work on the HTML/CSS/JS files, do make changes in the data directory. When you need to transfer that code to the ESP, run tools/prepare_static_ui_sources.py -a (this script needs python3 with the modules htmlmin, jsmin and csscompressor). This will generate a) minified files next to the original files and b) the C header files in src that contain the minified and gzipped HTML/CSS/JS data. Alternatively, you can specify the --source and --target arguments to the prepare_static_ui_sources.py script (run the script without arguments for help) if you want to use different locations.

If you don't have a python environment, you need to minify and gzip the HTML/CSS/JS files manually. I wrote a little useful jsfiddle for this, see here.

Liked this Library? You can support me by sending me a ☕️ Coffee.