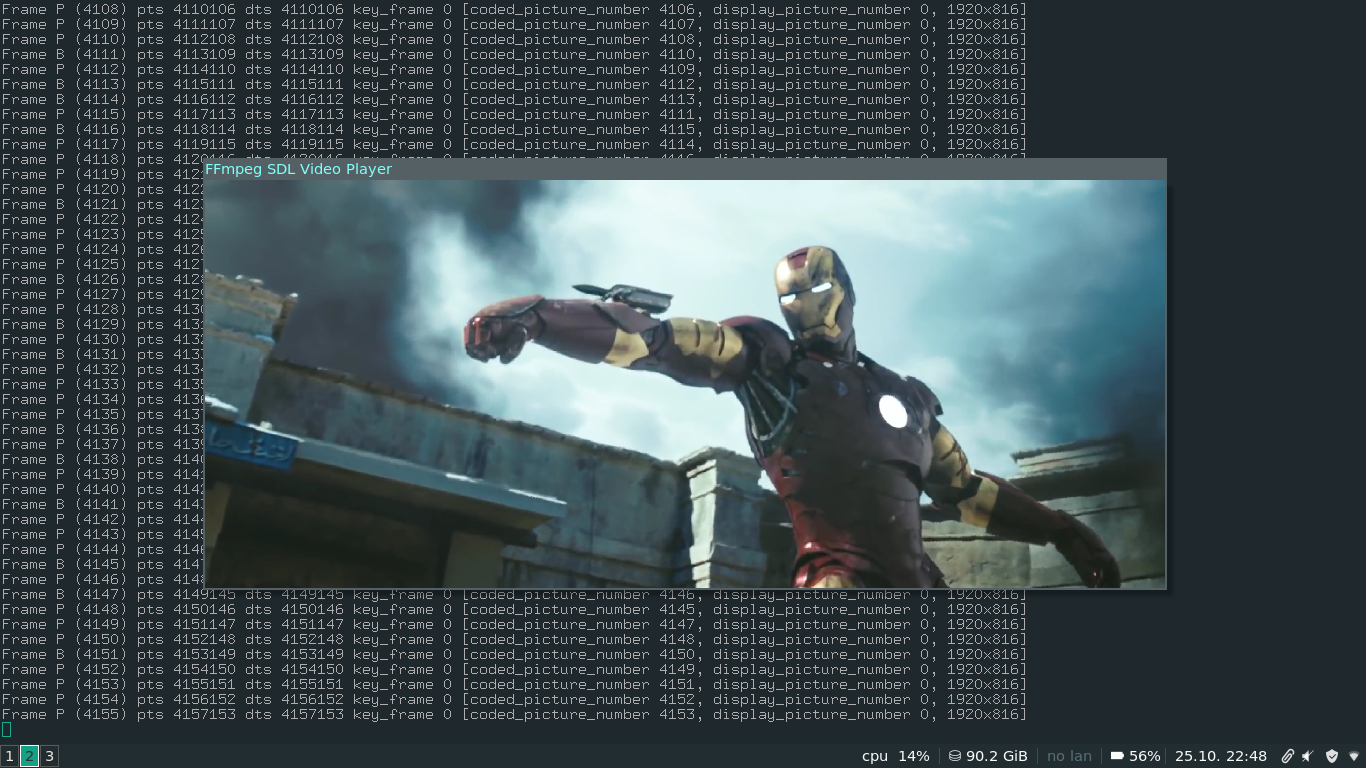 The project was developed on Arch Linux and all tutorials have been compiled and executed only on Arch Linux. To get everything ready to compile the source codes, just install FFMpeg:

For the development version, install the ffmpeg-git package.

There is also ffmpeg-full, which is built with as many optional features enabled as possible.

Each tutorial can be compiled manually using

In case you end up having this error when trying to execute one of the tutorials, then refer to the Tearing section below.

In case you end up having this error when trying to execute one of the tutorials, then you are probabily have nvidia drivers installed on your system with no NVIDIA Hardware. To check if this is the case, just run

if you find, among the other packages, the nvidia-340xx-utils and no NVIDIA hardware in your machine, then you have to remove it

Starting from tutorial03 and noticed some screen tearing happening when playing the media. To be precise vertical tearing.

At the time of this writing I am using Arch Linux and after making sure the problem was not my code and some troubleshooting I managed to fix the tearing.

First of all use the following command to find out your graphic card:

As you can see I am using the

Often it is not recommended, however for the DDX driver (which provides 2D acceleration in Xorg), install the xf86-video-intel package.

The SNA acceleration method causes tearing on some machines. To fix this, enable the "TearFree" option in the driver by adding the following line to your configuration file:

An FFmpeg and SDL Tutorial

This repo contains an updated and reviewed version of the original "An ffmpeg and SDL Tutorial or How to Write a Video Player in Less Than 1000 Lines".

FFmpeg is a wonderful library for creating video applications or even general purpose utilities. FFmpeg takes care of all the hard work of video processing by doing all the decoding, encoding, muxing and demuxing for you. This can make media applications much simpler to write. It's simple, written in C, fast, and can decode almost any codec you'll find in use today, as well as encode several other formats.

FFmpeg is a free software project, the product of which is a vast software suite of libraries and programs for handling video, audio, and other multimedia files and streams. At its core is the FFmpeg program itself, designed for command-line-based processing of video and audio files, widely used for format transcoding, basic editing (trimming and concatenation), video scaling, video post-production effects, and standards compliance (SMPTE, ITU). FFmpeg includes libavcodec, an audio/video codec library used by many commercial and free software products, libavformat (Lavf), an audio/video container mux and demux library, and the core ffmpeg command line program for transcoding multimedia files. FFmpeg is published under the GNU Lesser General Public License 2.1+ or GNU General Public License 2+ (depending on which options are enabled). The name of the project is inspired by the MPEG video standards group, together with "FF" for "fast forward". The logo uses a zigzag pattern that shows how MPEG video codecs handle entropy encoding. FFmpeg is part of the workflow of hundreds of other software projects, and its libraries are a core part of software media players such as VLC, and has been included in core processing for YouTube and the iTunes inventory of files. Codecs for the encoding and/or decoding of most of all known audio and video file formats is included, making it highly useful for the transcoding of common and uncommon media files into a single common format.

The only problem is that documentation is basically nonexistent. There is a single tutorial that shows the basics of FFmpeg and auto-generated doxygen documents. That's it. So, when I decided to learn about FFmpeg, and in the process about how digital video and audio applications work, I decided to document the process and present it as a tutorial.

There is a sample program that comes with ffmpeg called ffplay. It is a simple C program that implements a complete video player using FFmpeg. This tutorial will begin with an updated version of the original tutorial, written by Martin Böhme (I have stolen liberally borrowed from that work), and work from there to developing a working video player, based on Fabrice Bellard's ffplay.c. In each tutorial, I'll introduce a new idea (or two) and explain how we implement it. Each tutorial will have a C file so you can download it, compile it, and follow along at home. The source files will show you how the real program works, how we move all the pieces around, as well as showing you the technical details that are unimportant to the tutorial. By the time we are finished, we will have a working video player written in less than 1000 lines of code!

In making the player, we will be using SDL to output the audio and video of the media file. SDL is an excellent cross-platform multimedia library that's used in MPEG playback software, emulators, and many video games. You will need to download and install the SDL development libraries for your system in order to compile the programs in this tutorial.

This tutorial is meant for people with a decent programming background. At the very least you should know C and have some idea about concepts like queues, mutexes, and so on. You should know some basics about multimedia; things like waveforms and such, but you don't need to know a lot, as I explain a lot of those concepts in this tutorial.

This repo contains both the original (deprecated) and updated implementations for each tutorial.

The source codes originally written by Martin Bohme are also provided for ease of access.