This was migrated to https://awesomeopensource.com/project/rabbitmq/rabbitmq-server

This repository has been moved to the main unified RabbitMQ "monorepo", including all open issues. You can find the source under /deps/rabbitmq_sharding. All issues have been transferred.

This plugin introduces the concept of sharded queues for RabbitMQ. Sharding is performed by exchanges, that is, messages will be partitioned across "shard" queues by one exchange that we should define as sharded. The machinery used behind the scenes implies defining an exchange that will partition, or shard messages across queues. The partitioning will be done automatically for you, i.e: once you define an exchange as sharded, then the supporting queues will be automatically created on every cluster node and messages will be sharded across them.

This plugin is reasonably mature and known to have production users.

The following graphic depicts how the plugin works from the standpoint of a publisher and a consumer: 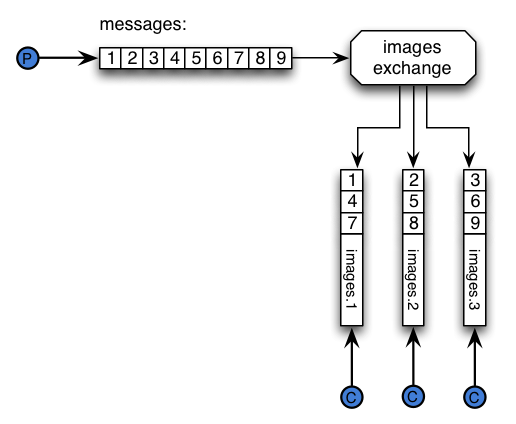 On the picture above the producers publishes a series of messages, those messages get partitioned to different queues, and then our consumer get messages from one of those queues. Therefore if there is a partition with 3 queues, it is assumed that there are at least 3 consumers to get all the messages from those queues.

Queues in RabbitMQ are units of concurrency (and, if there are enough cores available, parallelism). This plugin makes it possible to have a single logical queue that is partitioned into multiple regular queues ("shards"). This trades off total ordering on the logical queue for gains in parallelism.

Message distribution between shards (partitioning) is achieved with a custom exchange type that distributes messages by applying a hashing function to the routing key.

The exchanges that ship by default with RabbitMQ work in an "all or nothing" fashion, i.e: if a routing key matches a set of queues bound to the exchange, then RabbitMQ will route the message to all the queues in that set. For this plugin to work it is necessary to route messages to an exchange that would partition messages, so they are routed to at most one queue (a subset).

The plugin provides a new exchange type, "x-modulus-hash", that will use a hashing function to partition messages routed to a logical queue across a number of regular queues (shards).

There are other exchanges with similar behaviour: the Consistent Hash Exchange or the Random Exchange. Those were designed with regular queues in mind, not this plugin, so "x-modulus-hash" is highly recommended.

If message partitioning is the only feature necessary and the automatic scaling of the number of shards (covered below) is not needed or desired, consider using Consistent Hash Exchange instead of this plugin.

One of the main properties of this plugin is that when a new node is added to the RabbitMQ cluster, then the plugin will automatically create more shards on the new node. Say there is a shard with 4 queues on node a and node b just joined the cluster. The plugin will automatically create 4 queues on node b and "join" them to the shard partition. Already delivered messages will not be rebalanced but newly arriving messages will be partitioned to the new queues.

Consuming From a Sharded [Pseudo-]Queue

While the plugin creates a bunch of "shard" queues behind the scenes, the idea is that those queues act like a big logical queue where you consume messages from it. Total ordering of messages between shards is not defined.

An example should illustrate this better: let's say you declared the exchange images to be a sharded exchange. Then RabbitMQ creates several "shard" queues behind the scenes:

To consume from a sharded queue, register a consumer on the "images" pseudo-queue using the basic.consume method. RabbitMQ will attach the consumer to a shard behind the scenes. Note that consumers must not declare a queue with the same name as the sharded pseudo-queue prior to consuming.

How does it work? The plugin will chose the queue from the shard with the least amount of consumers, provided the queue contents are local to the broker you are connected to.

NOTE: there's a small race condition between RabbitMQ updating the queue's internal stats about consumers and when clients issue basic.consume commands. The problem with this is that if your client issue many basic.consume commands without too much time in between, it might happen that the plugin assigns the consumers to queues in an uneven way.

As of RabbitMQ 3.8.1, the plugin is no longer affected by the queue master locator policy when using mirrored queues. Please read below if you use a previous version.

This plugin can be affected by queue master locator policy used in the cluster as well as client connection load balancing strategy.

"Minimum masters" is a queue master locator that is most in line with the goals of this plugin.

For load balancers, the "least connections" strategy is more likely to produce an even distribution compared to round robin and other strategies.

How Evenly Will Messages Be Distributed?

As of RabbitMQ 3.6.0 this plugin is included into the RabbitMQ distribution.

Like any other RabbitMQ plugin it has to be enabled before it can be used:

Install the corresponding .ez files from our Community Plugins archive.

Then run the following command:

Once the plugin is installed you can define an exchange as sharded by setting up a policy that matches the exchange name. For example if we have the exchange called shard.images, we could define the following policy to shard it:

This will create 2 sharded queues per node in the cluster, and will bind those queues using the "1234" routing key.

Move to the umbrella folder an then run the following commands, to fetch dependencies:

Some information about how the plugin affects message ordering and some other details can be found in the file README.extra.md