A framework for the automated vulnerability analysis in IP-based networks that enables its modules to work collaboratively by sharing results.

AVAIN is a modular vulnerability analysis / penetration testing framework for computer networks and individual machines that allows its modules to work collaboratively to achieve more sophisticated results. Once you start an analysis with AVAIN, it uses its modules to enumerate, find vulnerabilities and assess the overall security level of an IP-based network or host. During the analysis, the most relevant results are shown directly in a comprehensible way. The complete and in depth results are saved for later to enable the user to fully retrace the assessment. In addition, AVAIN automatically aggregates certain types of results during the analysis to make it easier for modules to utilize them. Eventually the analysis finishes, upon which AVAIN outputs a final score between 0 and 10, where the higher the score, the more vulnerable / insecure the assessed object(s).

At its core, AVAIN is an extensible framework that uses modules to do vulnerability assessment. As such it offers several features that make it easier to develop completely new modules or build on top of existing ones. These features include:

For more information about AVAIN's framework features, look at the separate wiki page. To see how to develop new modules with Python, have a look at this wiki page.

The currently available modules can automatically:

A more detailed overview of the current modules, what they can do and how they work is available in the wiki. All of AVAIN's modules are highly configurable. As a small example, you can configure authentication cookies to be used or regex URLs to be excluded while scraping a website. For a full list of configuration parameters and how to use them properly, have look at the separate wiki page. In addition, despite AVAIN being fairly verbose during the analysis, all the result files that contain even more information are stored in AVAIN's output directory. While the file structure should be simple to understand, it is further explained in the wiki.

Important: If you intend to run AVAIN against a sensitive or valuable system, be sure to configure it properly beforehand and know what to expect. Some modules, e.g. the sqlmap module, can run aggressive / intrusive scans that may not be side-effect free and break things on the scanned host.

For demonstration purposes, AVAIN was run against Kioptrix 3 and Basic Pentesting 1 (with additional SMB service running) from VulnHub. Disclaimer: parts of the scan are sped up in the video, see the bottom right corner. Click on the image to go the video on YouTube: 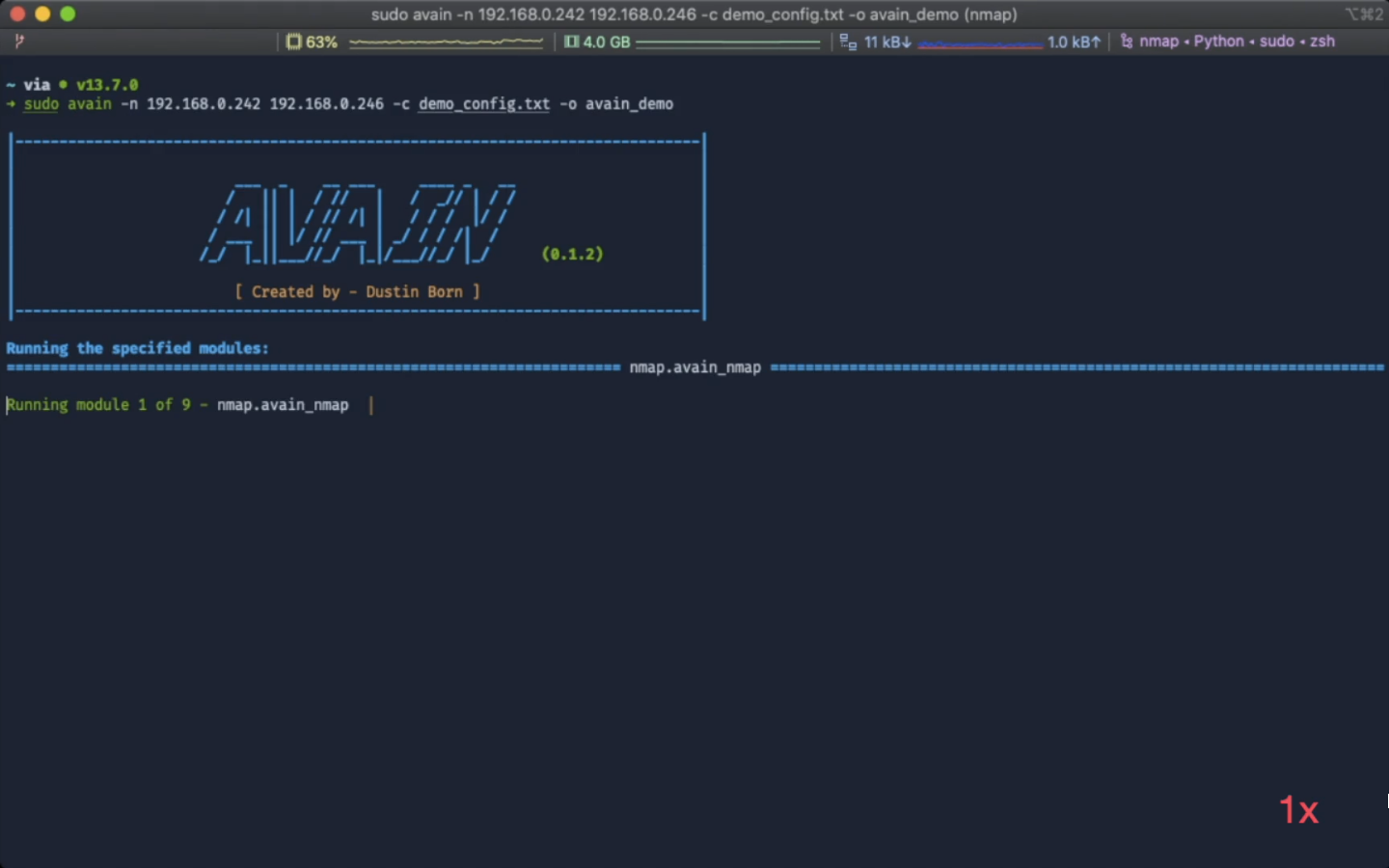 The obtained results are available in the sample_result folder.

AVAIN was made to work on Unix based systems. It was tested to work on macOS, Ubuntu Linux and Kali Linux. You can either install it directly on your system or use the available Dockerfile. To install it directly & automatically, run the install.sh script. As the script attempts to install AVAIN's required software, you may have to run it as root or get asked for a password. If you do not have apt (Linux) or Homebrew (macOS) as your package manager installed, you can simply change the package manager at the top of the script. For other issues feel free to open an issue. Since macOS by default does not have a package manager installed, you may have to install Homebrew first. For more information on the installation process and potential problems, see the wiki page.

To use AVAIN, simply call it by typing avain without any arguments in a terminal and you will see the following usage information:

Further insight on AVAIN's usage information is available at this wiki page.

The contents of the created output folder should mostly be simple to understand, but a separate wiki page goes into more detail.

Three more examples of how you can call AVAIN:

In case you have more question about AVAIN, the wiki is very detailed and explains AVAIN in great detail.

If you want to contribute, or have any questions or suggestions, use GitHub or directly contact me via Email here. If you found a bug or have other troubles, feel free to open an issue.

AVAIN is licensed under the MIT license, see here.

I originally created AVAIN as part of my Bachelor Thesis at TU Darmstadt (located in Germany) under the guidance of my advisor Rolf Egert. After my thesis I decided to continue working on AVAIN in my spare time. We presented a demo paper about AVAIN at NetSys '19. In addition, we presented a full paper based on AVAIN at the IEEE GLOBECOM 2019 Workshop on Security and Privacy in Smart, Cooperative IoT and CPS. For more info see the Publications wiki page.