Spatiotemporal data often comes in the form of dense arrays, with space and time being array dimensions. Examples include

This R package provides classes and methods for reading, manipulating, plotting and writing such data cubes, to the extent that there are proper formats for doing so.

The canonical data cube most of us have in mind is that where two dimensions represent spatial raster dimensions, and the third time (or band), as e.g. shown here: 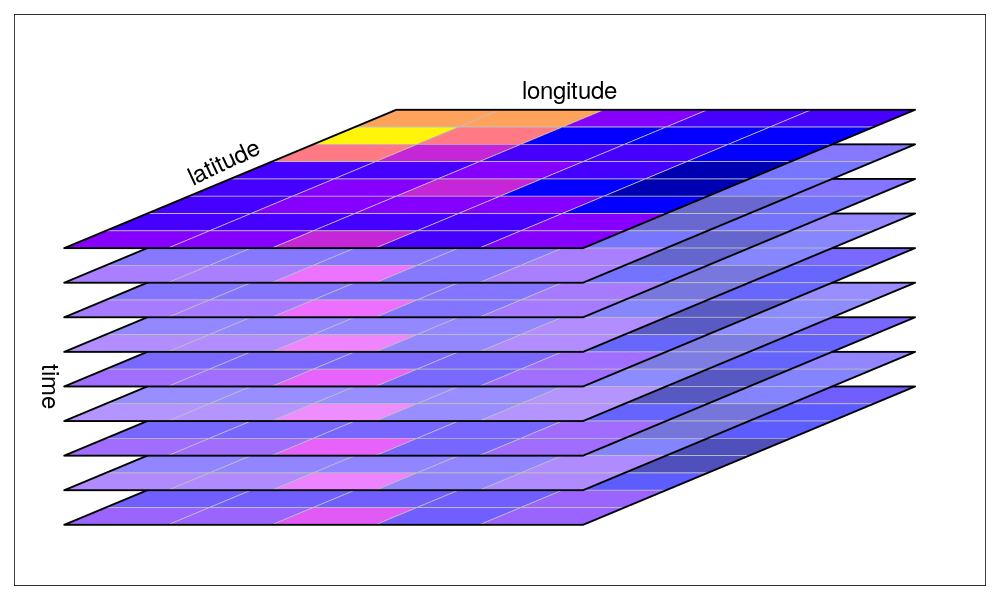 By data cubes however we also consider higher-dimensional cubes (hypercubes) such as a five-dimensional cube where in addition to time, spectral band and sensor form dimensions: 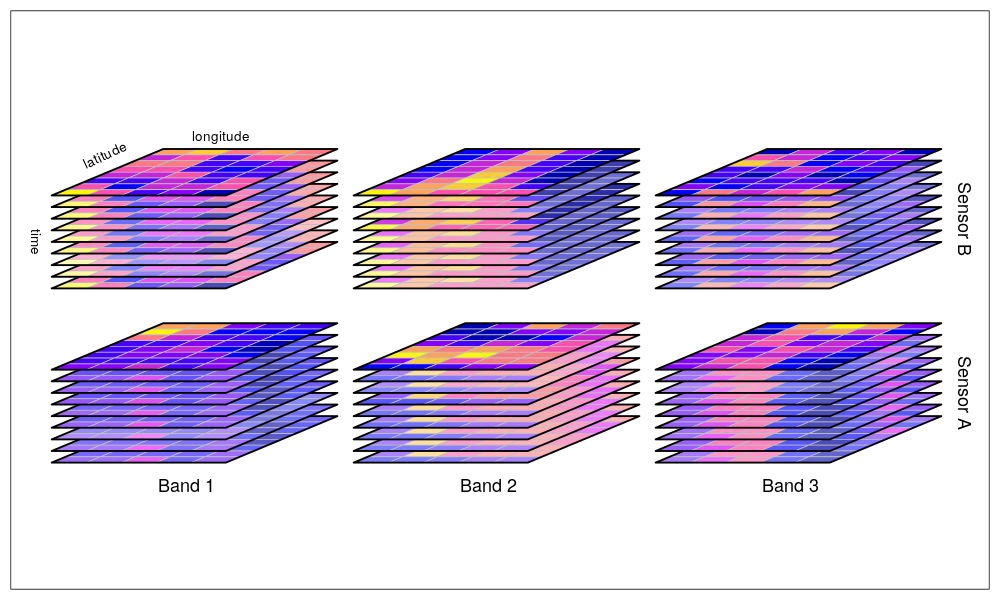 or lower-dimensional cubes such as a raster image: 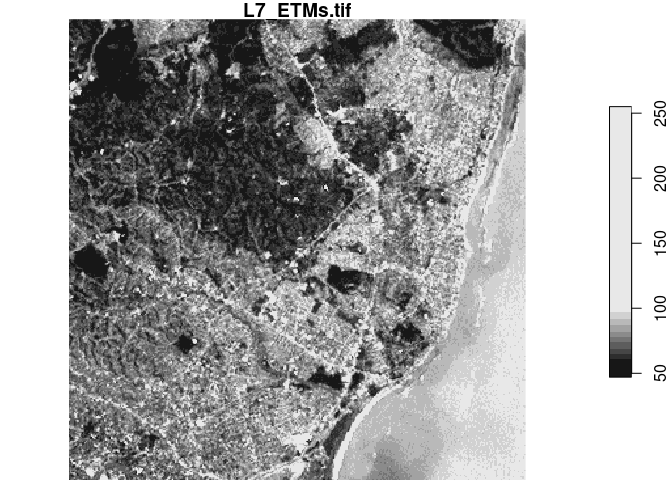 Raster data do not need to be regular and aligned with North/East, and package stars supports besides regular also rotated, sheared, rectilinear and curvilinear rasters: 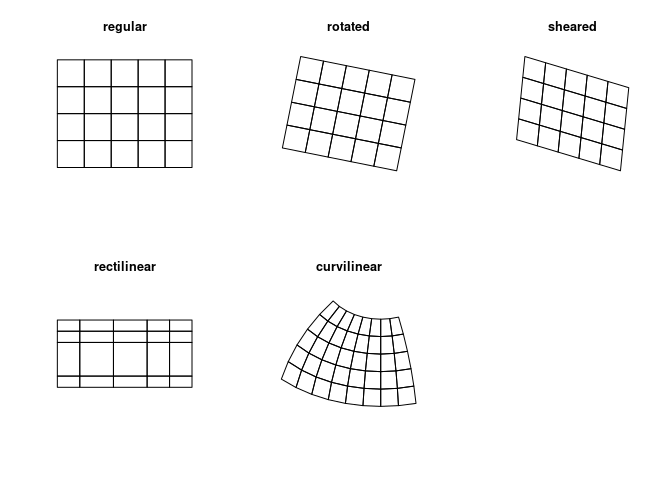 Vector data cubes arise when we do not have two regularly discretized spatial dimensions, but a single dimension that points to distinct spatial feature geometries, such as polygons (e.g. denoting administrative regions): 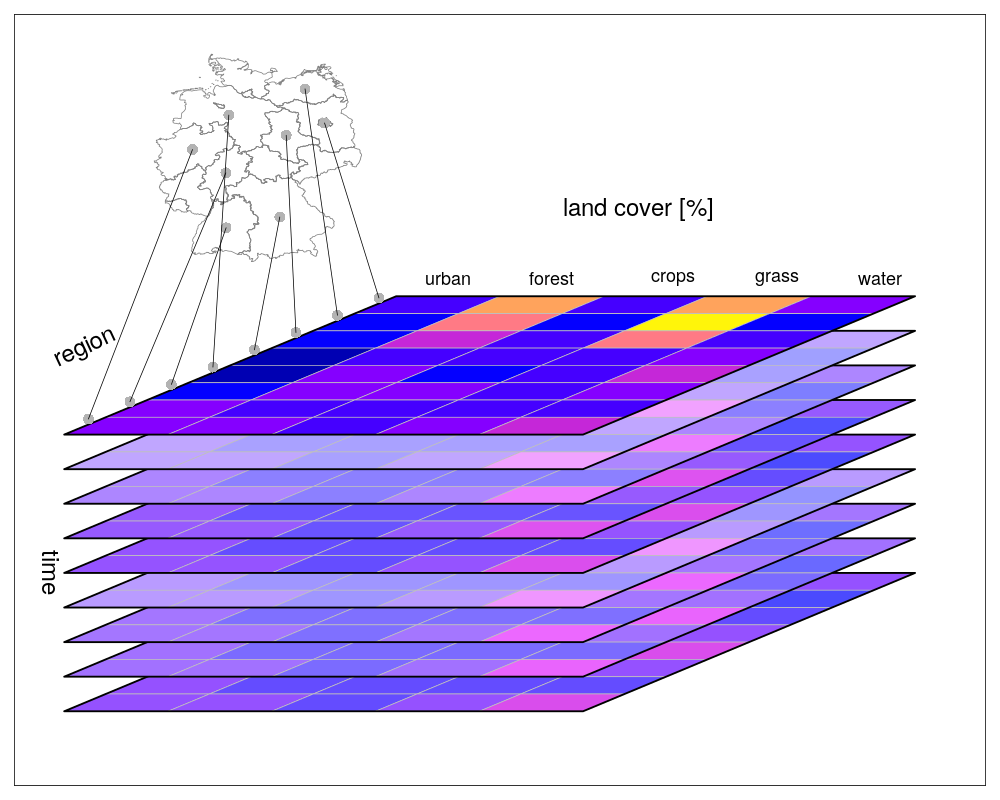 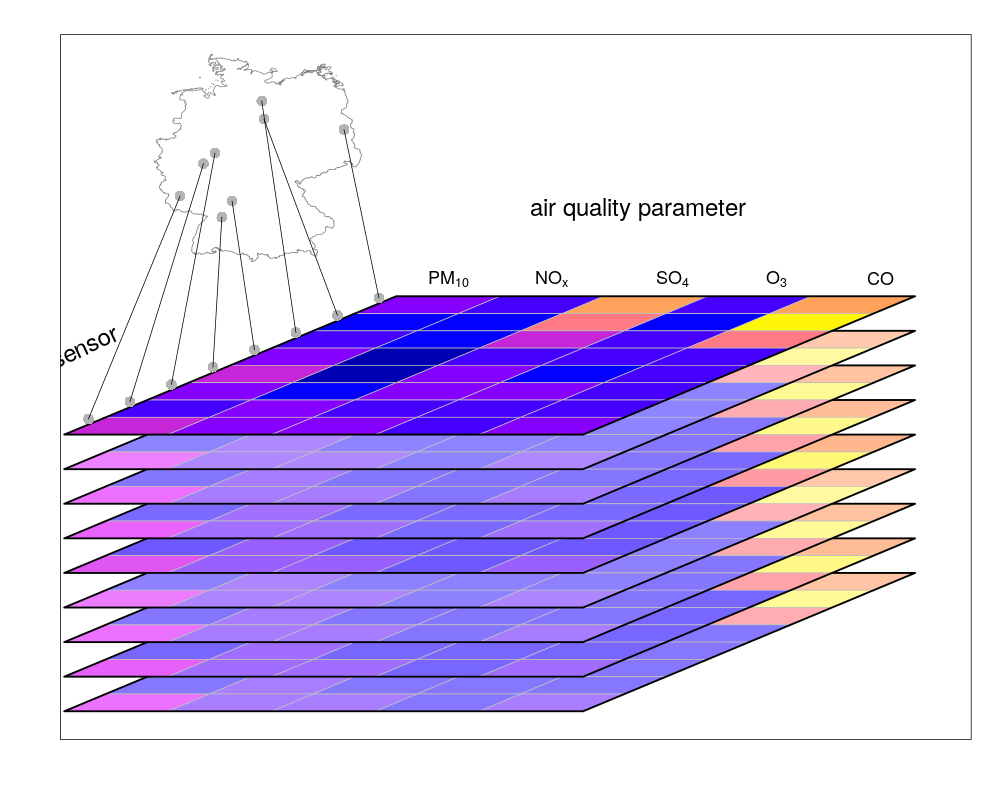 stars provides two functions to read data: read_ncdf and read_stars, where the latter reads through GDAL. (In the future, both will be integrated in read_stars.) For reading NetCDF files, package RNetCDF is used, for reading through GDAL, package sf provides the binary linking to GDAL.

For vector and raster operations, stars uses as much as possible the routines available in GDAL and PROJ (e.g. st_transform, rasterize, polygonize, warp). Read more about this in the vignette on vector-raster conversions, reprojection, warping.

Package stars provides stars_proxy objects (currently only when read through GDAL), which contain only the dimensions metadata and pointers to the files on disk. These objects work lazily: reading and processing data is postponed to the moment that pixels are really needed (at plot time, or when writing to disk), and is done at the lowest spatial resolution possible that still fulfills the resolution of the graphics device. More details are found in the stars proxy vignette.

The following methods are currently available for stars_proxy objects:

In the following, a curvilinear grid with hourly precipitation values of a hurricane is imported and the first 12 time steps are plotted: 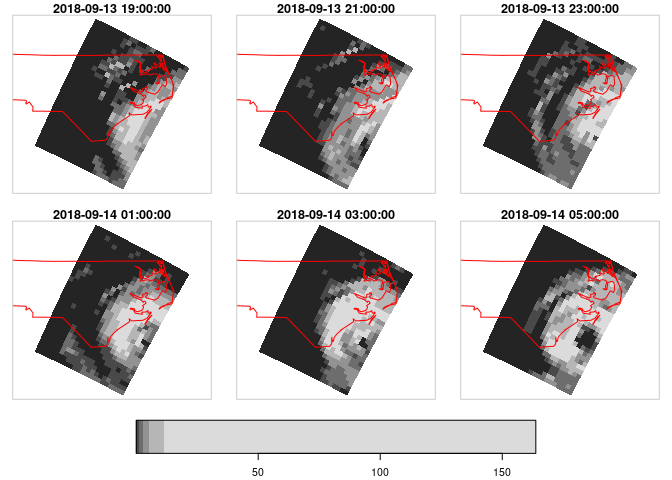 and next, intersected with with the counties of North Carolina, where the maximum precipitation intensity was obtained per county, and plotted: 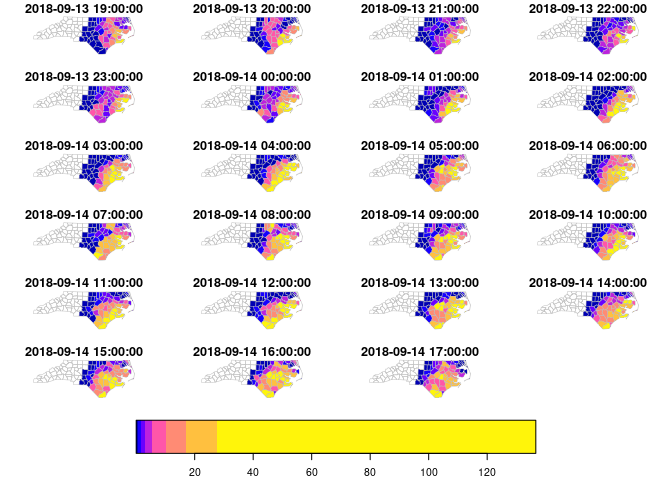 We can integrate over (reduce) time, for instance to find out when the maximum precipitation occurred. The following code finds the time index, and then the corresponding time value:

Other packages for data cubes

Package gdalcubes can be used to create data cubes (or functions from them) from image collections, sets of multi-band images with varying

ncdfgeom reads and writes vector data cubes from and to netcdf files in a standards-compliant way.

Package raster is a powerful package for handling raster maps and stacks of raster maps both in memory and on disk, but does not address

A list of stars commands matching existing raster commands is found in this wiki. A list of translations in the opposite direction (from stars to raster) still needs to be made.

This project has been realized with financial support from the