A wind rose is a graphic tool used by meteorologists to give a succinct view of how wind speed and direction are typically distributed at a particular location. It can also be used to describe air quality pollution sources. The wind rose tool uses Matplotlib as a backend. Data can be passed to the package using Numpy arrays or a Pandas DataFrame.

The initial use case of this library was for a technical report concerning pollution exposure and wind distributions analyzes. Data from local pollution measures and meteorologic informations from various sources like Meteo-France were used to generate a pollution source wind rose.

It is also used by some contributors for teaching purpose. 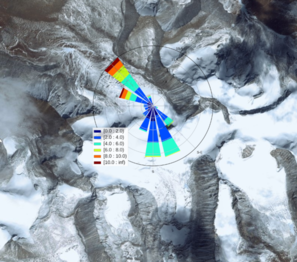 Some others contributors have used it to make figures for a wind power plant control optimization study.

Some academics use it to track lightning strikes during high intensity storms. They are using it to visualize the motion of storms based on the relative position of the lightning from one strike to the next.

A package is available and can be downloaded from PyPi and installed using:

The bar plot wind rose is the most common plot

This kind of plot can be plot using:

Full documentation of library is available at http://windrose.readthedocs.io/

You can help to develop this library.

If you are using Python Windrose and want to interact with developers, others users... we encourage you to follow our code of conduct.

If you discover issues, have ideas for improvements or new features, please report them. CONTRIBUTING.md explains how to contribute to this project.