Netsix allows you to share videos with your friends in a real peer-to-peer manner using WebRTC. 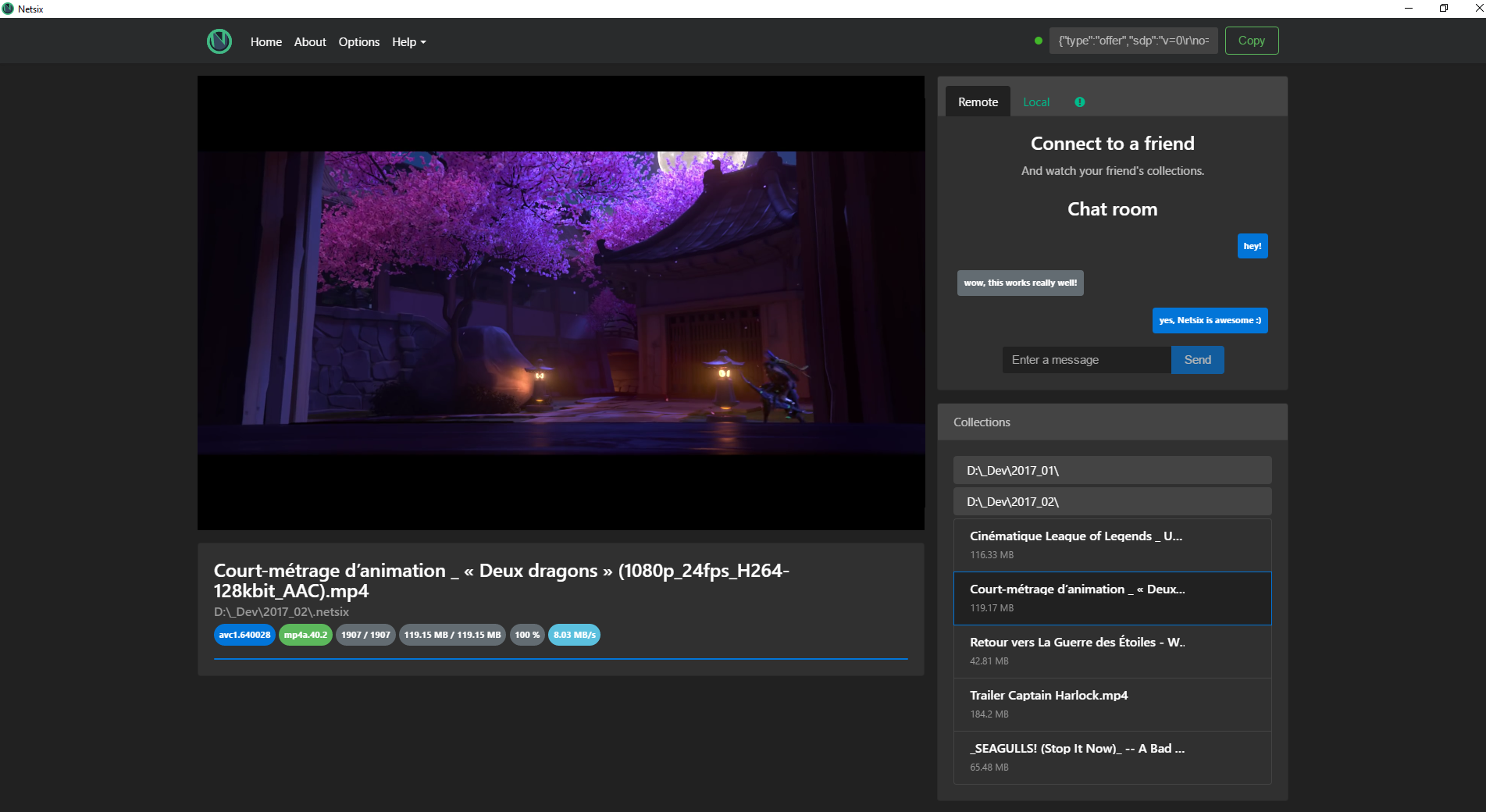 Download Netsix by visiting the "releases" tab and selecting the executable of the last version (for example Netsix-Setup-1.0.0-alpha.6.exe).

You have to be two to test this application. So find a friend with some cool videos on his computer and then follow the steps described in the Getting started section of the Netsix website.

Be aware that a current limitation of the Netsix alpha is that we only handle 1-1 connections. If someone wants to connect to you, he will encounter an error if you are already connected to someone else. We plan to implement the support for simultaneous connections later as this is technically possible as described in the simple-peer documentation.

This project is still in early alpha and a lot of improvements could be made.

Also please note that we will not be responsible for any devious usage of the app. In its current state this project is more a technical demo of how to stream videos using WebRTC and the Media Source Extensions API than a really usable and full-featured software.

With that in mind, if you want to make a PR to improve the app you are very welcome!

Before hitting beta, we hope to have implemented the following features:

More information can be found here.

I used the Git Commit Guidelines that Google uses for AngularJS to format my git commit messages. Here is an excerpt of those guidelines.

We have very precise rules over how our git commit messages can be formatted. This leads to more readable messages that are easy to follow when looking through the project history.

Each commit message consists of a header, a body and a footer. The header has a special format that includes a type, a scope and a subject:

Any line of the commit message cannot be longer 100 characters! This allows the message to be easier to read on GitHub as well as in various git tools.

If the commit reverts a previous commit, it should begin with revert:, followed by the header of the reverted commit. In the body it should say: This reverts commit <hash>., where the hash is the SHA of the commit being reverted.

Must be one of the following:

The scope could be anything specifying place of the commit change. For example $location, $browser, $compile, $rootScope, ngHref, ngClick, ngView, etc...

You can use * when the change affects more than a single scope.

The subject contains succinct description of the change:

Just as in the subject, use the imperative, present tense: "change" not "changed" nor "changes". The body should include the motivation for the change and contrast this with previous behavior.

The footer should contain any information about Breaking Changes and is also the place to [reference GitHub issues that this commit closes][closing-issues].

Breaking Changes should start with the word BREAKING CHANGE: with a space or two newlines. The rest of the commit message is then used for this.

A detailed explanation can be found in this document.

If you have a feature request or found a bug, let me know.

This project was generated from electron-vue using vue-cli. Documentation about this project can be found here.