Important Notice: If you migrate to v0.6.0 and use a user password and default key stretching function migration is needed due to a security issue. See migration guide in the changelog for v0.6.0

The following example shows some of the configurations available to the developer:

A xml file named like f1a4e61ffb59c6e6a3d6ceae9a20cb5726aade06.xml will be created with the resulting data looking something like that after the first put operation:

Unfortunately Android SDK 19 (KITKAT) does not fully support AES GCM mode. Therefore a backwards compatible implementation of AES using CBC with Encrypt-then-MAC can be used to support this library on older devices. This should provide the same security strength as the GCM version, however the support must be enabled manually:

In this mode, if on a KitKat device the backwards-compatible implementation is used, the default AES-GCM version otherwise. Upgrading to a newer OS version the content should still be decryptable, while newer content will then be encrypted with the AES-GCM version.

A high entropy value not known to any system but the user is a good and strong base for a cryptographic key. Unfortunately user-based passwords are often weak (low-entropy). To mitigate that fact and help preventing easy brute-forcing key derivation functions with key stretching properties are used. These functions calculate pseudo-random data from it's source material which requires mandatory work.

The following implementations are available:

Note, if you use key stretching put/get operations will get very slow (depeding on the work factor of course), so consider accessing the store in a background thread.

This store bases part of it's security on so called fingerprinting. That basically means, during runtime entropy from e.g. the device, system or other parts are used to create a cryptographic key with which the data is encrypted. It basically is encryption with a semi-secret key.

This has the following benefits:

This store has a default implementation of EncryptionFingerprint which can only use generic data. In detail the following properties are incorporated:

Enhancing the Strength of the Encryption Fingerprint

The security of this mechanism increases considerably if the user adds it's own data. Here are some suggestions:

The cryptographic key used to encrypt the data is composed of the following parts: 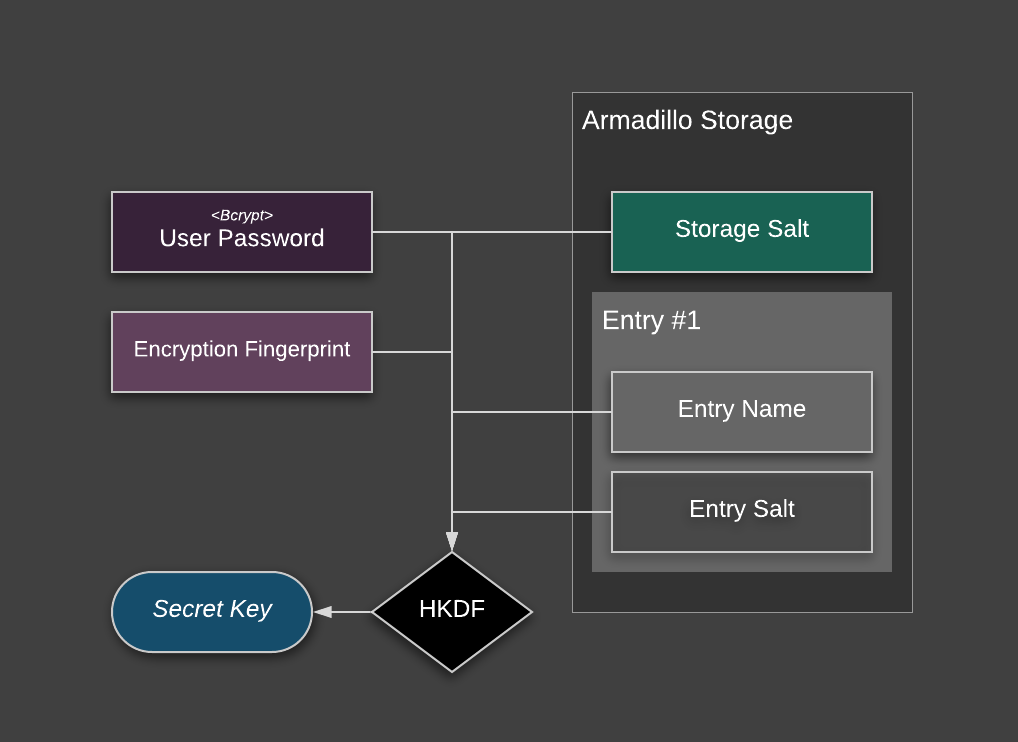 The concatenated key material will be derived and stretched to the desired length with HKDF derivation function.

The key is hashed with HKDF (which uses Hmac with Sha512 internally) expanded to a 20 byte hash which will be encoded with base16 (hex). The key generation is salted by the encryption fingerprint, so different shared preferences will generate different hashes for the same keys.

The diagram below illustrates the used data format. To disguise the format a little bit it will be obfuscated by a simple xor cipher.

The resulting data will be encoded with base64 and looks like this in the shared preferences xml:

All tags and commits by me are signed with git with my private key:

Assemble the lib with the following command

The .aar files can then be found in /armadillo/build/outputs/aar folder