Welcome to my world. This is a collection of vim, tmux, and zsh configurations. Interested in a video walkthrough of the dotfiles? Check out my talk, vim + tmux. 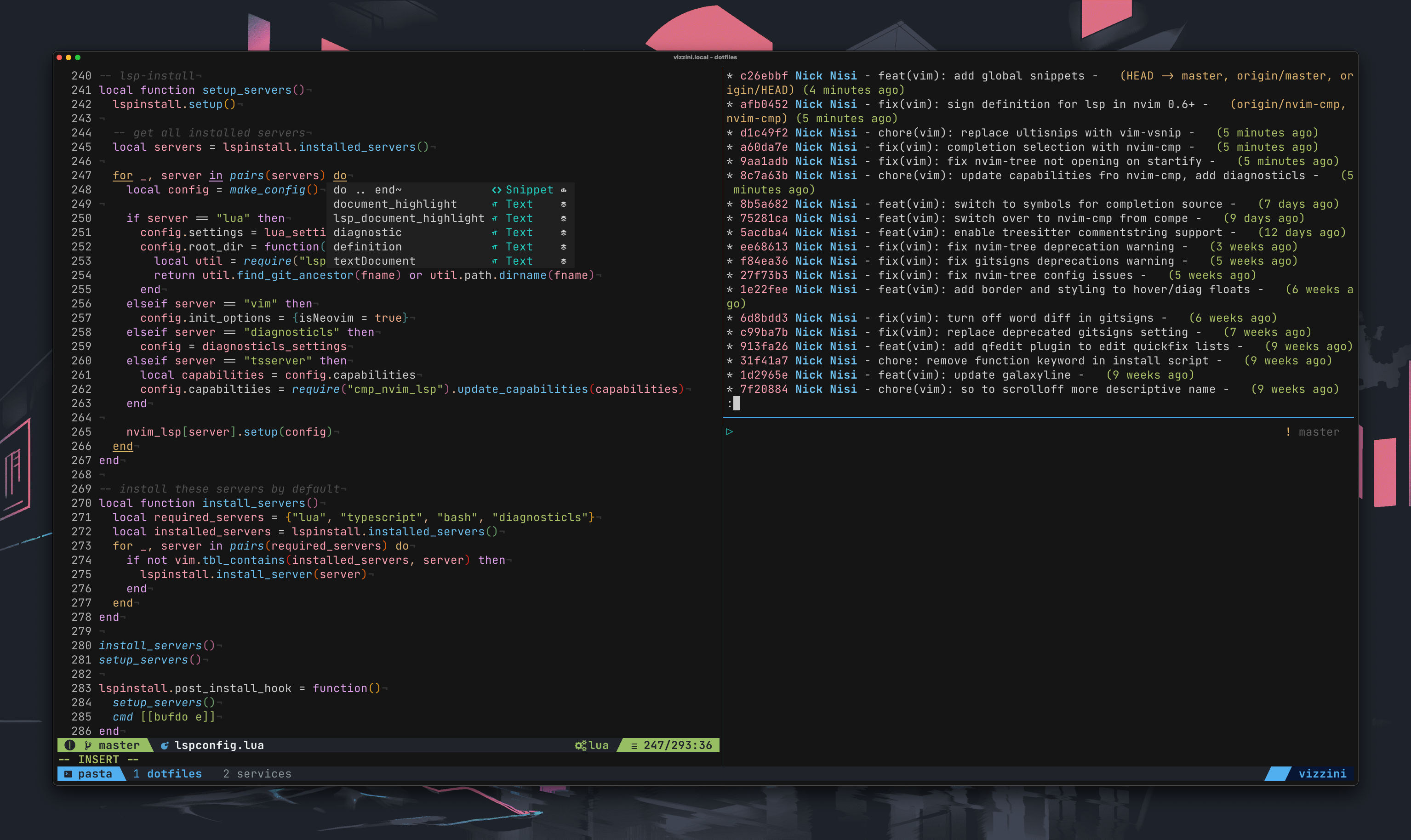 First, you may want to backup any existing files that exist so this doesn't overwrite your work.

Run install/backup.sh to backup all symlinked files to a ~/dotfiles-backup directory.

This will not delete any of these files, and the install scripts will not overwrite any existing. After the backup is complete, you can delete the files from your home directory to continue installation.

If on OSX, you will need to install the XCode CLI tools before continuing. To do so, open a terminal and type

Then, clone the dotfiles repository anywhere you like on your machine.

Next, the install script will perform a check to see if it is running on an OSX machine. If so, it will install Homebrew if it is not currently installed and will install the homebrew packages listed in Brewfile. Then, it will run osx.sh and change some OSX configurations. This file is pretty well documented and so it is advised that you read through and comment out any changes you do not want.

In order to properly support italic fonts in and out of tmux, a couple of terminal capabilities need to be described. Run the following from the root of the project:

ZSH is configured in the zshrc.symlink file, which will be symlinked to the home directory. The following occurs in this file:

The prompt is meant to be simple while still providing a lot of information to the user, particularly about the status of the git project, if the PWD is a git project. This prompt sets precmd, PROMPT and RPROMPT. The precmd shows the current working directory in it and the RPROMPT shows the git and suspended jobs info. The main symbol used on the actual prompt line is ❯.

The prompt attempts to speed up certain information lookups by allowing for the prompt itself to be asynchronously rewritten as data comes in. This prevents the prompt from feeling sluggish when, for example, the user is in a large git repo and the git prompt commands take a considerable amount of time.

It does this by writing the actual text that will be displayed int he prompt to a temp file, which is then used to update the prompt information when a signal is trapped.

The git info shown on the RPROMPT displays the current branch name, along with the following symbols.

The prompt will also display a ✱ character in the RPROMPT indicating that there is a suspended job that exists in the background. This is helpful in keeping track of putting vim in the background by pressing CTRL-Z.

If a package.json file or a node_modules directory exists in the current working directory, display the node symbol, along with the current version of Node. This is useful information when switching between projects that depend on different versions of Node.

Neovim is a fork and drop-in replacement for vim. in most cases, you would not notice a difference between the two, other than Neovim allows plugins to run asynchronously so that they do not freeze the editor, which is the main reason I have switched over to it. Vim and Neovim both use Vimscript and most plugins will work in both (all of the plugins I use do work in both Vim and Neovim). For this reason, they share the same configuration files in this setup. Neovim uses the XDG base directory specification which means it won't look for a .vimrc in your home directory. Instead, its configuration looks like the following:

link.sh will symlink the XDG configuration directory into your home directory and will then create symlinks for .vimrc and .vim over to the Neovim configuration so that Vim and Neovim will both be configured in the same way from the same files. The benefit of this configuration is that you only have to maintain a single vim configuration for both, so that if Neovim (which is still alpha software) has issues, you can very seamlessly transition back to vim with no big impact to your productivity.

Inside of .zshrc, the EDITOR shell variable is set to nvim, defaulting to Neovim for editor tasks, such as git commit messages. Additionally, I have aliased vim to nvim in aliases.zsh You can remove this if you would rather not alias the vim command to nvim.

vim and neovim should just work once the correct plugins are installed. To install the plugins, you will need to open Neovim in the following way:

I am currently using Operator Mono as my default font which is a paid font ($199 US) and does not include Powerline support. You do not need this font at all and there is nothing directly referencing it in the setup. For a great, free programming font, check out Mozilla's Fira. In addition to this, I do have nerd-fonts installed and configured to be used for non-ascii characters via iTerm2's profile settings. If you would prefer not to do this, then simply remove the Plug 'ryanoasis/vim-devicons' plugin from vim/nvim.

Tmux is a terminal multiplexor which lets you create windows and splits in the terminal that you can attach and detach from. I use it to keep multiple projects open in separate windows and to create an IDE-like environment to work in where I can have my code open in vim/neovim and a shell open to run tests/scripts. Tmux is configured in ~/.tmux.conf, and in ~/tmux/base16.sh, which defines the colors used, the layout of the tmux bar, and what what will be displayed, including the time and date, open windows, tmux session name, computer name, and current iTunes song playing. If not running on macOS, this configuration should be removed.

A Dockerfile exists in the repository as a testing ground for linux support. To set up the image, make sure you have Docker installed and then run the following command.

This should create a dotfiles image which will set up the base environment with the dotfiles repo cloned. To run, execute the following command.

This will open a bash shell in the container which can then be used to manually test the dotfiles installation process with linux.

If you have questions, notice issues, or would like to see improvements, please open a new discussion and I'm happy to help you out!