Ratarmount collects all file positions inside a TAR so that it can easily jump to and read from any file without extracting it. It, then, mounts the TAR using fusepy for read access just like archivemount. In contrast to libarchive, on which archivemount is based, random access and true seeking is supported. And in contrast to tarindexer, which also collects file positions for random access, ratarmount offers easy access via FUSE and support for compressed TARs.

You can install ratarmount either by simply downloading the AppImage or via pip. The latter might require installing additional dependencies.

The AppImage files are attached under "Assets" on the releases page. They require no installation and can be simply executed like a portable executable. If you want to install it, you can simply copy it into any of the folders listed in your PATH.

Python 3.6+, preferably pip 19.0+, FUSE, and sqlite3 are required. These should be preinstalled on most systems. On Debian-like systems like Ubuntu, you can install/update all dependencies using:

On macOS, you have to install macFUSE with:

If you are installing on a system for which there exists no manylinux wheel, then you'll have to install dependencies required to build from source:

Then, you can simply install ratarmount from PyPI:

Or, if you want to test the latest version:

For xz support, lzmaffi will be used if available. Because lzmaffi does not provide wheels and the build from source depends on cffi, which might be missing, only python-xz is a dependency of ratarmount. If there are problems with xz files, please report any encountered issues. But, as a quick workaround, you can try to simply switch out the xz decoder backend by installing lzmaffi manually and ratarmount will use that instead with higher priority: 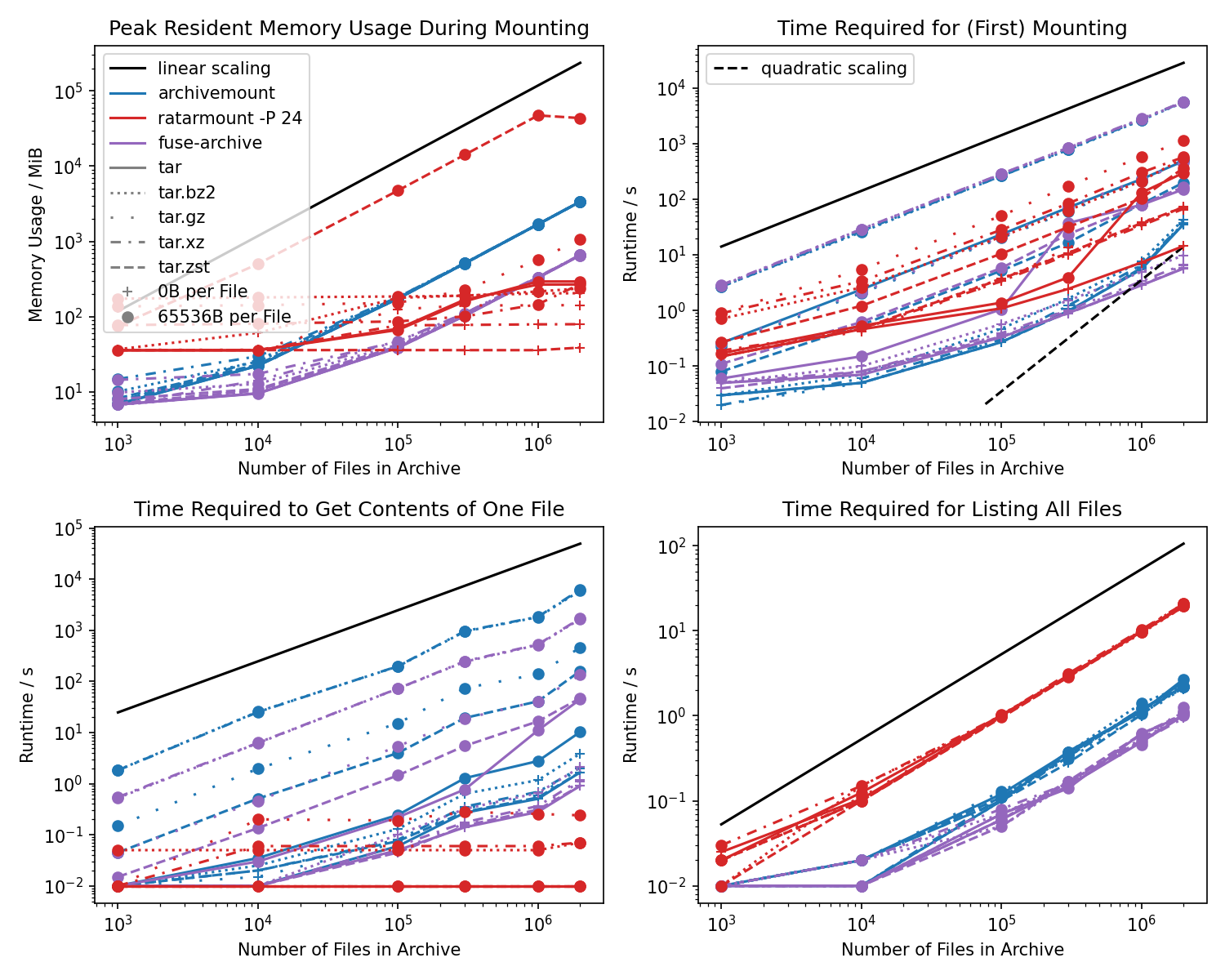 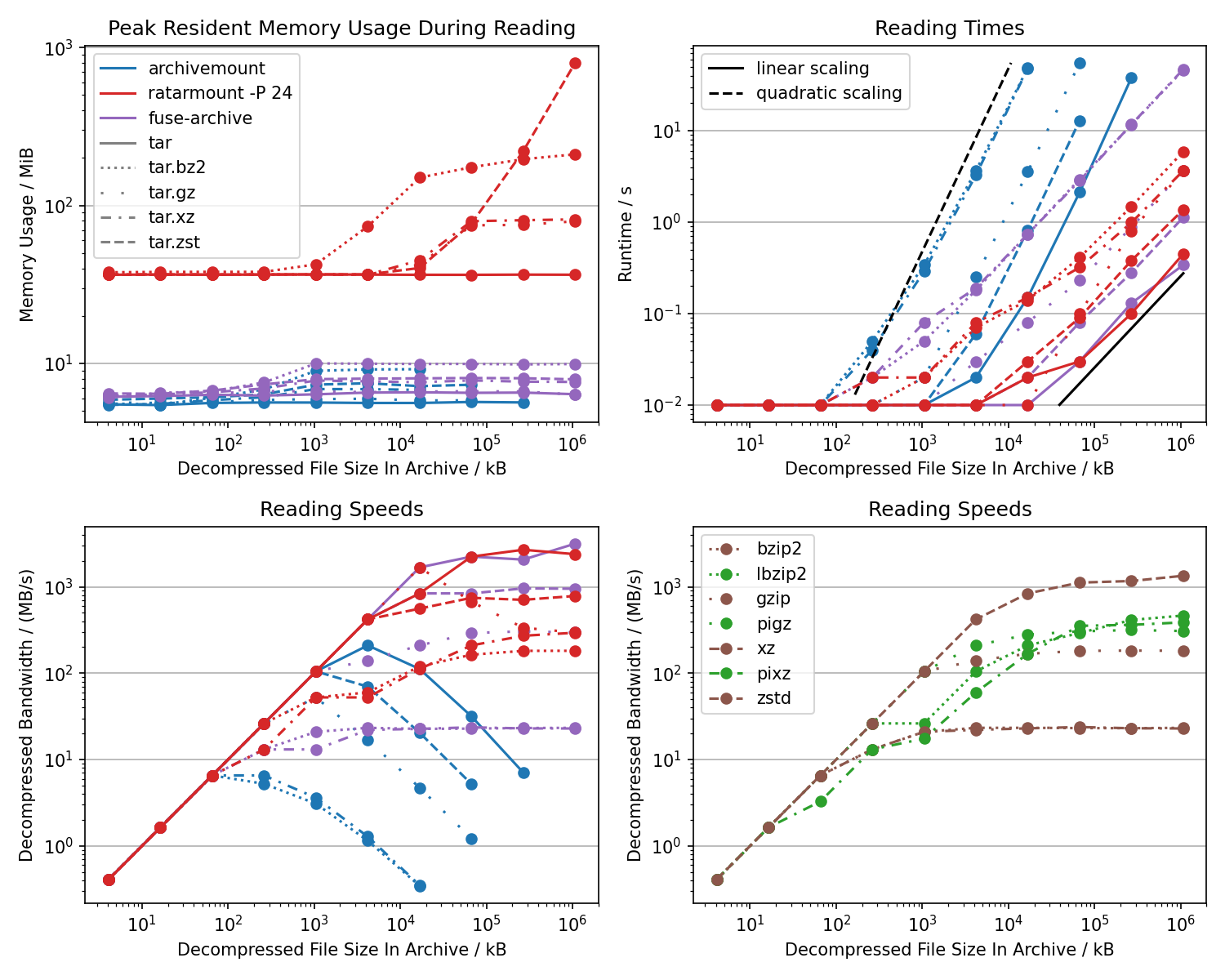 Further benchmarks can be viewed here.

You downloaded a large TAR file from the internet, for example the 1.31TB large ImageNet, and you now want to use it but lack the space, time, or a file system fast enough to extract all the 14.2 million image files.

Archivemount seems to have large performance issues for too many files and large archive for both mounting and file access in version 0.8.7. A more in-depth comparison benchmark can be found here.

Tarindex is a command line to tool written in Python which can create index files and then use the index file to extract single files from the tar fast. However, it also has some caveats which ratarmount tries to solve:

I didn't find out about TAR Browser before I finished the ratarmount script. That's also one of it's cons:

Ratarmount creates an index file with file names, ownership, permission flags, and offset information. This sidecar is stored at the TAR file's location or in ~/.ratarmount/. Ratarmount can load that index file in under a second if it exists and then offers FUSE mount integration for easy access to the files inside the archive.

The test with the first version (50e8dbb), which used the removed pickle backend for serializing the metadata index, for the ImageNet data set is promising:

The reading time for a small file simply verifies the random access by using file seek to be working. The difference between the first read and subsequent reads is not because of ratarmount but because of operating system and file system caches.

Here is a more recent test for version 0.2.0 with the new default SQLite backend:

In order to reduce the mounting time, the created index for random access to files inside the tar will be saved to one of these locations. These locations are checked in order and the first, which works sufficiently, will be used. This is the default location order:

The mount sources can be TARs and/or folders. Because of that, ratarmount can also be used to bind mount folders read-only to another path similar to bindfs and mount --bind. So, for:

all files in folder will now be visible in mountpoint.

If multiple mount sources are specified, the sources on the right side will be added to or update existing files from a mount source left of it. For example:

will make both, the files from folder1 and folder2, visible in mountpoint. If a file exists in both multiple source, then the file from the rightmost mount source will be used, which in the above example would be folder2.

If you want to update / overwrite a folder with the contents of a given TAR, you can specify the folder both as a mount source and as the mount point:

The FUSE option -o nonempty will be automatically added if such a usage is detected. If you instead want to update a TAR with a folder, you only have to swap the two mount sources:

If a file exists multiple times in a TAR or in multiple mount sources, then the hidden versions can be accessed through special

and the file foo exists both in the folder and as two different versions in updated.tar. Then, you can list all three versions using:

Note that these version numbers are the same as when used with tar's --occurrence=N option.

Use ratarmount -o modules=subdir,subdir=<prefix> to remove path prefixes using the FUSE subdir module. Because it is a standard FUSE feature, the -o ... argument should also work for other FUSE applications.

When mounting an archive created with absolute paths, e.g., tar -P cf /var/log/apt/history.log, you would see the whole var/log/apt hierarchy under the mount point. To avoid that, specified prefixes can be stripped from paths so that the mount target directory directly contains history.log. Use ratarmount -o modules=subdir,subdir=/var/log/apt/ to do so. The specified path to the folder inside the TAR will be mounted to root, i.e., the mount point.

If you want a compressed file not containing a TAR, e.g., foo.bz2, then you can also use ratarmount for that. The uncompressed view will then be mounted to <mountpoint>/foo and you will be able to leverage ratarmount's seeking capabilities when opening that file.

In contrast to bzip2 and gzip compressed files, true seeking on xz and zst files is only possible at block or frame boundaries. This wouldn't be noteworthy, if both standard compressors for xz and zstd were not by default creating unsuited files. Even though both file formats do support multiple frames and xz even contains a frame table at the end for easy seeking, both compressors write only a single frame and/or block out, making this feature unusable. In order to generate truly seekable compressed files, you'll have to use pixz for xz files. For zstd compressed, you can try with t2sz. The standard zstd tool does not support setting smaller block sizes yet although an issue does exist. Alternatively, you can simply split the original file into parts, compress those parts, and then concatenate those parts together to get a suitable multiframe zst file. Here is a bash function, which can be used for that:

In order to compress a file named foo into a multiframe zst file called foo.zst, which contains frames sized 4MiB of uncompressed ata, you would call it like this:

It also works when being piped to. This can be useful for recompressing files to avoid having to decompress them first to disk.

Ratarmount can also be used as a library. Using ratarmountcore, files inside archives can be accessed directly from Python code without requiring FUSE. For a more detailed description, see the ratarmountcore readme here.

If ratarmount helped you out and satisfied you so much that you can't help but want to donate, you can toss a coin to your programmer through one of these addresses:

Pinefs ⭐ 10
Aaron Lav's Python NFS server - local copy
most recent commit 9 years ago
Snap To Bucket ⭐ 4
A python tool to automate moving AWS snapshots into an AWS S3 bucket and restore backups from there as an AWS EBS volume.
most recent commit 3 months ago