Easily train your own text-generating neural network of any size and complexity on any text dataset with a few lines of code, or quickly train on a text using a pretrained model.

textgenrnn is a Python 3 module on top of Keras/TensorFlow for creating char-rnns, with many cool features:

You can play with textgenrnn and train any text file with a GPU for free in this Colaboratory Notebook! Read this blog post or watch this video for more information!

The included model can easily be trained on new texts, and can generate appropriate text even after a single pass of the input data.

The model weights are relatively small (2 MB on disk), and they can easily be saved and loaded into a new textgenrnn instance. As a result, you can play with models which have been trained on hundreds of passes through the data. (in fact, textgenrnn learns so well that you have to increase the temperature significantly for creative output!)

You can also train a new model, with support for word level embeddings and bidirectional RNN layers by adding new_model=True to any train function.

It's also possible to get involved in how the output unfolds, step by step. Interactive mode will suggest you the top N options for the next char/word, and allows you to pick one.

When running textgenrnn in the terminal, pass interactive=True and top=N to generate. N defaults to 3.

This can add a human touch to the output; it feels like you're the writer! (reference)

textgenrnn can be installed from pypi via pip:

For the latest textgenrnn, you must have a minimum TensorFlow version of 2.1.0.

You can view a demo of common features and model configuration options in this Jupyter Notebook.

/weights contains further-pretrained models on the aforementioned datasets which can be loaded into textgenrnn.

/outputs contains examples of text generated from the above pretrained models.

textgenrnn is based off of the char-rnn project by Andrej Karpathy with a few modern optimizations, such as the ability to work with very small text sequences. 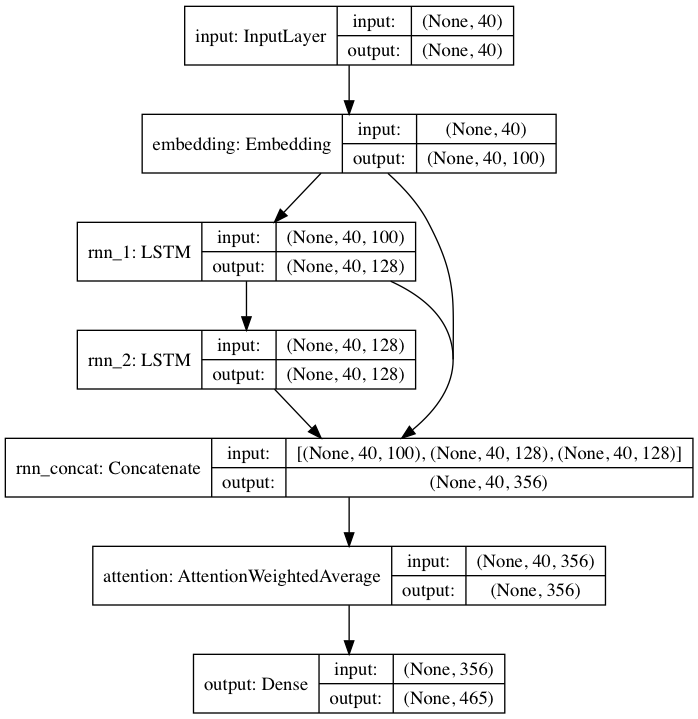 The included pretrained-model follows a neural network architecture inspired by DeepMoji. For the default model, textgenrnn takes in an input of up to 40 characters, converts each character to a 100-D character embedding vector, and feeds those into a 128-cell long-short-term-memory (LSTM) recurrent layer. Those outputs are then fed into another 128-cell LSTM. All three layers are then fed into an Attention layer to weight the most important temporal features and average them together (and since the embeddings + 1st LSTM are skip-connected into the attention layer, the model updates can backpropagate to them more easily and prevent vanishing gradients). That output is mapped to probabilities for up to 394 different characters that they are the next character in the sequence, including uppercase characters, lowercase, punctuation, and emoji. (if training a new model on a new dataset, all of the numeric parameters above can be configured) 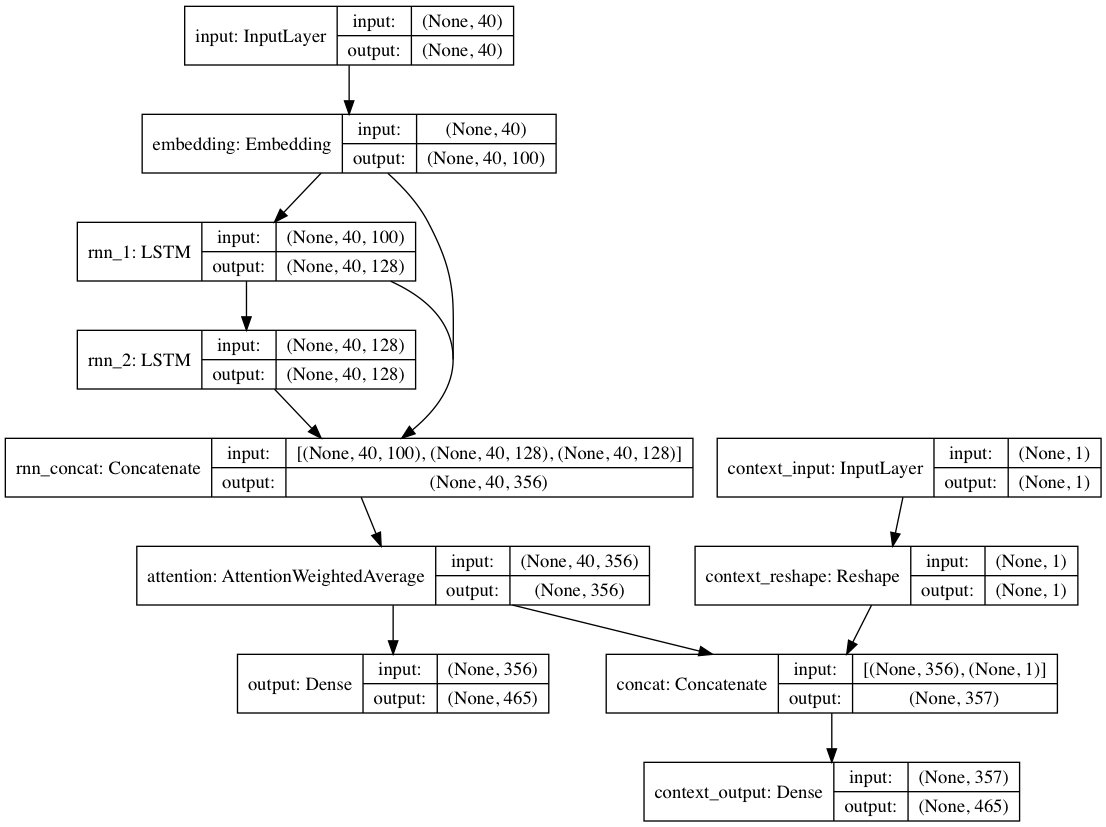 Alternatively, if context labels are provided with each text document, the model can be trained in a contextual mode, where the model learns the text given the context so the recurrent layers learn the decontextualized language. The text-only path can piggy-back off the decontextualized layers; in all, this results in much faster training and better quantitative and qualitative model performance than just training the model gien the text alone.

The model weights included with the package are trained on hundreds of thousands of text documents from Reddit submissions (via BigQuery), from a very diverse variety of subreddits. The network was also trained using the decontextual approach noted above in order to both improve training performance and mitigate authorial bias.

When fine-tuning the model on a new dataset of texts using textgenrnn, all layers are retrained. However, since the original pretrained network has a much more robust "knowledge" initially, the new textgenrnn trains faster and more accurately in the end, and can potentially learn new relationships not present in the original dataset (e.g. the pretrained character embeddings include the context for the character for all possible types of modern internet grammar).

Additionally, the retraining is done with a momentum-based optimizer and a linearly decaying learning rate, both of which prevent exploding gradients and makes it much less likely that the model diverges after training for a long time.

Max's open-source projects are supported by his Patreon. If you found this project helpful, any monetary contributions to the Patreon are appreciated and will be put to good creative use.

Andrej Karpathy for the original proposal of the char-rnn via the blog post The Unreasonable Effectiveness of Recurrent Neural Networks.