This program generates an FM modulation, with RDS (Radio Data System) data generated in real time. It can include monophonic or stereophonic audio.

PiFmAdv modulates the PLLC instead of the clock divider for better signal purity, which means that the signal is also less noisy. This has a great impact on stereo as it's reception is way better.

It is based on the FM transmitter created by Oliver Mattos and Oskar Weigl, and later adapted to using DMA by Richard Hirst. Christophe Jacquet adapted it and added the RDS data generator and modulator. The transmitter uses the Raspberry Pi's PWM generator to produce VHF signals.

PiFmAdv has been developed for experimentation only. It is not a media center, it is not intended to broadcast music to your stereo system. See the legal warning.

How to use it?

PiFmAdv also depends on the Linux rpi-mailbox driver, so you need a recent Linux kernel. The Raspbian releases from August 2015 have this.

Important. The binaries compiled for the Raspberry Pi 1 are not compatible with the Raspberry Pi 2/3, and conversely. Always re-compile when switching models, so do not skip the make clean step in the instructions below!

Clone the source repository and run make in the src directory:

Then you can just run:

This will generate an FM transmission on 87.6 MHz, with default station name (PS), radiotext (RT) and PI-code, without audio. The radiofrequency signal is emitted on GPIO 4 (pin 7 on header P1).

You can add monophonic or stereophonic audio by referencing an audio file as follows:

To test stereophonic audio, you can try the file stereo_44100.wav provided.

The more general syntax for running Pi-FM-RDS is as follows:

All arguments are optional:

By default the PS changes back and forth between PiFmAdv and a sequence number, starting at 00000000. The PS changes around one time per second.

Clock calibration (only if experiencing difficulties)

The RDS standards states that the error for the 57 kHz subcarrier must be less than ± 6 Hz, i.e. less than 105 ppm (parts per million). The Raspberry Pi's oscillator error may be above this figure. That is where the --ppm parameter comes into play: you specify your Pi's error and PiFmAdv adjusts the clock dividers accordingly.

In practice, I found that PiFmAdv works okay even without using the --ppm parameter. I suppose the receivers are more tolerant than stated in the RDS spec.

If you use the argument --audio -, PiFmAdv reads audio data on standard input. This allows you to pipe the output of a program into PiFmAdv. For instance, this can be used to read MP3 files using Sox:

Or to pipe the AUX input of a sound card into PiFmAdv:

You can control PS, RT, TA (Traffic Announcement flag) and PTY (Program Type) at run-time using a named pipe (FIFO). For this run PiFmAdv with the --ctl argument.

Then you can send “commands” to change PS, RT, TA and PTY:

Every line must start with either PS, RT, TA or PTY, followed by one space character, and the desired value. Any other line format is silently ignored. TA ON switches the Traffic Announcement flag to on, any other value switches it to off.

PiFmAdv is an experimental program, designed only for experimentation. It is in no way intended to become a personal media center or a tool to operate a radio station, or even broadcast sound to one's own stereo system.

In most countries, transmitting radio waves without a state-issued licence specific to the transmission modalities (frequency, power, bandwidth, etc.) is illegal.

Therefore, always connect a shielded transmission line from the Raspberry Pi directly to a radio receiver, so as not to emit radio waves. Never use an antenna.

Even if you are a licensed amateur radio operator, using PiFmAdv to transmit radio waves on ham frequencies without any filtering between the RaspberryPi and an antenna is most probably illegal because the square-wave carrier is very rich in harmonics, so the bandwidth requirements are likely not met.

I could not be held liable for any misuse of your own Raspberry Pi. Any experiment is made under your own responsibility.

PiFmAdv was successfully tested with all my RDS-able devices, namely:

Reception works perfectly with all the devices above. RDS Surveyor reports no group errors. 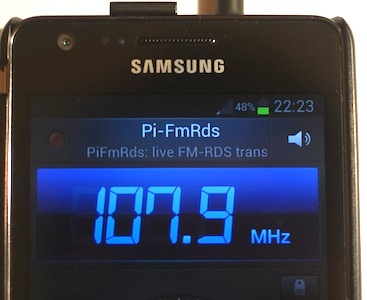 CPU usage is as follows:

CPU usage increases dramatically when adding audio because the program has to upsample the (unspecified) sample rate of the input audio file to 228 kHz, its internal operating sample rate. Doing so, it has to apply an FIR filter, which is costly.

The RDS data generator lies in the rds.c file.

To get samples of RDS data, call get_rds_samples. It calls get_rds_group, differentially encodes the signal and generates a shaped biphase symbol. Successive biphase symbols overlap: the samples are added so that the result is equivalent to applying the shaping filter (a root-raised-cosine (RRC) filter specified in the RDS standard) to a sequence of Manchester-encoded pulses.

The shaped biphase symbol is generated once and for all by a Python program called generate_waveforms.py that uses Pydemod, one of my other software radio projects. This Python program generates an array called waveform_biphase that results from the application of the RRC filter to a positive-negative impulse pair. Note that the output of generate_waveforms.py, two files named waveforms.c and waveforms.h, are included in the Git repository, so you don't need to run the Python script yourself to compile PiFmAdv.

The FM multiplex signal (baseband signal) is generated by fm_mpx.c. This file handles the upsampling of the input audio file to 228 kHz, and the generation of the multiplex: unmodulated left+right signal (limited to 15 kHz), possibly the stereo pilot at 19 kHz, possibly the left-right signal, amplitude-modulated on 38 kHz (suppressed carrier) and RDS signal from rds.c. Upsampling is performed using a zero-order hold followed by an FIR low-pass filter of order 60. The filter is a sampled sinc windowed by a Hamming window. The filter coefficients are generated at startup so that the filter cuts frequencies above the minimum of:

The samples are played by pi_fm_adv.c that is adapted from Richard Hirst's PiFmDma. The program was changed to support a sample rate of precisely 228 kHz.