This is a preview release of TubeSync, it may contain bugs but should be usable

TubeSync is a PVR (personal video recorder) for YouTube. Or, like Sonarr but for YouTube (with a built-in download client). It is designed to synchronize channels and playlists from YouTube to local directories and update your media server once media is downloaded.

If you want to watch YouTube videos in particular quality or settings from your local media server, then TubeSync is for you. Internally, TubeSync is a web interface wrapper on yt-dlp and ffmpeg with a task scheduler.

There are several other web interfaces to YouTube and yt-dlp all with varying features and implementations. TubeSync's largest difference is full PVR experience of updating media servers and better selection of media formats. Additionally, to be as hands-free as possible, TubeSync has gradual retrying of failures with back-off timers so media which fails to download will be retried for an extended period making it, hopefully, quite reliable. 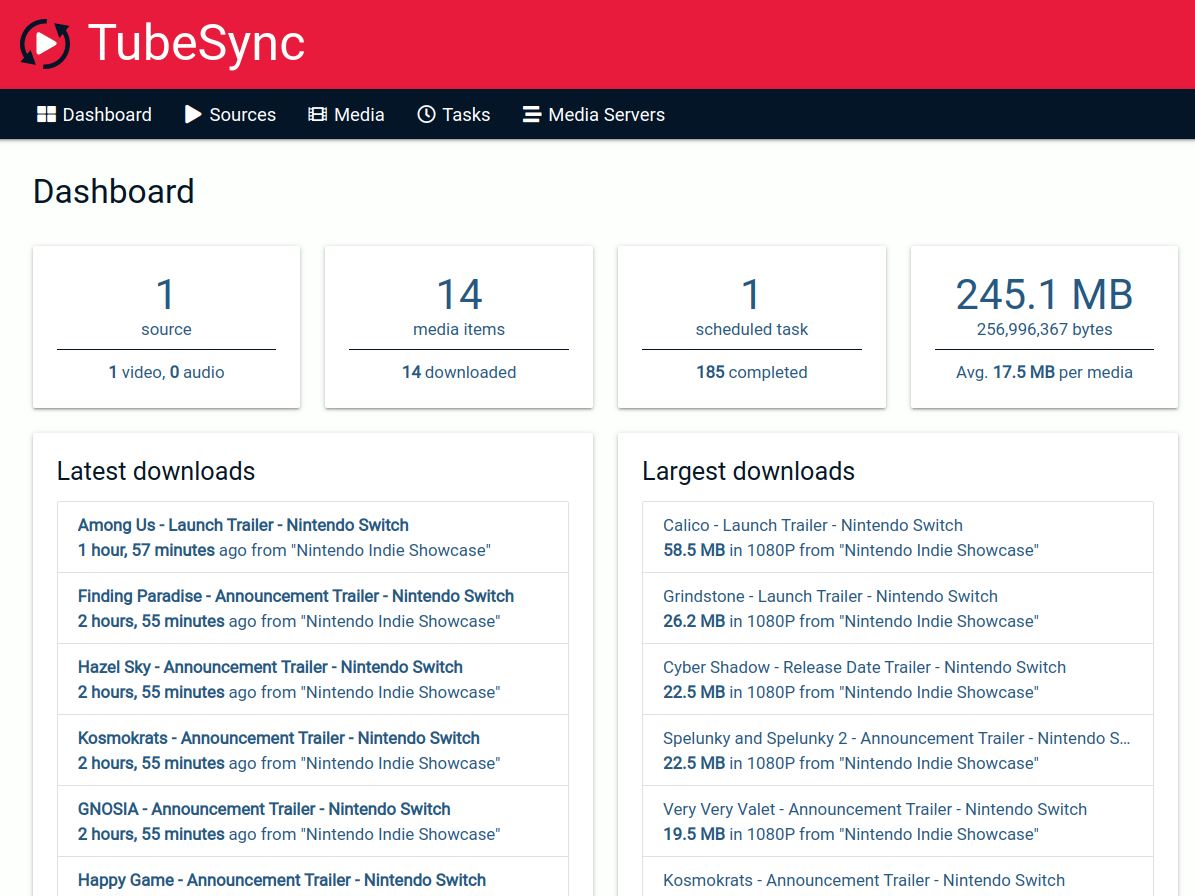 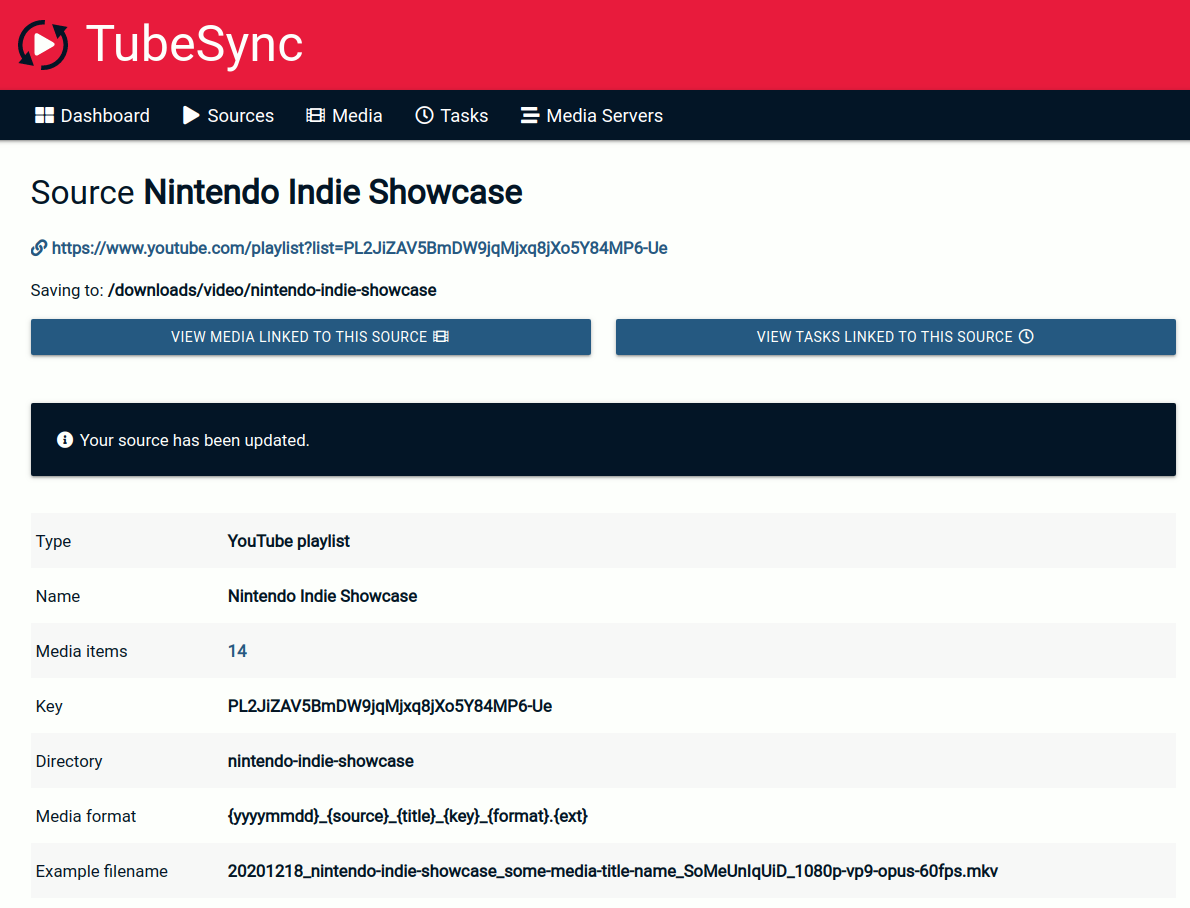 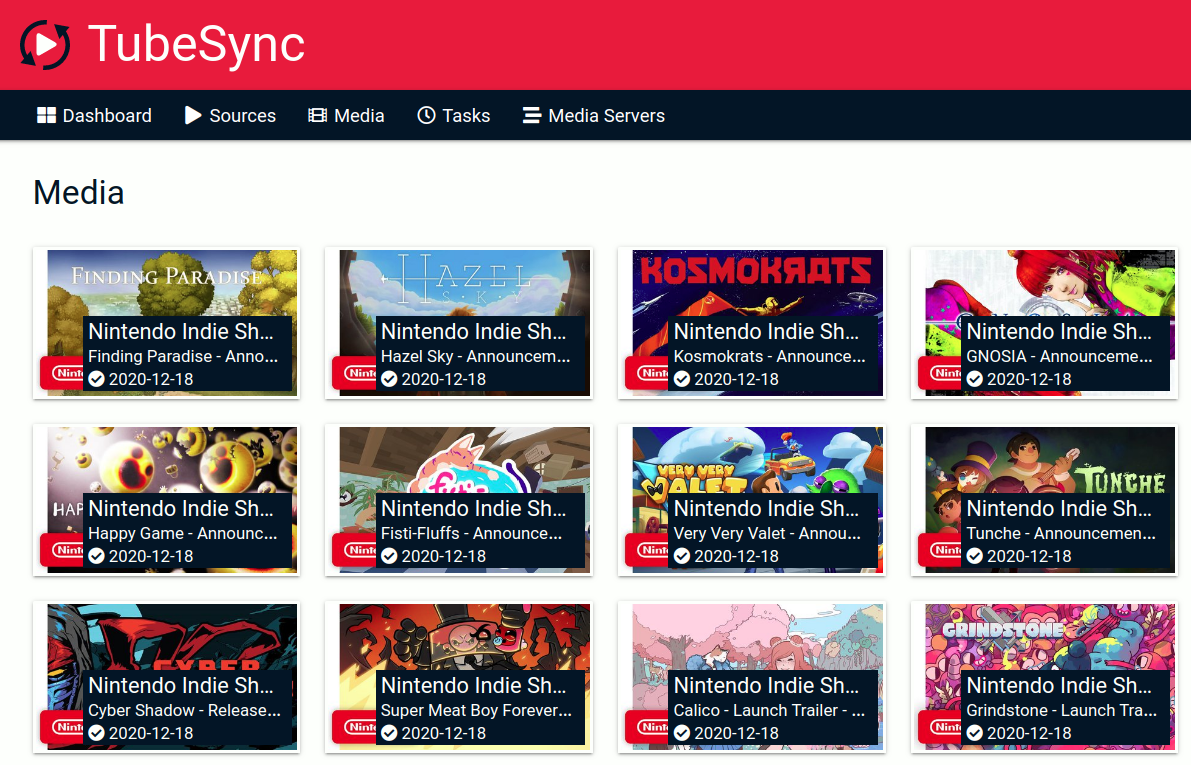 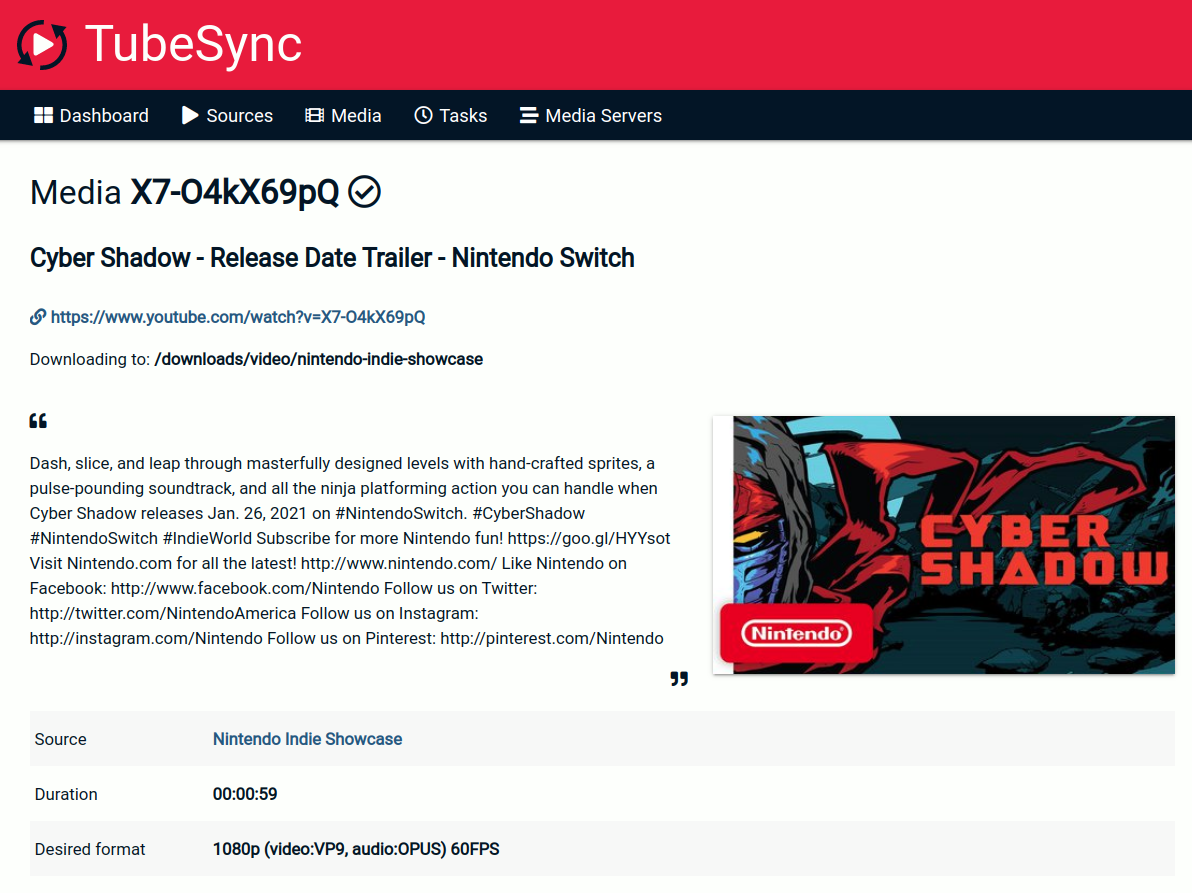 For the easiest installation, you will need an environment to run containers such as Docker or Podman. You will also need as much space as you want to allocate to downloaded media and thumbnails. If you download a lot of media at high resolutions this can be very large.

Once running, TubeSync will download media to a specified directory. Inside this directory will be a video and audio subdirectories. All media which only has an audio stream (such as music) will download to the audio directory. All media with a video stream will be downloaded to the video directory. All administration of TubeSync is performed via a web interface. You can optionally add a media server, currently just Plex, to complete the PVR experience.

TubeSync is designed to be run in a container, such as via Docker or Podman. It also works in a Docker Compose stack. amd64 (most desktop PCs and servers) and arm64 (modern ARM computers, such as the Rasperry Pi 3 or later) are supported.

Example (with Docker on *nix):

You can find your local timezone name here:

If unset, TZ defaults to UTC.

Next, create the directories you're going to use for config data and downloads:

Once running, open http://localhost:4848 in your browser and you should see the TubeSync dashboard. If you do, you can proceed to adding some sources (YouTube channels and playlists). If not, check docker logs tubesync to see what errors might be occuring, typical ones are file permission issues.

Alternatively, for Docker Compose, you can use something like:

Available in v1.0 (or :latest)and later. If you want to enable a basic username and password to be required to access the TubeSync dashboard you can set them with the following environment variables:

For example in the docker run ... line add in:

Or in your Docker Compose file you would add in:

When BOTH HTTP_USER and HTTP_PASS are set then basic HTTP authentication will be enabled.

To update, you can just pull a new version of the container image as they are released.

Back-end updates such as database migrations should be automatic.

TubeSync, when running in its default container, stores thumbnails, cache and its SQLite database into the /config directory and wherever you've mapped that to on your file system. Just copying or moving this directory and making sure the permissions are correct is sufficient to move, back up or migrate your TubeSync install.

You will then be presented with the initial add a source form where you can select all the features you want, such as how often you want to index your source and the quality of the media you want to download. Once happy, click "add source".

That's about it. All other actions are automatic and performed on timers by scheduled tasks. You can see what your TubeSync instance is doing on the "tasks" tab.

As media is indexed and downloaded it will appear in the "media" tab.

Currently TubeSync supports Plex as a media server. You can add your local Plex server under the "media servers" tab.

TubeSync outputs useful logs, errors and debugging information to the console. You can view these with:

Once you're happy using TubeSync there are some advanced usage guides for more complex and less common features:

It's a good idea to add sources with as long of an index frequency as possible. This is the duration between indexes of the source. An index is when TubeSync checks to see what videos available on a channel or playlist to find new media. Try and keep this as long as possible, up to 24 hours.

If you add a massive (several thousand videos) channel to TubeSync and choose "index every hour" or similar short interval it's entirely possible your TubeSync install may spend its entire time just indexing the massive channel over and over again without downloading any media. Check your tasks for the status of your TubeSync install.

If you add a significant amount of "work" due to adding many large channels you may need to increase the number of background workers by setting the TUBESYNC_WORKERS environment variable. Try around ~4 at most, although the absolute maximum allowed is 8.

Be nice. it's likely entirely possible your IP address could get throttled by the source if you try and crawl extremely large amounts very quickly. Try and be polite with the smallest amount of indexing and concurrent downloads possible for your needs.

No, TubeSync is designed to repeatedly scan and download new media from channels or playlists. If you want to download single videos the best suggestion would be to create your own playlist, add the playlist to TubeSync and then add single videos to your playlist as you browse about YouTube. Your "favourites" playlist of videos will download automatically.

Does TubeSync support any other video platforms?

At the moment, no. This is a pre-release. The library TubeSync uses that does most of the downloading work, yt-dlp, supports many hundreds of video sources so it's likely more will be added to TubeSync if there is demand for it.

Is there a progress bar?

No, in fact, there is no JavaScript at all in the web interface at the moment. TubeSync is designed to be more set-and-forget than something you watch download. You can see what active tasks are being run in the "tasks" tab and if you want to see exactly what your install is doing check the container logs.

No, this feature is best served by existing services such as the execelent Tautulli which can monitor your Plex server and send alerts that way.

There's errors in my "tasks" tab!

You only really need to worry about these if there is a permanent failure. Some errors are temproary and will be retried for you automatically, such as a download got interrupted and will be tried again later. Sources with permanet errors (such as no media available because you got a channel name wrong) will be shown as errors on the "sources" tab.

What is TubeSync written in?

Python3 using Django, embedding yt-dlp. It's pretty much glue between other much larger libraries.

Can I get access to the full Django admin?

Yes, although pretty much all operations are available through the front end interface and you can probably break things by playing in the admin. If you still want to access it you can run:

And follow the instructions to create an initial Django superuser, once created, you can log in at http://localhost:4848/admin

Are there user accounts or multi-user support?

There is support for basic HTTP authentication by setting the HTTP_USER and HTTP_PASS environment variables. There is not support for multi-user or user management.

No, you should deploy it behind an HTTPS-capable proxy if you want this (nginx, caddy, etc.). Configuration of this is beyond the scope of this README.

What architectures does the container support?

Just amd64 for the moment. Others may be made available if there is demand.

There are a number of other environment variables you can set. These are, mostly, NOT required to be set in the default container installation, they are really only useful if you are manually installing TubeSync in some other environment. These are:

As a relatively normal Django app you can run TubeSync without the container. Beyond following this rough guide you are on your own and should be knowledgeable about installing and running WSGI-based Python web applications before attempting this.

There is a moderately comprehensive test suite focussing on the custom media format matching logic and that the front-end interface works. You can run it via Django:

All properly formatted and sensible pull requests, issues and comments are welcome.

Spotify Downloader ⭐ 8,984
Download your Spotify playlists and songs along with album art and metadata (from YouTube if a match is found).
dependent packages 2total releases 61most recent commit 5 days ago