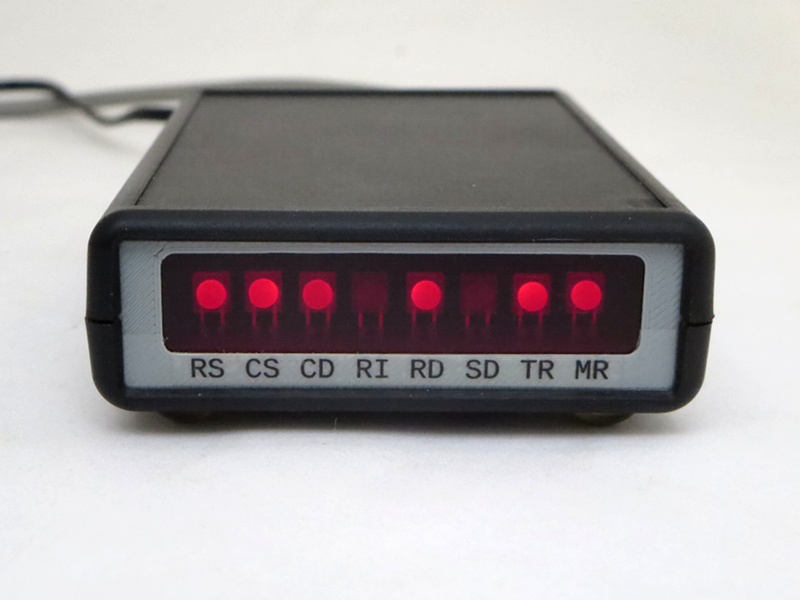 This project grew out of a desire to get an old Ampro LB+/Z80 hooked up to the Internet.

Right from the start, I knew I wanted a row of LED indicators at the front of the modem so that it would be reminiscent of an old Hayes Smartmodem. (I briefly considered finding an old Smartmodem on eBay, but soon remembered that the case had in fact been made of metal; they don't build 'em like that anymore.)

Since the modem was going to be hooked up to the Little Board's serial port, I needed an actual RS-232 level serial port, with either a DB-25 or DE-9 connector.

And finally, since I wanted the Hayes style LEDs, I thought it would be handy to have the Hayes AT commands too, at least as close as I could manage.

That was all I started with. I couldn't tell you how I stumbled across the whole WiFi modem thing; I can't even remember what terms I searched with but very quickly I came across the message thread at WiFi232's Evil Clone. Inspired by that, and Paul Rickards' WiFi232, and Daniel Jameson's ESP8266 based virtual modem I got started.

I had a preliminary version put together and working by the first evening. Then the wholesale changes to the software began. And for the longest time, it looked like they'd never end. Eventually though, they calmed down and "wholesale changes" downshifted to "another tweak I'd like to make."

The hardware didn't change nearly as much from beginning to end. I did the development on a Wemos D1 R1 and a little half length solderless breadboard mounted together. The plan for the final hardware was always to use a Wemos D1 mini. A MAX3232 took care of the 3.3V <-> RS-232 level shifting, and a 74HCT245 was used to drive the indicator LEDs. 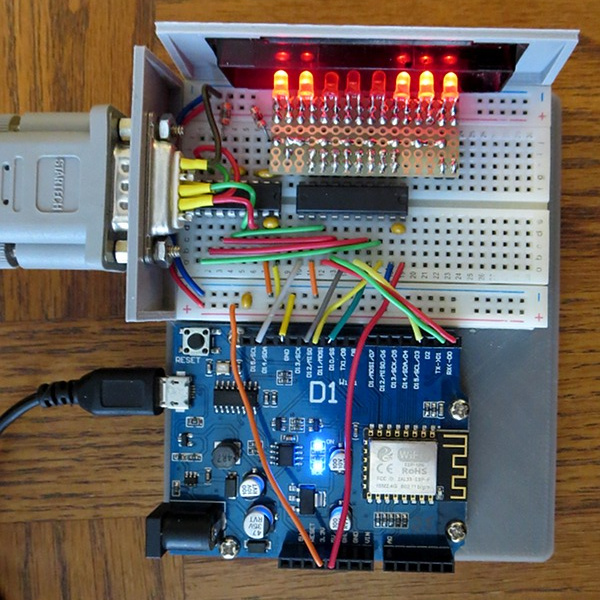 The only major addition to the hardware during development was an OR gate on the serial output from the ESP8266. On startup, the ESP8266 sends out some debug information (at an oddball baud rate) through the serial port. It shows up as garbage characters to whatever's hooked up to the serial port. It annoyed me enough that I fed the Tx signal through the OR gate, with the other input hooked up to an output pin that I could count on remaining high (thereby masking off the Tx signal) until after the sketch had started and set it low. 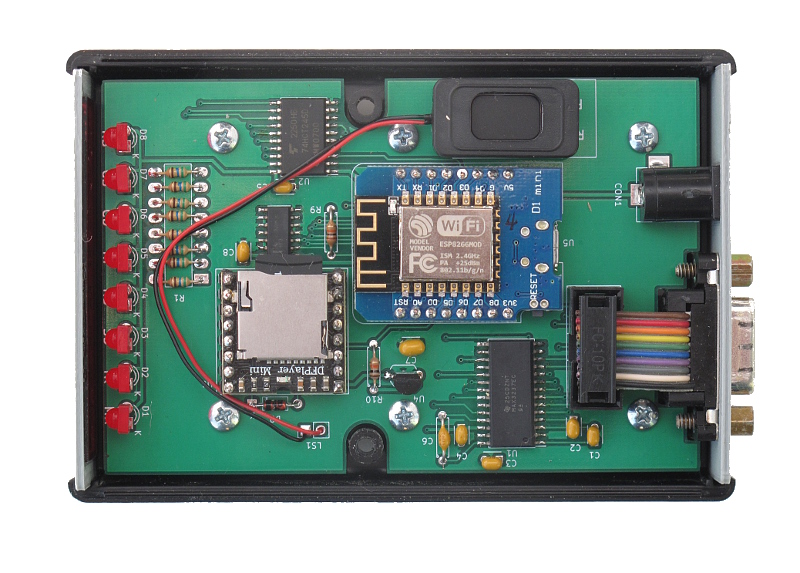 I made the decision to use through hole components throughout; retro components for a retro modem. Besides, I already had most of them in my parts box!

In keeping with the retro theme, the modem uses classic Hayes style blinking LEDs and a DE-9F for the RS-232 connector. Everything is displayed: RTS, CTS, DSR, DTR, DCD, RI, TxD and RxD. However, only RxD, TxD, RTS and CTS are actually brought out on the DE-9F connector. The Ampro LB only brought those four signals out so it would have been overkill for the modem I was designing for it to support anything more. Additionally, it would have required another three MAX3232 ICs to do it (had the MAX3237 been available in DIP, I might have had a harder time saying no...).

The PCB is laid out for a Wemos D1 mini and the software expects to see just that. If you're just using the software and not the PCB, there's no reason you couldn't use another kind of ESP8266 board; I used a D1 R1 myself when I was developing the modem. You'd just need to add pin definitions for your board in RetroWiFiModem.h.

A separate 3.3V regulator is used to power the MAX3232 IC and 74HC32 quad OR gate. Some (most?) D1 mini clones have the smallest 3.3V regulator on board that they can get away with to power the board, and they don't have a lot of mA's left over to power anything else. Better safe than sorry. 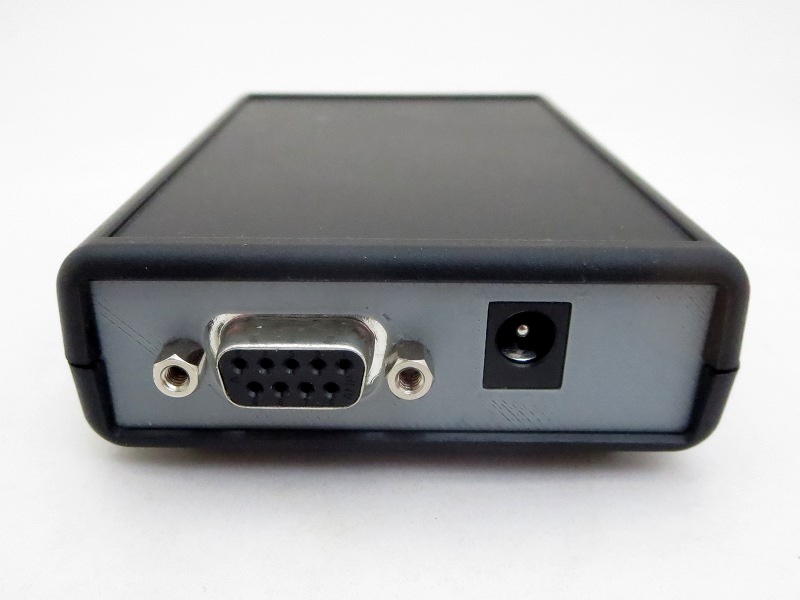 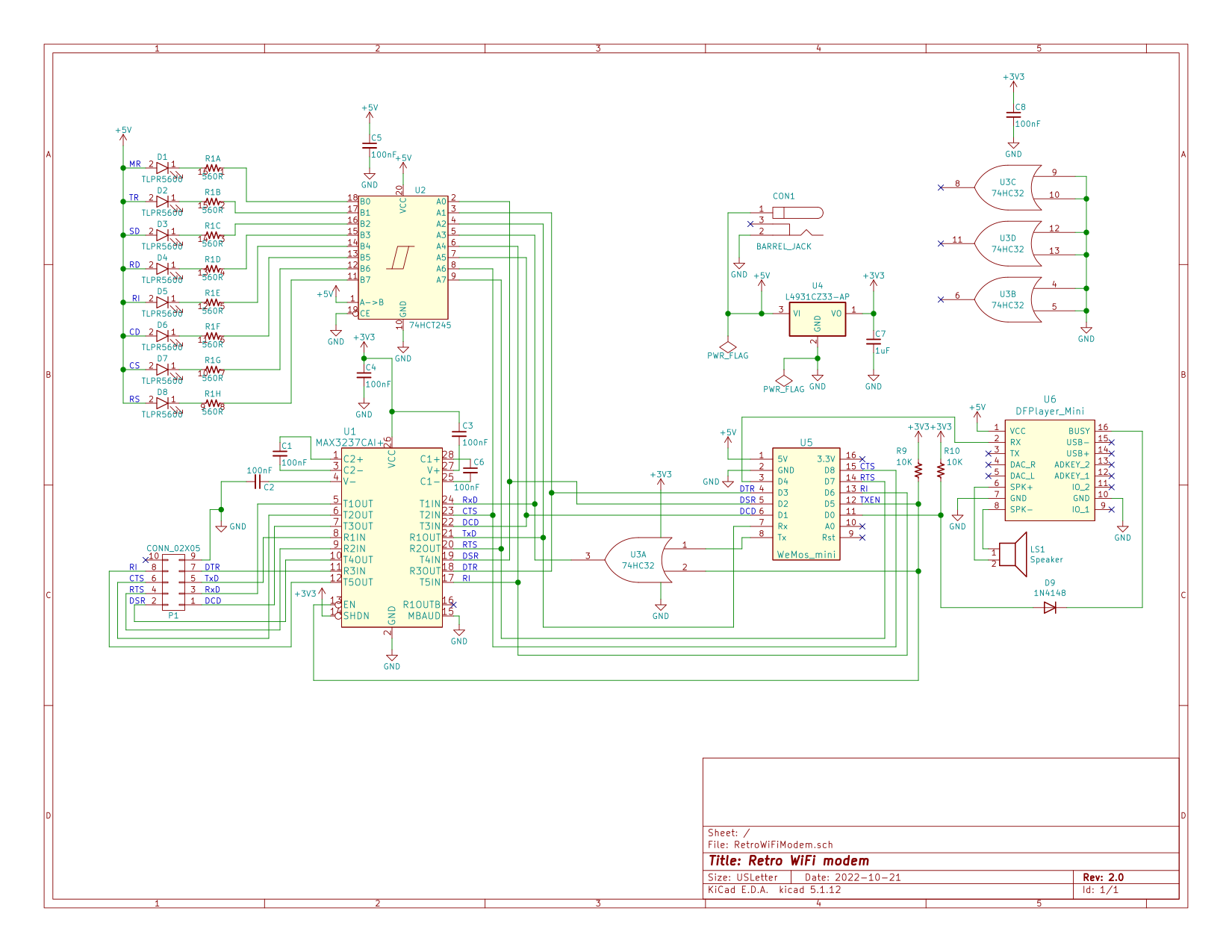 On the off chance that there's someone else out there with a well stocked parts box and a burning desire to put together their own WiFi modem, there's a BOM in the kicad sub directory. If you actually had to go out and buy all the parts, it really wouldn't be cost effective.

Then again, how practical is getting an Ampro Little Board on the Internet? Practicality isn't always everything. Sometimes nostalgia is worth the effort.

I have to admit that I semi-seriously considered adding one of those little audio playback modules for faux dialing and connection sounds. It would have been in keeping with the whole retro theme. But in the end I decided not to. Maybe next time.

Like I said at the start, I would have loved to have used an old Hayes Smartmodem case, but they were metal and wouldn't have allowed the WiFi to work particularly well.

The PCB includes cutouts for the two columns that join the case together, and mounting holes for the 6 standoffs. Also, there's an oddly shaped cutout in back end to allow a particular IDC DE-9F I had on hand. It's available from DigiKey (or a very close clone is) but it's fairly pricey. But there's plenty of room for an ordinary solder cup DE-9F. You'd most likely want to omit the 10 pin header and just wire the DE-9F right to the board.

You might notice that the vias are unusually large by today's standards. The reason for that is to allow the option of constructing the PCB as a single sided board, replacing the top layer of copper with 11 jumpers.

In a nod to its popularity, the command set I used largely follows that used in Paul Rickards' WiFi232 modem. Even if the innards are completely different, it made sense to make it work like what people were already used to. There's a reason everyone's been copying the Hayes command set for almost 40 years!

Here's the commands you need to set up the modem to automatically connect to your WiFi network:

Once you've done that, the modem will automatically connect to your WiFi network on power up and will be ready to "dial up" a connection with ATDT.

Multiple AT commands can be typed in on a single line. Spaces between commands are allowed, but not within commands (i.e. AT S0=1 X1 Q0 is fine; ATS 0= 1 is not). Commands that take a string as an argument (e.g. AT$SSID=, AT$TTY=) assume that everything that follows is a part of the string, so no commands are allowed after them.

While I liked the idea of being able to update the software OTA, it seemed to make more sense in my situation to be able to push a new version as I built it rather than have the modem pull it. So that's what I did. It uses the default OTA upload capability built into the Arduino IDE.

Jan 24/22: It's been reported that the ESP8266 core is slightly snafu'd at the moment, and that it's breaking things in the modem software. As a workaround, I've added the bin file that gets uploaded to the modem in the repository. I haven't updated my ESP8266 core in ages; "if it isn't broken, don't break it", and everything still works for me. The bin file can be uploaded with the espota.py tool in the ESP8266 tool directory tree.

(If TPTB have deleted/renamed/moved that tool in the current core, you'll have to figure out how to do a manual OTA update.)

Something I noticed with ESP8266 software that puzzled me was the number of places I saw a series of Serial print statements being broken up with calls to yield(), like so:

It didn't take long to figure out what was going on; The print() call was blocking, and at lower baud rates, even printing a few relatively short strings was enough to cause the watchdog to bark and cause a reset. So the repetitive yield() calls were an attempt to feed the watchdog often enough to keep it from barking.

What does this have to do with RTS/CTS handshaking? Simply put, lowering RTS for more than a few seconds was causing the watchdog to bark as well. So I started digging.

In cores/esp8266/uart.cpp I found the following function:

This is the low level function that everything calls to send a character out the serial port. The cause of the watchdog barking is in the dead spin while loop. It waits until there's room in the transmit FIFO to add another character. So if RTS/CTS handshaking is enabled, and RTS is low for longer than the watchdog likes: woof.

What I did to quiet the watchdog down both when sending long strings at low baud rates and during long waits for RTS to come active again was to add a yield() call to the dead spin while loop, like so:

This way, no matter how long the code has to wait for space in the transmit FIFO, the watchdog is kept well fed and quiet.

Is a personal project like this ever really finished? I've had two units assembled and in use since the spring of 2020, and while there's been some software changes since then, I really don't expect any more. There are no outstanding bugs that I'm aware of, and no new features on my wish list. For the time being at least, I think it's complete.

Have you used the modem to 'dial' into a Linux box? And have you done a sz binary_file on the Linux box? And at a completely reproducible point in the file, has the connection dropped? But other binary files work just fine? Then read on.

This drove me slightly batty for months. I finally narrowed it down to trying to send blocks of binary data with a large number of FF bytes. I eventually created a test file consisting of 2K of FF and used that to test with. I could download it through the modem with Xmodem just fine. Ymodem also worked if I kept the block size down to 128 bytes - but the connection would drop instantly if I tried sending 1K blocks. Same thing with Zmodem.

In fact, if I just tried cat binary_file, the connection would drop. Which eventually got me thinking. Sitting at the console on my main Linux box, I telnet'd to the same box and logged in. No WiFi modem involved anywhere, just a telnet session on the console to the same box. I then did a cat binary_file. The telnet connection dropped, and I was back in my original session.

It's the Linux telnet daemon. Not the modem at all.

To prove it to myself, I hooked up WiFi modems to two systems on their serial ports and had one dial into the other. I could send the all FF binary file back and forth with Zmodem and Ymodem, no trouble at all.

But you really, really need to download that binary file through the modem from a telnet connection to a Linux box? You're not going to be able to use Zmodem. Ymodem will work (the sy command defaults to 128 byte blocks), as will Xmodem. But not Zmodem.

Oddly enough, the telnet daemon has no trouble receiving the all FF binary file. Only sending it. Your guess as to why is probably better than mine.