What is Rigel Engine?

This project is a re-implementation of the game Duke Nukem II, originally released by Apogee Software in 1993 for MS-DOS. RigelEngine works as a drop-in replacement for the original executable: It reads the game's data files and plays just like the original, but runs natively on modern operating systems and is written in modern C++ code with a completely new architecture under the hood. On top of that, it offers various modern enhancements like better game controller support, a wide-screen mode, quick saving etc.

There was never any source code released for the original game, so this project is based on reverse engineering. Disassembly from the original executable served as basis for writing new code from scratch, while video captures from DosBox were used for frame-by-frame verification. See my blog post to learn more about the process.

Try the web version! (compiled to wasm via Emscripten) 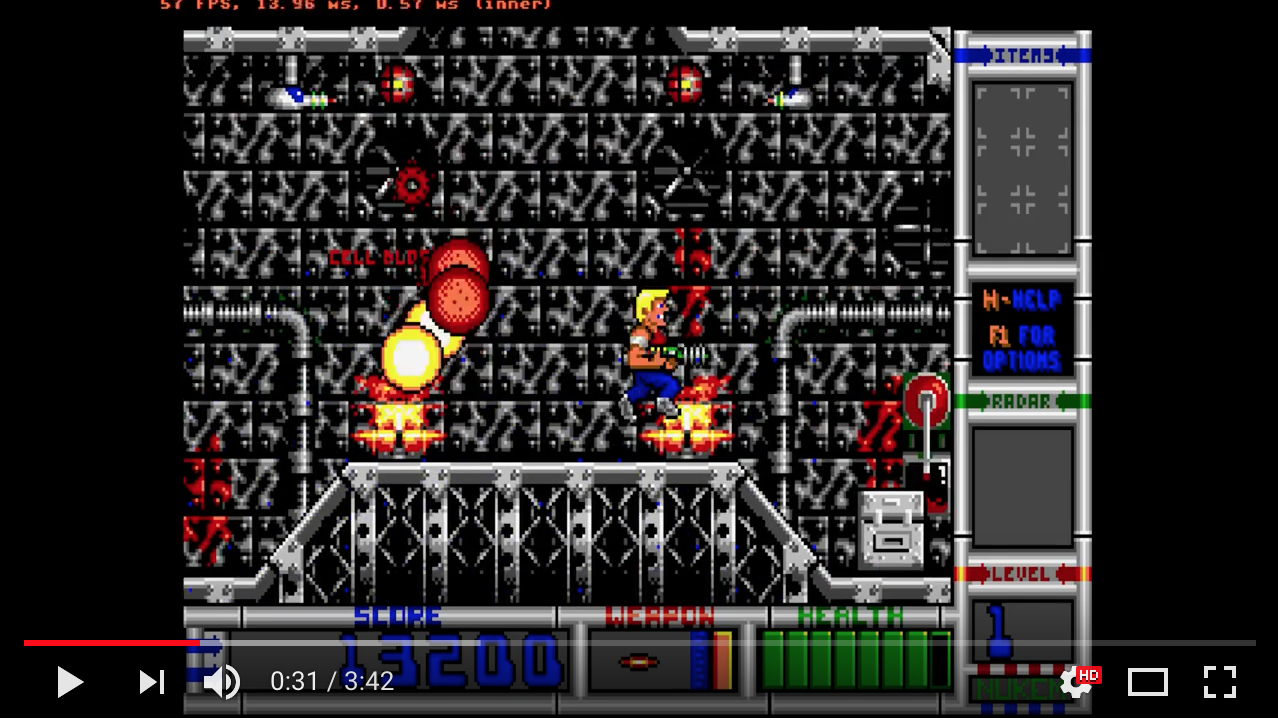 Gameplay-wise, RigelEngine is feature-complete: All four episodes of the game (shareware and registered version) are fully playable and on par with the original game.

The project overall is far from finished, though. There are still some pieces missing to reach full parity with the original game (a few visual effects, demo playback). On top of that, more modern enhancements and usability improvements are planned.

Android and iOS versions might happen someday, but there are no concrete plans at the moment.

RigelEngine is not very demanding, but it does require OpenGL-capable graphics hardware. Either OpenGL 3.0 or OpenGL ES 2.0 can be used, depending on what's chosen at compile time. To build in GL ES mode, pass -DUSE_GL_ES=ON to CMake.

Any Nvidia or AMD graphics card from 2007 or later should run the game without problems. Intel integrated GPUs only added OpenGL 3 support in 2011, however. On Linux, using GL ES can still be an option for older Intel GPUs.

Contributions to RigelEngine are very welcome! Please have a look at the contribution guide before making a PR.

There is a growing body of documentation on the Wiki, to help with getting into the code base. A good place to start is Architecture Overview

If you are looking for some easy tasks to get started, take a look at issues labeled good first issue.

In order to run RigelEngine, the game data from the original game is required. Both the shareware version and the registered version work. When launching RigelEngine for the first time, it will show a file browser UI and ask you to select the location of your Duke Nukem II installation. The chosen path will be stored in the game's user profile, so that you don't have to select it again next time.

It's also possible to pass the path to the game files as argument on the command line, which can be handy during development.

The full version of the game (aka registered version) is not available currently, but you can still download the freely available shareware version, e.g. from archive.org.

If you already have a copy of the game, you can also point RigelEngine to that existing installation.

The only files actually required for RigelEngine are:

Currently, the game will abort if the intro movies are missing, but they aren't mandatory for gameplay, and I'm planning to make them optional in the future.

If there are existing saved games, high score lists, or settings found in the game files, RigelEngine imports them into its own user profile when running for the first time.

You can find more info that didn't quite fit in this README over on the Wiki. For example, you'll find info on how to activate the built-in debugging tools, a list of bugs in the original version that have been fixed in Rigel Engine, etc.

Pre-built binaries for Windows 64-bit are provided with each Release. You can also grab a build of the latest master branch by going to AppVeyor, clicking on "Configuration: Release", and then clicking on "Artifacts".

Thanks to @mnhauke, there is now also a Linux package for OpenSUSE Tumbleweed.

I'm planning to provide binaries for OS X, Ubuntu/Debian, and Raspberry Pi in the future, but right now, you need to build the project yourself on these platforms.

See BUILDING.md for detailed instructions for each platform.