VimTeX is a modern Vim and Neovim filetype and syntax plugin for LaTeX files.

VimTeX requires Vim version 8.0.1453 or Neovim version 0.4.3. The requirements were updated in July 2020 after the release of VimTeX 1.0. If you are stuck on older versions of Vim or Neovim, then you should not use the most recent version of VimTeX, but instead remain at the v1.0 tag.

Some features require external tools. For example, the default compiler backend relies on latexmk. Users are encouraged to read the requirements section in the documentation (:h vimtex-requirements).

If you use vim-plug or packer.nvim, then add one of the following lines to your vimrc file, correspondingly:

Or use some other plugin manager:

If you use the new package feature in Vim, please note the following:

After installing VimTeX, you should edit your .vimrc file or init.vim file to configure VimTeX to your liking. Users should read the documentation to learn the various configuration possibilities, but the below is a simple overview of some of the main aspects.

The following video shows how to use VimTeX's main features (credits: @DustyTopology from #1946). The example LaTeX file used in the video is available under test/example-quick-start/main.tex and it may be instructive to copy the file and play with it to learn some of these basic functions.

Both new and experienced users are also encouraged to read the third-party article Getting started with the VimTeX plugin. The article covers VimTeX's core features and contains plenty of examples and high-resolution animations intended to help new users ease into working with the plugin.

Users are of course strongly encouraged to read the documentation, at least the introduction, to learn about the different features and possibilities provided by VimTeX (see :h vimtex). Advanced users and potential developers may also be interested in reading the supplementary documents:

Here is an example of the syntax highlighting provided by VimTeX. The conceal feature is active on the right-hand side split. The example is made by @DustyTopology with the vim-colors-xcode colorscheme with some minor adjustments described here. 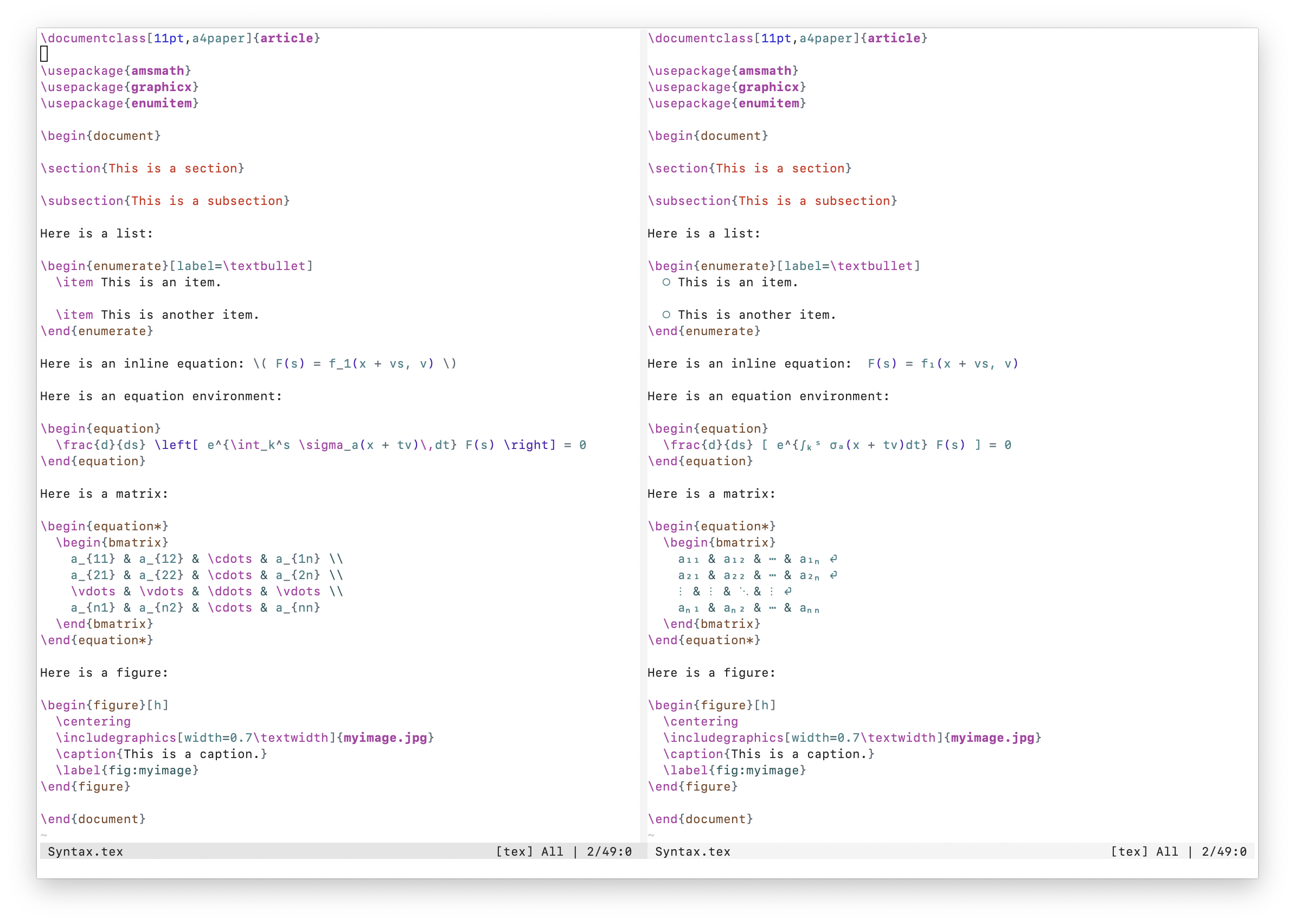 Additionally, you can find animated demonstrations of VimTeX's core motions, text-editing commands, and text objects in the file VISUALS.md.

Below is a list of features offered by VimTeX. The features are accessible as both commands and mappings. The mappings generally start with <localleader>l, but if desired one can disable default mappings to define custom mappings. Nearly all features are enabled by default, but each feature may be disabled if desired. The two exceptions are code folding and formating, which are disabled by default and must be manually enabled.

For orientation, you can watch concise demonstrations of many of the motions, text objects, and text-editing features provided by VimTeX in the file VISUALS.md.

See the documentation for a thorough introduction to VimTeX (e.g. :h vimtex).

Even though VimTeX provides a lot of nice features for working with LaTeX documents, there are several features that are better served by other, dedicated plugins. For a more detailed listing of these, please see :help vimtex-and-friends.

The following are some alternative LaTeX plugins for Vim:

For more alternatives and more information and discussions regarding LaTeX plugins for Vim, see:

VimTeX users may be interested in reading @ejmastnak's series on Efficient LaTeX Using (Neo)Vim, which covers all the fundamentals of setting up a VimTeX-based LaTeX workflow, including usage of the VimTeX plugin, compilation, setting up forward and inverse search with a PDF reader, and Vimscript tools for user-specific customization.

If you know of (or create) other up-to-date, high-quality guides to VimTeX's features on third-party websites, feel free to submit a pull request updating this section.