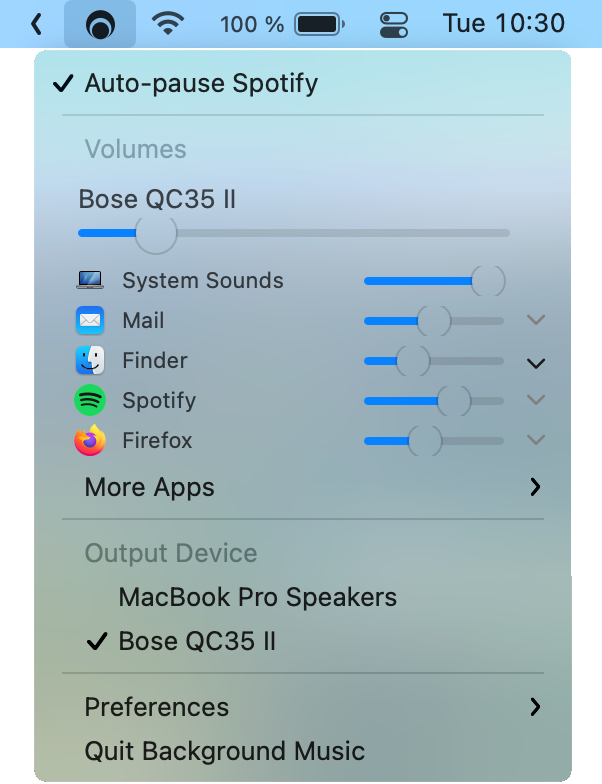 Background Music automatically pauses your music player when a second audio source is playing and unpauses the player when the second source has stopped.

Adding support for a new music player is usually straightforward.1 If you don't know how to program, or just don't feel like it, feel free to create an issue. Otherwise, see BGMMusicPlayer.h.

Background Music provides a volume slider for each application running your system. You can boost quiet applications above their maximum volume.

You can record system audio and a microphone together by creating an aggregate device that combines your input device (usually Built-in Input) with the Background Music device. You can create the aggregate device using the Audio MIDI Setup utility under /Applications/Utilities.

You can download the current version of Background Music using the following options. We also have snapshot builds.

Install using Homebrew by running the following command in Terminal:

If you want the snapshot version, run:

Background Music usually takes less than a minute to build. You need Xcode version 8 or higher.

The script restarts the system audio process (coreaudiod) at the end of the installation, so pause any applications playing audio if you can.

To uninstall Background Music from your system, follow these steps:

If you cannot locate uninstall.sh, you can download the project again.

If Background Music crashes and your audio stops working, open System Preferences > Sound and change your system's default output device to something other than the Background Music device. If it already is, then change the default device and then change it back again.

Make sure you allow "microphone access" when you first run Background Music. If you denied it, go to System Preferences > Security & Privacy > Privacy > Microphone, find Background Music in the list and check the box next to it. Background Music doesn't actually listen to your microphone. It needs the permission because it gets your system audio from its virtual input device, which macOS counts as a microphone. (We're working on it in #177.)

If the volume slider for an app isn't working, try looking in More Apps for entries like Some App (Helper). For some meeting or video chat apps, you may need to do this to change the current meeting volume.

Many other issues are listed in TODO.md and in GitHub Issues.