Minimal Linux Live (MLL) is a tiny educational Linux distribution, which is designed to be built from scratch by using a collection of automated shell scripts. Minimal Linux Live offers a core environment with just the Linux kernel, GNU C library, and Busybox userland utilities. Additional software can be included in the ISO image at build time by using a well-documented configuration file.

The generated ISO image file contains Linux kernel, GNU C library compiled with default options, Busybox compiled with default options, quite simple initramfs structure and some "overlay bundles" (the default build process provides few overlay bundles). You don't get Windows support out of the box, nor you get any fancy desktop environment (refer to the Debootstrap Live project if you need minimal system with network and UI). All you get is a simple shell console with default Busybox applets, network support via DHCP and... well, that's all. This is why it's called "minimal".

Note that by default Minimal Linux Live provides support for legacy BIOS systems. You can change the build configuration settings in the .config file and rebuild MLL with support for modern UEFI systems.

All build scripts are well organized and quite small in size. You can easily learn from the scripts, reverse engineer the build process and later modify them to include more stuff (I encourage you to do so). After you learn the basics, you will have all the necessary tools and skills to create your own fully functional Linux based operating system which you have built entirely from scratch.

The guidebook explains in details the MLL architecture and the build process. This is the recommended documentation resource if you want to have complete understanding of the MLL ecosystem.

You are encouraged to read the tutorial which explains the minimalistic MLL build process. The same tutorial, along with all MLL source code, can be found in the ISO image structure in the /minimal/rootfs/usr/src directory.

The hosting space for Minimal Linux Live is provided by the cool guys at Microweber - check them out. :)

Did I mention the YouTube channel where you can watch some of the cool Minimal Linux Live features? No? Well, now you know about it! :)

Here are some screenshots of the latest published version of Minimal Linux Live: 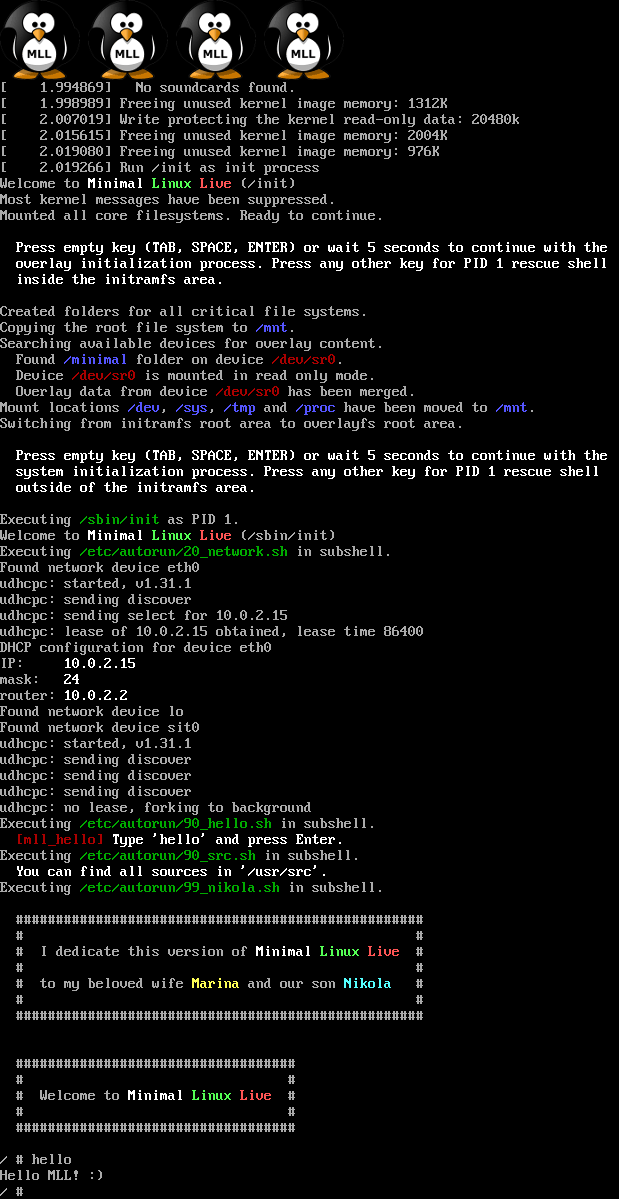 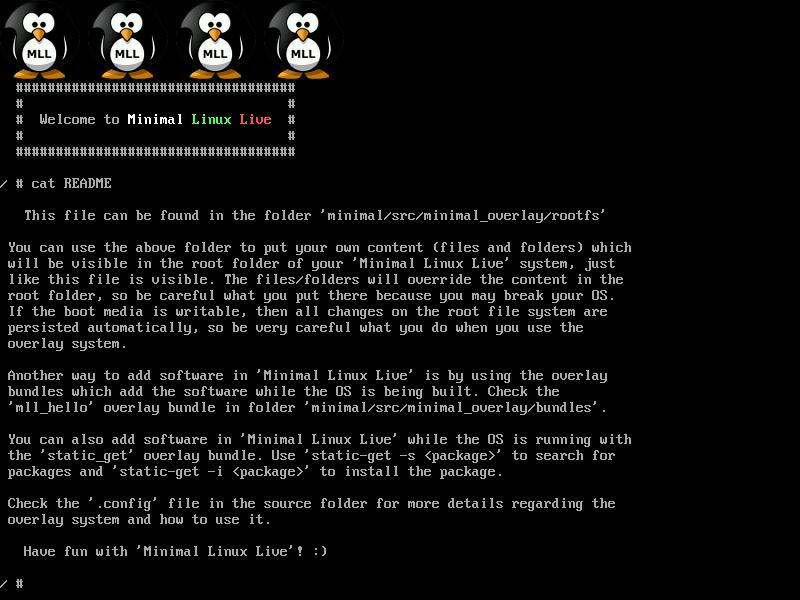 You can experiment with Minimal Linux Live directly in your browser by using JavaScript PC Emulator. Here is a screenshot: 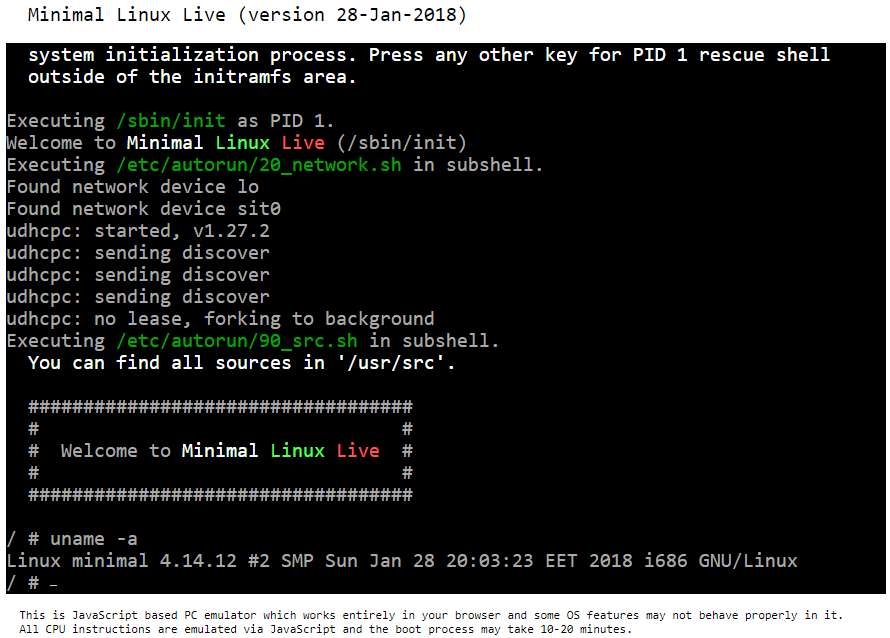 Take a look at the issues page where all future MLL improvements are tracked.

The section below is for Ubuntu and other Debian based distros.

The section below is for SUSE.

The default build process uses some custom provided CFLAGS. They can be found in the .config file. Some of these additional flags were introduced in order to fix different issues which were reported during the development phase. However, there is no guarantee that the build process will run smoothly on your system with these particular flags. If you get compilation issues (please note that I'm talking about compilation issues, not about general shell script issues), you can try to disable these flags and then start the build process again. It may turn out that on your particular host system you don't need these flags.

Important note! Most of the overlay bundles come with no support since the build process for almost all of them is host specific and can vary significantly between different machines. Some overlay bundles have no dependencies to the host machine, e.g. the bundles which provide the DHCP functionality and the MLL source code. These bundles are enabled by default.

The overlay bundle system provides dependency management. If bundle 'b' depends on bundle 'a' you don't need to build bundle 'a' manually in advance. The bundle dependencies are described in special metadata file bundle_deps and all such dependencies are prepared automatically.

Take a look at the mll_hello overlay bundle which compiles simple C program (it prints one line in the console) and installs it properly in the MLL overlay structure.

Another way to add software in MLL is at runtime by using slightly modified version of static-get which is provided as additional overlay bundle. The static_get overlay bundle is not enabled by default. You can enable it in the main .config file. Here are some examples with static-get:

The current development version of MLL partially supports GraalVM (provided as overlay bundle). Note that GraalVM has runtime dependencies on GCC and Bash and therefore some GraalVM feature are not supported in MLL, e.g. the gu updater and almost all GVM language wrapper scripts, including the R wrappers. Nevertheless, the core GVM features work fine. Java, Python, Ruby, Node and JavaScript work in MLL/GraalVM environment. Great, isn't it! :) 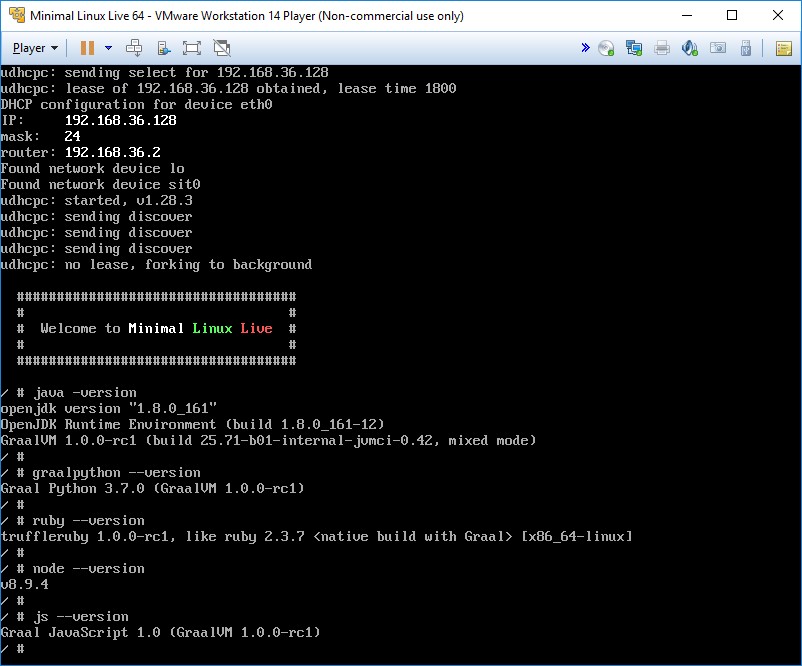 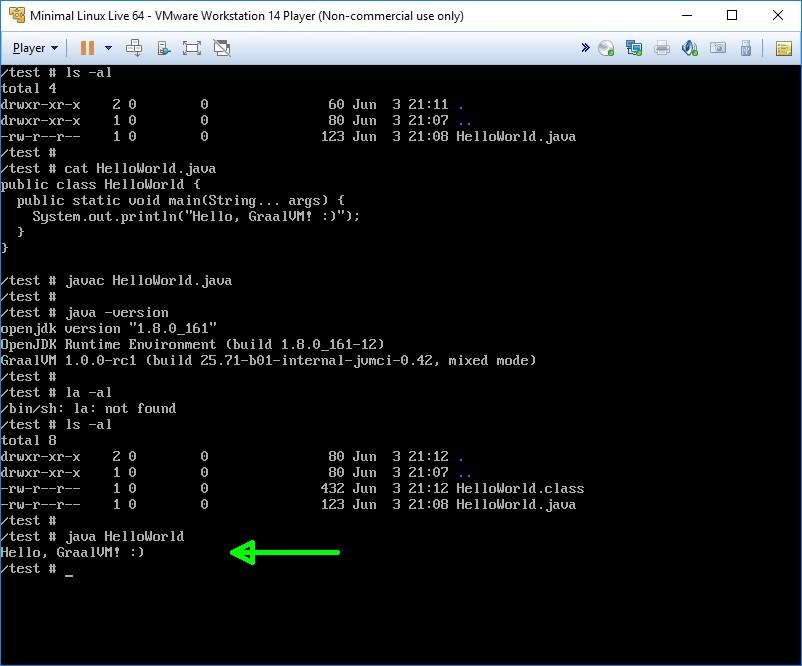 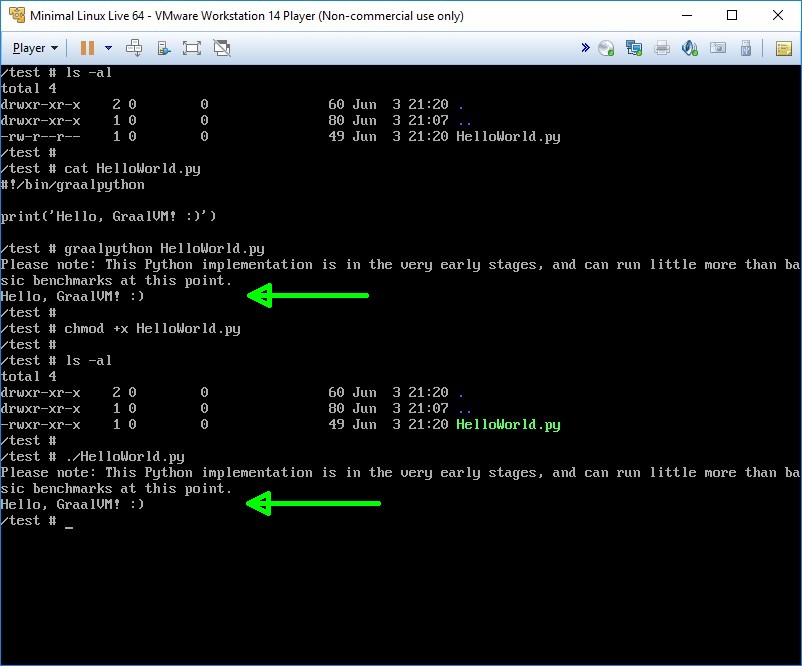 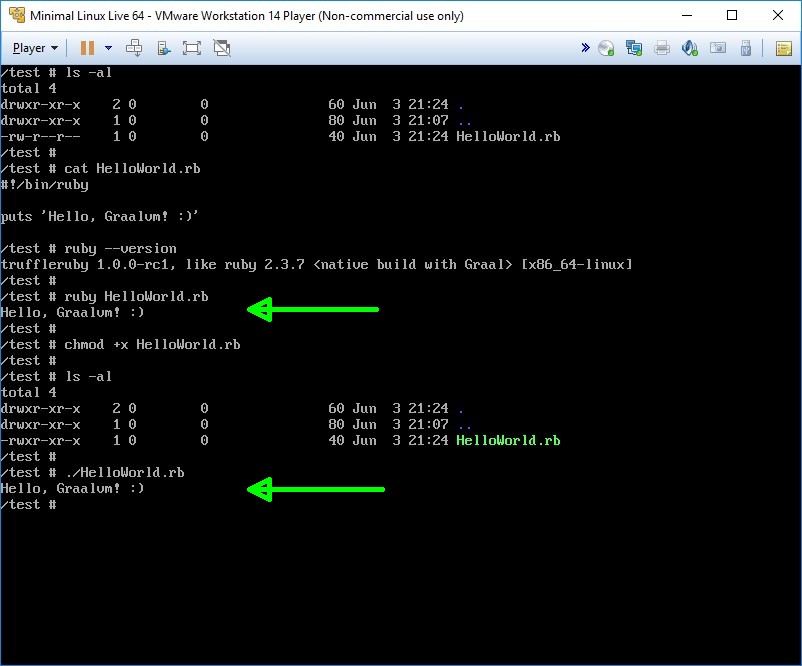 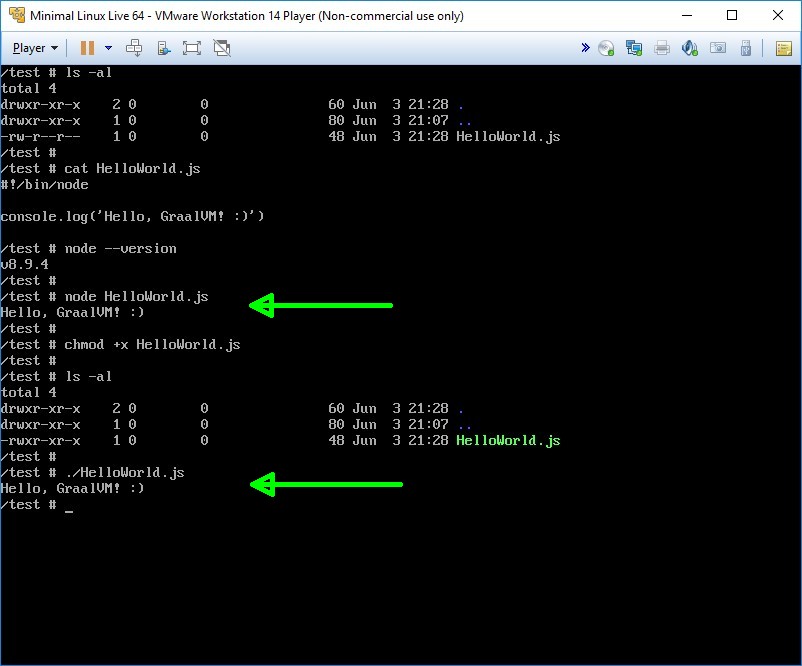 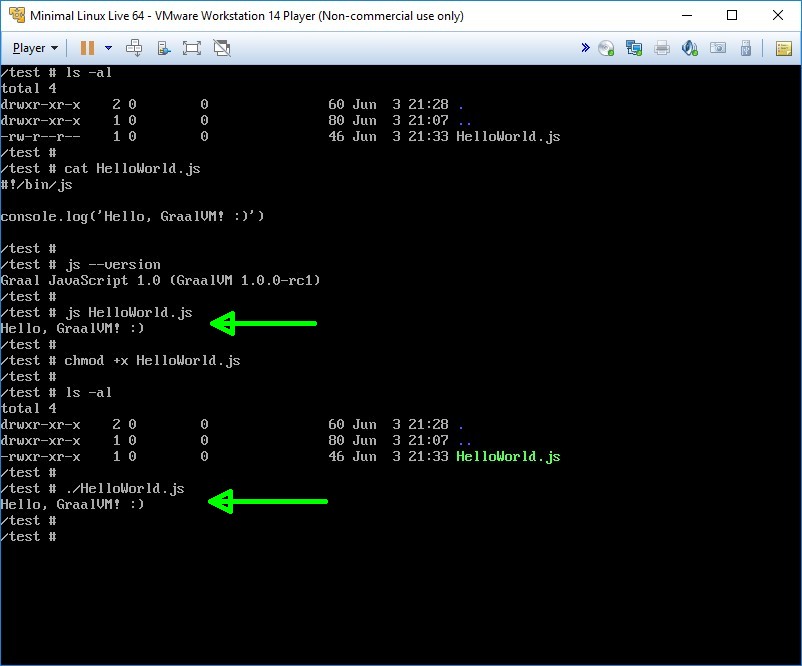 Minimal Linux Live can be used on UEFI systems (as of version 28-Jan-2018) thanks to the systemd-boot project. There are three build flavors that you can choose from:

The generated MLL iso image is 'hybrid' which means that if it is 'burned' on external hard drive, this external hard drive will be bootable. You can use this behavior to install MLL on your USB flash device (read the next section).

The older version of Minimal Linux Live 20-Jan-2017 has experimental UEFI support and the MLL ISO image can be used on legacy BIOS based systems and on UEFI based systems with enabled UEFI shell (level support 1 or higher, see section 3.1 - Levels Of Support of the UEFI Shell specification). All newer versions of Minimal Linux Live have full UEFI support.

The build process produces ISO image which you can use in virtual machine or you can burn it on real CD/DVD. Installing MLL on USB flash drive currently is not supported but it can be easily achieved by using syslinux or extlinux since MLL requires just two files (one kernel file and another initramfs file). This applies for legacy BIOS based systems.

Another way to install MLL on USB flash drive is by using YUMI or other similar tools. This applies for legacy BIOS based systems.

Yet another way to install MLL on USB flash drive is by using the dd tool:

It is also possible to start MLL over network, using PXE mechanism (often called PXE diskless boot). To achieve that, before building MLL, edit src/.config and set OVERLAY_LOCATION to rootfs instead of default iso. Then follow build process, which will build the minimal_linux_live.iso. Extract kernel and rootfs from this iso, and assuming webserver is using /var/www/html/ folder as index, copy files here:

Then assuming you are using iPXE as a PXE rom, and that your webserver ip is 10.0.0.1, create file /var/www/html/MLL.ipxe with the following content:

Note: append your console parameter on the kernel line if using a remote IPMI console.

And chainload your mail iPXE to this file.

If you find MLL or its related projects useful, you can express your positive attitude via PayPal donation. All donations will be spent on food.

If you don't like MLL (or me in particular), you can express your not-so-positive attitude via PayPal donation. All donations will be spent on food for thought.

Don't miss the chance to share your honest opinion about MLL in DistroWatch. And don't forget to check the Minimal Linux Live page on Facebook.

Thank you for your support!