This is the simplest artificial neural network possible explained and demonstrated.

each having a specific weight 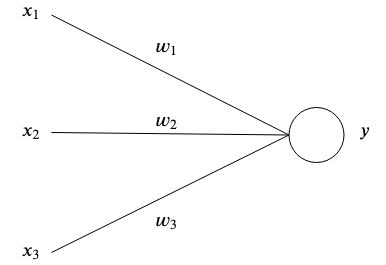 At the simplest level, the output is the sum of its inputs times its weights.

The purpose of a network is to learn a certain output

by approximating a complex function with many parameters

that we couldn't come up with ourselves.

Say we have a network with two inputs

The idea is to adjust the weights in such a way that the given inputs produce the desired output.

Weights are normally initialized randomly since we can't know their optimal value ahead of time, however for simplicity we will initialize them both to

If we calculate the output of this network, we will get

doesn't match the expected target value, then we have an error.
For example, if we wanted to get a target value of

then we would have a difference of

One common way to measure the error (also referred to as the cost function) is to use the mean squared error:

If we had multiple associations of inputs and target values, then the error becomes the average sum of each association.

We use the mean squared error to measure how far away the results are from our desired target. The squaring removes negative signs and gives more weight to bigger differences between output and target.

To rectify the error, we would need to adjust the weights in a way that the output matches our target. In our example, lowering

would do the trick, since

However, in order to adjust the weights of our neural networks for many different inputs and target values, we need a learning algorithm to do this for us automatically.

The idea is to use the error to understand how each weight should be adjusted so that the error is minimized, but first, we need to learn about gradients.

What is a gradient?

It's essentially a vector pointing to the direction of the steepest ascent of a function. The gradient is denoted with

and is simply the partial derivative of each variable of a function expressed as a vector.

It looks like this for a two variable function:

Let's inject some numbers and calculate the gradient with a simple example. Say we have a function

, then the gradient would be

What is gradient descent?

The descent part simply means using the gradient to find the direction of steepest ascent of our function and then going in the opposite direction by a small amount many times to find the function global (or sometimes local) minimum.

We use a constant called the learning rate, denoted with

to define how small of a step to take in that direction.

is too large, then we risk overshooting the function minimum, but if it's too low then the network will take longer to learn and we risk getting stuck in a shallow local minimum. 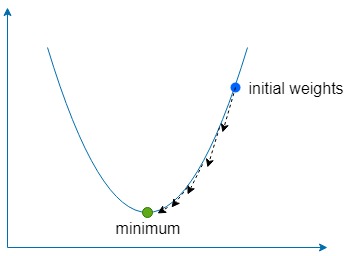 For our two weights

, we can find the gradient by using the chain rule

From now on we will denote the

Once we have the gradient, we can update our weights by subtracting the calculated gradient times the learning rate.

And we repeat this process until the error is minimized and is close enough to zero.

The included example teaches the following dataset to a neural network with two inputs and one output using gradient descent:

Once learned, the network should output ~0 when given two