Gaia is an open source automation platform which makes it easy and fun to build powerful pipelines in any programming language. Based on HashiCorp's go-plugin and gRPC, gaia is efficient, fast, lightweight, and developer friendly.

Develop powerful pipelines with the help of SDKs and simply check-in your code into a git repository. Gaia automatically clones your code repository, compiles your code to a binary, and executes it on-demand. All results are streamed back and formatted as a user-friendly graphical output.

Check out gaia-pipeline.io to learn more.

Automation Engineer, DevOps Engineer, SRE, Cloud Engineer, Platform Engineer - they all have one in common: The majority of tech people are not motivated to take up this work and they are hard to recruit.

One of the main reasons for this is the abstraction and poor execution of many automation tools. They come with their own configuration (YAML syntax) specification or limit the user to one specific programming language. Testing is nearly impossible because most automation tools lack the ability to mock services and subsystems. Even tiny things, for example parsing a JSON file, are sometimes really painful because external, outdated libraries were used and not included in the standard framework.

We believe it's time to remove all those abstractions and come back to our roots. Are you tired of writing endless lines of YAML-code? Are you sick of spending days forced to write in a language that does not suit you and is not fun at all? Do you enjoy programming in a language you like? Then Gaia is for you.

Gaia is based on HashiCorp's go-plugin. It's a plugin system that uses gRPC to communicate over HTTP/2. Initially, HashiCorp developed this tool for Packer but now it's heavily used by Terraform, Nomad, and Vault too.

Plugins, also called pipelines, are applications which can be written in any programming language, as long as gRPC is supported. All functions, also called jobs, are exposed to Gaia and can form up a dependency graph that describes the order of execution.

Pipelines can be compiled locally or simply over the integrated build system. Gaia clones the git repository and automatically builds the included pipeline. If a change (git push) happened, Gaia will automatically rebuild the pipeline for you*.

After a pipeline has been started, all log output is returned back to Gaia and displayed in a detailed overview with their final result status.

* This requires polling or webhook to be activated. 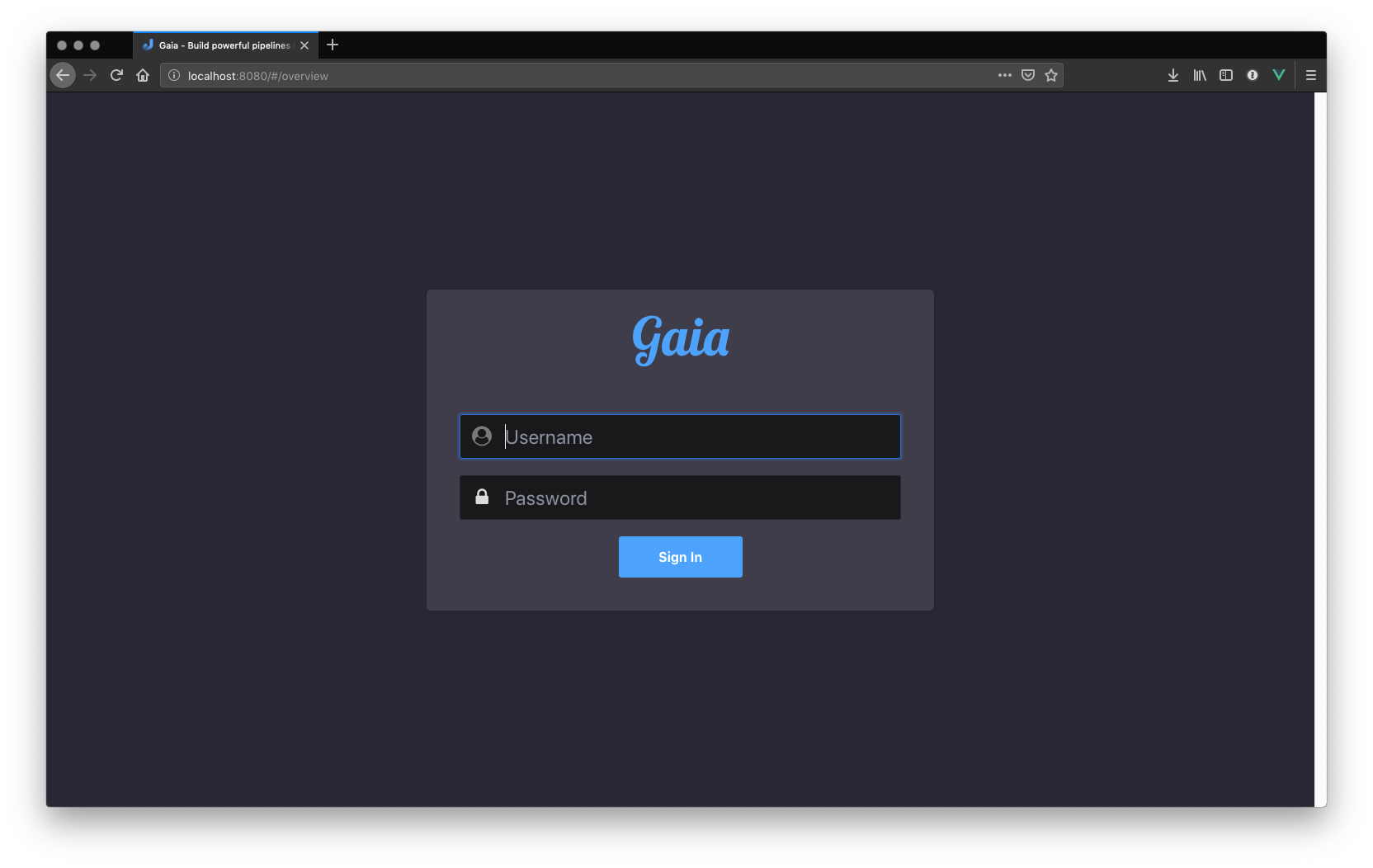 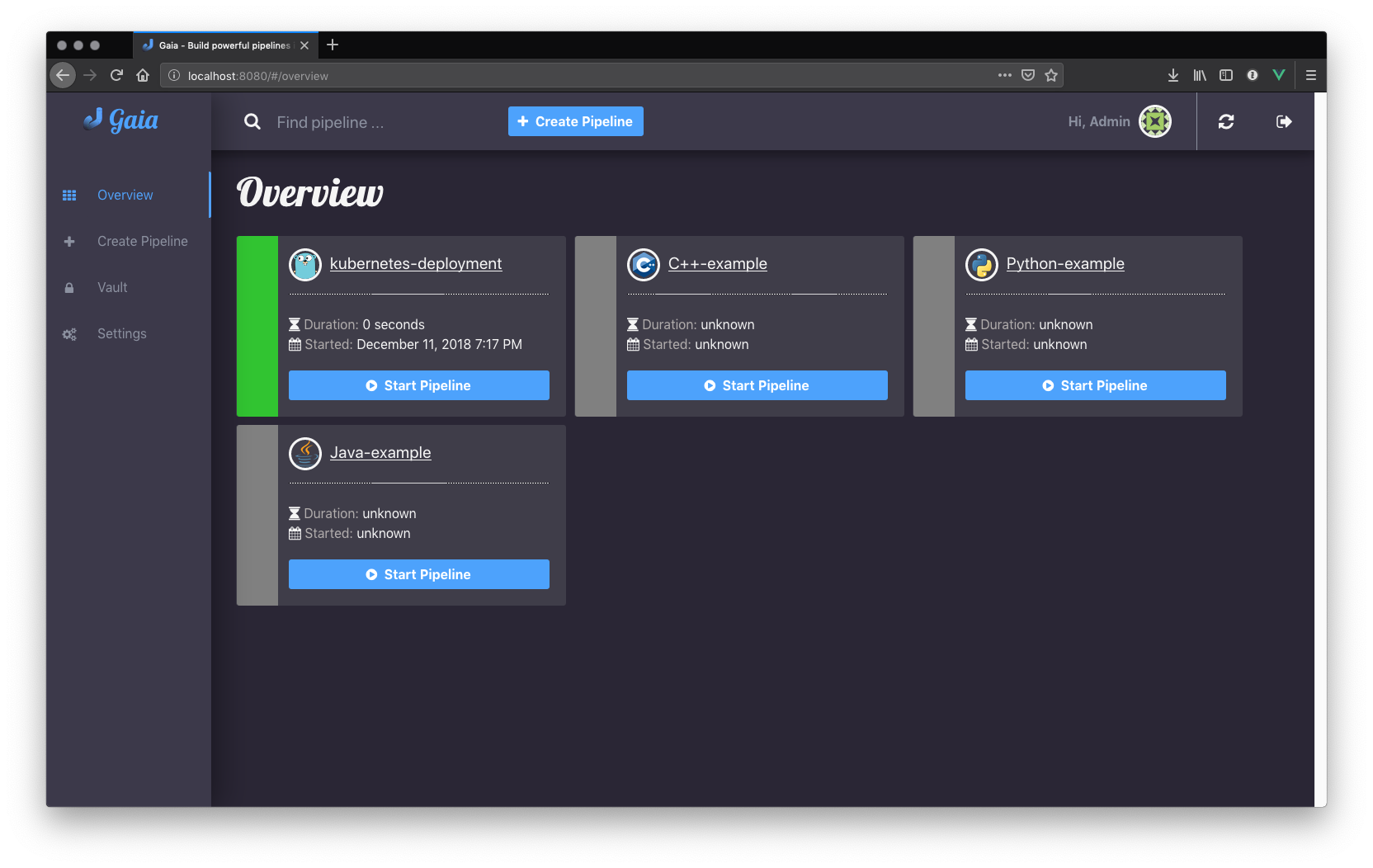 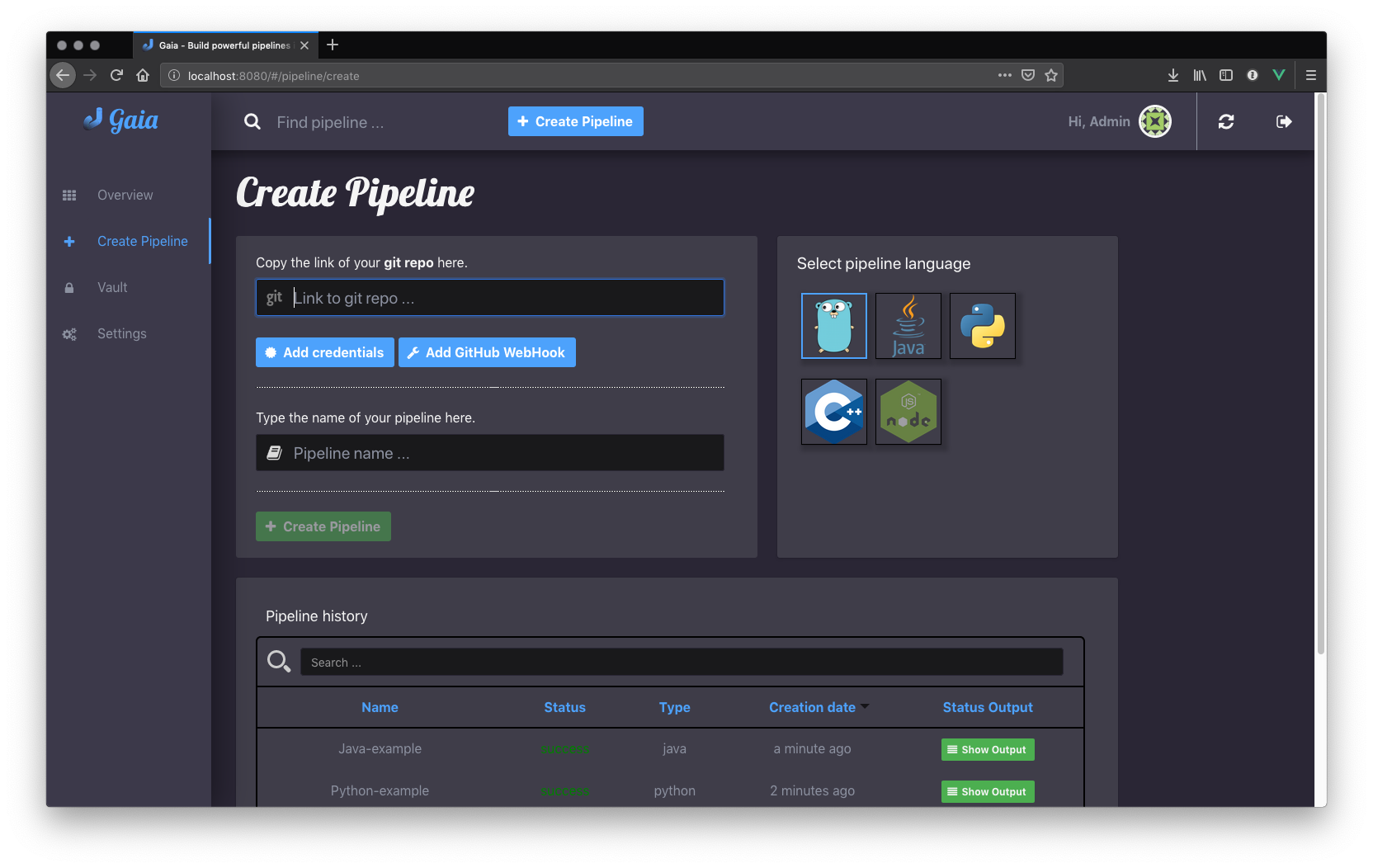 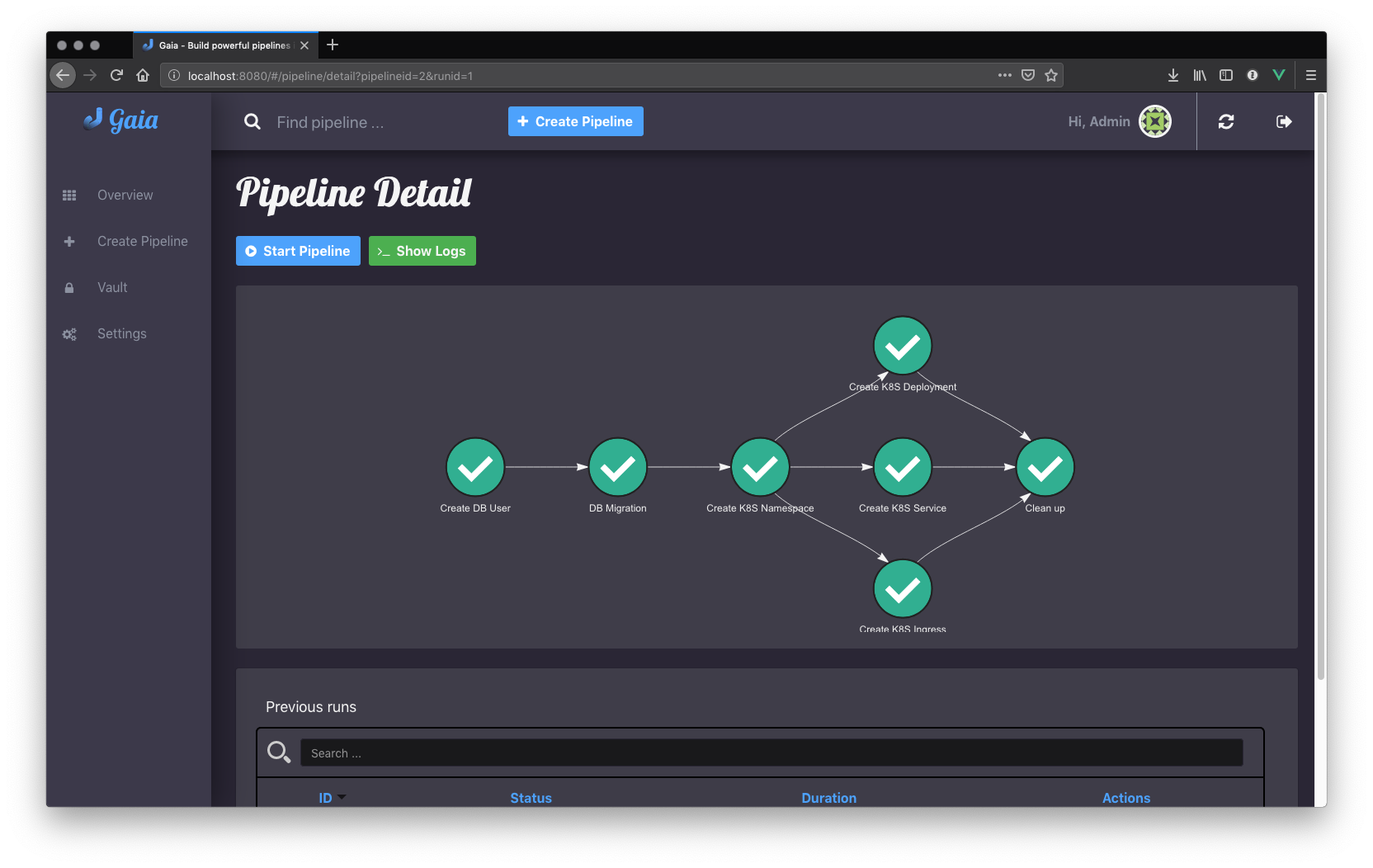 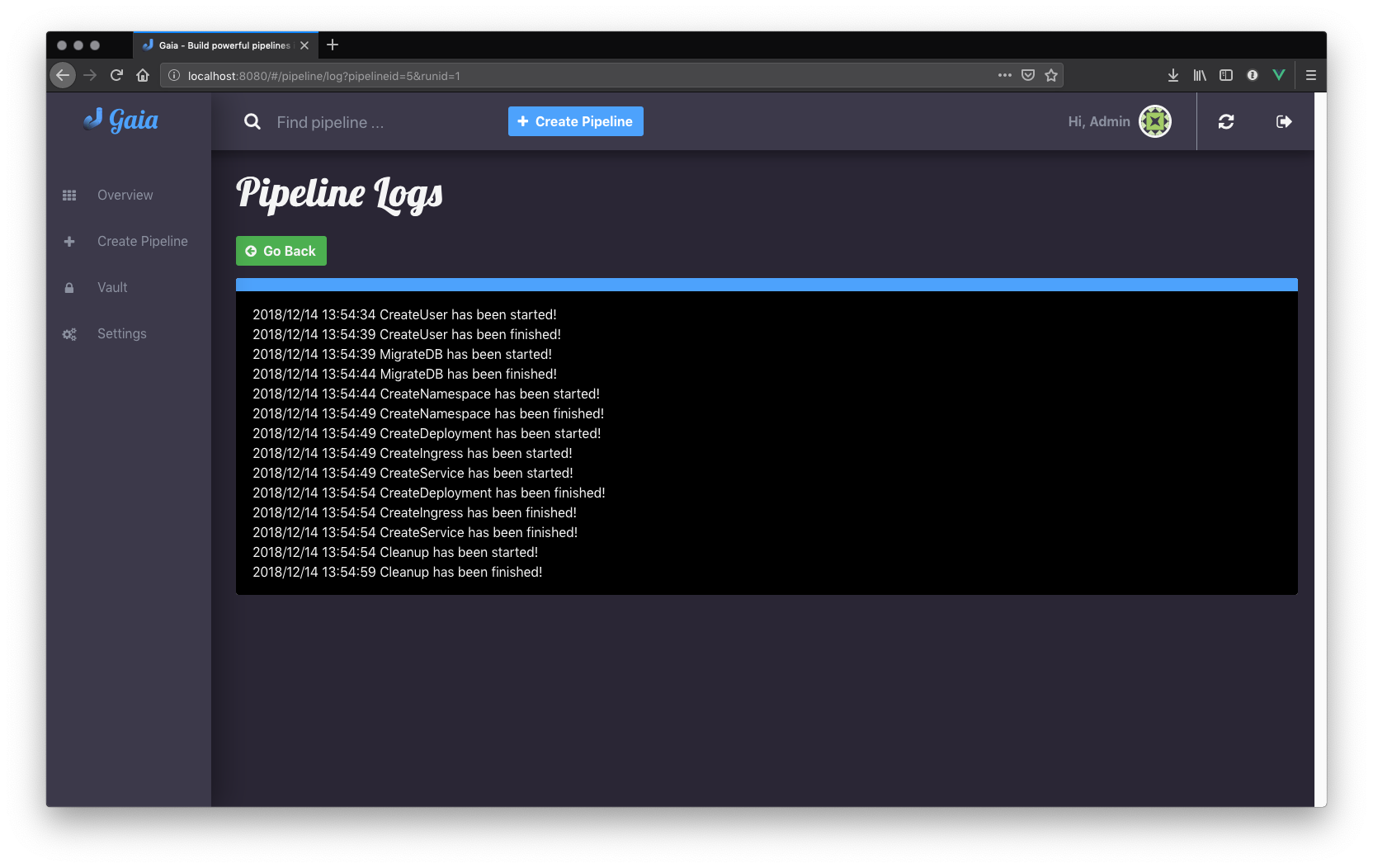 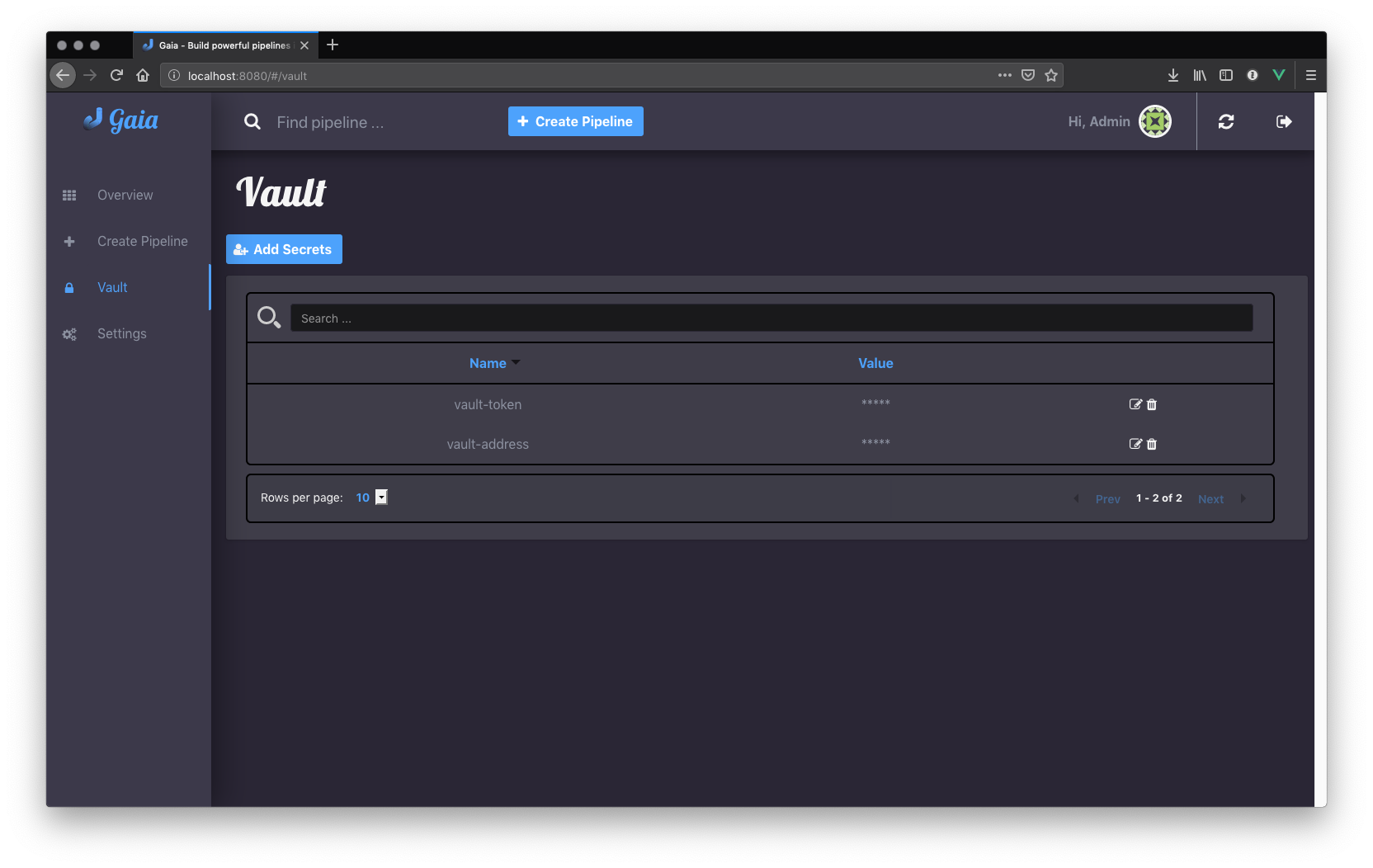 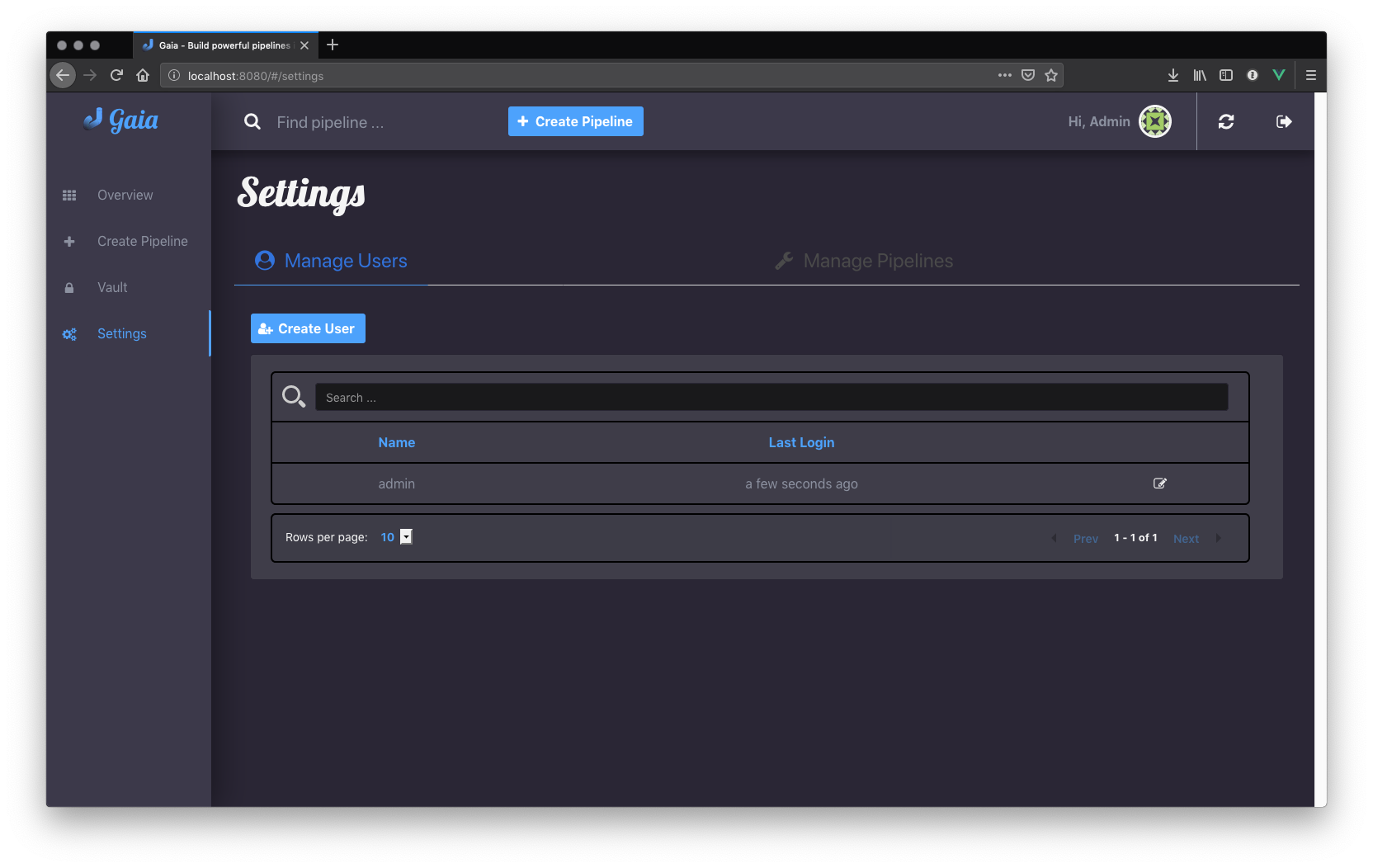 The installation of gaia is simple and often takes a few minutes.

The following command starts gaia as a daemon process and mounts all data to the current folder. Afterwards, gaia will be available on the host system on port 8080. Use the standard user admin and password admin as initial login. It is recommended to change the password afterwards.

This uses the image with the latest tag which includes all required libraries and compilers for all supported languages. If you prefer a smaller image suited for your preferred language, have a look at the available docker image tags.

It is possible to install Gaia directly on the host system. This can be achieved by downloading the binary from the releases page.

Gaia will automatically detect the folder of the binary and will place all data next to it. You can change the data directory with the startup parameter -home-path if you want.

If you haven't got an ingress controller pod yet, make sure that you have kube-dns or coredns enabled, run this command to set it up.

Pipelines are defined by jobs and a function usually represents a job. You can define as many jobs in your pipeline as you want.

Every function accepts arguments. Those arguments can be requested from the pipeline itself and the values are passed back in from the UI.

Some pipeline jobs need a specific order of execution. DependsOn allows you to declare dependencies for every job.

You can find real examples and more information on how to develop a pipeline in the docs.

Please find the docs at https://docs.gaia-pipeline.io. We also have a tutorials section over there with examples and real use-case scenarios. For example, Kubernetes deployment with vault integration.

Literally every tool that was designed for automation, continuous integration (CI), and continuous deployment (CD) like Spinnaker, Jenkins, Gitlab CI/CD, TravisCI, CircleCI, Codeship, Bamboo and many more, introduced their own configuration format. Some of them don't even support configuration/automation as code. This works well for simple tasks like running a go install or mvn clean install but in the real world there is more to do.

Gaia is the first platform that does not limit the user and provides full support for almost all common programming languages without losing the features offered by todays CI/CD tools.

What is a pipeline?

A pipeline is a real application with at least one function (we call it a Job). Every programming language can be used as long as gRPC is supported. We offer SDKs to support the development.

What is a job?

A job is a function, usually globally exposed to Gaia. Dependent on the dependency graph, Gaia will execute this function in a specific order.

Why do I need an SDK?

The SDK implements the Gaia plugin gRPC interface and offers helper functions like serving the gRPC-Server. This helps you to focus on the real problem instead of doing the boring stuff.

Which programming languages are supported?

When do you support programming language XYZ?

Feel free to open a new GitHub issue to request a new feature.

Gaia can only evolve and become a great product with the help of contributors. If you like to contribute, please have a look at our issues section. We do our best to mark issues for new contributors with the label good first issue.

If you think you found a good first issue, please consider this list as a short guide:

If you have any questions feel free to contact us on slack.