Awesome Open Source
Awesome Open Source
Share On Twitter
Freeciv Web
Freeciv-web is an Open Source strategy game implemented in HTML5 and WebGL, which can be played online against other players, or in single player mode against AI opponents.
Stars
1,767
License
other
Open Issues
88
Most Recent Commit
2 days ago
Programming Language
JavaScript
Repo

Freeciv-web is an open-source turn-based strategy game. It can be played in any HTML5 capable web-browser and features in-depth game-play and a wide variety of game modes and options. Your goal is to build cities, collect resources, organize your government, and build an army, with the ultimate goal of creating the best civilization. You can play online against other players (multiplayer) or play by yourself against the computer. There is both a HTML5 2D version with isometric graphics and a 3D WebGL version of Freeciv-web.

Currently known servers based on Freeciv-web, which are open source in compliance with the AGPL license: 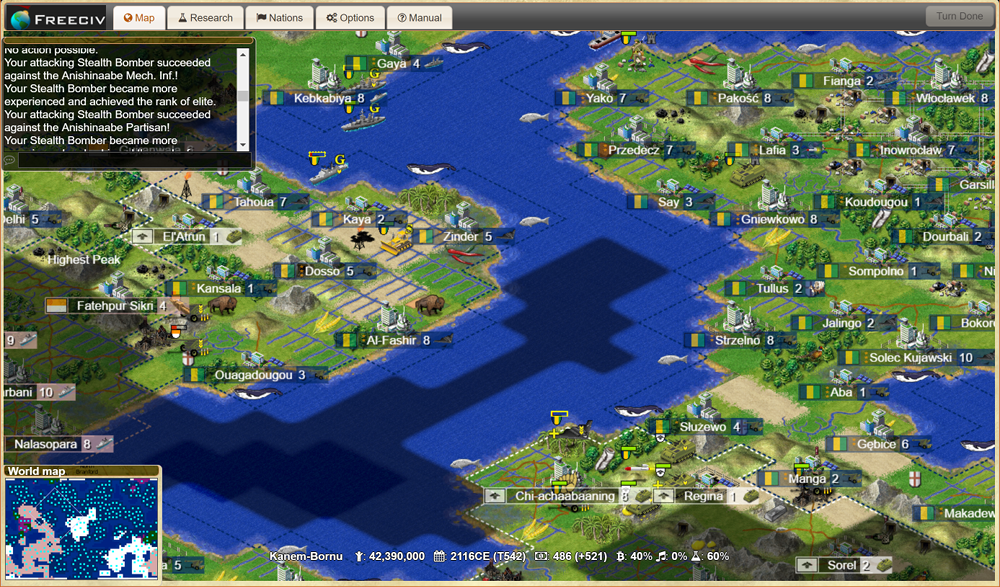 Freeciv-Web consists of these components:

Freeciv WebGL is the 3D version, which uses the Three.js 3D engine. More info about the WebGL 3D version can be found for developers and 3D artists. Developer: Andreas Rsdal @andreasrosdal

Running Freeciv-web on your computer

The recommended and probably easiest way is to use Vagrant on VirtualBox.

Whatever the method you choose, you'll have to check out Freeciv-web to a directory on your computer, by installing Git and running this command:

You may also want to change some parameters before installing, although it's not needed in most cases. If you have special requirements, have a look at config.dist, copy it without the .dist extension and edit to your liking.

Please keep in mind that the files are to be used in a Unix-like system (some Ubuntu version with the provided Vagrant file). Line endings for text files are different in Windows, and some editors "correct" them, making the files unusable in the VM. There's some provision to recode the main configuration files when installing, but not afterwards. If you touch shared files after installation, please use an editor that respect Unix line endings or transform them with a utility like dos2unix after saving them.

Running Freeciv-web with Vagrant on VirtualBox

Freeciv-web can be setup using Vagrant on VirtualBox to quickly create a local developer image running Freeciv-web on latest Ubuntu on your host operating system such as Windows, OSX or Linux. This is the recommended way to build Freeciv-web on your computer.

This will build, compile, install and run Freeciv-web on the virtual server image. Wait for the installation process to complete, watching for any error messages in the logs. If you get an error message about Virtualization (VT) not working, then enable Virtualization in the BIOS.

To log in to your Vagrant server, run the command:

The Vagrant guest machine will mount the Freeciv-web source repository in the /vagrant directory. Note that running Freeciv-web using Vagrant requires about 4Gb of memory and 3 Gb of harddisk space.

Install this software if you are not running Freeciv-web with Vagrant:

When in a tested system, you may run scripts/install/install.sh and it will fetch and configure what's needed.

All software components in Freeciv-web will log to the /logs sub-directory of the Freeciv-web installation.

Freeciv-web can easily be built and run from Docker using docker-compose.

Enjoy. The overall dockerfile and required changes to scripts needs some further improvements.

Freeciv-Web is built on GitHub actions on every commit. This is the current build status:

If you want to contibute to Freeciv-web, see the issues on GibHub and the TODO file for some tasks you can work on. Pull requests on Github is welcome!

React Web Audio ⭐ 160
A small example React app that listens to the microphone and visualises the audio
most recent commit 16 days ago
Wechart ⭐ 146
Create all the [ch]arts by cax or three.js - Cax 和 three.js 创造一切图[表]
total releases 3most recent commit 2 years ago