This is version of Securify is deprecated and will be no longer supported. Please use Securify v2.0. 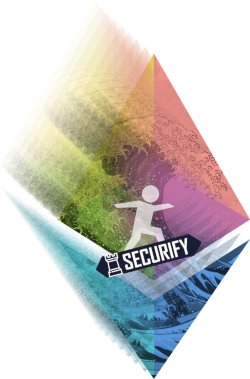 Securify is a security scanner for Ethereum smart contracts supported by the Ethereum Foundation and ChainSecurity. The core research behind Securify was conducted at the ICE Center at ETH Zurich.

It features an extensive list of security patterns commonly found in smart contracts:

The project is meant to be an open platform welcoming contributions from all of the Ethereum Security Community. To suggest new patterns, to volunteer for testing or to contribute developing new patterns please get in touch through our Discord group.

To run Securify on a Solidity file:

To run Securify on the decompilation output provided by the pysolc.py script (which requires py-solc):

To run Securify on some EVM binary (produced e.g. by solc):

To run the tests (which use JUnit4):

A Python wrapper helps to deal with solc and truffle. The requirements are in the requirements.txt file. The Dockerfile can be used as a reference to set-up your local environment to use this wrapper.

The installation should be simple enough on Debian derivatives, or any other platform supported by Soufflé.

For a quick demonstration which does not require Soufflé, you can use Docker.

Run Securify on a small example:

You can change the files analyzed by specifying a volume to mount, and every *.sol file contained will then be processed by Securify:

Adding a --truffle flag should allow Securify to run over Truffle project in which dependencies have already been installed (so run npm install before if need be). Without this flag, the project is compiled using solc. Add a -h to obtain the full list of options. In particular, if the user wants to receive compilation information from Truffle, he should add the -v flag.

If one wants to receive JSON output, the docker supports a --json flag that will suppress the pretty output and return JSON instead. Make sure to add the -q flag if no progress information should be displayed, hence resulting in pure JSON output. The indices of the lines matched are 0-based, meaning that a match to line i means that the i+1th line is matched. In particular, the first line has an index of 0.

Basic end to end tests can be run through the test.py file:

The requirements can be installed using Pipenv:

These tests compare the current json output given by Securify with some past output, and report differences between the two.

You can add the following .travis.yml to your project to run Securify on new commits:

This should allow Securify to run over Truffle project in which dependencies have already been installed (so run npm install before if need be).

The output loosely follows the clang style. Only warnings and vulnerabilities are reported. If one wishes to also get the compliance information, please use the --json flag in the docker, or -co flag on the Java executable to get all analysis information in JSON format.

Join our Discord to discuss with other users.

Although Securify is regularly used to help audits at ChainSecurity, there are still bugs, including:

Presentations, research, and blogs about Securify

Securify statically analyzes the EVM code of the smart contract to infer important semantic information (including control-flow and data-flow facts) about the contract. This step is fully automated using Soufflé, a scalable Datalog solver. Then, Securify checks the inferred facts to discover security violations or prove the compliance of security-relevant instructions.

The full technical details behind the Securify scanner are available in the research paper.