re-frame-10x lets you instrument, and then inspect, the inner workings of a running re-frame application. It presents as a programmer's dashboard, delivering curated insight and illumination.

Note: If also using re-com then on upgrading to reagent you may also need to upgrade re-com. 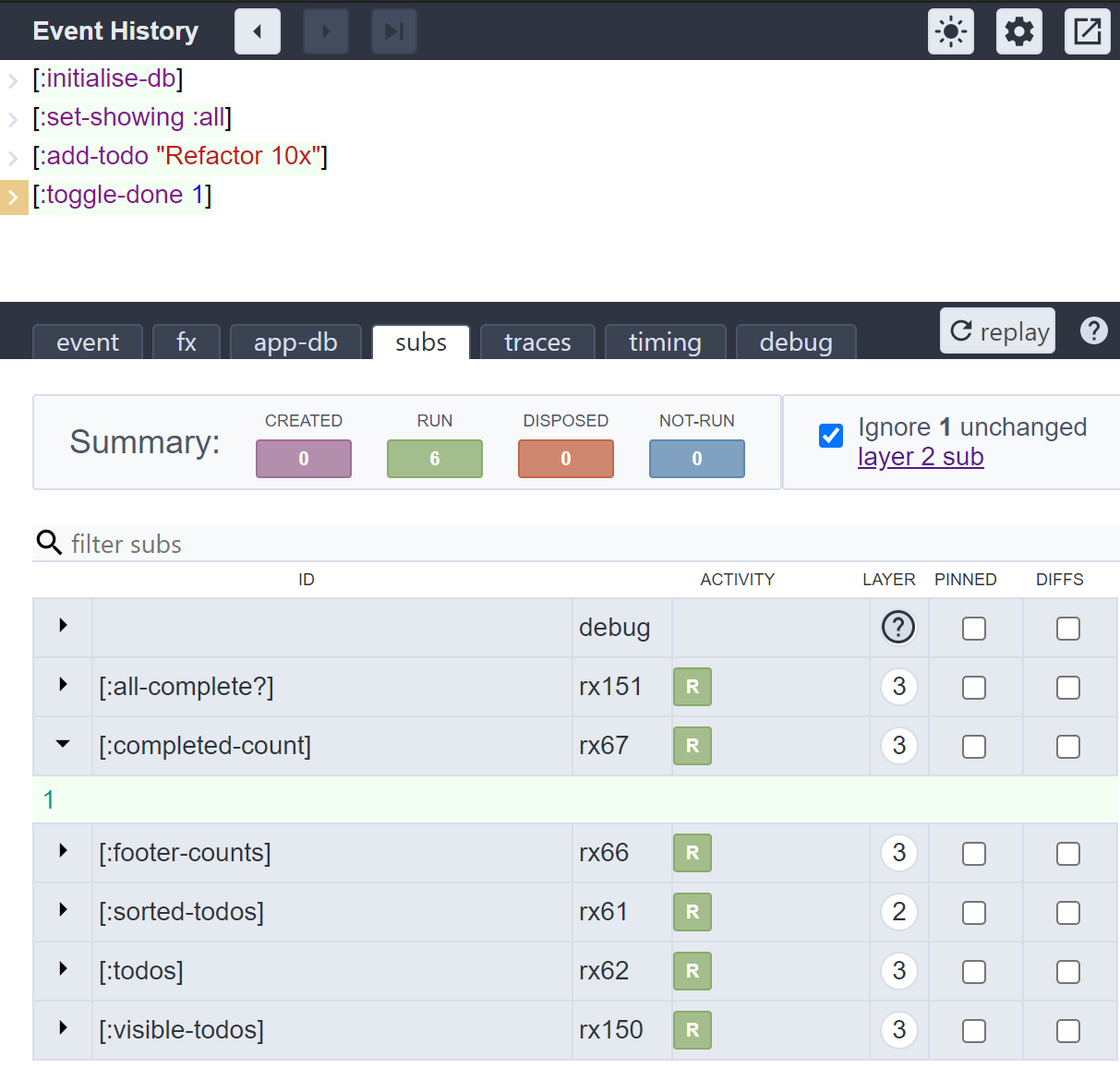 Describe It To Me

It Is Epoch Oriented

re-frame applications are computationally regular. First an event happens, and then boom, boom, boom go a series of known computational steps (aka dominoes), in a known order. When this chain reaction completes, a re-frame app enters a quiescent state waiting for another event to kick off the next iteration of the same process.

Each re-frame event and its consequent computation forms a bounded "epoch" which can be inspected, analysed and understood independently of other epochs. This tool is epoch-oriented - it shows you one at a time.

And, yes, it has "time travel debugger" capabilities - you can go backwards and forwards through epochs - but that's really not the most interesting or powerful aspect of what re-frame-10x delivers.

It Is About Trace Data

As it runs, re-frame logs "trace" as data, and this provides an x-ray (MRI?) of your app's inner functions. At its most basic level, re-frame-10x is a consumer, processor and presenter of trace data.

It Is About The Data Flow

re-frame is a functional framework but it's design is "data oriented". It "flows" data, in a loop, through the functions you provide. To understand what is happening in your re-frame app, you must understand what data is "happening".

It Is Always About The Data

So, that's two good re-frame-specific reasons why data is at the core of re-frame-10x, but actually, the importance of data is even more fundamental that that.

Each time you put a println into your program, you are printing out what? And why? Invariably, it is data which fuels your debugging investigation, confirming your current hypothesis, or not.

And when you write your unit tests, you represent your expections as what? Code is proved correct by the data it produces.

So, for debugging and understanding activities, "more data, more easily" is winning. If re-frame-10x does its job, it shouldn't be necessary for you to add printlns. The data you need should be captured and presented, and, if further experimentation is required, it should be available in your REPL too.

Perhaps you have seen LightTable in action?

In the small, it is a delightfully productive debugging environment because it co-renders code with the data generated by running the code. The data provides a "paper trail" which brings the code to life, revealing its dynamics and enriching a programmer's understanding.

re-frame-10x has a similar goal, although the method is different.

It Is A Data Dashboard

Observing raw data trace is both interesting and valuable, but it isn't enough. First, we want to leverage this data for insights. And, second, there's often too much data - you can drown in the detail.

So, re-frame-10x tries to be a "dashboard" which curates this "raw data" into "information" through various kinds of analysis and "roll ups". It should deliver insight "at a glance", while still allowing you to drill down into the detail.

Point 3, is primary, of course. But Point 2 is almost as important because we all spend a lot of our time groking unfamiliar codebases. Being able to observe the inner workings of a running app is a great way to bring code to life, reveal key features, and build a cognitive map of how the code is structured.

Some of the claims above are aspirational. re-frame-10x remains a WIP.

Of Sausage And Sizzle

Internal discussion about a name meandered for a while. Initially, it was re-frame-trace, which is accurate, sure, but it is also 100% sausage because it talks about low level function, and not higher level benefit (sizzle, sizzle). Side stepping the issue, I wanted to call it vox-datum (voice of the data) but that was cruelly rejected, for reasons I don't care to remember. The pain. I mean, who the hell doesn't like a Latin name?? Philistines.

If benefit was a must, then there was -insight and -illumination, but adding either made the name waaaay too long. Naming things - it really is a nightmare!

Finally, -10x cheekily materialised, delivering 100 decibels of audacious sizzle, and consequently a challenge for us to live up to. A 10x programmer starts by having 10x more knowledge and insight - so go make that tool, smarty pants.

re-frame-10x configuration is per-project, only one person in your team needs to configure a project to use it, and then everyone else can benefit.

If you are using leiningen, modify project.clj in the following ways. When puzzling over the various possible leiningen configurations, it's often helpful to look at a sample project.clj.

If you don't meet those pre-requisites, or you are using Shadow CLJS see the docs on advanced setups for other ways to install re-frame-10x.

cljs-devtools is not required to use re-frame-10x, but it is highly recommended.

re-frame-10x includes an experimental code tracing feature for tracing the code in your event handlers. See day8/re-frame-debux for instructions on how to set it up. 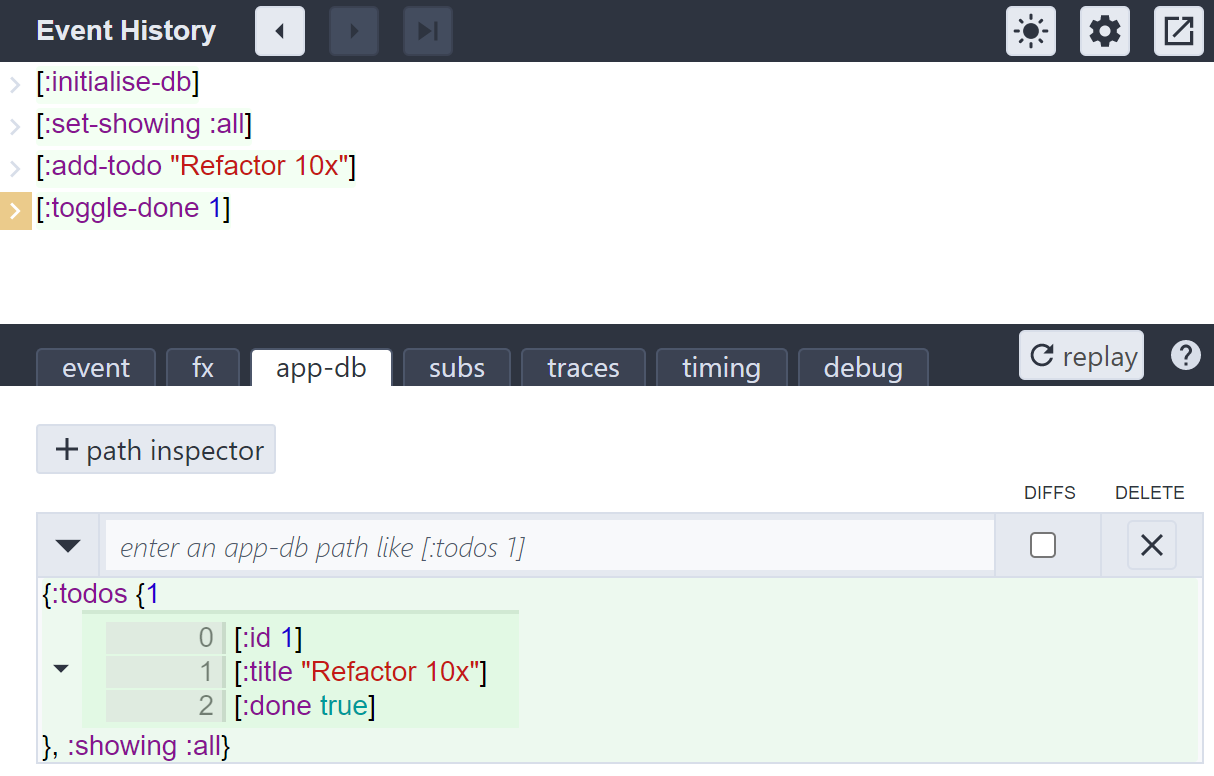 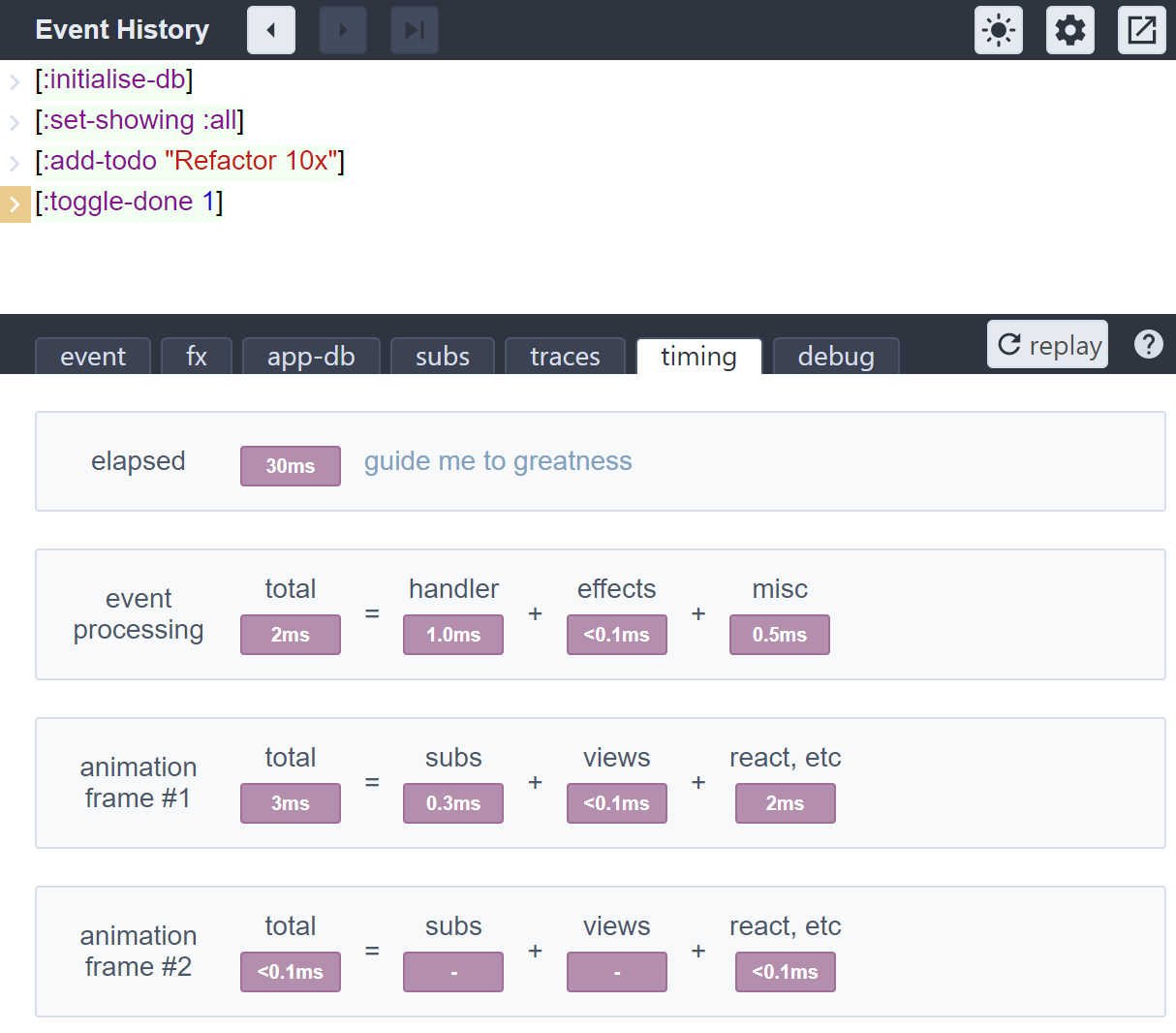 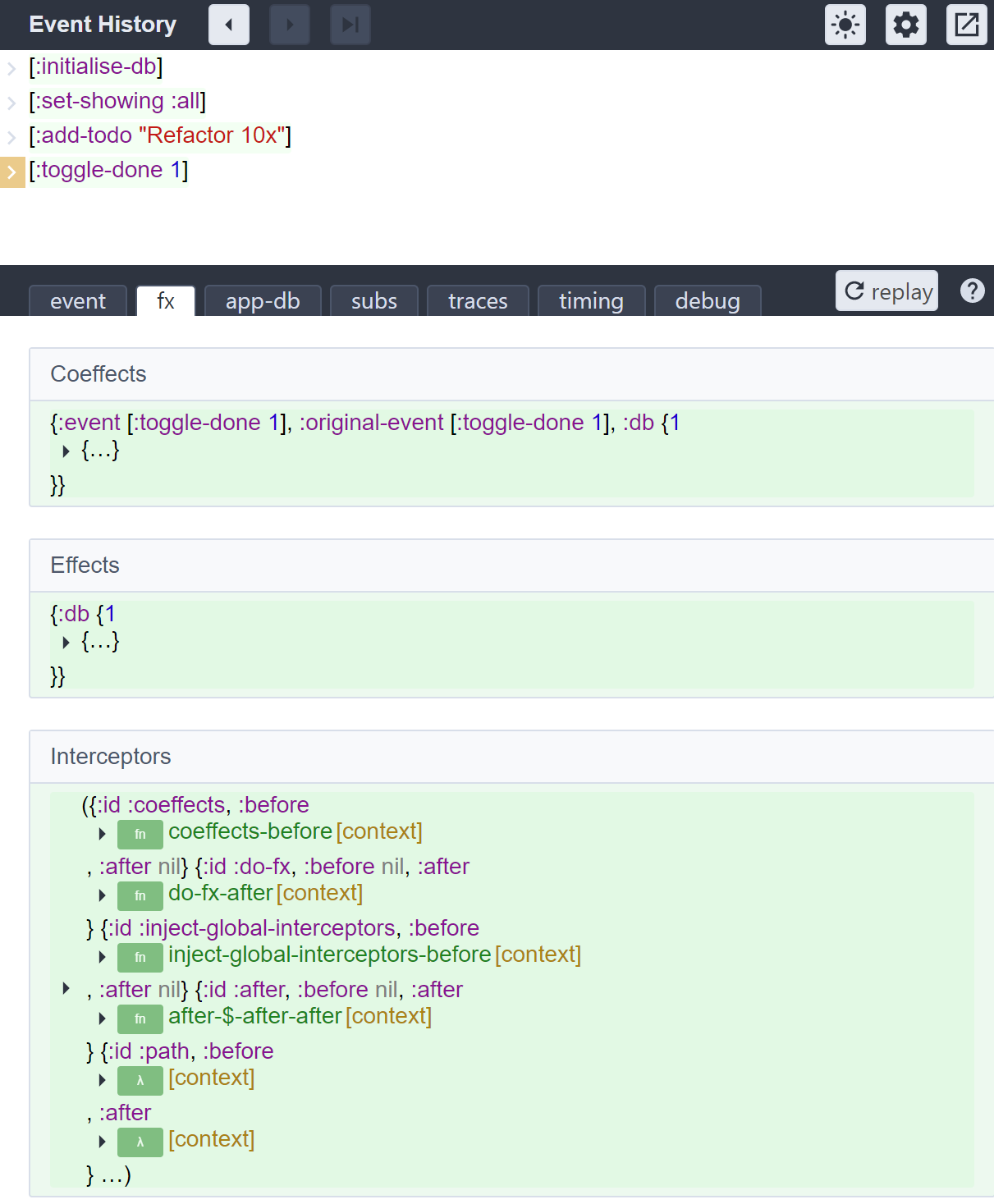 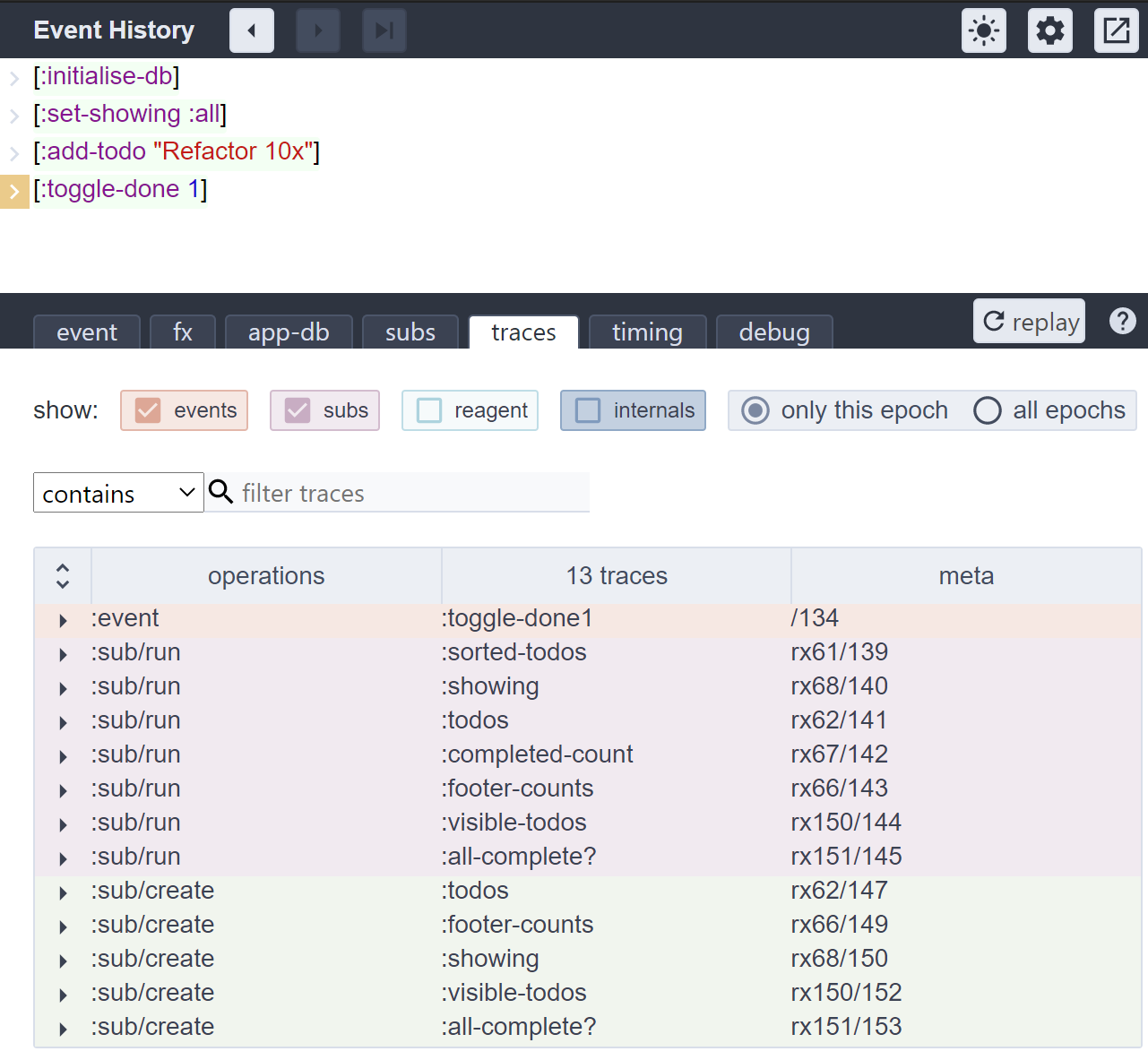 If re-frame-10x throws an exception on startup

The expansion triangles in the data browsers don't work any more. But they used to.

re-frame-10x consumes this trace data and renders useful visualisations of the re-frame process. Currently, re-frame's tracing capabilities are in alpha and are subject to change at any time. We're testing the utility of the the trace by building an app on top.

By default, re-frame tracing is "compiled out", so it won't impose a performance cost in production. The trade-off here is that you need to explicitly enable it in development.

The preloads option (:preloads [day8.re-frame-10x.preload]) has to be set in order to automatically monkeypatch Reagent to add appropriate lifecycle hooks. Yes this is gross, and yes we will make a PR to reagent to add proper hooks, once we know exactly what we need. The preload namespace also injects a div containing the devtools panel into the DOM.