Please open the command line prompt and execute the command below. Make sure you have installed docker-compose in advance.

Next, you can look into the docker-compose.yml (with detailed config params) and the Documentation for further information.

Please use docker-compose to one-click to start up. By doing so, you don't even have to configure MongoDB database. Create a file named docker-compose.yml and input the code below.

Then execute the command below, and Crawlab Master and Worker Nodes + MongoDB will start up. Open the browser and enter http://localhost:8080 to see the UI interface. 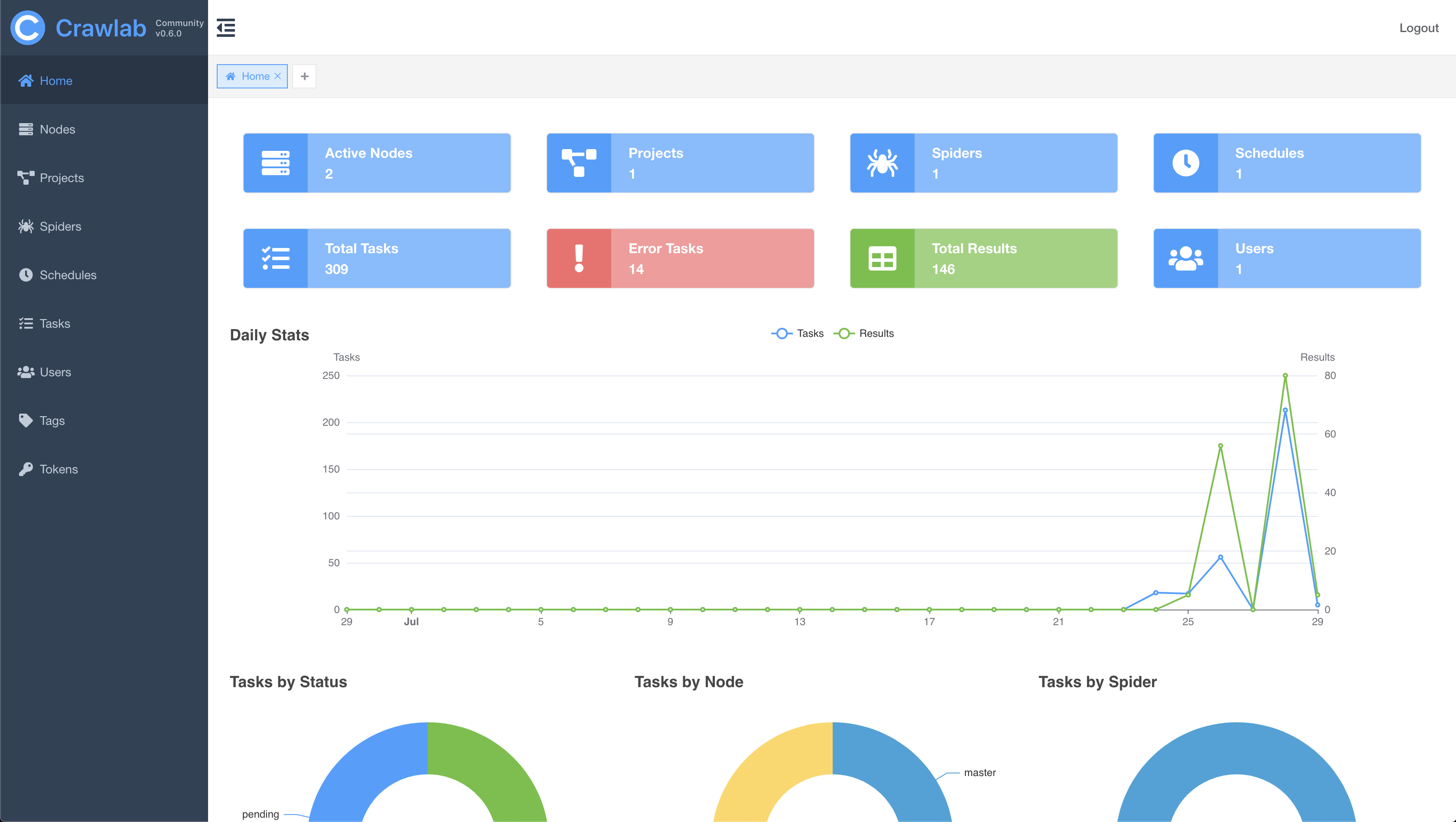 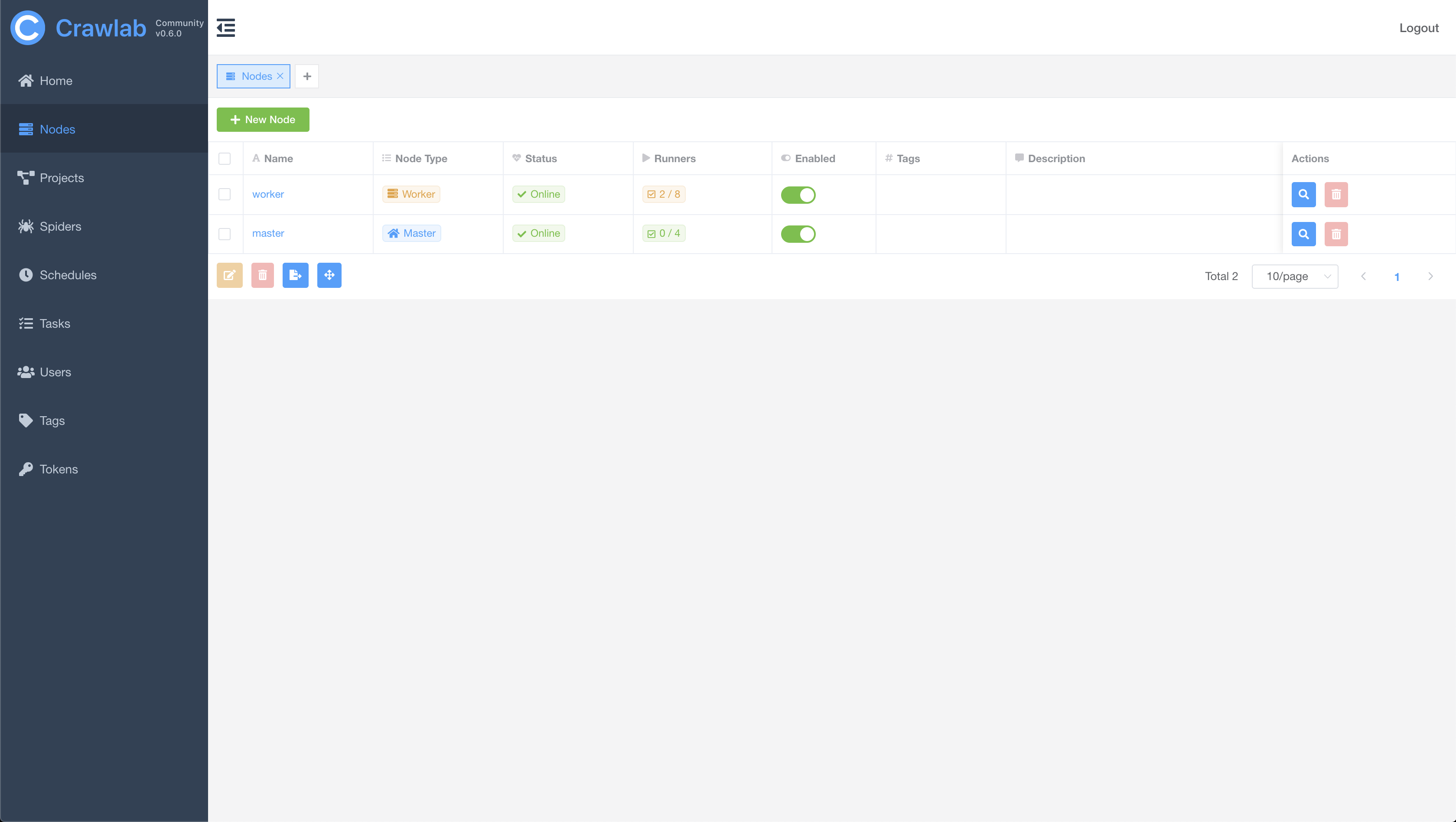 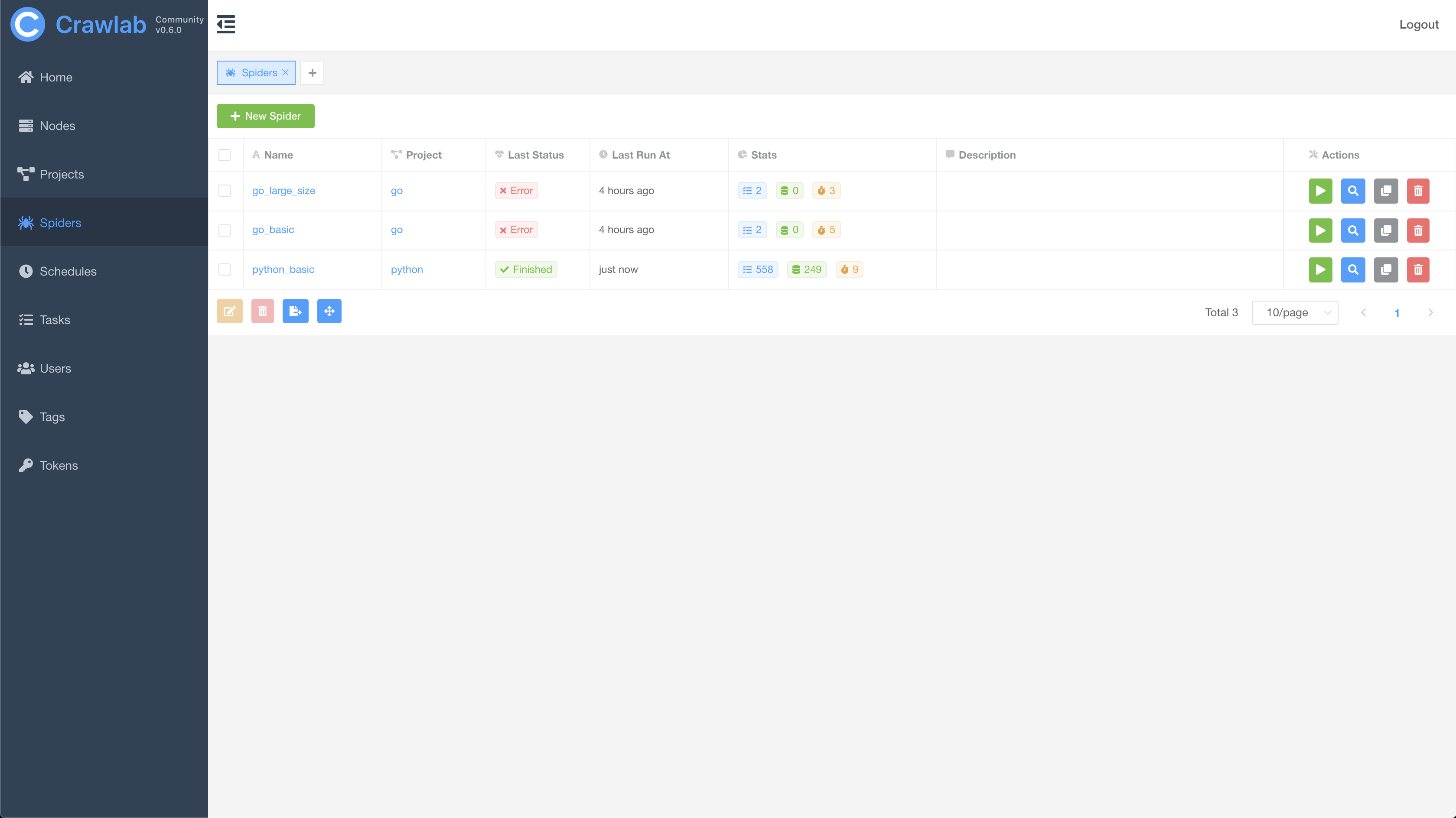 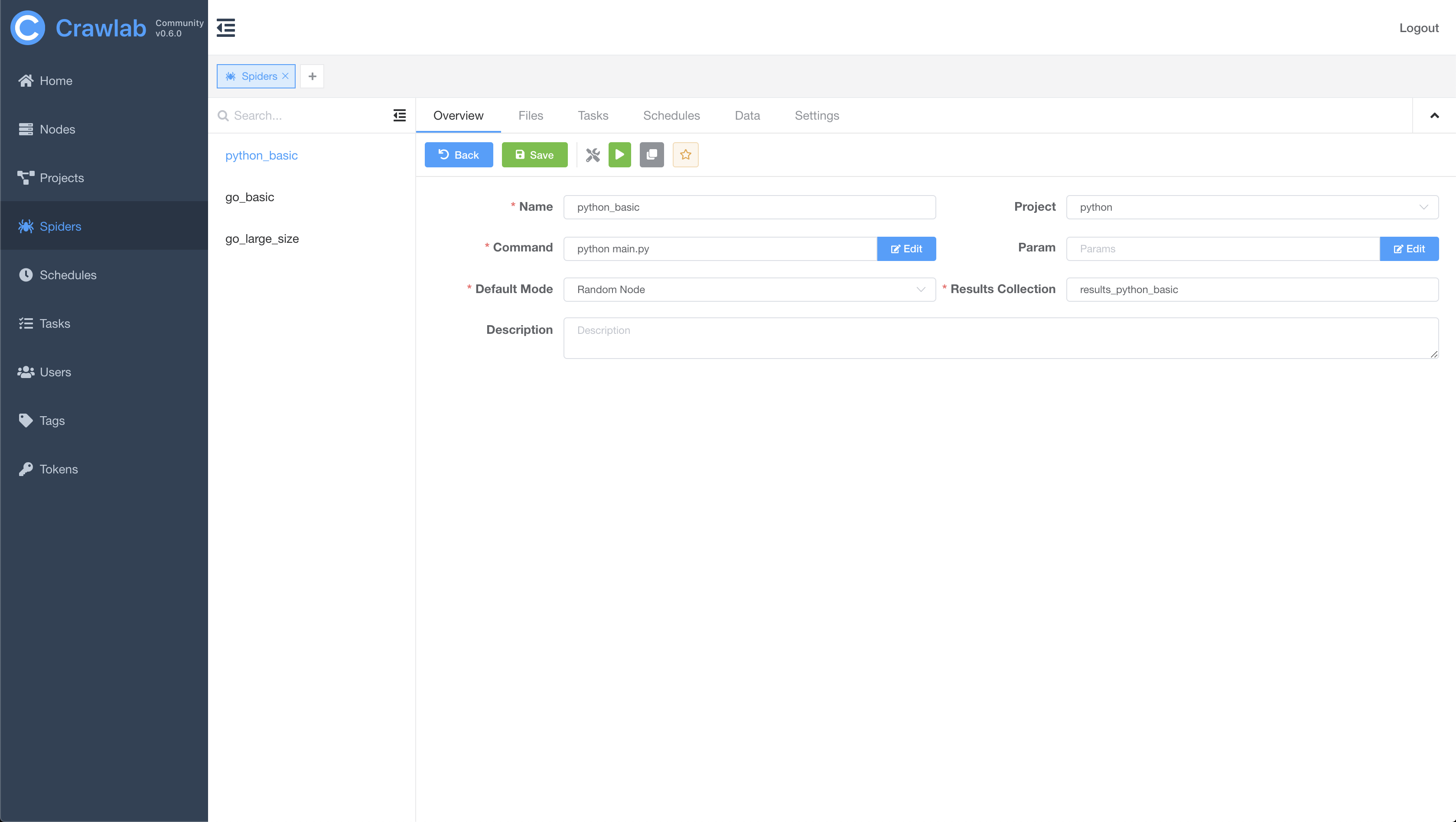 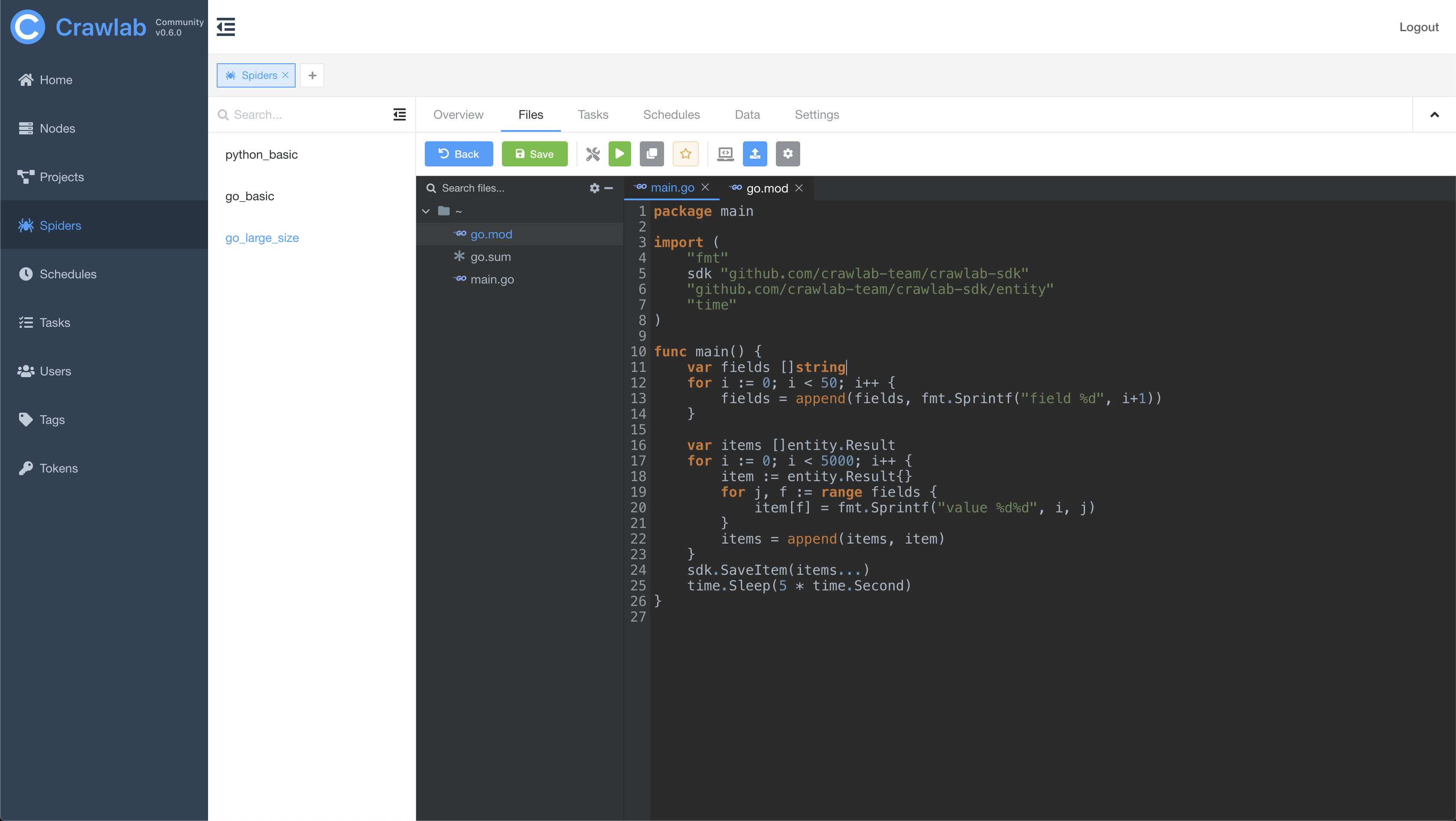 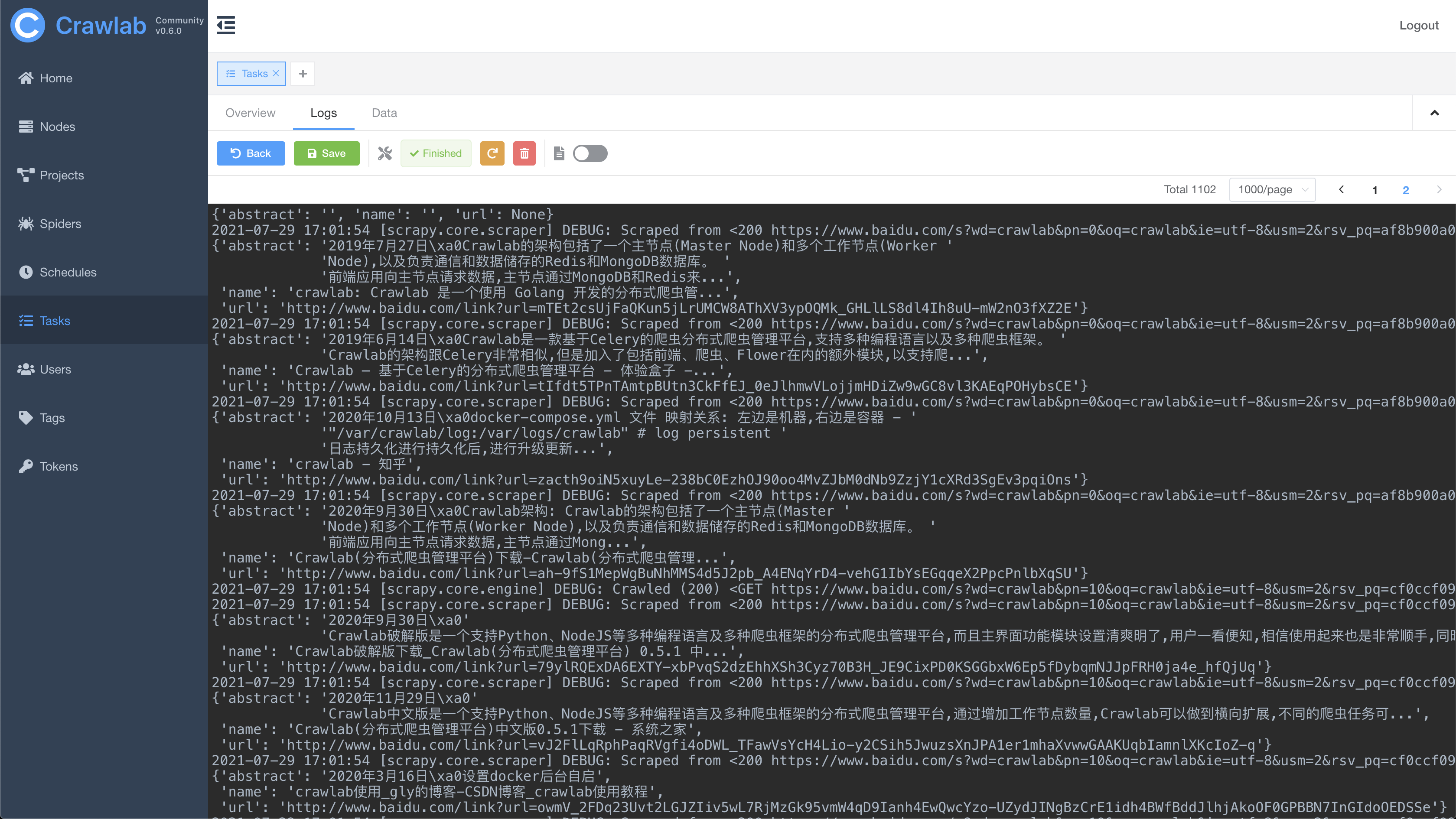 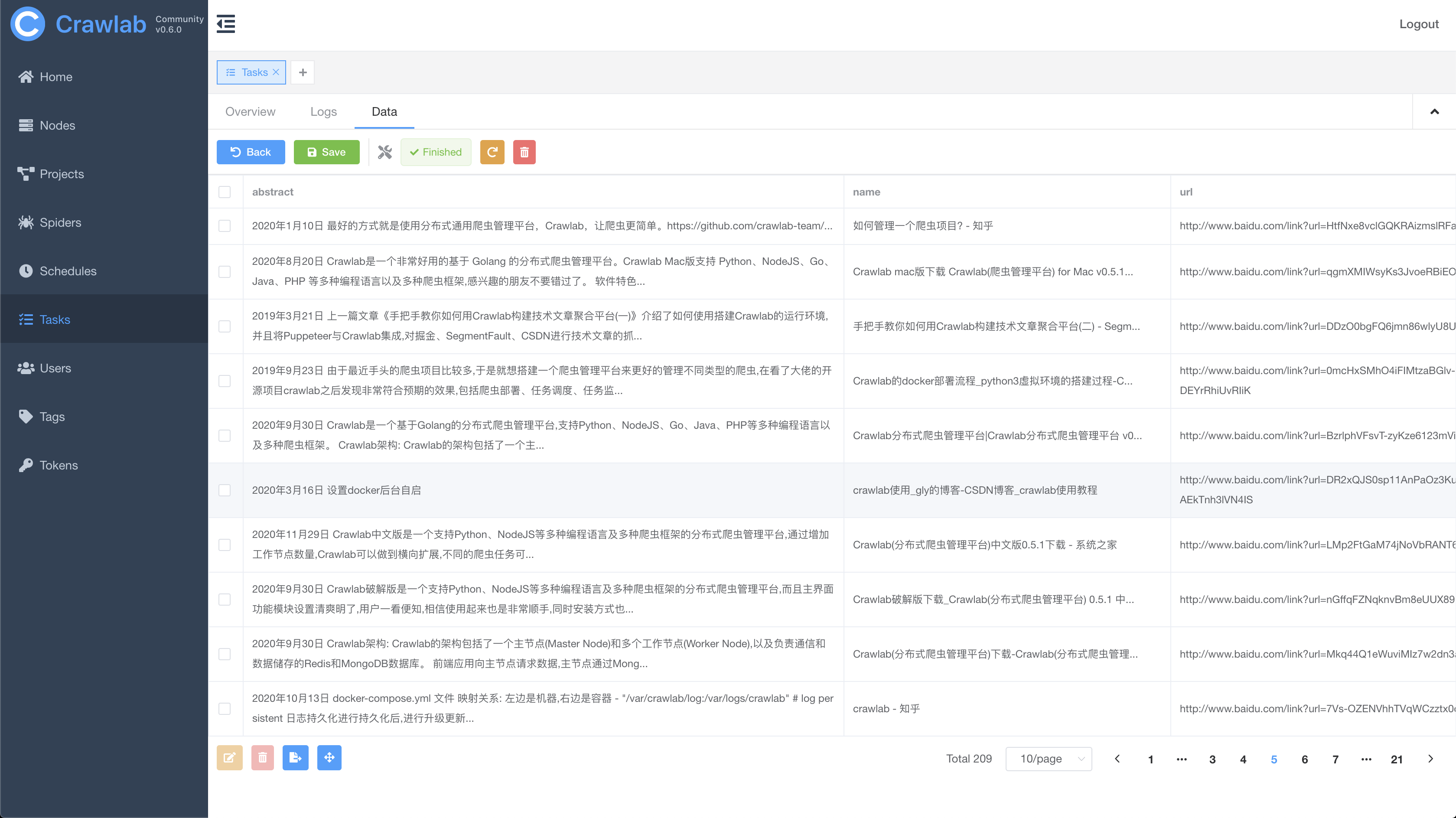 The architecture of Crawlab is consisted of a master node, worker nodes, SeaweedFS (a distributed file system) and MongoDB database. 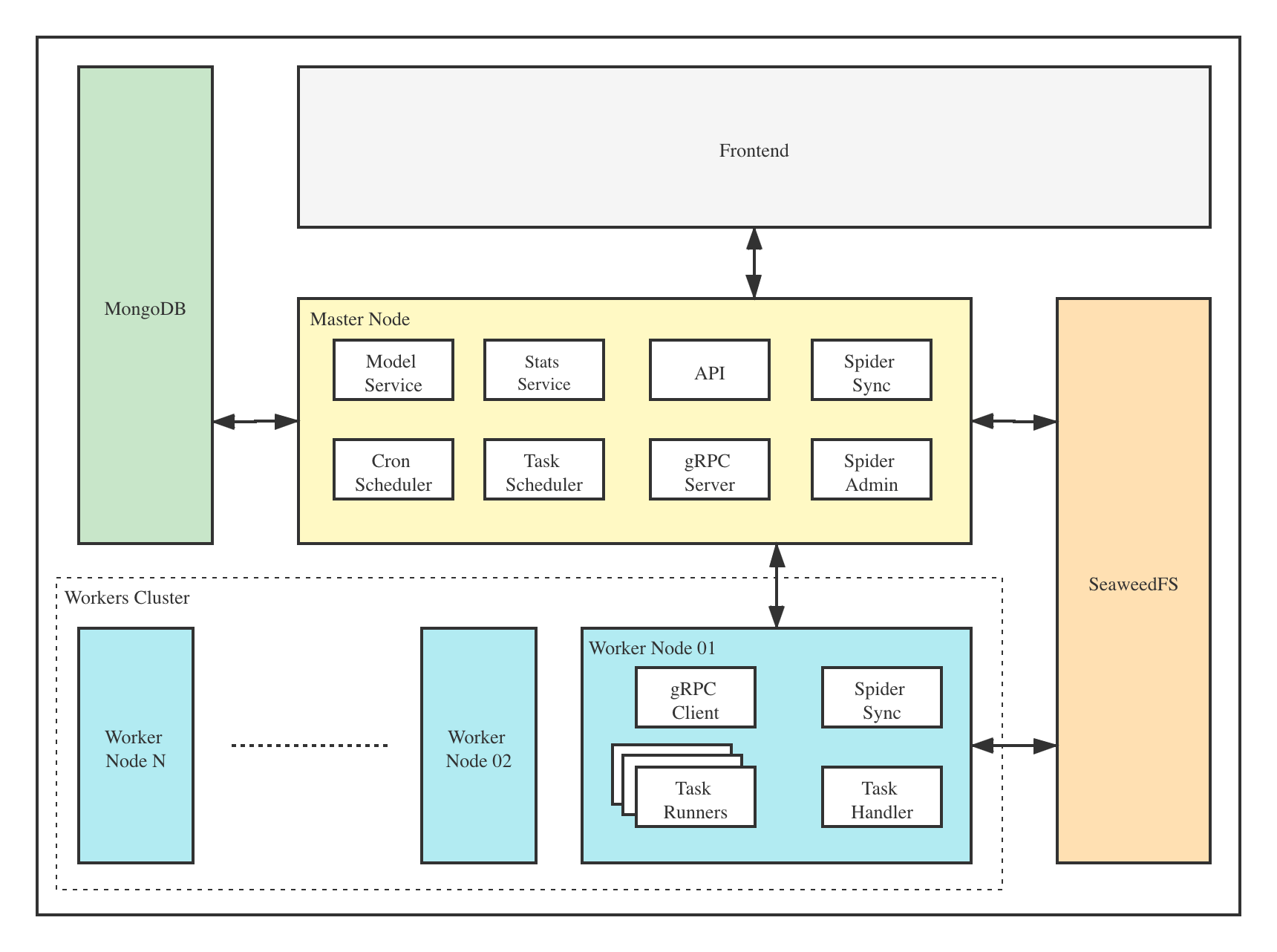 The frontend app interacts with the master node, which communicates with other components such as MongoDB, SeaweedFS and worker nodes. Master node and worker nodes communicate with each other via gRPC (a RPC framework). Tasks are scheduled by the task scheduler module in the master node, and received by the task handler module in worker nodes, which executes these tasks in task runners. Task runners are actually processes running spider or crawler programs, and can also send data through gRPC (integrated in SDK) to other data sources, e.g. MongoDB.

The Master Node is the core of the Crawlab architecture. It is the center control system of Crawlab.

The Master Node provides below services:

The Master Node communicates with the frontend app, and send crawling tasks to Worker Nodes. In the mean time, the Master Node uploads (deploys) spiders to the distributed file system SeaweedFS, for synchronization by worker nodes.

MongoDB is the operational database of Crawlab. It stores data of nodes, spiders, tasks, schedules, etc. Task queue is also stored in MongoDB.

SeaweedFS is an open source distributed file system authored by Chris Lu. It can robustly store and share files across a distributed system. In Crawlab, SeaweedFS mainly plays the role as file synchronization system and the place where task log files are stored.

Frontend app is built upon Element-Plus, a popular Vue 3-based UI framework. It interacts with API hosted on the Master Node, and indirectly controls Worker Nodes.

Integration with Other Frameworks

Crawlab SDK provides some helper methods to make it easier for you to integrate your spiders into Crawlab, e.g. saving results.

In settings.py in your Scrapy project, find the variable named ITEM_PIPELINES (a dict variable). Add content below.

Then, start the Scrapy spider. After it's done, you should be able to see scraped results in Task Detail -> Data

Please add below content to your spider files to save results.

Then, start the spider. After it's done, you should be able to see scraped results in Task Detail -> Data

A crawling task is actually executed through a shell command. The Task ID will be passed to the crawling task process in the form of environment variable named CRAWLAB_TASK_ID. By doing so, the data can be related to a task.

Comparison with Other Frameworks

There are existing spider management frameworks. So why use Crawlab?

The reason is that most of the existing platforms are depending on Scrapyd, which limits the choice only within python and scrapy. Surely scrapy is a great web crawl framework, but it cannot do everything.

Crawlab is easy to use, general enough to adapt spiders in any language and any framework. It has also a beautiful frontend interface for users to manage spiders much more easily.

If you feel Crawlab could benefit your daily work or your company, please add the author's Wechat account noting "Crawlab" to enter the discussion group. Or you scan the Alipay QR code below to give us a reward to upgrade our teamwork software or buy a coffee. 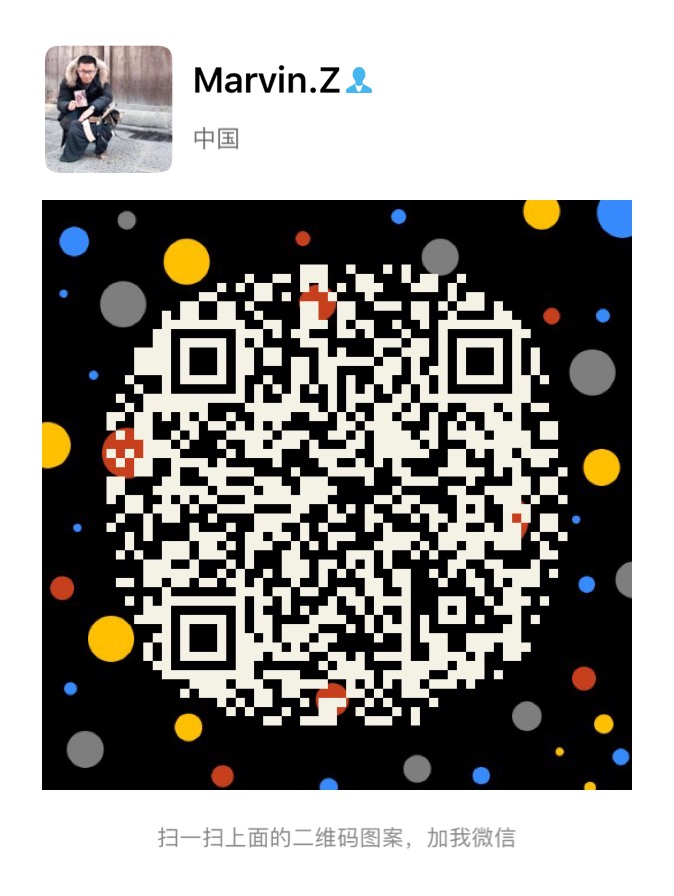 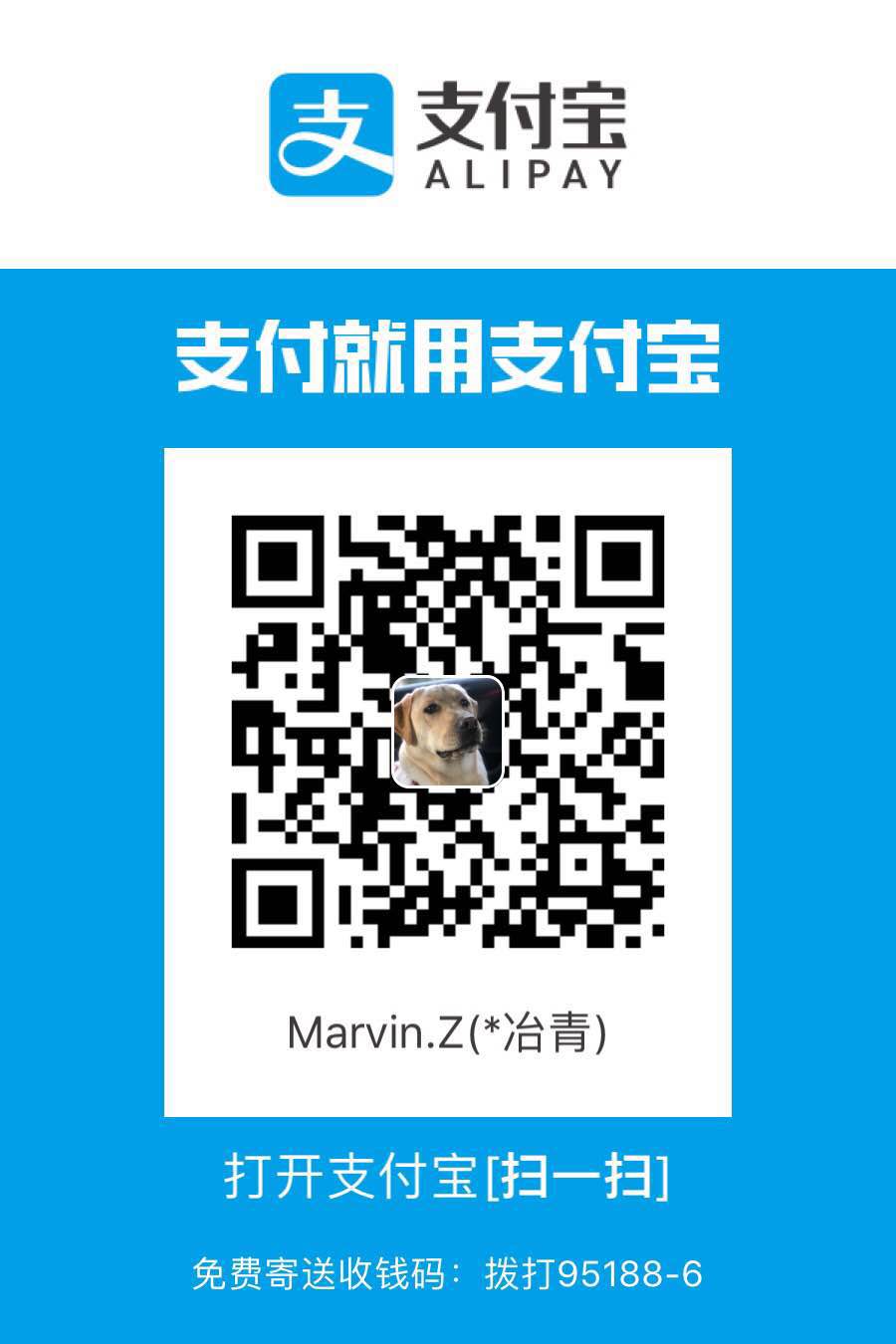