cr is a job executor concerned with achieving the highest parallel execution possible.

Given a definition of jobs and their dependencies, it builds a graph that outlines the execution plan of these jobs.

For instance, consider the following plan:

This plan states that we have 3 jobs to be executed: SayFoo, SayBaz and SayCaz but the last two jobs must only be executed after the first one and in case it succeeds.

To visualize the execution plan we can run it with --graph, which validates the plan and prints out a dot digraph. 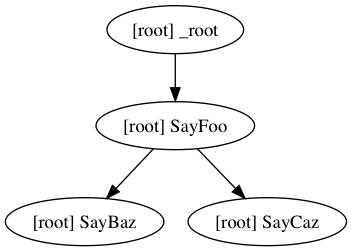