Carrot is an easy-to-use, real-time framework for building applications with multi-device AR capabilities. It works using WebSockets, Golang, client libraries written for iOS, and a unique location tracking system based on iBeacons that we aptly named The Picnic Protocol. Using Carrot, multi-device AR apps can be created with high accuracy location tracking to provide rich and lifelike experiences. To see for yourself, check out Scribbles, a multiplayer drawing application made with Carrot. You can see a demo video here and the code here.

Bellow is a high level design of the Carrot framework. More detailed diagrams will be provided when time permits.

Building an application with Carrot

Building applications with Carrot is incredibly simple. Check out this echo application that echos a payload from one device into the AR space of all connected devices:

The example above ommits extra functionality to showcase the basic components required to connect carrot to your application. The required components are the following:

Controller methods receieve requests and broadcast responses to clients. Requests can be passed as-is, demonstrated with the CreateDefaultResponse method above, or information can be appended before responses are broadcasted.

To make the framework interact with platform-specific code, developers will need to implement the Carrot client framework. Currently, only iOS support exists. To see how to do so, visit the carrot-ios repository https://github.com/carrot-ar/carrot-ios

The Picnic Protocol (patent pending) is a set of rules and standards that provide a way for devices to communicate local AR events as well as understand foreign ones. More specifically, however, it relies on both decentralized and centralized network topologies in order to solve the problem of understanding events that happen in foreign coordinate spaces. The protocol's "handshake" begins by designating the first device to join the session as the primary device. The primary device has two responsibilities: 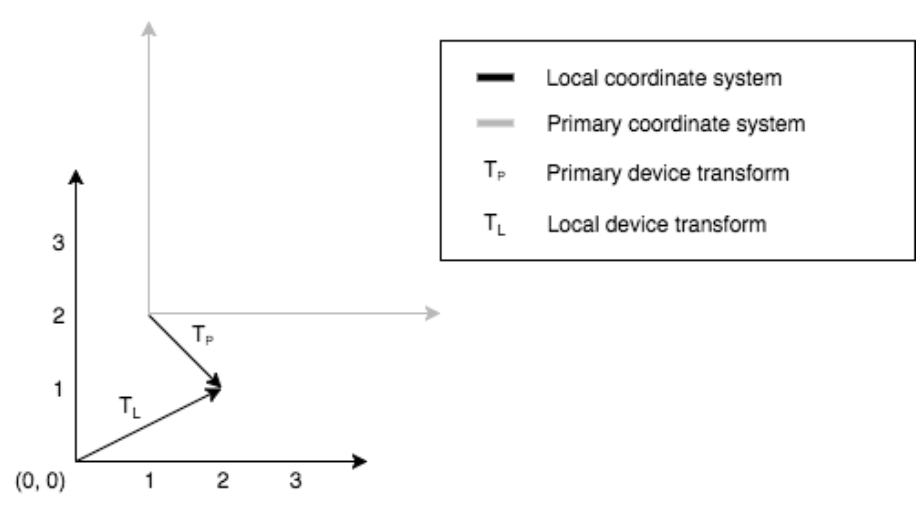 This is the core of protocol. Clients are responsible for being able to send and receive the immediate ping and the server is responsible for maintaining the TL and TP relationship for every authenticated device in the network, as well as converting the locations in messages themselves before broadcasting them to clients. 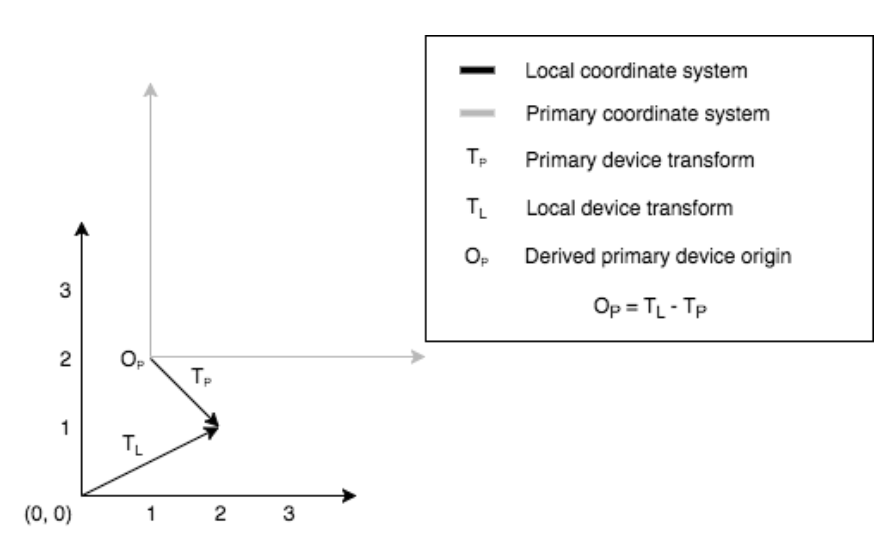 The calculation of OP, which is the vector resulting from the difference of TL and TP. Visually speaking, OP can be calculated by “walking along” TL and then walking in the opposite direction of TP. Being able to derive OP via this relationship allows the server to convert a coordinate that originated in the coordinate system of a secondary device to one that is now relative to the origin of the primary device. This equation can be applied a second time over in order to do secondary device to secondary device conversions.

The protocol is a platform-agnostic way of performing coordinate conversion. It was designed specifically for multi-device augmented reality on mobile devices though, and is well tailored for that use case. The only thing it requires devices to have, however, is the ability to connect to a network. Although Bluetooth and iBeacon technologies were chosen as the way to do inter-device communication in the iOS framework, one can imagine this happening over something like a P2P network instead, for example. 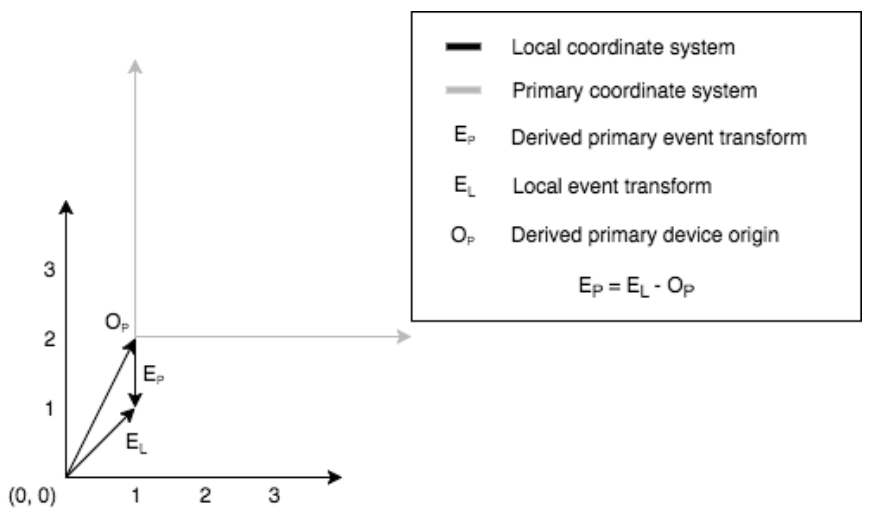 Carrot has two message types: request and responses. These are represented by the []byte type.

The structure of messages are identical, so the two types of messages represent the opposite directions (and ultimate paths) data travels. Requests and responses are in the form of the following JSON:

In order for a client to send messages to other devices, a route must be defined so the server knows the destination controller and method to handle the incoming requests. Consider this example application snippet:

In order to send a message to this endpoint, all we need to do is specify the endpoint in our request. A request to be sent to the endpoint defined above could look something like this :

If this request is sent to the server over the WebSocket connection established, it will create a new instance of the ExampleController and route the message to the PrintFooParameterToConsole function. Inside the function, we will log the value of the foo parameter to the server log.

Once the request reached its intended controller method, it has reached the end of its life cycle.

Clients can expect to receive responses from Carrot. Assuming the request is not explicitly modified in the developer-defined controller, then the response should be exactly the same as the request.

In the case that the developer wants to modify requests before the devices are broadcasted and recieve these responses, custom responses can be built.

There are two different types of responses: default and custom.

As you can see above, the contents of the request received by the controller are dumped into the generating the contents of the new response. Behind the scenes, the JSON representing the message stucture is created and returned as a []byte ready to be broadcasted. Once created, a default reponse cannot be modified. This option is therefore used for sake of brevity in relevant use cases.

The first two functions define the contents for all of the fields that are copied from the request.

The next and most interesting functions to note are the AddParam and AddParams functions. They allow the developer to append key-value pairs to a custom response.

Finally, a custom response must be packaged into a JSON object.

The resulting message is ready to be broadcasted to clients and can no longer be modified.

The broadcast module, available in all controller implementations, has a few options for narrowing down which clients to send a message to. Since all clients have a session associated with them, there is a 1-to-1 relationship between sessions and clients. Thus, every client has a SessionToken which is accessible within the client and within the session store internal to Carrot.

Broadcasting to all clients

Broadcasting to a subset of clients

One way to make the best use of this feature is to keep sessions associated with users in a datastore connected to carrot. Then, a simple query can return a set of sessions that should be sent a response. Here is some pseudocode demonstrating this:

Once the response reaches its intended recipient(s), it has reached the end of its life cycle.

Maintaining the state of clients are done using sessions inside of Carrot. Due to the shared, concurrent access of sessions throughout the lifecycle of a request, they are stored isnide of Golang's sync.Map. An interface is provided such that future extensibility could be easily integrated into Carrot to allow session storage within in-memory data stores like Redis.